Generally speaking this correspondent doesn’t get to write about mainstream superheroes. For all of the fighting the capes and tights crowd does (and all of their wars, both secret and civil), most of the time they stay in their own genre. Trust Garth Ennis to change that, and to take the opportunity to retcon a hero’s origin story and turn it into a war story, which is exactly what he, Darick Robertson (pencils), Tom Palmer (inks), and Paul Mounts (colors) have done with Marvel Max’s The Punisher: Born. Originally published as a four-issue series titled Born in 2003, and in trade form in 2004 and 2007, Marvel reprinted Punisher: Born in May of this year. The story takes place in the fall of 1971 on a US Marine Corps firebase in South Vietnam near the Cambodian border. The war is winding down, and everyone knows it. 1971 saw the conviction of Lt. James Calley for murder of civilians in the village of My Lai; the publication of the Pentagon Papers revealing an ongoing policy of deception about US policy in Vietnam by the military and executive branch, including secret and illegal invasions of both Cambodia and Laos; and the continued withdrawal of large numbers of American troops in preparation for a complete withdrawal in the relatively near future.

In Ennis’s tale, no one wants America in Vietnam anymore: not the American government and people back home, not the grunts at Firebase Valley Forge, not the military brass, and most definitely not the North Vietnamese. Everyone’s marking time until America’s second longest war finally winds down. Everyone, that is, except special forces operative par excellence, sniper, black ops specialist, assassin, and predator Captain Frank Castle, who has found the war to be his truest home. Captain Castle doesn’t want the war to end. He’s no true believer or domino theorist; he’s just fallen in love with war, and is supremely good at it. Now, Captain Castle hears a dark voice that claims to be able to make his war last for as long as he wants it to – all he has to do is say the word. Of course, as with all such voices, agreeing with this one comes with a price. 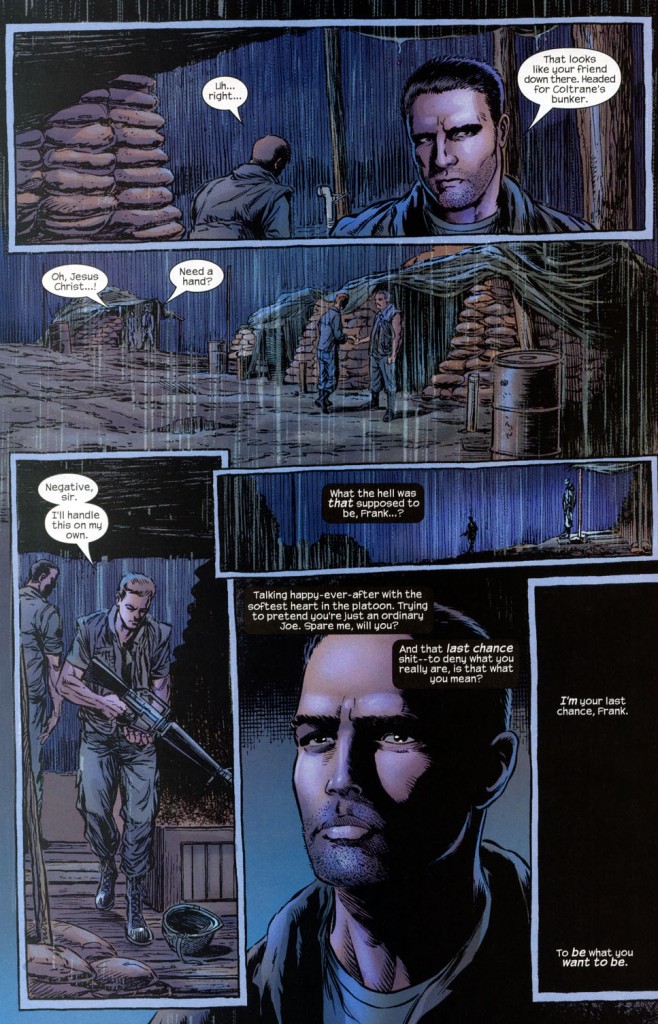 Punisher: Born is Ennis at his best, his writing lyrical, cutting, and razorwired with dark humor and social commentary. His origin story for the Punisher is much darker, more disturbing, and ultimately more believable than the character’s usual one of revenge for his slaughtered family. Working in Marvel’s mature readers Max line also allows Ennis to get full use from his palette of graphic violence, and the human depths of depravity, innocence, cynicism, ridiculousness, hopes, and fears. 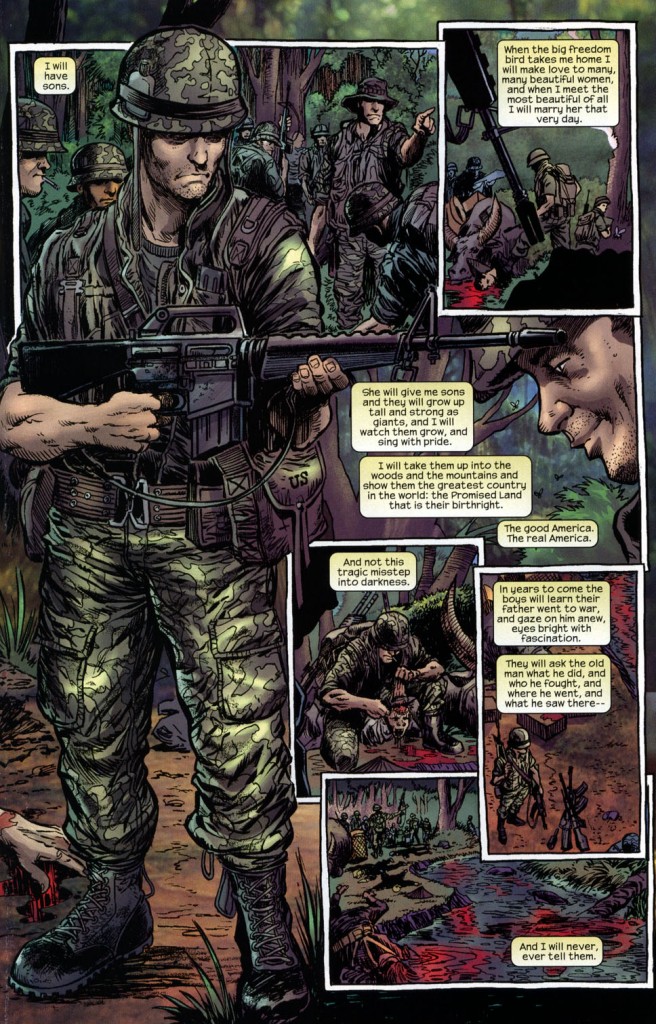 Robertson and Palmer take a realistic approach to the art, with a finely tuned eye for motion, and for faces in emotional extremes. Their firefights are sudden, chaotic, and horrific, and their work on the final Battle of Firebase Valley Forge would make Sam Peckinpah weep for joy. What makes the art really work for this correspondent however is Paul Mounts’ coloring. A master of mood and lighting, Mounts drawn the reader in to a Vietnam as shadowed as the story unfolding in Ennis’ tiny corner of it, where it is always raining, cloudy, night, just jungle-dark, or the painful, somehow hellish reds and deep oranges of fire and flarelight. This is contrasted with the bright golds and warm oranges of the World, the good ol’ US of A, as it appears in dreams and in Castle’s ultimate return to the States. Mounts colors bring the mud, blood, beauty, and terror of Vietnam to visceral life, and helps to anchor the story as it moves through time and space in a manner both effective and unnoticed.

The Punisher: Born is a bloody tale, told with tremendous soul and just enough foreknowledge of the character’s ultimate future to add spice without getting cute. The weapons, uniforms, and settings are meticulously researched and highly accurate, and the mood of the piece is just right. Ennis manages the difficult job of crossing superhero with historical reality with tremendous skill and not a little grace, making the book a must have for any war comics collection. 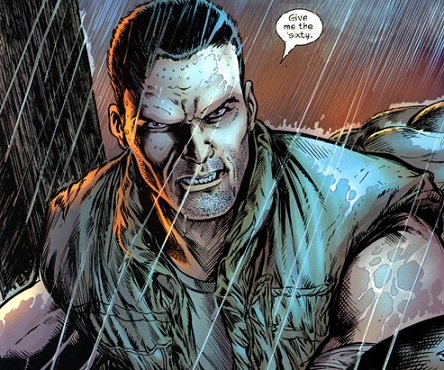