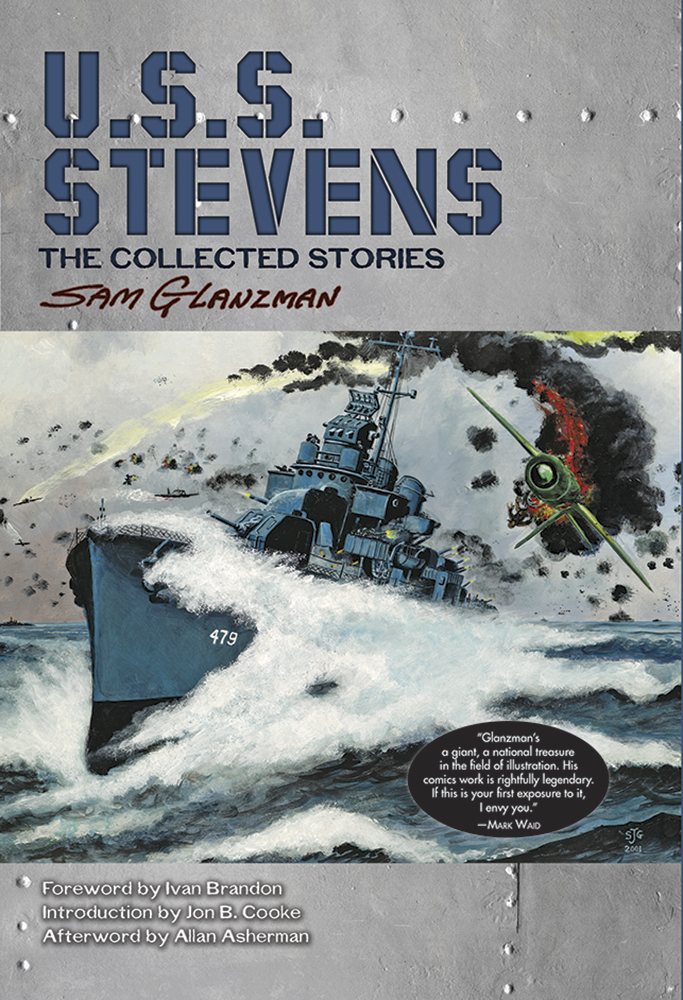 Sam Glanzman’s USS Stevens: The Collected Stories (Dover Publications, 2016) is more than a collection of some of the finest naval war comics ever produced, it is also an incredibly valuable historical document written and drawn by someone who was both a witness and a participant in many of the events described. This December, Sam Glanzman will be 92, but in December of 1942 he had just turned 18, and joined the US Navy almost exactly a year after the Japanese attack on Pearl Harbor. After boot camp, Sam joined the crew of DD479, the Fletcher-class destroyer USS Stevens, on which he would serve until the war ended in late 1945. Along the way the Stevens would participate in in 16 different naval operations in the Pacific Theater, destroying 14 Japanese planes, including some engaged in kamikaze attacks against the ship, and the ship was awarded three commendations. While Glanzman was aboard, the Stevens undertook shore bombardment missions and close naval fire support for amphibious landings and troops ashore at Marcus Island, Tarawa, Kwajalen, Kavieng, Tanamerah Bay, Humbolt Bay, Guam, Morotai, Leyte, and Klandasan to name just a few. She ran enemy mine fields, chased subs, rescued seamen, endured the kamikazes of Okinawa, and operated as part of the screens for various carrier task forces and groups. In short, the Stevens was an American destroyer in World War II, one of the famous “Tin Cans,” small, fast, fragile, and capable of taking on a variety of missions and operations, some of which had never been envisioned by her designers. 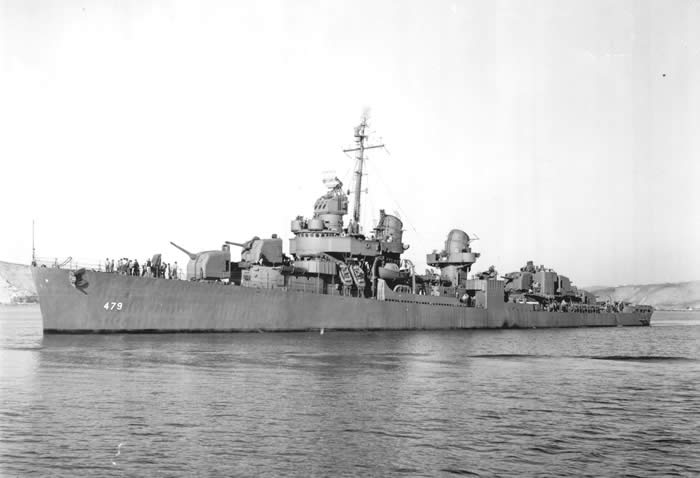 DD479, USS Stevens off of Mare Island in December of 1943. Sam Glanzman would have been serving aboard when this photo was taken.

Against regulations, Glanzman kept a journal of his time aboard the Stevens, complete with sketches and finished artwork illustrating the ship, her crew, and the events and sights he saw during his tour of duty. After the war, he became a professional illustrator, and eventually took a job drawing comics for Charlton Comics in 1958. There he became known for his work on Carleton’s historical war comics, producing detailed, accurate illustrations and stories. By the mid-1960s, Glanzman was regularly freelancing for Charlton and Dell working largely on war comics like Dell’s Combat, but also branching out to do fantasy work on titles like Tarzan, and co-created (with Joe Gill), Adventures of the Man-God Hercules, in which, freed from the need for historical accuracy, Glanzman was able to stretch his artistic muscles, creating a comic that was highly stylized and experimental for the time. In war comics, working with Will Franz, Glanzman co-created the legendary “The Lonely War of Willie Shultz” for Charlton’s Fightin’ Army. 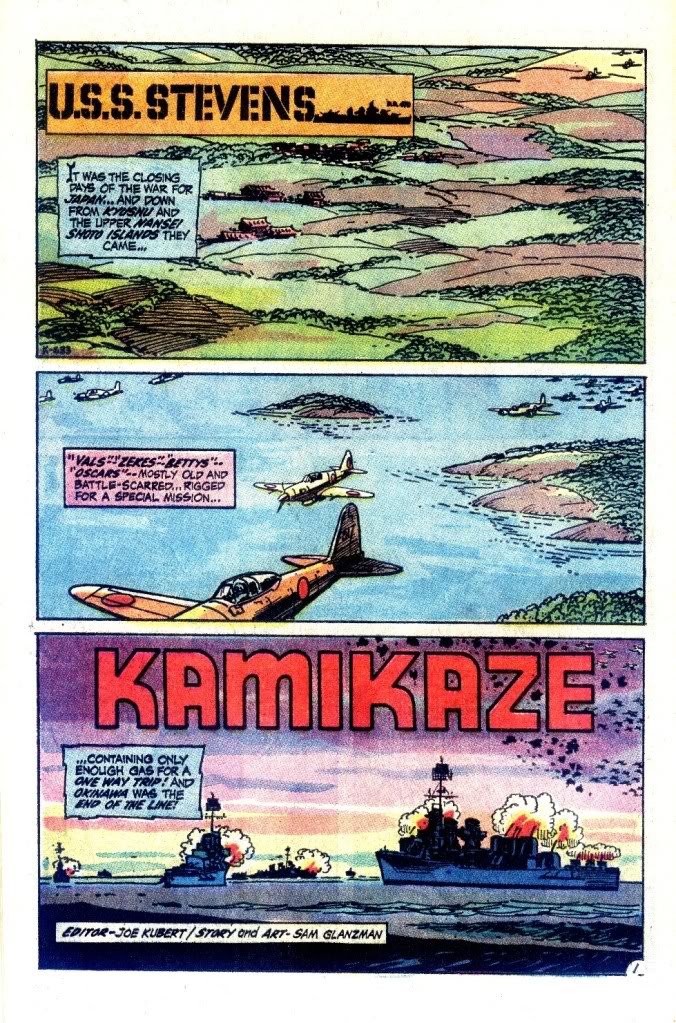 All this time, his wartime journals and experiences on the Stevens lay largely untouched save as reference material when drawing other stories (fictional and non) set in the war. Until, that is, late 1969 when Glanzman joined DC’s stable of regular freelancers under the editorial auspices of Joe Kubert. The first USS Stevens story, “Frightened Boys… Or Fighting Men” appeared in Our Army at War 218, cover dated April 1970. A four-page tale, “Frightened Boys…” was still something different, something special. A simple story of a group of newly assigned sailors undergoing their baptism of fire aboard the Stevens during a kamikaze attack, in four pages, Glanzman caught the terror, the courage, and the desperation of these terribly young men at war, with the story flowing from panel to panel with a grace and easy fluidity that would become a hallmark of Glanzman’s work. Despite becoming the primary illustrator for DC’s G.I. Combat’s “Haunted Tank” stories, it would be these small back-page stories that would cement Glanzman’s place as one of comics’ greats. Glanzman would write Stevens stories for DC regularly through 1977, and would return to the ship and her crew again and again in the 1980s for Marvel’s Savage Tales. In 2013, Kubert would ask Glanzman to revive the Stevens for what would be Kubert’s last work Joe Kubert Presents, insisting that Glanzman was one of the finest artists Kubert had ever known. 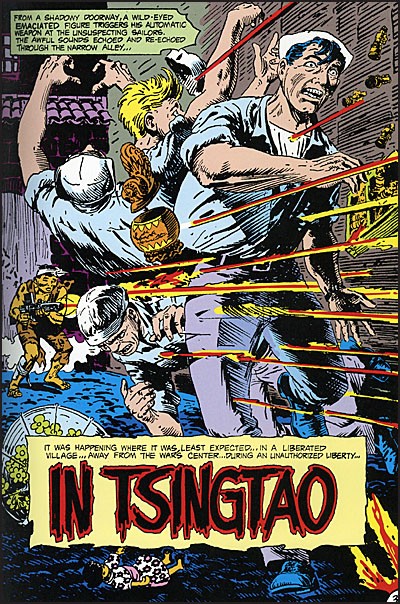 Final page of “In Tsingtao” from The USS Stevens: The Collected Stories, p. 73. Script and art by Sam Glanzman.

Now, for the very first time, every single Stevens story, as well as some of those original journal entries and other errata have been gathered together in one volume, and it’s simply gorgeous. Coming in at a hefty 400 pages, Dover Publications has produced the kind of hardcover collection that Glanzman’s work so richly deserves. Heavyweight paper, restored color, sewn binding with cloth covered boards embossed with the silhouette of the Stevens under a heavy dustjacket, this book is one of the highest quality publications it has ever been my pleasure to hold. Seriously, Marvel charges $100+ for omnibus editions that aren’t as well put together as the $39.99 USS Stevens: The Collected Stories. As lovely as all of that is, however, the true treasure is what is on those pages, and that is one of the most honest depictions of what wartime life was like as a Tin Can Sailor: the beauty, the fear, the pain, the confusion, the noise, the death, the strange and sometimes sublime realities of war at sea. According to Glanzman, the Stevens tales are about 80% true, coming both from events he personally witnessed, those he was told about by older crewmen, and those he learned about that involved other ships. 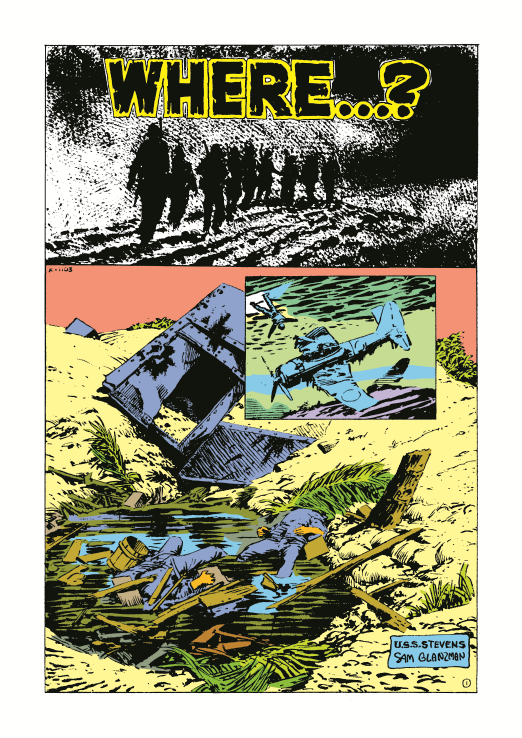 Opening page of “Where…?” from The Collected Stories p. 191, art and script by Sam Glanzman.

What remains so powerful about these stories is their very simplicity. These are all views from the deck (or gun mount or fire room), stories about regular sailors in the midst of extraordinary events, men who really have no idea about larger pictures or grand strategy, but who are focused on this attack, this operation, that torpedo-bomber, this submarine. Glanzman’s writing and art provide an immediacy that prevents the USS Stevens yarns from getting bogged down with the weight of larger history as do too many historical comics. It is worth remembering that ships like the Stevens were commanded by Lt. Commanders, not full Captains and certainly not Admirals, and even at that rank the CO was in a different world from the “swabbies.” And it is the stories of those “swabbies” that Glanzman tells, and tells so well from among their number. Through it all, his compassion and often outright love for the men he served with shines through every panel, so that the reader feels how important it is to the artist to tell their stories and get them right.

Whether or not you are a war comics fan, you should get USS Stevens: The Collected Stories. The book is merely a slice of Glanzman’s career, but it is a beautifully printed and bound collection of the work of one of comics’ true greats, and a profoundly moving memoir of the young men who served day in and day out during the most horrific conflict the Earth has ever known. The work is beautiful, compelling, and terrible in its subject matter. It is, in the final analysis, a master work, and a long overdue recognition of a creator whose work influenced generations of writers and artists, and who, once upon a time, helped save the world. Thanks, Sam. We owe you more than we can ever repay.