White Death is a true classic of the war comics genre, and a beautiful example of the power of comics as an art form capable of telling stories that bring history to immediate, visceral life no matter how deep the forgetful snows may be.

One hundred years ago today (21 January 1916), Imperial Russian forces resumed offensive operations against Imperial German forces in eastern Poland, while the Indian soldiers of the Imperial British Indian Expeditionary Force D were driven back by entrenched Imperial Ottoman troops at Um-el-Hanna. From the Baltic Sea to the Persian Gulf, the empires of Europe and the Near East were at war, and 1916 would see the world drawn into a maelstrom of horror greater than any previous conflict in human history. 1916 gave bloody birth to the Battle of Verdun (21 February – 18 December) and the Battle of the Somme (1 July – 18 November). Together, these two battles alone would total some 1.8 million casualties, a number which leaves out the fighting on the Eastern, Southern, and Asiatic and Egyptian fronts, as well as all naval casualties in a year that also saw the Battle of Jutland (31 May – 1 June).

In January of 1916, there were still almost three years left in the war.

Beginning in 2014, many nations have been marking the 100th anniversary of the Great War, leading to a welcome remembrance of the conflict and those who fought it, particularly when it comes to some of the less well known combat theaters. As part of this resurgence of interest, Image Comics reprinted White Death, written by Robbie Morrison with art by Charlie Adlard. White Death is set in along one of those forgotten fronts: the Italian Alps. After joining the war on the Allied side in 1915, the Italian Army moved against Austria-Hungary along the extraordinarily mountainous border between the two nations in an offensive that quickly bogged down into trench warfare. Unlike the Western Front, however, the trenches were often separated by hundreds of vertical yards, and combat took place at elevations up to 3678 meters (12,066.9 feet) above sea level. The men in these trenches were usually natives of the region, and as the territories they were fighting over had historically moved from being Italian to Austrian and vice versa more than once, they often knew each other. They also knew the mountains and the snow, and thus added another weapon to their armories: the avalanche. Using heavy artillery and mortars, both sides caused deliberate avalanches in attempts to bury their opponents. Indeed, over the course of several days in December of 1916, an estimated 10,000 Austrian and Italian soldiers were killed in avalanches caused by a combination of the fighting and natural occurrences. 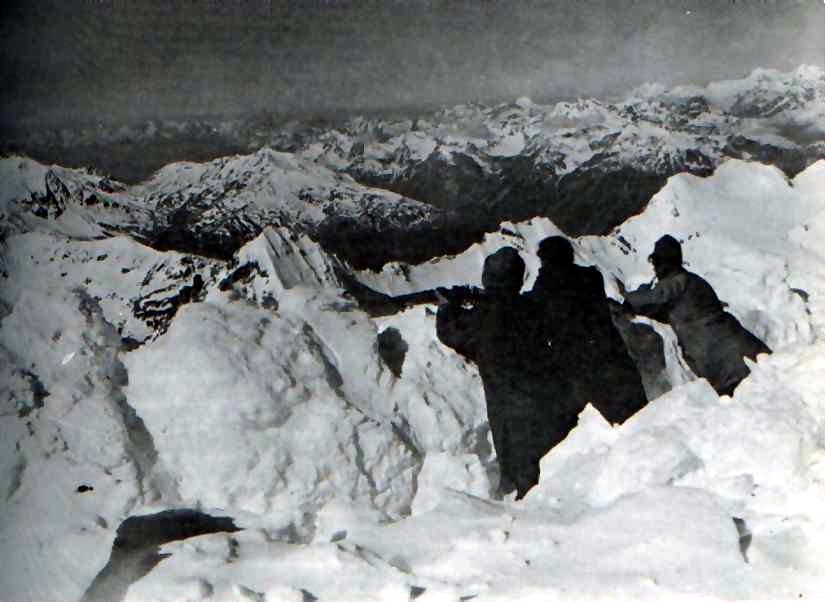 Loosely based on the Battles of Isonzo (twelve in all from June 1915 – November 1918), White Death tells the story of Pietro Aquasanta, an Italian native of the Trentino region, who was living across the border in Austria in 1915, when he was conscripted into the Austro-Hungarian Army only to find himself fighting against fellow Italians when Italy entered the war later in the year. He was captured, and offered the chance to join the Italian Army rather than become a POW. As the book opens, Pietro finds himself back home in the Trentino, fighting former neighbors in Austrian uniform, and under the command of the murderously ambitious Sgt. Major/brevet Lieutenant Costanzo. Pietro begins with his own innocence lost, finding an old comrade from his days in the Austrian Army on the end of his bayonet after a confused and brutal melee in the driving snow. His first task when his squad reaches the sector commanded by Costanzo is to reinforce the trenches in expectation of an enemy attack using the only material available: the frozen bodies of the fallen, a construction material Pietro knows all too well is being used by both sides. 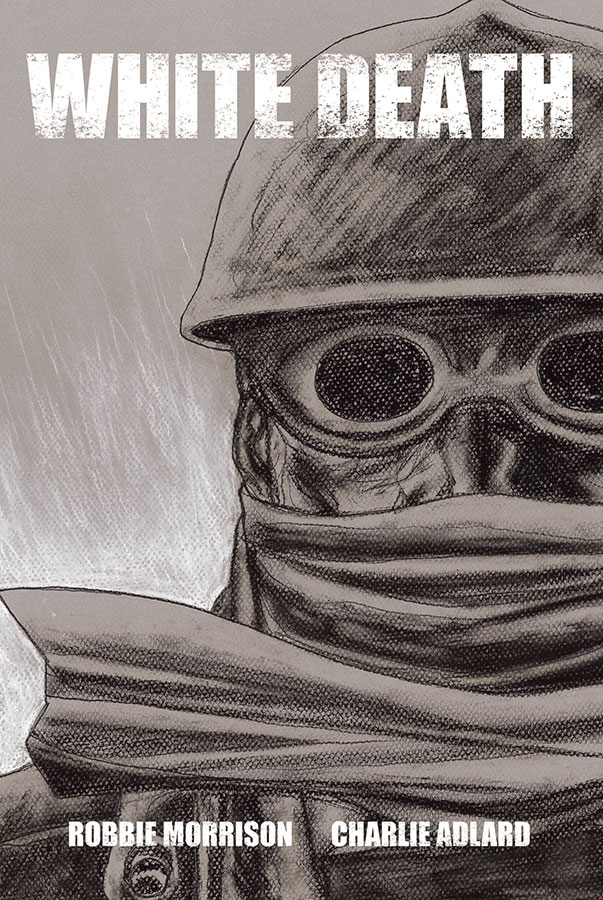 Cover for the 2014 Image Comics edition of White Death. Art by Charlie Adlard.

The themes of the story are the usual ones from the Great War, innocence lost, corruption and incompetence in the command structure, and seemingly endless death for a matter of yards – at best. As Pietro hardens, his comrades find their own innocence under overwhelming assault. One loses both his legs, the other survives, but the reader sees him progress from a naive young virgin at who teeters on the edge of love for the prostitute who takes his virginity at the military-approved whorehouse behind the front, to a callous man who silently takes his pleasure and wordlessly tosses crumpled bills at the same woman as he leaves. The book begins ugly and only gets uglier. Throughout it all, Pietro manages to hold onto his humanity, and he is contrasted with Costanzo, who has given his up in order to survive and climb the ranks until he can be one of the officers who sit and plan in requisitioned villas miles from the fighting – no matter how many bodies he must climb over to do so. White Death is a brutal story, and a brilliant one.

Charlie Adlard’s artwork is a brilliant use of materials and negative space throughout. When he and Morrison first began to talk about White Death Adlard was experimenting with the use of charcoal and chalk on grey paper, and decided to use this technique for the story. Set in a world of ice and snow, the use of white chalk on grey paper gives the weather an immediacy that would have been lacking on white paper where the element’s would have been the negative space. The snow and ice is imposed on the paper, and on the characters themselves, whose skin and uniforms are the grey of the paper itself, defined by pencil outlines and charcoal shadows. Thus, Adlard’s snow can very actively cover, and his blizzards bury. He is also very deliberate with his choice of paper textures, switching from a very fine, smooth surface to one so rough that it is almost corrugated, an effect that lends the splash pages done on this texture the visual feel of photographs from the era, and also serves to add a three dimensional element to the two-dimensional format. His style is generally realistic for people, but becomes progressively more impressionistic when it comes to backgrounds and weather, and where he uses the rough-textured paper; the effect is almost negatively pointillist. 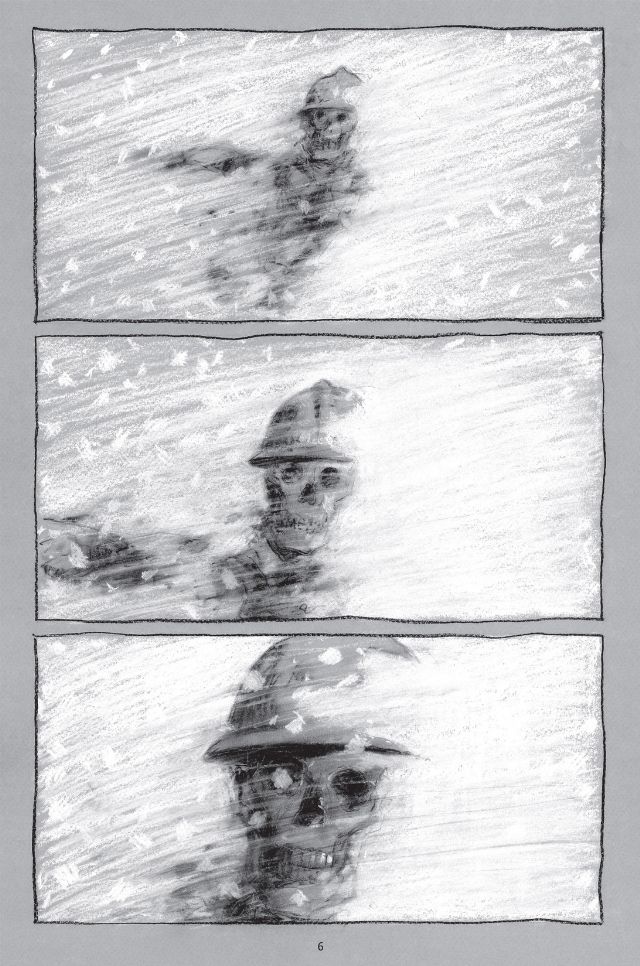 Above all, Adlard’s choices capture wonderfully the greyness of the world inhabited by the characters, the dirt, grime, blood, and old mud churned up by the war. Morrison and Adlard never shy away from the base realities of the war – there are no Easy Co. moments here, where men can charge into machinegun muzzles with miraculous impunity. Panel to panel the reader is left with the uncomfortable feeling that the continued survival of the main characters is a matter of chance at best, an effect that is just incredibly hard to pull off in any storytelling medium. In this correspondent’s opinion, this book has never received the attention it deserves, although Image’s reprinting of the book in hardcover format is a good beginning. White Death is a true classic of the war comics genre, and a beautiful example of the power of comics as an art form capable of telling stories that bring history to immediate, visceral life no matter how deep the forgetful snows may be.