World of Tanks: Roll Out! #5 provides a great end to the limited run, with plenty of action and a beautifully realized, unexpected dose of sharply-edged pathos that elevates the entire series into a powerfully realized commentary on the realities of war. 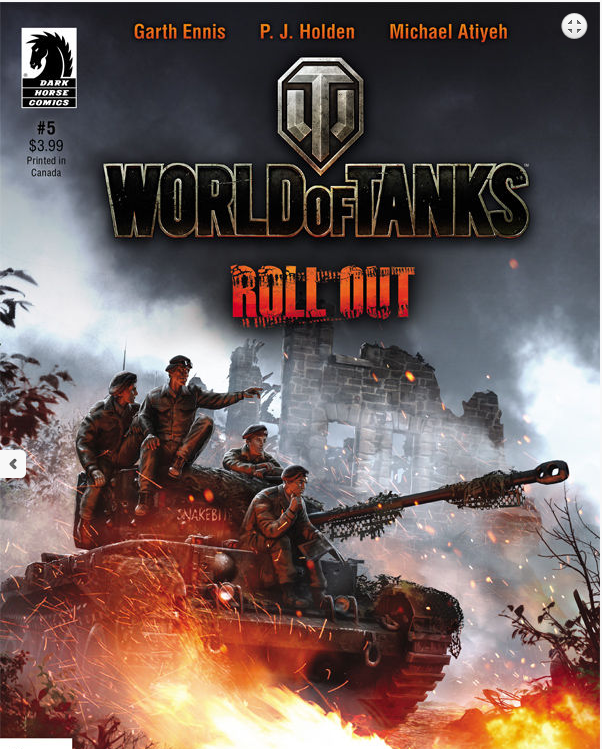 World of Tanks: Roll Out! #5 marks the end of Dark Horse Comics and Wargaming.net collaboration. For the most part, World of Tanks has been about what you’d expect from a comic based upon, and at least in part intended to advertise, an online wargame centering around blowing up tanks: combat, explosions, burning tanks, and dead tankers. Nonetheless, Garth Ennis’ writing, with no little assistance from the artwork of Carlos Ezquerra and P.J. Holden (who took over penciling duties from Carlos Ezquerra with issue 3), has elevated the series from extended game advertisement to a book with humanity, humor, horror, and several points to make. 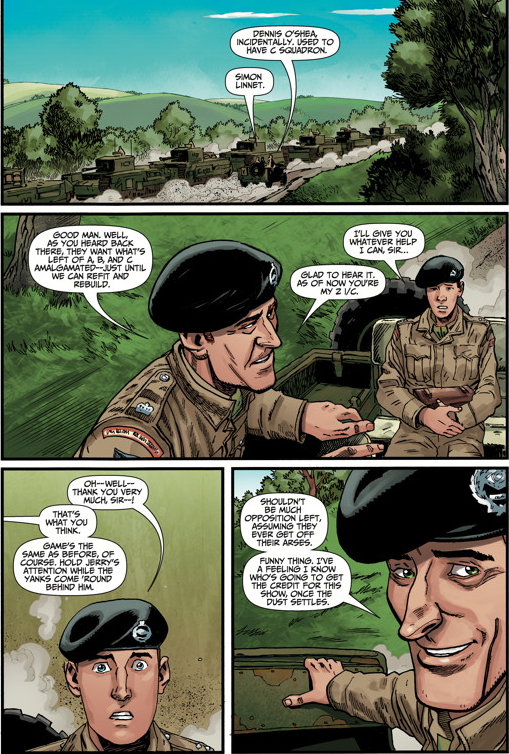 First and foremost, Ennis and Holden underline the fact that, while the Allies certainly outdid the Germans in quantity of equipment, quality was another issue, with Sherman, Cromwell, Stuart, and Crusader tanks that were the mainstay of the Allied forces being out armored and outgunned by German Panthers and Tigers. Added to these disadvantages were the superior training, flexible tactics, and often combat experience of the German forces in Normandy. The resulting Allied learning curve would up costing a lot of lives. As Ennis and Holden point out in WoT #5, the solution applied to this problem was usually artillery and aerial bombardment. Allied ground forces couldn’t dislodge the Wehrmacht from a town; the Allies would often just pound it into rubble with indirect fire and fighter/bombers. Artillery shells and bombs were readily available in vast quantities, and the Allies used them profligately throughout the war. 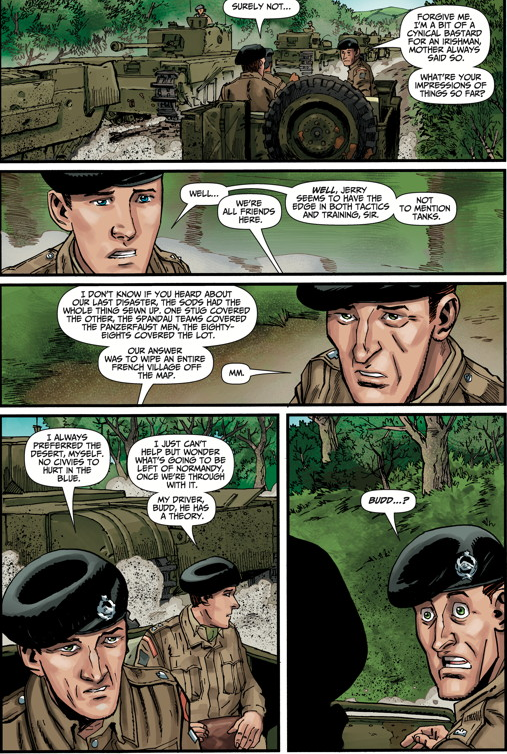 This becomes the surprise punch of this final issue, as an older Frenchman and his blind granddaughter, who befriended the crew of the Cromwell tank “Snakebite” last issue (after they unknowingly killed and ate the girl’s pet chicken) are blasted out of their homes by the “liberating” Allies. As the Frenchman says of the town, “our home was there until the invasion. After that, we had for walls. Now we have a cellar.” To make matters worse, the targets of the shelling, two self-propelled guns, had actually been destroyed by the “Snakebite” and its crew, but too late to countermand the bombardment order. It is a sudden and powerful reminder (despite the use of the little blind girl trope) that in most wars, and particularly in the European theater of World War II, it often didn’t matter who was fighting or who won, because the civilians were almost always certain to lose.

The final issue also gives the reader the inevitable clash between the British Tankies and the Panther grew of “good Germans,” and gives Ennis the opening he needs to crank up the drama by bringing in the Waffen SS’s deliberate slaughter of surrendered Allied soldiers during the Normandy fighting, which leads to a tense showdown in the final pages of the book. In the final two issues, Ennis and Holden have lifted this series from being a solid war comic to one that really has something to say about war and the people who get caught in the middle of it, be they soldier or civilian. They pull off a delightfully sudden shift of focus that nonetheless feels completely natural while delivering a nice punch to the reader’s gut, reminding us that while you can have a blast playing World of Tanks the game, the reality of the war was something far, far removed from anyone’s idea of “fun.”

World of Tanks: Roll Out! #5 provides a great ending to the limited series, with plenty of action, and a beautifully realized, unexpected dose of sharply-edged pathos that elevates the entire series into a powerfully realized commentary on the realities of war. Go buy it when it hits the stands on February 8 and look for the trade collection in April of this year.