It’s no secret that we at FreakSugar are big fans of the podcast We Hate Movies, which reviews “bad” films (although, as cohost Eric Szyszka says, “It’s okay to like a movie), mostly affectionately and in good fun. Between the free content they release weekly and what they produce on their Patreon feed—including reviews of movies they love and looks at series such as Melrose Place and Beverly Hills 90210—hosts Szyszka, Andrew Jupin, Chris Cabin, and Stephen Sadjak give us a wealth of content every month. 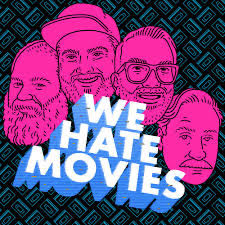 And starting next week, the WHM crew is back on tour once again, hitting the road to play to audiences who love the show to perform live! Check out the whole schedule and locations where you can watch the gang live!

For tickets, check out WHMpodcast.com/tour!

And for folks who want to listen to all their content, the free feed is at WHMpodcast.com, which bonus content over at Patreon at Patreon.com/WeHateMovies.