Z2 Comics looks to be making a push for the last third of 2015 to be its time in a very big way. With the production of a whole host of monthly periodicals, it will be releasing books such as artist and writer Chris Hunt’s Carver: A Paris Story. As Mr. Hunt says, with Carver, he brings a modern-day sensibility to a well-known archetype, peering at that archetype in the process.

Carver has the right mix of noir aesthetic, nods to classic cinema and hard-boiled literature, and 21st wordsmithery that combine to make for a wonderfully engaging tale. Mr. Hunt was kind enough to speak with about Carver, his influences on the story, his work with Z2 Comics, and how Ernest Hemingway finds his way into the makeup of the story’s protagonist Francis Carver.

FreakSugar: What can you tell readers about your background in comics?

Chris Hunt: I’ve been working towards the goal of being a comic book professional for about ten years now. It took about six years before I was able to start getting paid work. I mostly just self-published while I was still living in Boise, Idaho, working at upping my game however I could. The most significant moment in that development was when I was given the opportunity to work alongside Paul Pope at a residency he helmed at The Atlantic Center for the Arts in 2010. Since arriving in New York City almost two years ago, I’ve worked for Vertigo, Black Mask, IDW, AMC, Universal Music Group, not to mention Z2 Comics. It’s been a journey, both personally and professionally, and it’s that journey that makes Carver the story it is — one about a man trying to help the only woman he’s ever loved, and find his way back to himself in the process. Despite A Paris Story being my first creator owned comic with a publisher, I feel like it’s a project I’ve been preparing for my whole life.

FS: What would your elevator pitch for Carver be?

Carver is about peeling back the onion on a western archetype, in an effort to understand where that archetype may have originated from. When you meet the main character he’s just a two dimensional protagonist, but over the course of the story you begin to learn what has driven him to wear this mask, and you start to see how deep it runs. I think a lot of people tend to wear masks in day-to-day life as a way of protecting themselves. I also think that as time goes on, the line between the mask and the person begin to blur, so much so that the mask may begin to replace the very thing it was meant to protect. Carver is an extreme example of that, but an example none the less. 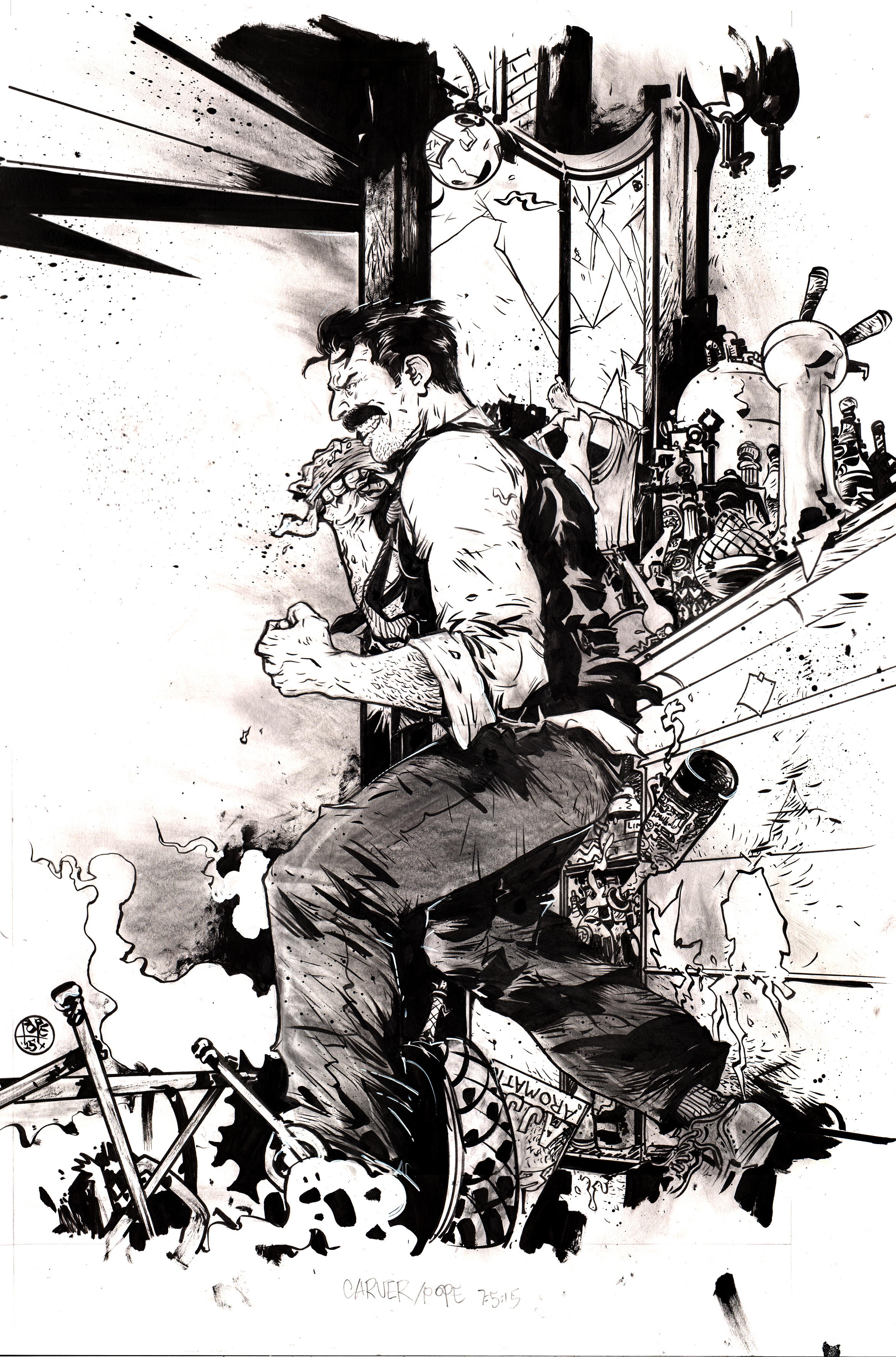 FS: How has your real-life experiences impacted how you approach Carver and his world?

CH: Initially I simply wanted to tell a hopelessly romantic story about two old lovers meeting again after a great deal of time, and it just so happened that one of them had become this “Man of Action” in the interim years. The first draft was written after I had visited one of my ex-girlfriends in France earlier in the year, and thought I was so terribly clever to write a story about a great romance set in Paris. I thought I was still “in love” at the time, and I missed her. When I wrote that first draft, I was trying to tell a story about loss, but I had yet to truly experience it. At least in the way that I know now. I lost two of my best friends the spring I had planned to start drawing the story, and my life and the nature of the story shifted drastically. I hadn’t just experienced a loss, I had lost myself in the process. I had to find my way back and Carver kind of became my life line. I was able to find myself again as I began working though my demons on the page, and that’s why Carver: A Paris Story is more a story about redemption now.

FS: How would you describe Francis Carver? How did he evolve from concept to reality on the page?

CH: There is a line in Hemingway’s short story “In Another Country” that I think best describes Carver, “He had lived a very long time with death, and was a little detached.” Francis Carver is a man in pain, and he hides it behind a mask of indifference and stoicism. I’m not trying to defend or push the notion of the Marlboro Man, or the western male, it’s just that I have known a lot of men and women who have had to put a tough face on to get through the day, and there tends to be a pretty good reason for it. Myself included. Perhaps it’s a way of defending what I’ve thought I had to do myself at certain points in my own life. Generally speaking, no one can be taken at face value. I think everyone has a story, but it’s the story that most people hide or keep close to the chest that is more honest and genuine. It also tends to contradict the narrative they’re pushing out into the world. That’s what I set out to do with this first Carver arc, to attempt to show that other story.

FS: What themes would you say are present in Carver? There seems to be a redemptive thread going there.

CH: Redemption is definitely a large part of the story. Redemption, loss, heartache, alienation. I realize that I’m not painting a very happy picture (laughs). It honestly didn’t occur to me until I started doing interviews how sad Carver tends to come off when people read it or start talking to me about it. I think Carver’s mix of darkness and adventure perfectly encapsulates life. Most people’s lives aren’t rainbows and unicorns, 24/7. There’s probably a lot of sadness in most people’s lives punctuated by moments of significance or awesomeness.

FS: I watched the Carver short a few times already. From that and the book, it’s clear you’re a fan of film noir. What would be your favorites, your go-to’s to rewatch during a free afternoon?

CH: I can’t believe that people are watching that film now! We made that as a kind of proof of concept while I was working on writing the book. Thanks for giving it a watch. Noir is definitely one of the genres I pulled from for the story, and that we wanted to push for the short. Blade Runner, despite being sci-fi, is one of my favorite noir movies. Casablanca, though not a noir film in the strictest sense, visually follows many of the rules and themes. I think my absolute favorite though is The Third Man, with Orson Welles. It’s a great story and what a gorgeous movie to watch. It has some of the most amazing location shooting, but it’s Robert Krasker’s cinematography that makes me go back to it over and over.

FS: How much is A Paris Story an expansion on Volume One?

CH: Well Volume One was my first-self published collection of shorts, that had what eventually became the first Carver story. My plan was to continue to publish those collections as I expanded the various worlds I was attempting to build. Carver’s stories would have been a part of that for sure. Volume One came out in late 2010 and my plan was to start working on A Paris Story in March 2011. It just so happened that March was when things took a turn in my life with my friends, and people started dying. A Paris Story doesn’t necessarily expand on Volume One but it does expand on that original story. As far as where it falls chronologically, that first tale definitely takes place before A Paris Story.

FS: Writer and artist Paul Pope was your mentor. How did you two meet and how that relationship evolve?

CH: Paul and I originally started talking online oddly enough, and our friendship just started evolving from there. I started traveling to New York City in 2008 and we became very good friends after that. Paul invited me to his residency at The Atlantic Center for The Arts, which was a month-long residency he was teaching, and it really was nothing short of life-changing. I met some of my closest friends there, and learned so much more about comics than I ever thought was possible in such a short period of time. Eventually when I moved to New York in late 2013, I worked as his assistant for a bit right as Battling Boy came out. Like any friendship, it’s always evolving.  Now we’ve collaborated on a Vertigo short that came out in Strange Sports Stories earlier this year, and we are planning our next collaboration right now.

FSL Who do your consider your other influences?

Without a doubt, Hugo Pratt is just as much an influence as Paul. In many ways Carver is the American version of his series Corto Maltese. IDW just started printing English editions last year and if you haven’t ever had the fortune to familiarize yourself with Pratt’s work, I highly recommend taking a look the next time you’re in a book store or comic shop. Pratt has been an influence on a number of American creators. In fact, “Corto Maltese” may sound familiar to you if you’ve ever read Dark Knight Returns, or watched the first Tim Burton Batman. It was the name of a small island nation in Frank Miller’s Batman universe, and I assure you that was no accident.

FS: You’ve been involved with Z2 for a while now. How did that relationship figure into Z2’s reinvention and renaissance and Carver?

CH: I’ve known Z2’s Josh Frankel for about six years now. We met at SDCC in ‘09 when my friend Shay Plummer and I were tagging along with Paul. I remember sitting at a table in the Hyatt bar, and this quiet guy slid a floppy across to me and told me he had written it in addition to publishing it. That was how Josh and I met. That first comic was impressive and I was surprised to see that Toby Cypress did the interior art. Immediately I wanted to know more about Josh and what he was planning. We’ve been working together since 2011, when we collaborated on a pitch. In fact, Shay ended up coloring Z2’s Escapo which I did the flatting for. We talked about the possibility of Z2 putting Carver out for a while, but I had to get through some other projects and I knew Josh was planning on making some changes. I think we both waited until the other one had a clear idea of where they were heading. It’s been a real treat seeing how much he and the company have grown in 6 years.

FS: Do you have any other ideas for Z2 you’ve pitched that you can talk about at the moment?

CH: Well nothing is set in stone. I will say that there was a story in Volume One that I teased but haven’t had the chance to work on, called “01-AD GO!” Josh and I have talked about possibly bringing that to the Z2 family but really right now, my focus is on Carver.

Carver: A Paris Story hits stores on November 11. If you’re interested in ordering the book, the order code is SEP151762.