There’s something about the Predator concept, first seen three decades ago in the first Predator film, that taps into fans’ curiosity on a visceral level. It could be the alien’s iconic design that mixes equal parts fearsomeness and the borderline-grotesque and that cuts a terrifying silhouette. The tracker’s brutal efficiency and seemingly-inexhaustible relentlessness may play havoc with thoughts of the specter of death and our own mortality. Or it could be that the idea behind the Predator is just so much damn fun. Regardless of the reasons, for over 30 years, the Predator world has enraptured fans across pop culture media, from film to video games to comics.

With The Predator, the latest offering in the Predator franchise, hitting theaters later this year, Dark Horse Comics rightly seized on the fervor for all things Predator to revisit the extraterrestrial tracker in a new miniseries, Predator: Hunters II, a follow-up sequel to its 2017 story. Written by Senior Dark Horse Editor Chris Warner—artist for the original Predator comics—Hunters II picks up shortly after the first story left off, with the Hunters deciding their next move after a mission with much success but also much loss.

But that’s not the only way Dark Horse is celebrating the return of the Predator to the silver screen and the success of the first Hunters miniseries. This winter, Predator: The Essential Comics Volume 1 will hit newsstands, a 368-page monster of a collection that features art by Mr. Warner and features classic Predator tales from the publisher.

Mr. Warner spoke with me recently about the idea behind Predator: Hunters II, why the Predators may not be so different than Americans in some ways on an anthropological level, and his reflections on creating Predator stories the last three decades. 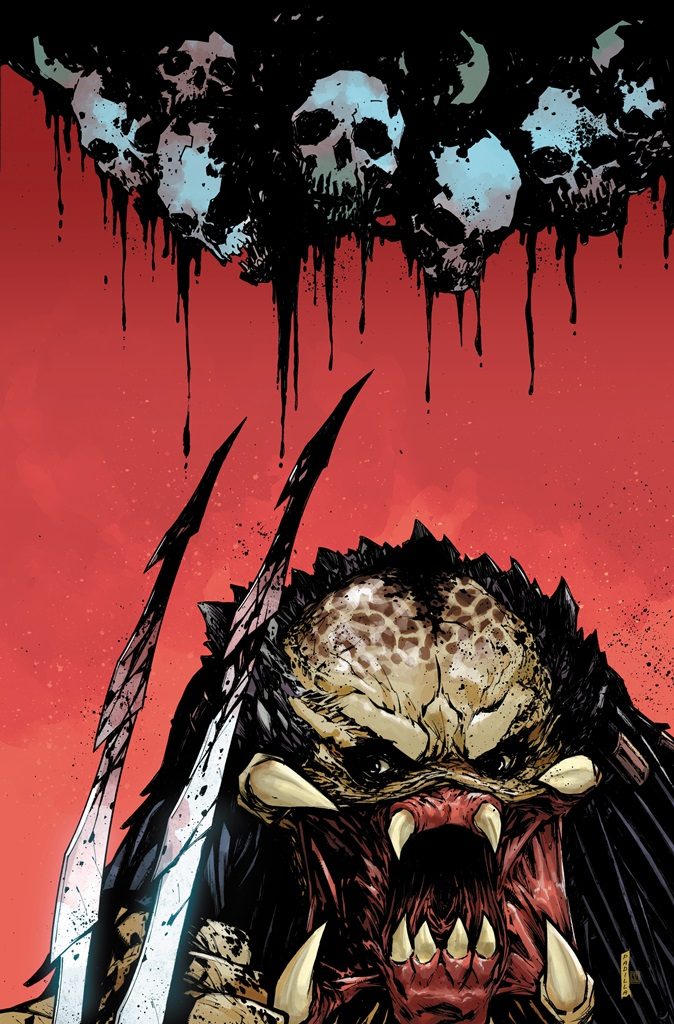 FreakSugar: For folks who are considering picking up the book, what can you tell us about Predator: Hunters II? Is there a connection to the first that new readers need to be aware of before diving in?

Chris Warner: The new series takes up not long after the first series ends. The Hunters are licking their wounds after a successful but costly mission. The future of the enterprise is clouded when another mission in war-torn Afghanistan presents itself, an operation the team may not be adequately prepared to take on. There aren’t a huge number of plot threads carried over from the first series, so new readers shouldn’t have a hard time getting into it. That said, I highly encourage new readers to buy the first Predator: Hunters collection. Several copies, in fact. Christmas will be here before you know it!

FS: You did art for the original Predator run at Dark Horse thirty years ago and now you’re writing for the Hunters series. How does your approach at how you tackle the Predator world change—if at all—shifting from the art to the writing end of things?

CW: For one thing, I need far fewer pencils. But whether drawing or writing, comics are all about storytelling (or should be, anyway). As an artist, you’re a story interpreter. As a writer, you’re creating a story to be interpreted. Both roles require different mindsets, but when you act in service to the story, the two aren’t all that different. 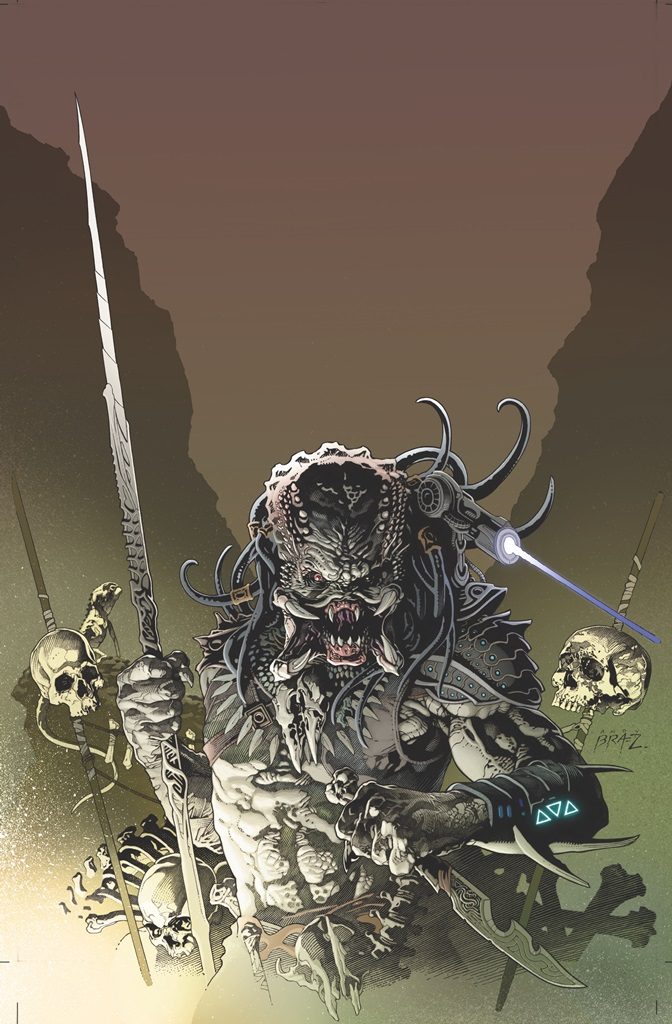 FS: Following up on that, how has the way in which you engage the Predator changed from when you first entered that world three decades ago?

CW: I’d like to think I’ve learned a few things over the eons that have added to my toolkit as a storyteller. Back in the day, I was probably focused more on the surface of story, the “wouldn’t it be cool if” stuff. Now, my interests have broadened and my concerns have changed. I’m still trying to write a kickass story, but I think—or at least hope—that I’m bringing other things to the table that will add some depth to all the action and crazy stuff going on.

CW: On a purely visceral level, they’re cool and badass. But trying for a little more anthropological view, I think the Predators aren’t that different from humans in some ways. Let’s not forget that right here in America, bison were almost hunted to extinction in a hundred years: from sixty million bison in 1800 to only three hundred in 1900! Humans kill for sport, and on some absurd level, the Predators are providing some karmic payback. I find it hard to think of them as purely villainous. They’re sport hunters, but they aren’t killing for geopolitical advantage or racist cruelty. I don’t hunt and don’t want to, but I’m not anti-hunting, so it seems only fair that off-world creatures might want to mount our heads in their dens. 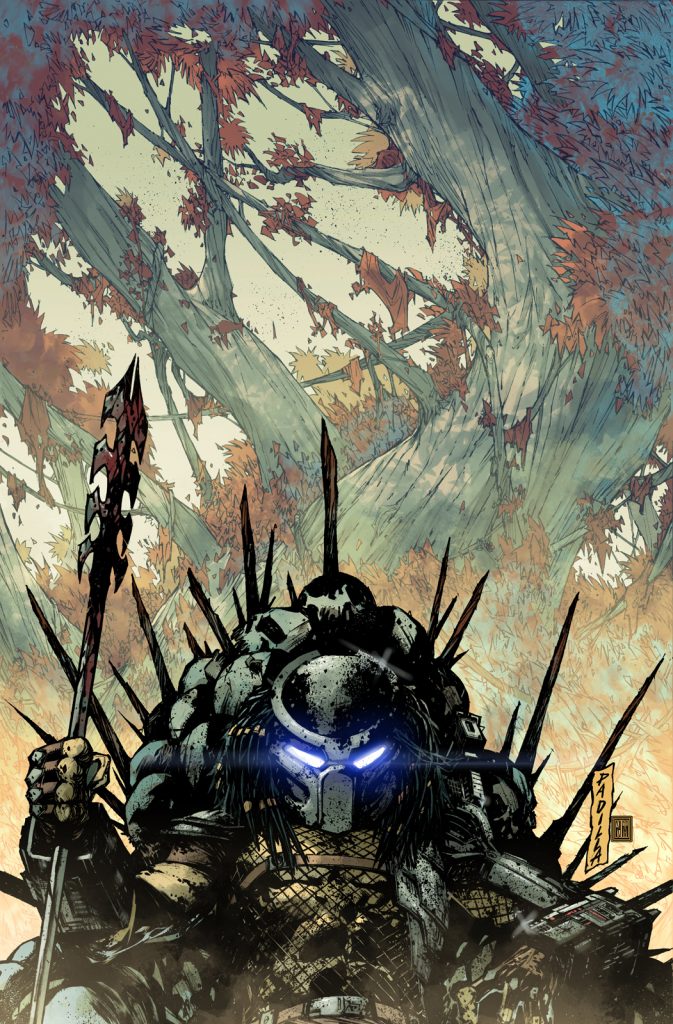 FS: Following up on that, what do you think are essential elements (if any) for a successful Predator yarn to hit all the right notes?

CW: I just think you need a good story. Certainly, Predator enthusiasts have some expectations, but I don’t think good stories come from checking off items on a list or pandering to what you think readers might want. If the readers care about the characters, the stakes of the story are raised, and you’ll get a satisfying experience whether or not you use the Predator net or whatever. I’m a big Predator nerd, so if I like the story, I’m confident that Predator readers will enjoy it. And lest I spend all this time yakking about myself, the real key to a good Predator story is a good artist. And Agustin Padilla, the artist on this new series, flat-out rocks. He makes my lameass scripts sing in angelic chorus. I’m getting misty just thinking about it.

FS: The comic sequel is timely, as the new Predator film hits this fall. What would you say to readers to who are going to see the movie and want to delve further in the Predator universe?

CW: There really aren’t that many truly iconic characters/ideas, and I think Predator is one of them. A lot of good stories have spun out of that mythos, and I encourage readers to seek them out. Luckily, most of them are still in print. Most importantly, mine are still in print! [laughs]

FS: Along with the release of Predator: Hunters II this fall, Dark Horse is also releasing Predator: The Essential Comics Vol 1 TPB in December. What can you tell us about the trade and your reflections on your time with the Predator universe?

CW: Predator is still one of my favorite movies—I will pretty much drop everything and watch it any time it pops up on TV—and the first Predator comics series is still the work for which I’m best remembered, so I’m always happy to get to play in the Predator sandbox. Unlike musicians who tire of playing their old hits, I get a kick out of getting the band back together, cranking up the volume, and pissing of the neighbors!

From the islands of the South Pacific to the mountains of Afghanistan, the Hunters go wherever the Predators appear–even if it’s in a war zone and into conflict with a mysterious government group hunting the same prey!

Despite the casualties suffered during their first mission, the Predator Hunters are on the prowl again!