Life has never been easy for writers Christopher Golden and Mike Mignola’s Lord Baltimore. Beset on a quest of his own making to put an end to the Red King—a god of monsters whose machinations led to the deaths of Baltimore’s family—the man lives an existence of solitude and single-minded vengeance, even when surrounded by allies in his war. And that solitude only becomes heightened in Baltimore: Empty Graves #1, on sale next month, the beginning of volume 7 of his adventures. The lord finds himself mourning dead friends whose bodies have turned up missing. As one might expect, the perpetrators will find themselves in Baltimore’s cross-hairs.

Christopher Golden spoke with me recently about the overarching story of Baltimore, what’s in store for the man in Empty Graves, and the collaborative process with co-creator Mike Mignola. We also have previews for the covers of issues 4 and 5 of Empty Graves as well as the cover for the seventh volume in the Baltimore series!

FreakSugar: First of all, thank you so much for speaking with us again!

FS: Before we get too far into the particulars of Empty Graves, I was curious about your long-view approach to Baltimore and his world. When writing a novel, I realize that you often have to have a roadmap of where your characters and story will be from Point A to Point Z. As a novelist, do you apply those same sensibilities to Baltimore? Do you have a beginning, middle, and eventual final story you’re working toward, or is there a loose idea of what you’d like to do with no set roadmap?

CG: For the first four volumes, we had a basic road map because it filled in some of the adventures that Baltimore had during the time span of the novel. We always knew volume four would get us to the end of the novel. For the fifth and six volumes, it was about building the new status quo, the post-Haigus period. I guess you’d say that we’d plot each story and each volume fairly thoroughly, but with only a very general sense of where it was going and how it would end.

Or maybe I should phrase it this way. I knew exactly how it would end, but had only a basic understanding of how we’d get there. Then one day while I was writing volume six, I had an epiphany.  I knew the structure of it, the major beats, the buildup, and very specifically the end, and I called [Baltimore co-creator] Mike [Mignola]—hoping that he would agree with this plan.  I was mightily relieved when he did.  And then, of course, as he always does, he helped me find better ways to accomplish some of the things I wanted to do.  To be clear, Empty Graves is not the end of Baltimore…but every issue we produce now is a very precise step on the path to that story. 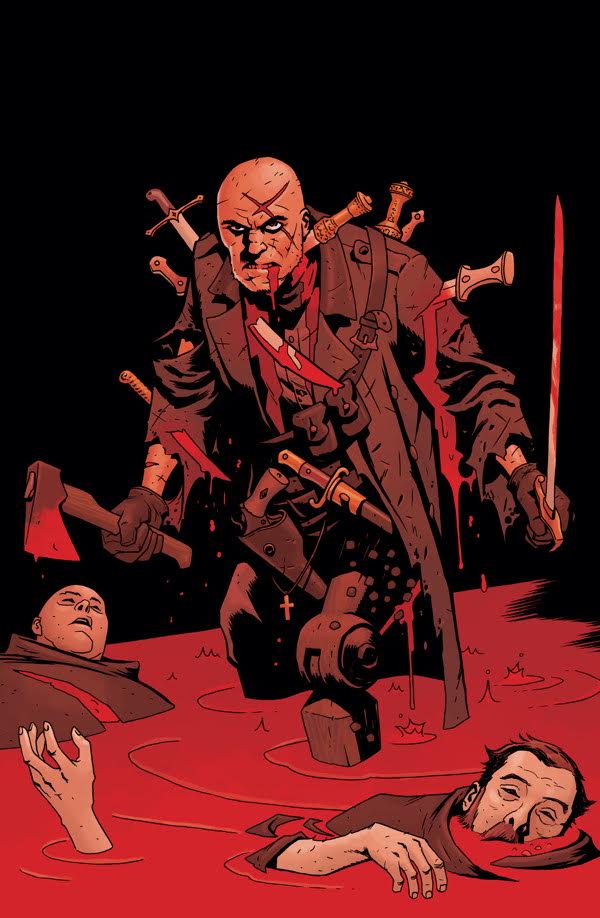 FS: For readers who might be new to Baltimore and his world, what can you tell us about where he finds himself at the beginning of Baltimore: Empty Graves #1?

CG: The Red King is the first dark god, considered the Father of All Monsters, a god before gods. In ancient times, worship of him dried up and he fell into a kind of hibernation state. War and hatred and bloodshed disturbed that sleep and as he slowly became aware of the world again, monsters and evil started to return. Baltimore was a British officer during World War 1 when he encountered one of those evils, leading to a series of events that included the slaughter of his entire family. Ever since, he’s been a hollow, damned creature, wanting only two things—first vengeance, and then his own death. But as the Red King’s power continues to grow—and the threat of his returning bodily to our world increases—Baltimore has realized that he can’t rest until the Red King is destroyed.

As Empty Graves begins, we find Baltimore mourning the deaths of several dear friends and allies, including his childhood friend, Thomas Childress. Witches have stolen Childress’s corpse, and Baltimore is determined to find his friend, give him a proper burial, and destroy the witch responsible. And, of course, there’s still the Red King…

FS: From the description of issue 1, it seems as though Baltimore will experiencing a lonely road ahead. Just by nature of who he is and what he does, do you consider Baltimore a lonely character, even when surrounded by friends and allies?

CG: Absolutely. Childress was the last person alive who really knew him well when he was a boy, or even who knew the young man he became before his family was murdered and his life torn apart. He has allies, perhaps even friends, but the way Baltimore sees it, he is already dead, so there seems little point to pleasantries. 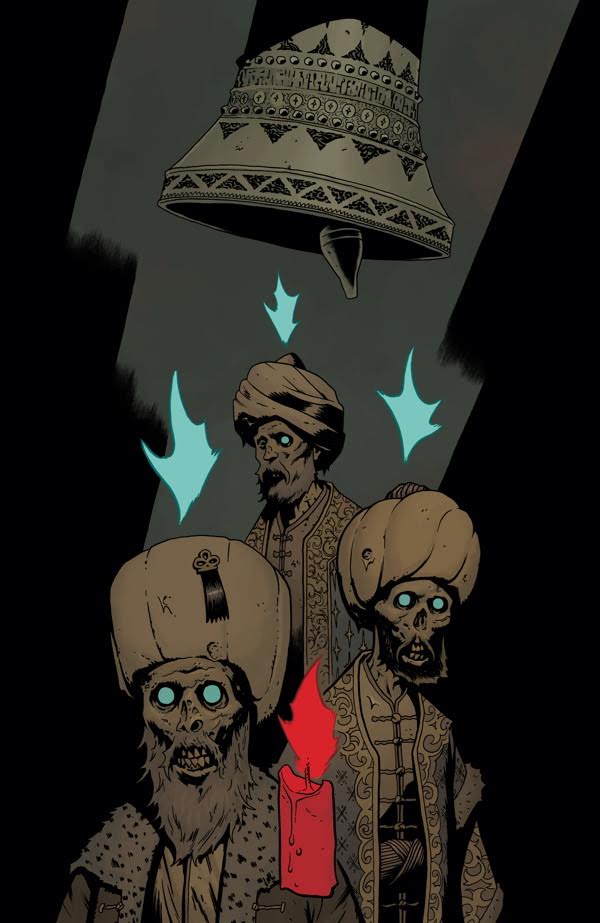 FS: Following up on that, how does putting to rest ally after ally, friend after friend, do to him emotionally?

CG: He mourns them, certainly. Grieves for them.  But in a larger sense, he is never surprised by these losses.  He’ll do what he can to save their lives, but as far as Baltimore is concerned, if they fight as his side, they’re accepting that they not destined for long lives.

FS: Do you see pushing forward with his mission to be, in part, a way to cope with that loss?

CG: He doesn’t think of it that way. He’s single-minded about his mission, and if they’re going to join him, they need to share that same attitude. Some of them do and some don’t, and some will learn the hard way what he expects of them.

FS: If there is a theme to Empty Graves, what would it be? For that matter, what do you see as the overarching takeaway, if any, from the tale of Baltimore?

CG: We can talk about the overall philosophy of Baltimore when it’s over, if you like. As for Empty Graves…like a lot of my work, it’s about the acceptance of death as a part of life, about the consequences of our choices, and about the truth of life, which is that you hardly ever imagine how awful things can really get until they actually happen. All in all, a really happy, uplifting story. On the lighter side, it’s about camaraderie, witches, monsters, history, and a guy who refuses to die until he’s done his job.

FS: Baltimore is more than effective at what he does. Do you see any part of yourself in Baltimore? Is there anything in particular you admire about the character?

CG: I don’t think I’d like to see myself in Baltimore, but that doesn’t mean he doesn’t have admirable qualities. He keeps moving forward, keeps toward the goal, no matter what gets thrown at him.  He ignores other people’s expectations and prognostications and attempts to manipulate him. And from time to time, he kills monsters with a giant friggin’ harpoon, which is always nice. 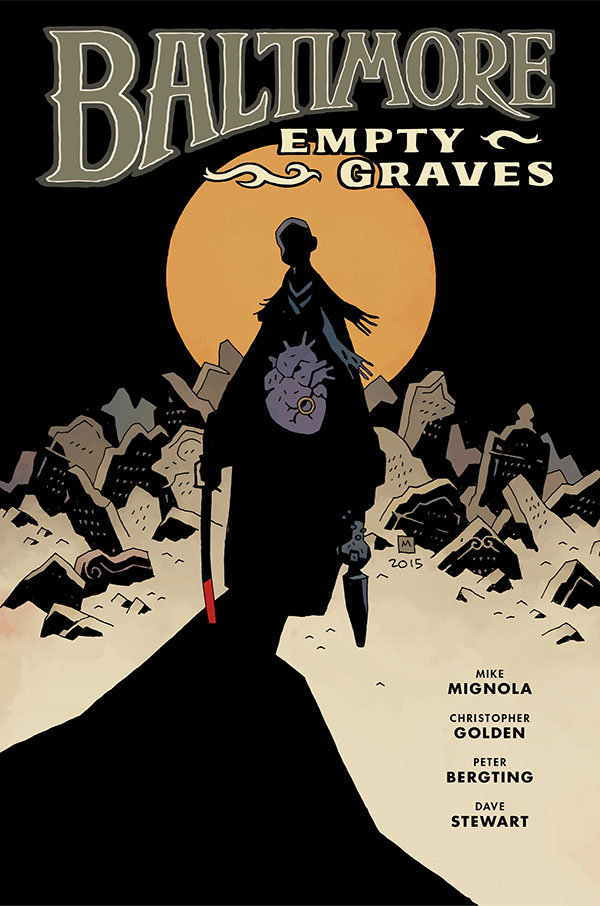 FS: You and Mike Mignola created Baltimore together. You’ve discussed your collaboration process before and you’re both phenomenal writers who have your own unique ways of crafting a story. I was curious as to what specifically you think you bring to the process that Mike doesn’t and vice versa, because it works.

CG: Firstly, thanks for that. I’ve talked a lot in the past about how working with Mike is very liberating. He’s likely to dismiss something he doesn’t like, but it won’t be because it’s too crazy. That makes the creative environment more fertile. Obviously we have our own interests and strengths as writers, though we also share a lot of the same interests. He’s one of the greatest storytellers in comics, so obviously he brings that to the table. As for me, I mostly bring stories only Mike will let me get away with, as well as magical plot elements that make him wince. Like portals. There are few things Mike hates more than magical portals.

FS: Some of the best horror stories speak more to something about us as humans more than it does the boogeyman or monster in front of us. What do you think Baltimore and his tales, particularly Empty Graves, has to say about the human condition?

CG: I’ve written a lot of novels in the past twenty-odd years, but one of my favorites is called The Ferryman. It’s about putting one foot in front of the other, forging ahead, no matter how dark and nasty the path in front of you becomes. It’s the only way to survive this life with your soul intact. It’s impossible not to sound like an ass when you’re talking about what your fiction has to say about the human condition, but if it’s anything, it’s that. The most important step is the one you take when you feel like you can’t possibly take one more. There, you happy? I sound like an ass. Well done, the both of us. [laughs]

FS: Looking ahead and without too many spoilers, what should readers expect to see in Empty Graves?

CG: Sorrow, vengeance, and an ending that takes everything we’ve done before this, gives it a violent shake, sets it on fire, and hurls it off a bridge.

With no bodies to bury, Baltimore lays to rest the memories of good friends, while the strange worshipers of the Red King make use of the corpses of his fallen allies.