Writers Christopher Golden and Mike Mignola’s Joe Golem stories have long been engaging tales involving the occult and mysticism, but have also delved deep into the idea of humanity and what it means to be human. Golden and Mignola bring a healthy mix of adventure romp and existential introspection in their latest miniseries Joe Golem: Occult Detective—The Conjurors, which debuted this month from Dark Horse Comics. Joe, his mentor Simon Church, and Molly are all in dire straits, with survival not guaranteed for any of them.

That’s not all coming from Golden in the past months. His latest novel in his Ben Walker series, The Pandora Room, hit shelves this April, with Ben contending with a myth that’s become fact for the adventurer.  And Ben Walker fans have more reason to cheer, as it was recently announced that the series is going to be adapted for television!

Mr. Golden spoke with me recently about the conceit of Joe Golem: Occult Detective—The Conjurors and translating his and Mike Mignola’s prose novel to the comic book medium, as well as chatted about The Pandora Room and adapting the Ben Walker novels to television. 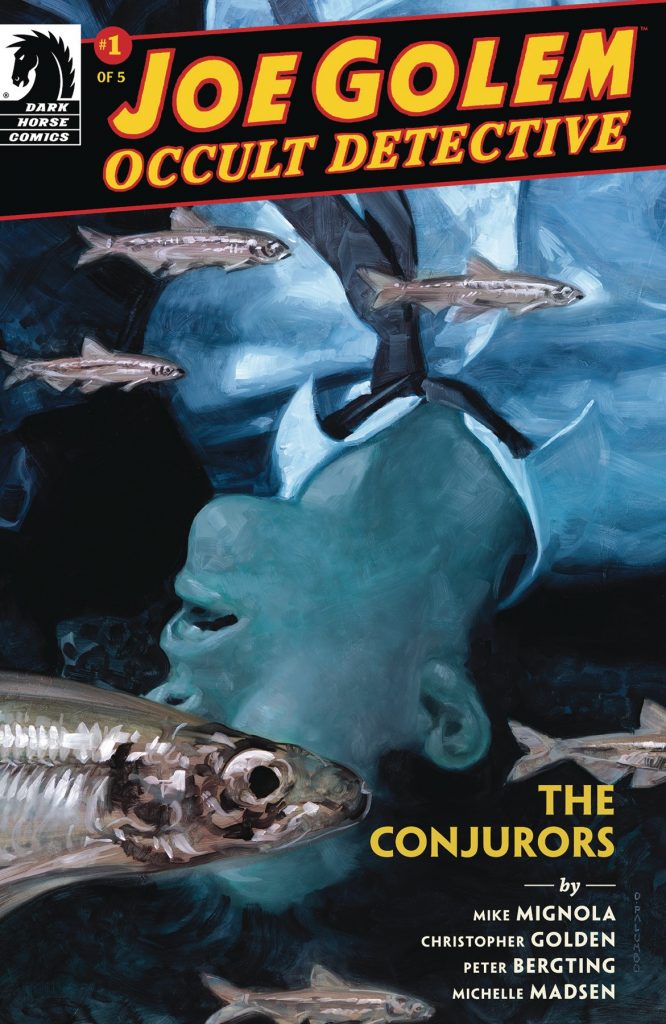 FreakSugar: Before we get into the new series, for folks who may not be familiar with the character, what can you tell us about Joe Golem and his world?

Christopher Golden: In 1925—at the very moment when Lord Baltimore died vanquishing the Red King—a massive cataclysm shook the world. In Manhattan, that resulted in an earthquake and a shifting of the bedrock that sank Lower Manhattan twenty to thirty feet, turning the whole portion of the island into “The Drowning City.”  Several decades later, a Victorian-era detective named Simon Church, who’d kept himself alive through mechanics and magic, found the inert stone golem in his possession had not only come to life, it had become human. After a succession of ordinary human sidekicks who’d lost their lives aiding him, Church embraced this new arrival as “Joe Golem,” a sidekick much harder to kill. Over time, as Church aged, Joe became more and more the detective instead of the sidekick, coming into his own, yet always haunted by memories of his earlier life that he could not explain…memories that Church tried constantly to repress, claiming it was better for Joe but perhaps having more selfish motives. 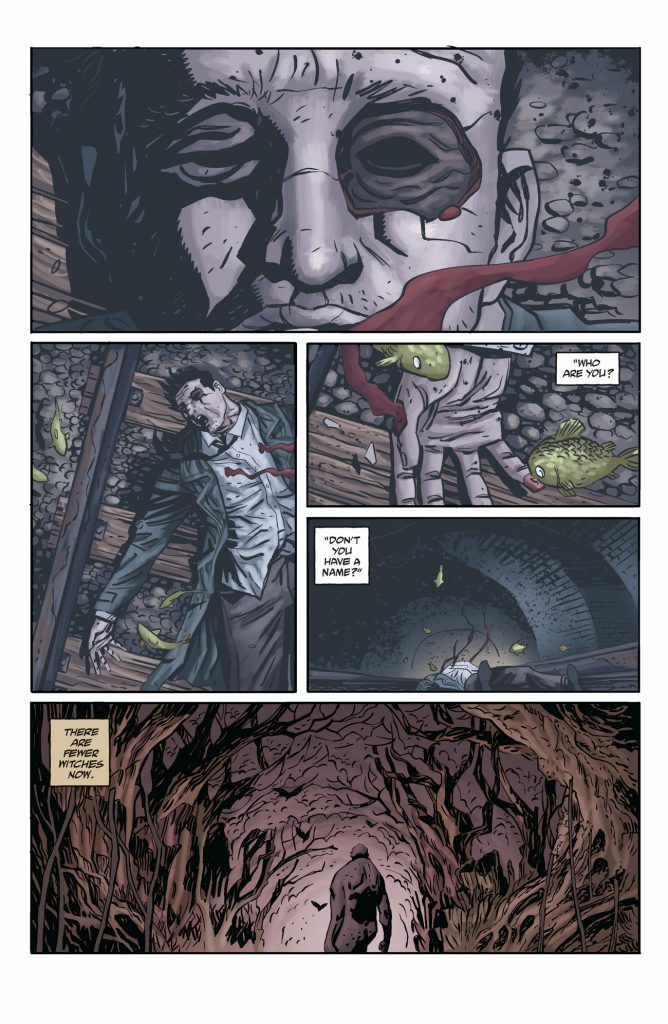 FS: Where do we find Joe Golem at the beginning of Joe Golem: Occult Detective – The Conjurors?

CG: In the previous miniseries, we saw the return of one of Church’s longtime enemies, the mad scientist Dr. Cocteau, who has been trying for decades to communicate with the Outer Dark—the dark and ancient dimension that exists beyond the veil of reality, and is inextricably entwined with the origins of our universe and our world. Dr. Cocteau knew that an elderly magician named Felix Orlov had been born during a dark ritual and that his actual father is one of the gods of the Outer Dark. Cocteau has begun a transformation in Felix, triggering a metamorphosis from human into his father’s son, believing that Felix’s change will create a rift when his father comes to claim him. He thinks that, using a bizarre mechanism called Lector’s Pentajulum, he will be able to speak to the old gods of the Outer Dark. He wants to travel with them, to journey into the Outer Dark, the first human being to do so. Secretly, he hopes to become a god himself. The key to getting Felix to go along with this plan is a teenaged girl who has been Felix’s aide, his friend, his assistant, his surrogate daughter. Cocteau wants to force Molly McHugh to help him, or use threats against Molly to force Felix to cooperate. It’s all going to end badly for everyone—perhaps even the entire human race—if Joe can’t get there in time to save Molly and stop Cocteau’s mad plan. There’s only one problem…as the story begins, Joe Golem is already dead… 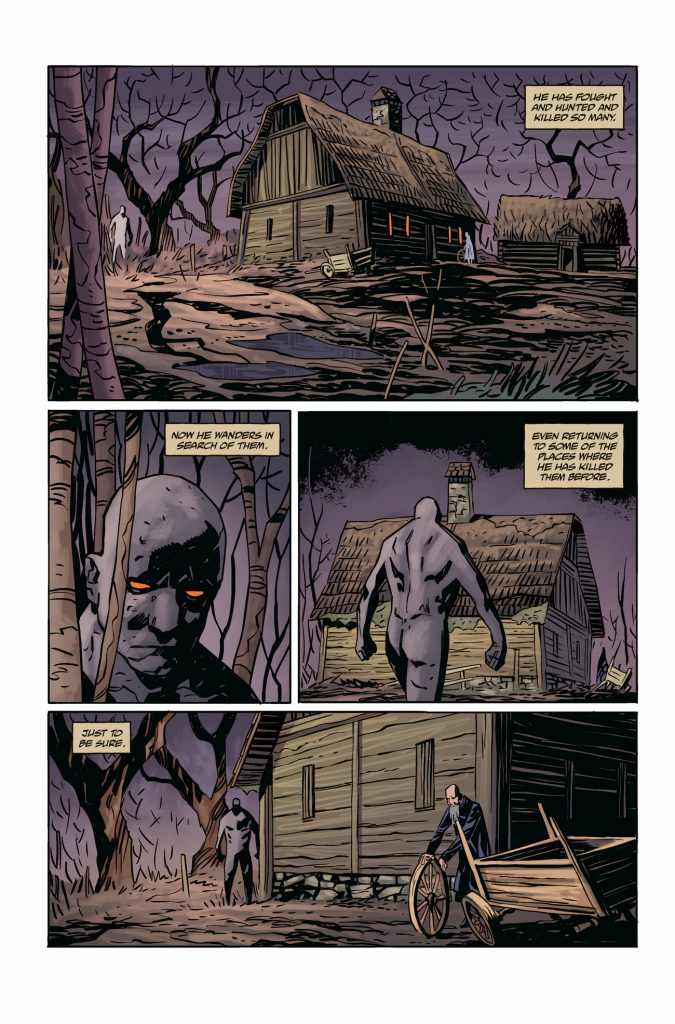 FS: On that cold open: What can you tell us about how that sets the shape of the rest of the story?

FS: Joe Golem: Occult Detective – The Conjurors is the second part of the comics adaptation of your and Mike Mignola’s prose novel. What is the process like translating the novel to the comic page?

CG: What’s been most interesting to me is how much has changed. Once we started doing the earlier Joe Golem comics stories, the ones that take place before the events of the novel, we knew that we were abandoning the continuity of the novel. Joe Golem: Occult Detective takes place in the same universe as our Baltimore comics series. It introduces new characters and situations. When we started adapting the novel, we followed the plot pretty closely, but we’re also incorporating both events and characters that we’ve now set up as having happened in the past, as well as characters and events you’re going to see in the future. The core story from the novel hasn’t been altered much, but it now exists in this greater tapestry. I also think that the way Joe and Church’s relationship has unfolded in the comics really changes the tenor of what happens in this series in ways that I really love. In certain scenes, I took dialogue from the original novel, but I found it interesting that the more I got into The Conjurors, the less I found myself referring back to the original text. This is a reinvention as much as a retelling. 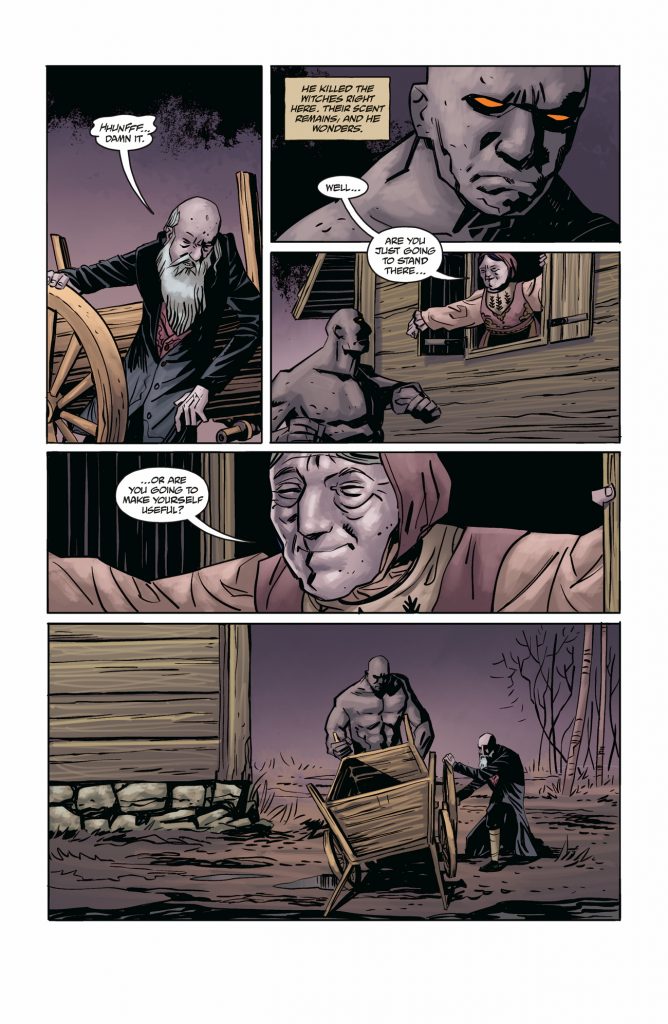 FS: You and Mike Mignola have worked on many projects together. What is the collaboration with him like from project to project?

CG: It really depends on the project. Even from the beginning, with the Hellboy novels I wrote (starting with The Lost Army, a million years ago), Mike would be more involved with some things than with others. I’ve edited four Hellboy short story anthologies, written three novels, edited the whole line of Hellboy novels by other authors, co-wrote the first BPRD miniseries, worked on early drafts of the recent Hellboy movie, adapted Baltimore as a film script, worked on versions of Joe Golem as a film script, and written three original novels with him, two of which led to comics series—Baltimore and Joe Golem.  With the novel version of Baltimore, Mike was involved with every step, going over every word, because he had a very specific vision for what he wanted in that book and that world, but other projects run the gamut as far as how in-depth he gets. I appreciate the faith he’s put in me over the years, but even more, I really appreciate the creative freedom that he inspires. I can be a stickler for explaining everything, and going back especially to the Baltimore novel, Mike has this wonderful way of challenging that, of reminding me that in a world like that, weird shit happens and people make up myths and legends because they don’t have real answers, which makes those things even more unsettling. 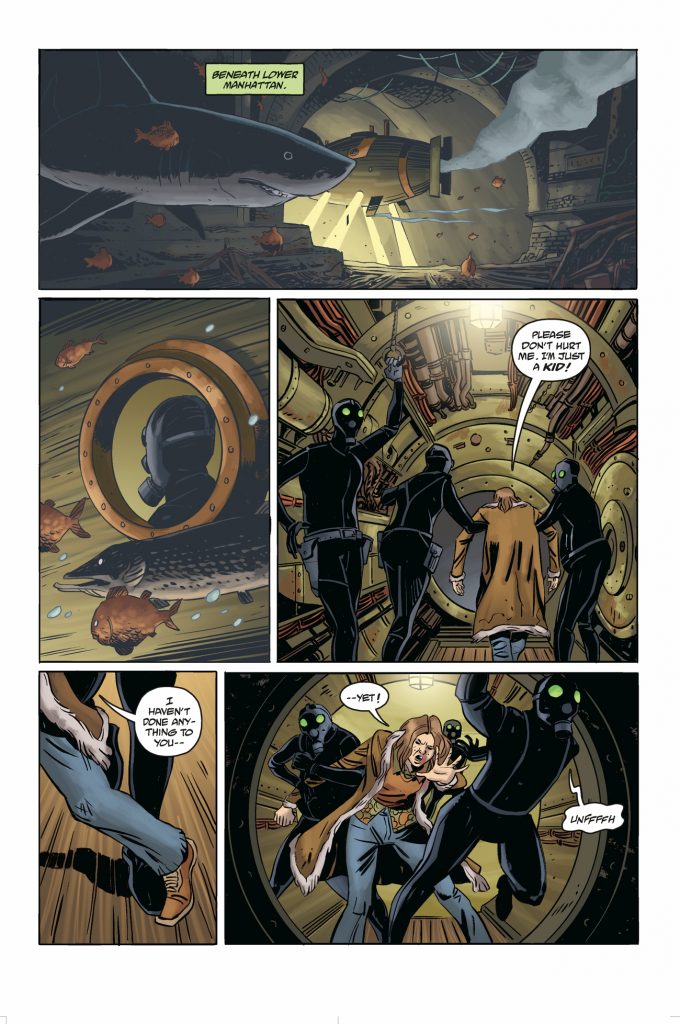 FS: Your newest Ben Walker novel, The Pandora Room, just hit last month. What can you tell us about the book and the myth behind the story?

CG: There are all kinds of variations on the Pandora myth. I was poking around, reading a bit about it, and I found references to Pandora having another name—Anesidora—as well as to the question of whether the “box” contained all the world’s blessings, or all of its curses, and I thought—what if there were two? Two sisters—Pandora and Anesidora—and two “boxes”—one with blessings and one with curses? And what if we found ONE of them today, but we couldn’t be sure which one? In an abandoned underground city in one of the most volatile parts of the world? Everyone would want it, either to use it or to keep others from using it. People would kill for it. And then I thought…what if there’s another reason it’s never been found? What if there’s something else inside it, something that explains how badly the myth has been misinterpreted over time? Something that’s ancient and malevolent and could kill us all?

FS: While Ben Walker is still steeped in the world of the supernatural, the character is different than others that you work on. What do you get from writing Ben that you might not get from your other work?

CG: Ben’s world is an ordinary, tangible world. It’s our world, really, and up until he started to see some horrific things on his job, he never imagined it was anything but. He’s not a sorcerer or any kind of supernatural being, he’s not a Joseph Campbell hero, he doesn’t have a destiny.  He’s just a guy doing his job, learning along the way that when you’re digging up the ancient unknown, you’re going to learn secrets you wish you’d never found. It’s hard for us to imagine true evil, evil as something more than human evil. Sinister malevolence. Ben Walker is smart and courageous, but he’s just a guy, and these experiences gnaw away at an ordinary person.  If you’re getting the impression I love the character, you’re right.

FS: Speaking of Ben Walker, there’s big news: AGC Television is adapting your Ben Walker novels. Congratulations! How did that come about? Will you be working on the adaptation?

CG: I’m writing the pilot script right now and also working on the series bible. I’m an Executive Producer on the series, working with Aghi Koh and Pete Donaldson, the producers who brought the project to Lourdes Diaz at AGC to begin with. It’s been a great ride so far, with smart, enthusiastic partners. Keep your fingers crossed. 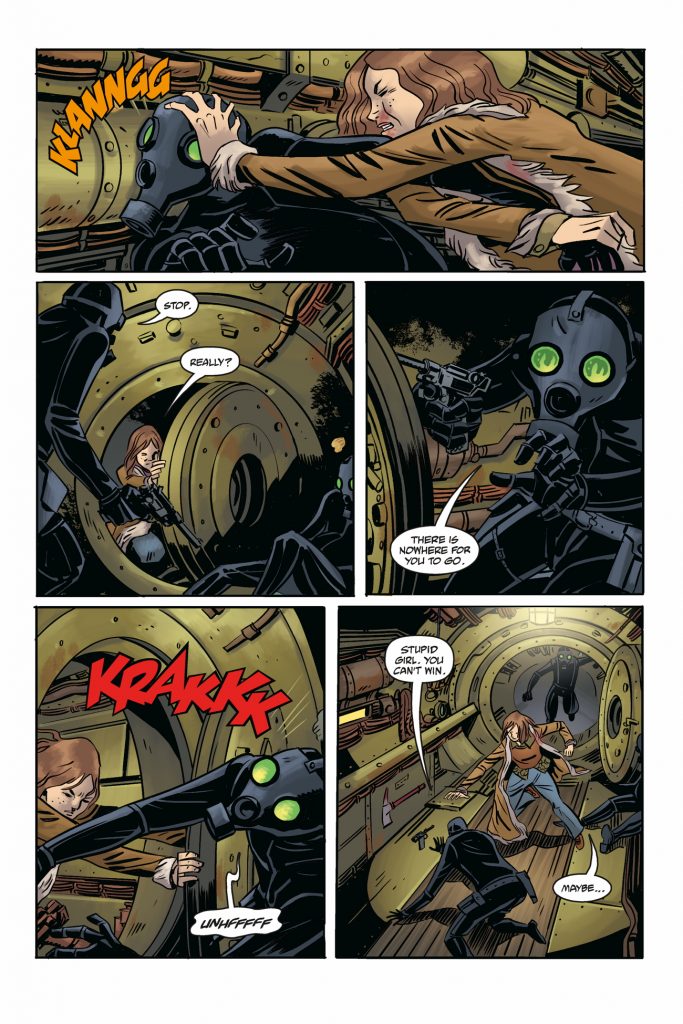 FS: Is there anything you can tease about what we can expect to see in Joe Golem: Occult Detective – The Conjurors going forward?

CG: Endings and beginnings. That’s all I can say. Keep reading.

Or is he? Simon Church is fading fast in the city above and Molly is held captive by Dr. Cocteau’s gas-men below, but something stirs in the tunnels. How much of the golem is still in the man, or the man in the golem? And can either be enough to stop Dr. Cocteau once he has the artifact he seeks?

* The second part of the comics adaptation of Mignola and Golden’s prose novel!