Due to his hubris and folly at the beginning of Marvel’s Spider-Man story “Spider-Geddon” last year, the former villainous Otto Octavius triggered a series of events that led to the Inheritors—the psychic vampires who prey on spider-powered heroes across the multiverse—to free themselves from imprisonment. Otto, Peter Parker, and the rest of the Spider-Folk eventually win the day, although while suffering casualties along the way. At the end of the tale, the once-Doctor Octopus reclaims the mantle he once held as the Superior Spider-Man and protects San Francisco with his formidable mind and abilities.

However, although Otto has turned over a new leaf and left his life as Doctor Octopus behind, he still has some growing to do in his role as superhero. Writer Christos Gage, artist Mike Hawthorne, inker Wade Von Grawbadger, and colorist Jordie Bellaire follow that growth in the latest Superior Spider-Man series, chronicling the struggles Otto must face if he truly hopes to be the hero he feels he was meant to be.

With the first volume of Superior Spider-Man going on sale on July 31st, I spoke with Mr. Gage recently about where we find Otto at the beginning of the series, how the events of Spider-Geddon changed him and his outlook, in what ways the former villain tries to fight his worst impulses, and what we can expect to see in the series moving forward. 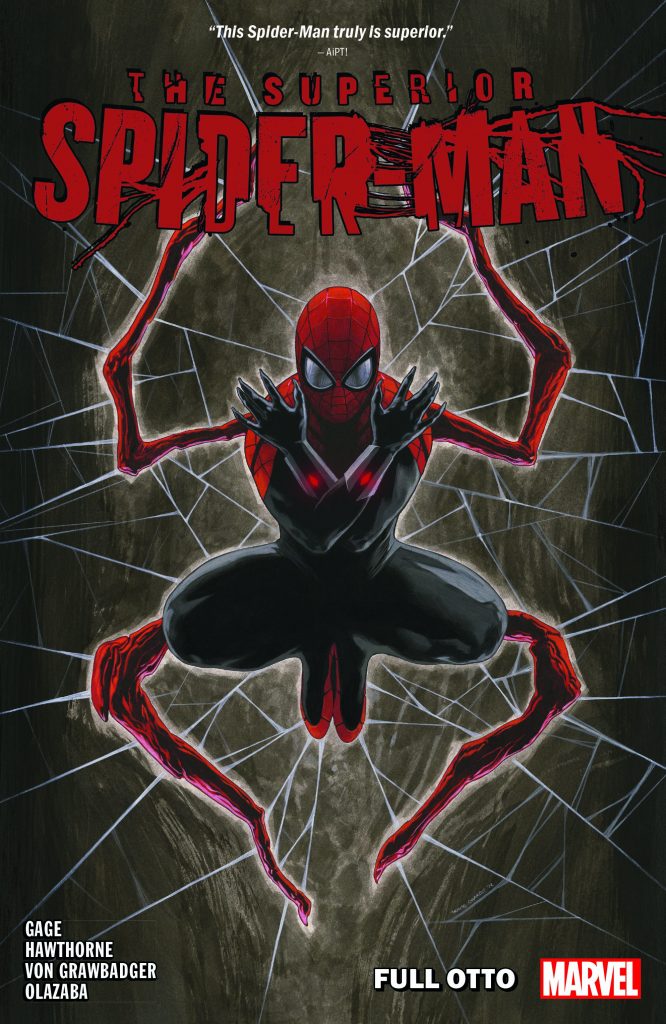 FreakSugar: Where do we find Otto at the beginning of The Superior Spider-Man?

Christos Gage: He’s in San Francisco, protecting the city as the Superior Spider-Man while teaching at Horizon University as Professor Eliot Tolliver. He’s declared himself the city’s protector, and, far away from the annoying interference of New York’s heroes, he’s going to do it in a superior way. Of course, the best laid plans of mice and octopi…

FS: Following the fallout of Spider-Geddon, what is Otto’s place within post the community of Spider-Folk and the larger hero community?

CG: An uneasy peace. Peter Parker has given him a clean slate after Otto saved Aunt May from the Red Goblin in Amazing Spider-Man #800, plus his actions in Spider-Geddon. So Otto is free to try to be a hero, but if he should cross any lines, a lot of folks are keeping an eye on him and wouldn’t hesitate to intervene. 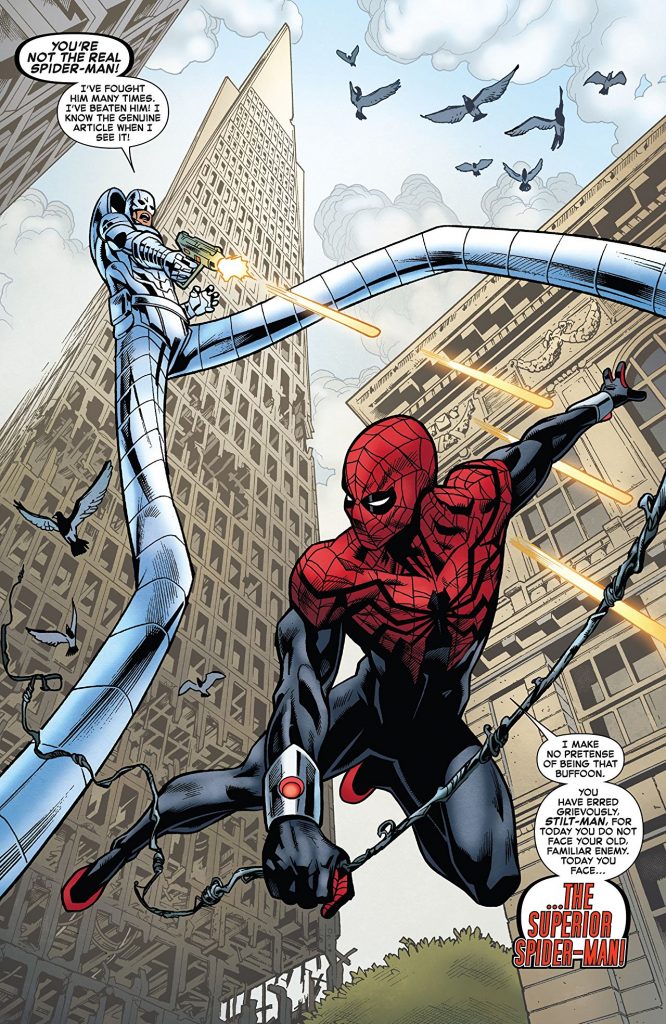 FS: Mike Hawthorne’s linework is always stunning. What has the collaboration process been like with him and the rest of the creative team?

CG: I completely agree – Mike didn’t just continue his high level of work with this book, he seems to have ascended into an even greater level of awesomeness! And I have to say, the combination of Mike with all-star inker Wade Von Grawbadger has been a beauty to behold…and of course, adding superstar colorist Jordie Bellaire brings it all to life. Every one of them brings so much to the table, and all are such fans of each other’s work. It’s like everyone on the team wants to continually bring their A-game to live up to what everyone else is doing. And we’re having fun! I don’t want to jinx it, but it seems like Nick and the rest of the Spidey office have put together the perfect team here.

FS: What can you tell us about Otto’s post-Spider-Geddon adventures? How will his experiences change him and his outlook, if at all?

CG: Otto has had to admit that he (gasp) can make mistakes – like the ones that led to the return of the Inheritors – and that he can’t handle everything himself. He acknowledges that he sometimes needs help and is, reluctantly, willing to ask for it. That doesn’t mean he feels any less strongly that he knows best, but he’s more open minded about things…for Otto. Which has limits. 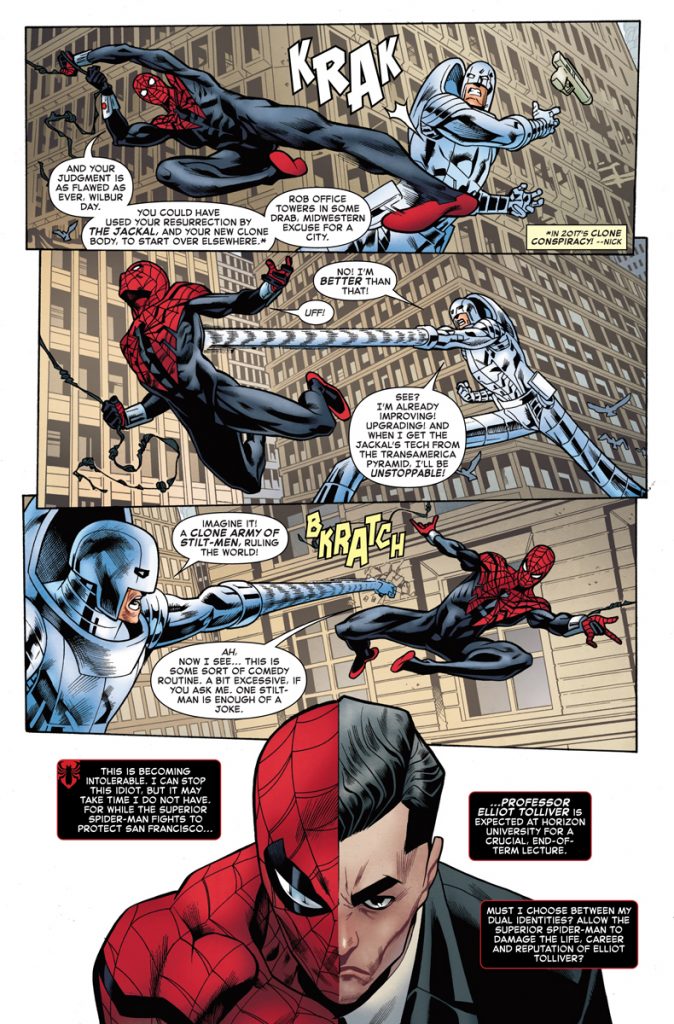 FS: Otto has grown and changed so much as a character in the last decade. Who is Otto to you? What drives him to do what he does as the Superior Spider-Man?

CG: Otto, as Superior Spider-Man, is a man whose impulses are selfish but who is trying to behave in an unselfish way. It’s sort of another step along the continuum of super heroes. The Golden Age characters instinctively knew what the right thing to do was and were inclined to do it by their very nature. Marvel’s great innovation was introducing characters like Peter Parker, an everyman…a good man, but one who make mistakes, or doesn’t always think through the implications of his actions, and then has to face the consequences. Otto’s the next step – he’s inclined to NOT be a good man. He thinks he knows better than everyone else and that he deserves better than everyone else. That the rules don’t, and shouldn’t apply to him. There’s good in him – he wants to benefit the world – but the way he approaches that is from the point of view of a villain. The question is whether he can grow as a person enough to be more like Pete, or whether his villainous impulses will ultimately win out.

FS: Following up on that, Otto sometimes seems like he’s his own greatest nemesis.  Do you agree with that and, if so, will we see some of that in the series?

CG: Yes, although I think he’s made progress with that. In Spider-Geddon, we saw him acknowledge that he couldn’t do it alone…that he needed the help of others. That’s a big step for him. But his instincts are still often counter to what a hero needs to do. However, he’s now more likely to acknowledge other points of view are valid, and ask for help when he needs it. As a result, we’ll see him interacting with other Marvel characters…some for the better, and some with explosive results. 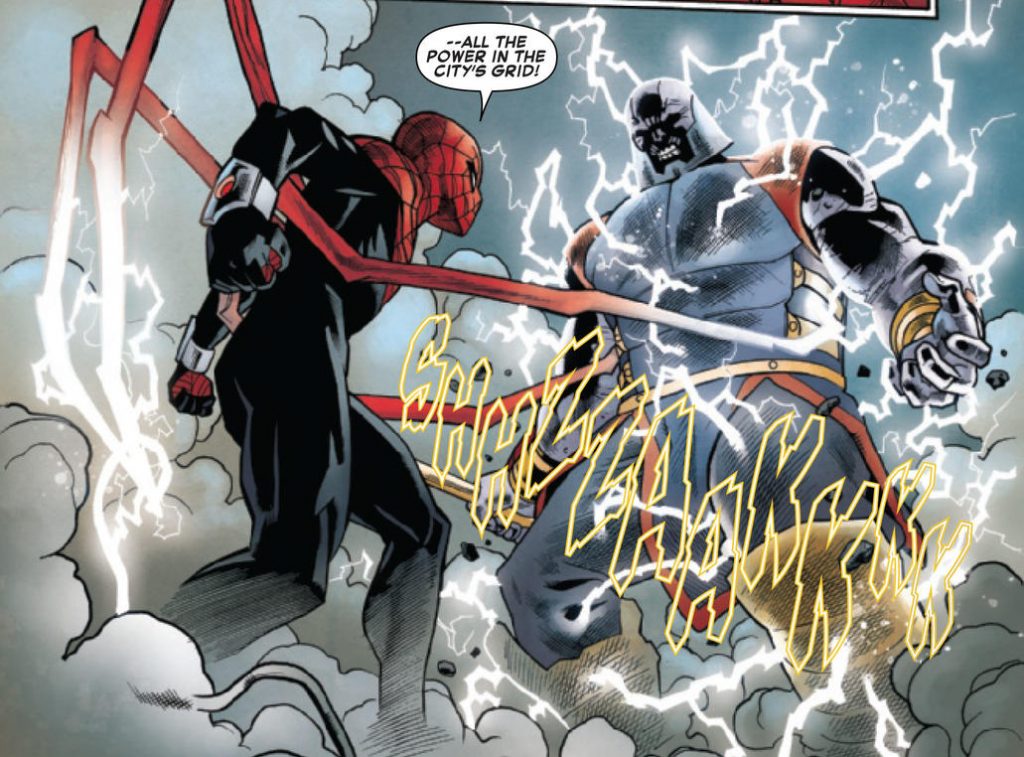 FS: Working on a character like Otto seems like it would be a ton of fun. What has been your favorite part of working on the series?

CG: It’s great. The most fun, aside from seeing the beautiful art come in (which is always the best part), is getting to put myself in Otto’s mindset, and think about how I would handle a situation in an arrogant, selfish way. A chance to tap into my least pleasant impulses and give vent to them in a productive manner. There’s something about writing self-centered characters that’s really liberating…and fun!

CG: Otto will come up against a vastly more powerful villain, and really be put to the test early on. He will encounter heroes and villains that don’t necessarily fit in his wheelhouse of science. He will have to deal with a familiar Spidey supporting character figuring out his true identity. And he’ll do it all in a SUPERIOR way!

Otto Octavius leaves the moniker of Doctor Octopus behind…and once again becomes the Superior Spider-Man! If you think you’ve already read the most intense, unexpected and surprisingly heartbreaking Superior Spider-Man story there is, prepare to be proven wrong! Otto is going to show the world that he’s the most pragmatic, most effective and (to him, anyway) best super hero on the planet. But when a villain that considerably overpowers Otto shows up in San Francisco, there’s no way the Superior Spider-Man can triumph, right? Right? Can you see Otto smirking from where you’re reading this?