The night is dark and full of terrors, something that writer Sean Lewis and artist Caitlin Yarsky seem to have an innate sense of manipulating into a white-knuckle tale. In their upcoming Image Comics series Coyotes, Lewis and Yarsky blend the supernatural and female badassery, following a group of women uniting to combat werewolves in a town on the Mexico-U.S. border. Inspired by chilling myths of lycanthropy and real-world human trafficking, Coyotes mixes and matches these aspects to craft a tale of horror and kinetic ass-kicking.

Mr. Lewis and Ms. Yarsky spoke with me recently about the conceit of Coyotes, building tension in a tale of horror, and what we can expect to see in the series moving forward. 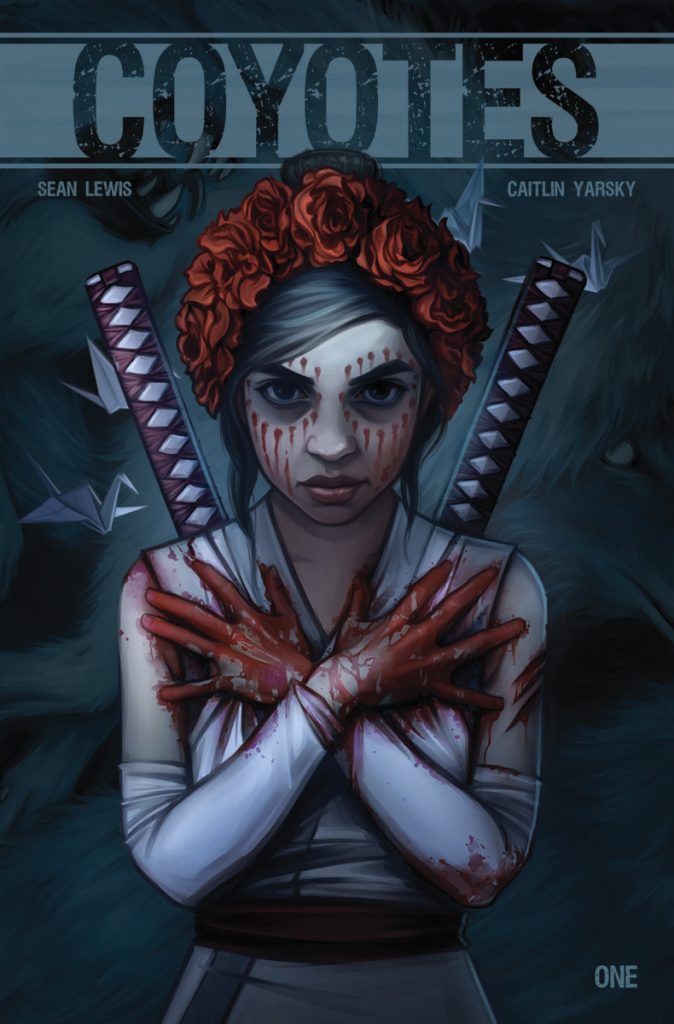 FreakSugar: For folks who might be considering picking up the book, what can you tell us about the conceit of Coyotes?

Sean Lewis: It’s Underworld meets Sicario. Kill Bill meets The Howling. Basically, in a border town called the CITY OF LOST GIRLS a group of women are banding together to fight off werewolves (who refer to themselves as COYOTES) who want their blood. The champion of this group of women is a 14-year old girl named Analia.

FS: Coyotes is one of the most unique comic issues I’ve read in quite some time, both in look and subject matter. How did the idea of the series and your collaboration come about?

SL: Thanks for saying that. Caitlin’s art is incredible. When I first saw it I wanted to do something with her that had a storybook feel, a twisted fairy tale. I had been obsessed with stories of women going missing in Mexico and was really stuck on the word Coyote- meaning a human trafficker who moves people across the border and the literal meaning of the word: a pack animal, a scavenger…

I started thinking- what if you exploded the literal into something larger. A metaphor. This became a werewolf. I already knew of so many stories of women who go missing across the world… the story started to develop from that and get filled with some of my big obsessions: Tarantino, the desert, Kurosawa films, female singers, created families versus real families, Tank Girl and so on. 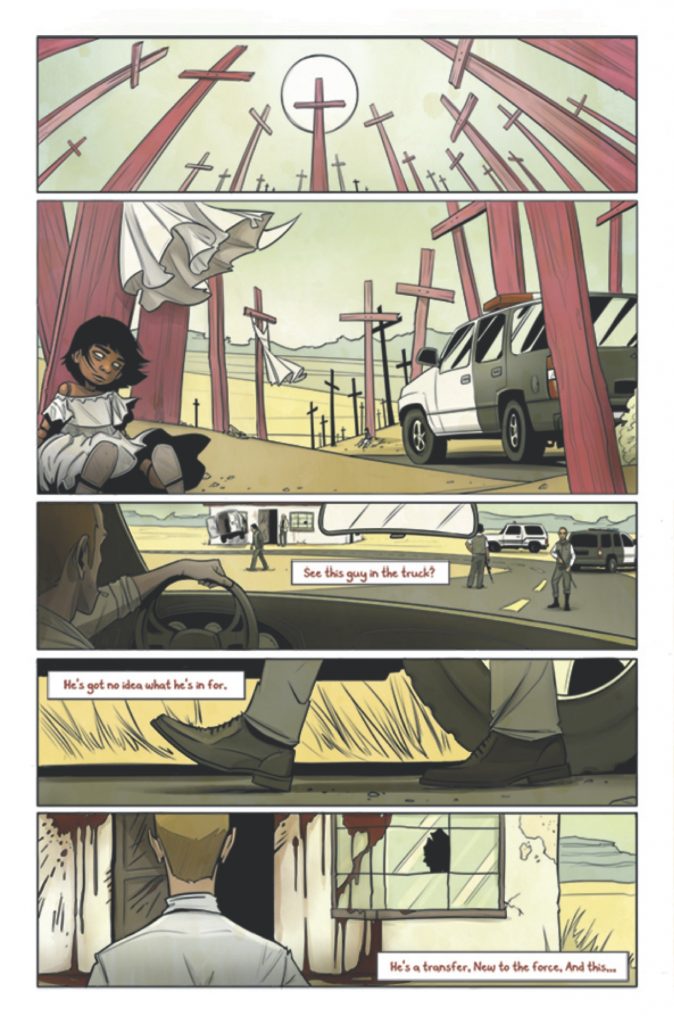 FS: What can you tell us about Analia, our books protagonist, at the beginning of the tale?

SL: Analia has been trained to fight these animals that are stalking women. She is an orphan- her mother and sister are gone. She is naturally adept at fighting but has no idea how deep her abilities run and her need. How strong and vengeful do any one of us feel when someone we love is hurt?

She grows as the story does from an angst ridden teenager to a woman in her own right.

FS: Following up on that, what can you tell us about the Duchess and where Analia lives? How did she find herself in the care of the Duchess?

SL: Ah, you want the secrets! This will all unfold itself, for certain. What I can say is that the Duchess, who leads the women Analia falls in with, has made it her personal mission to protect the women in this city at any means necessary. She recruits and she enlists people with talent. As we will find, this is how the Duchess became who she is… and it will be how Analia is discovered as well. 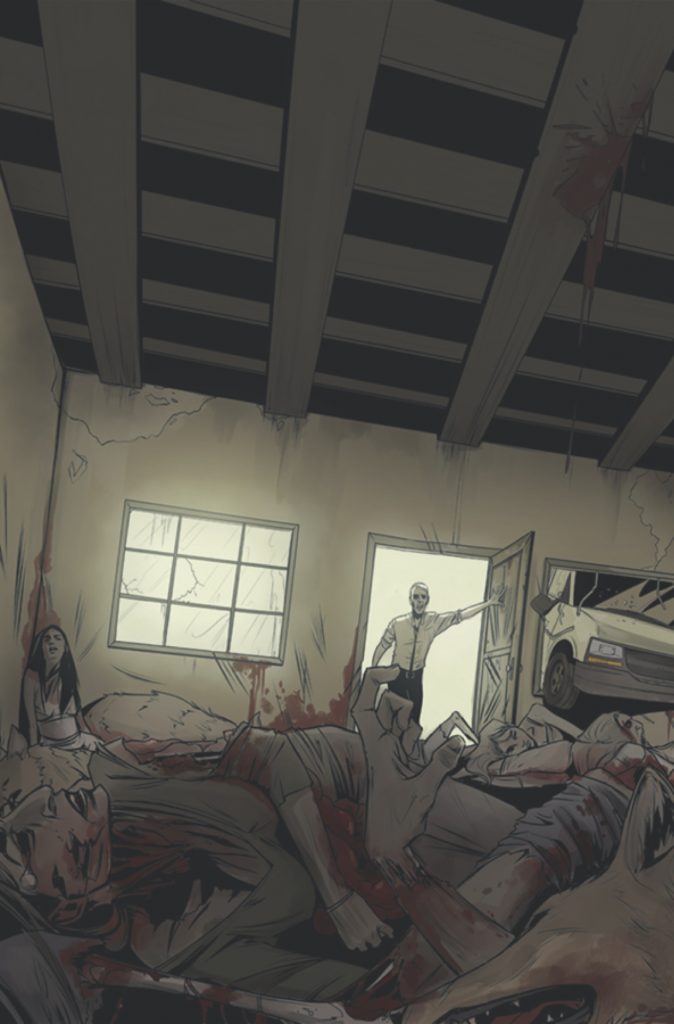 FS: Caitlin, your work on the book is gorgeous. I read it more once, partly to marvel over your linework. What is the collaboration like between you and Sean about how you wanted the look of the series to be?

Caitlin Yarsky: Thank you! Our process is really organic and has a good balance of collaboration and hand-off time. Sean sends me scripts and bounces ideas off me, and I throw in my two cents. Likewise I’ll shoot some visual concepts or ideas over and he’ll let me know his thoughts.

FS: Following up on that, Caitlin, one of the things that makes the art so engaging is that the kids look like real kids. They move like real kids. Likewise with the adults. Was that something you decided on early on in your design that you wanted to do?

CY: I definitely wanted the body language to reflect their ages and backgrounds as accurately as possible- especially Red, who I wanted to emphasize is still a kid, despite the gravity of her situation and the darkness around her.

FS: One of the things about issue 1 that was so smart on your part is to show the Coyotes just enough to build their mystique and danger without making their presence too pervasive in the story. Was that deliberate?

CY: For sure. I always felt that in horror stories, the less you show (at least early on) the greater the threat becomes in your mind. I figured if they were everywhere from the start, they’d probably seem less dangerous.

SL: Absolutely. I think when you have a monster you have two options: you either introduce it fully or you tease it. We are kind of recreating a myth in this book. I mean Werewolves have been around forever and the basics of their story are something everyone knows. But when you dig deeper and kind of explode the logic of them there are some great opportunities for drama and character.

I mean, a werewolf is, at its core, a primal version of us. It’s an isolated animal that can live on its own or in packs.

In the end, I want the audience to lean in. I want to the story to unfold at a pace that makes that happen. Building the mystique definitely helps that. 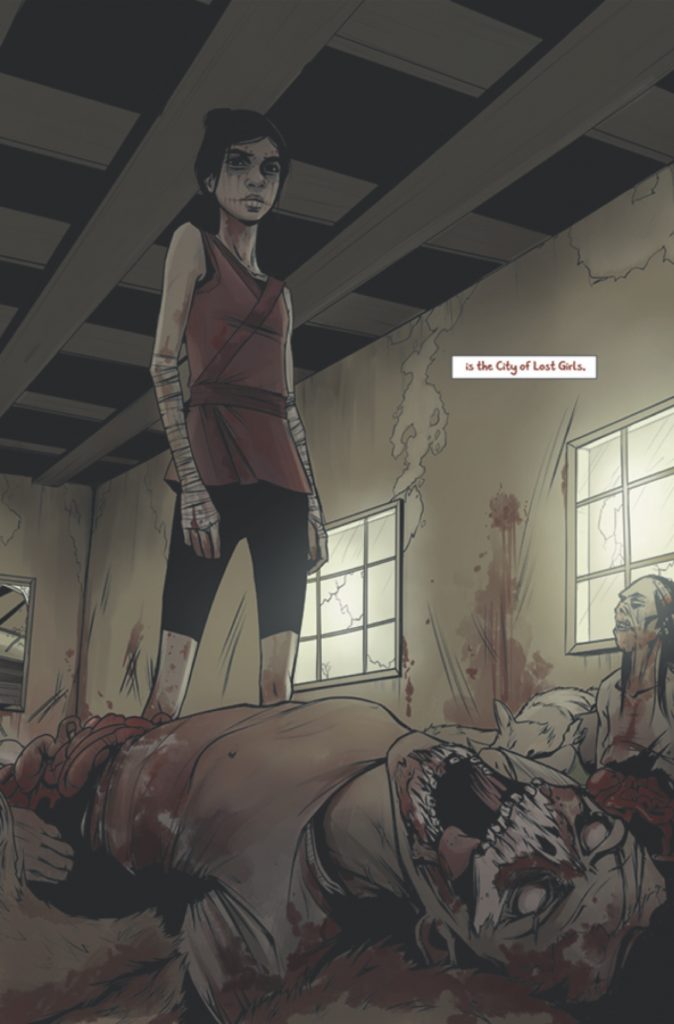 FS: When they show up, the coyotes are particularly menacing and are steeped in the supernatural. What can you tell us about the coyotes? Are they based on any myth or folklore? What kind of research went into writing the book?

SL: I used a lot of historical reference. I read about legal cases of people tried for being werewolves (some of whom were found guilty and burned) and I read a good amount of folklore from around the world. I mean, outside of a few movies and Halloween costumes I did not know a lot about Werewolves.

I wanted there to be a lineage to their existence, a world and a history they inhabited. This made for the supernatural connection. However, the background to how werewolves were seen/made all comes from some historical texts.

FS: I lived in Camarillo, California, for a time and saw many coyotes during that period. They could appear harmless during the day, but sounded menacing and ominous in the dark of night. What is it about the animal that made you two want to use it as a subject matter?

SL: I was obsessed with the animal itself and the human couriers that move people across the U.S.-Mexico border, who we call Coyotes. I liked that Coyotes move and attack in packs. On their own they are kind of harmless but when a group gets together there is a mob mentality to them.

And I agree, I think they are scarier at night. The noises they make. The idea of them traveling together.

FS: Is there anything you can tease about the series going forward?

SL: I’m really proud of this book and to be honest if nothing else Caitlin’s work on it is completely next level. Each issue is more and more dynamic.

Coyotes #1, written by Sean Lewis with Caitlin Yarsky on art, is on sale November 8th from Image Comics.

Underworld meets Sicario in this new series from SEAN LEWIS (SAINTS, THE FEW) and amazing new artist CAITLIN YARSKY. Hunted by a legion of wolves that roam the border, women are disappearing. The survivors band together to wage war. Detective Frank Coffey is trying to understand this mythic-level bloodbath when he comes across Red, a little girl with a secret and a sword. Ultra-violent and smart as hell, COYOTES transforms the everyday into a myth we can rally behind.