When creators Kwanza Osajyefo, Tim Smith III, and Jamal Igle launched their month-long Kickstarter for their comic book Black at the beginning of the month, they set a goal of nearly $30,000 to hit by February 29th. With ten days left to go before that end date, the funding campaign has more than doubled their initial target, and it’s not difficult to see why.

Beyond the fact that Osajyefo, Smith III, and Igle are all tried-and-true veterans of the comic book industry, each with impressive CVs on their own, the subject matter of Black is an intriguing one, a story that has yet to be told in the medium’s four-color confines. The creators pose the question, “What if only Black people had superpowers?” That question, coupled with the talents of Osajyefo, Smith III, and Igle, looks to address issues of race and superhero narratives in an honest, open way.

Mr. Osajyefo was kind enough to speak with us recently about Black, why Kickstarter was a good vehicle to get the project off the ground, and how representation in pop culture is such an important matter to address.

FreakSugar: Thank you so much for taking the time to speak with me. First of all, a huge congratulations for surpassing your Kickstarter goal for Black in less than half a month!

Kwanza Osajeyfo: Thank you. The response to Black has been incredible.

FS: For folks who might just be hearing of Black, how would you describe the book?

KO: I think the logline sums up the premise: “In a world that already hates and fears them  – what if only Black people had superpowers.”

The story begins with the lead character, Kareem, being racially profiled and subsequently gunned down by police. He survives somehow, coming to in the back of an ambulance. He escapes and is pursued by authorities but a man named Juncture saves him, taking him into an underground organization that helps Black people with superpowers. 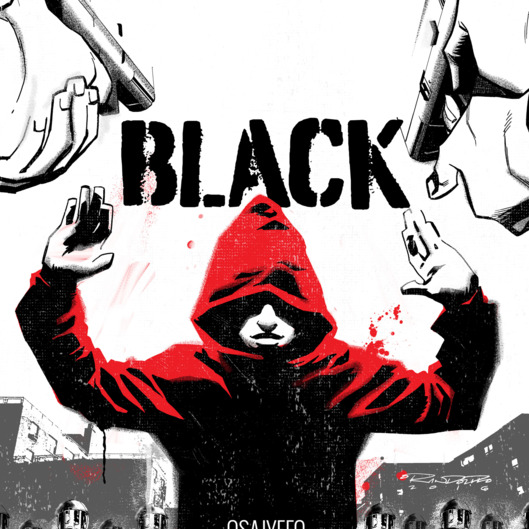 FS: What made Kickstarter the right vehicle to fund Black?

KO: We live in modern times, and Kickstarter is a widely known platform for building an audience. I felt it had the best reach and features for connecting people with the idea.

FS: I’ve read that part of the impetus for the creation of Black was to offer a counter to the Big Two’s cast of black characters and other heroes of color. What can readers of Black expect to see that offers an alternative to those portrayals in the major comic book publishers’ stories?

KO: I don’t think of it as an alternative so much as providing content with context in a space publishers are undeserving.

Black offers readers a wide selection of new characters to discover. The protagonists and antagonists don’t have to represent Blackness or any other race. Characters in Black reflect the variety of perspectives within the culture.

FS: What can you tell readers about the cast of Black and the world in which they live?

KO: They each have a different perspective on the phenomenon of only Black people having superpowers. Overall, Black is about the clash of perceptions, because humans are rarely motivated by something as base as good or evil, as opposed to power or survival. 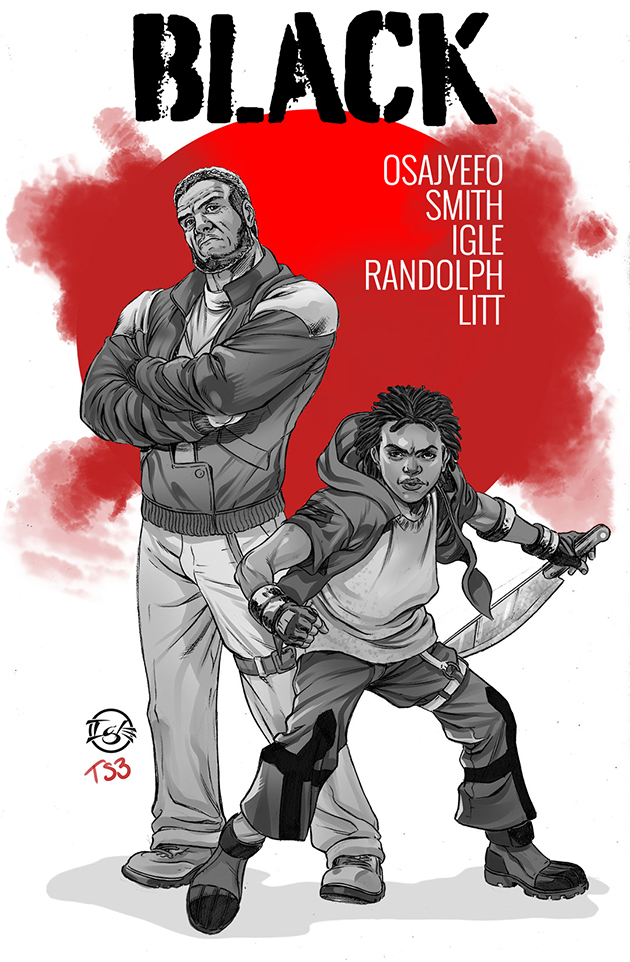 FS: There are obviously parallels between Kareem Jenkins’ story and the violence we see far too often against Black men and women by the police on the news with increasing frequency. How important to you was it to connect this story to those real-world counterparts?

KO: Very important. In regards to race in comics, that tether to actual social issues is what is missing from many publishers’ offerings.

Representation is important, but there is a context that comes with comes with race. Any writer worth their craft wanting to explore that will do their research, but there’s an obvious lack of internal perspective when something like Black happens outside of that sphere.

FS: What was the collaboration process like with Tim Smith III? What did the back-and-forth between you two do to add to the vision you have for Black?

KO: Tim and I are constantly refining. Characters are more interesting when they grow and evolve. If the characters in Black are in the same place by the end of a story, then it defeats the point.

I think the back-and-forth between us was crucial to distilling the right aesthetic for Black. 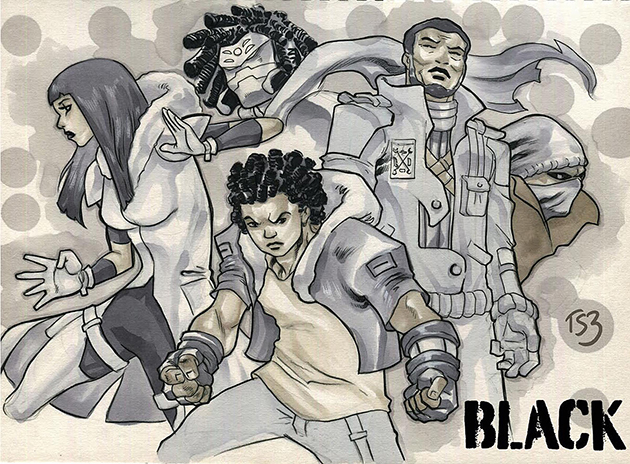 FS: The pencil work from series artist Jamal Igle that’s on display on Black’s Kickstarter page is gorgeous. Did you have a very clear idea how you wanted the characters and their world to look or did the two of you come together for an amalgam of concepts you both had in mind?

KO: I took the approach I did to building the creative team on Black because each of us brought something crucial to the process. World design is important when it comes to creating a consistent, believable world that is aesthetically engaging. Black isn’t a world of bodysuits and capes – it needed a more grounded yet still fantastic visual style. That is Tim Smith 3 all around, and why the characters of Black have unique silhouettes.

Visual storytelling requires tested expertise – that is Jamal Igle hands down. His skilled level of detail blends the fantastic with the familiar. Jamal can draw characters that look different, not just by costume but faces, body type, and locales.

Even though I felt we already had a strong squad, I knew Khary [Randolph] would bring us that curb appeal that is evident in the first cover of Black. I can’t say anything that will do that image justice. It’s the knockout punch.

As an editor I know the value of a great editor, and that’s Sarah Litt. Black couldn’t be a naval-gazing endeavor, and having a editor with a classic print and comics background provides us an intelligent barometer who understands where we’re trying to go and helps get us there.

FS: The initial goal for Black is a 120-page, six-issue story. Have you built in room for more tales of Kareem and the cast of Black beyond your first story?

KO: There is a lot of room to tell more stories, and the response to our Kickstarter has made it something to consider.