Editor’s note: This interview was conducted ahead of the launch of the Unearth series.

Some of the best horror yarns play with our fear of dangers not seen by the naked eye: disease and decay that prey on us well after it’s too late to stop them. As we’ve seen in the past year, biological, microscopic threats impact us all in different ways, from calming our resolve to help one another to scrapping everything and taking care of only ourselves.

Debuting in 2019 prior to our current pandemic, the Image Comics series Unearth—written by Cullen Bunn and Kyle Strahm, illustrated by Baldemar Rivas, and lettered by Crank!—doesn’t address what our world has experienced, but it does poke at our fears of the unknown, both microscopic and supernatural. Unearth follows a scientific task force that goes to Mexico to check out a disease that transforms flesh in ghastly ways and has made how swaths of the area unlivable. A cave system may be the source, giving way to an ecosystem that is less-than-friendly and a threat that may not be of this plane of existence.

Mr. Bunn was kind enough to speak with us about co-writing Unearth, the inspiration behind the series, the collaboration with the entire Unearth creative team, and creating a cast you can rally behind. 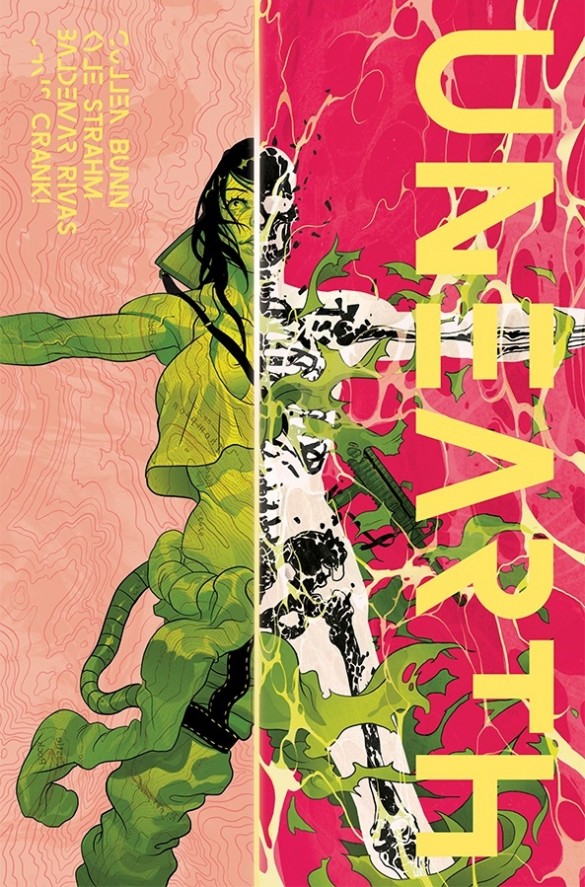 FreakSugar: For folks reading this, what can you tell us about the conceit behind Unearth?

Cullen Bunn: In a small village in Mexico, a nasty disease is causing horrible mutations. A group of American scientists and a military escort head to the village to check it out. The track the source of the disease to a network of caves. And when they enter the cave system, they are swept into a ghastly nightmare. That’s just how it begins, of course. The story of Unearth expands in some dramatic and shocking ways.

FS: The first issue is unsettlingly creepy and, at times, claustrophobic, like so many great horror tales. What was the genesis behind the book?

CB: Write what you know. This one time I got trapped in a cave and had to fight my way past nasty, slime-dripping mutants to get out. Okay. Not really. While I did do quite a bit of spelunking in my youth, that wasn’t how this story came to be (and I never encountered any mutants). Instead, this story came about through a love of horror that Kyle, Baldemar, and I share. We wanted to tell a horror story unlike anything that readers have seen before, and I think we’ve succeeded. 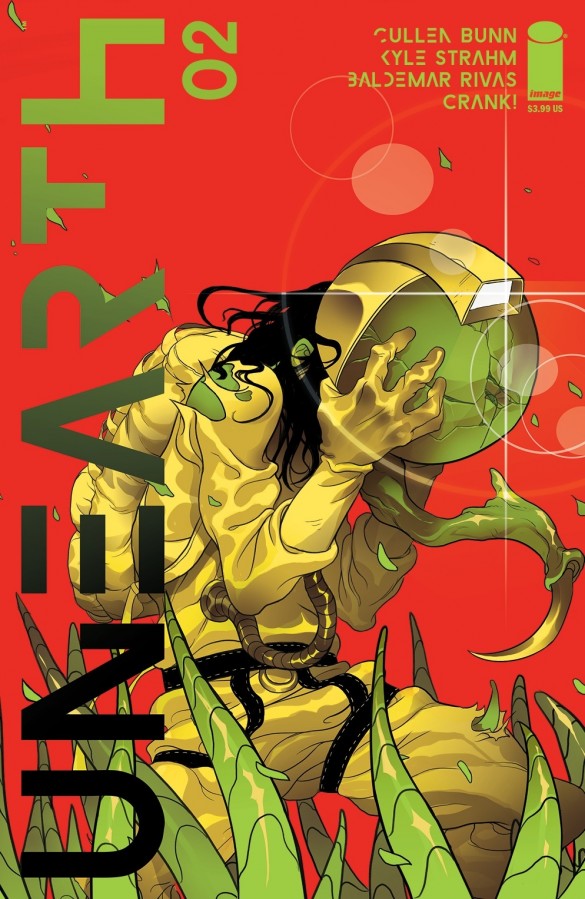 FS: In the first installment, we meet a wide and diverse cast of characters. What can you tell us about the folks we meet?

CB: Our heroes include a group of scientists and a military escort assigned to protect them in a hostile environment. These heroes have very different pasts, goals, fears, and motivations, and as the horror builds around them, we’ll start to see those differences both helping and hindering them. Kyle, Baldemar, and I wanted to make a group of heroes who readers could both agree and disagree with based on the situation. We also wanted heroes you could really root for and really worry about.

FS: Unearth, in addition to being firmly planted in horror, has its heels dug into science fiction as well. What was the inspiration for tackling the two genres in the comic?

CB: My two favorite horror movies–Alien and The Thing–are both sci-fi/horror mash-ups. And much of my favorite horror fiction melds horror and science fiction. The two genres just go so well together. We’ve got the genre built on exploring and expanding knowledge. And the genre of stumbling blindly into things man was not meant to understand. 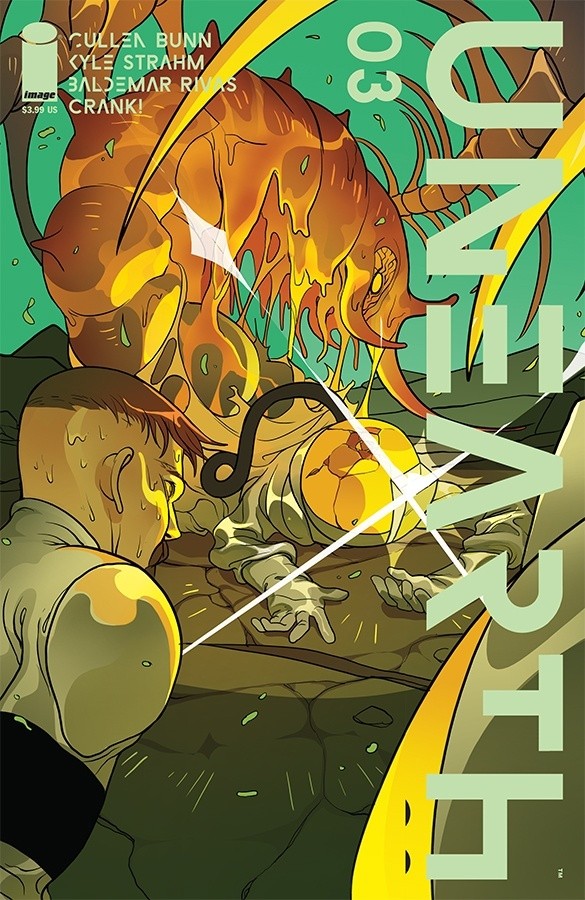 FS: It’s funny because I kept going back to Alien when I read the first issue insofar as how it made me feel, gripped and ill at ease. Are there any other stories besides Alien and The Thing that informed or inspired how you approach Unearth?

CB: There were many, I guess, in various ways. The Descent, The Cave, Aliens, Dog Soldiers. I really dug into my love of survival horror here. Of course, as the story progresses, there are other influences, too, but I don’t want to mention them for fear of spoiling something.

FS: The effects of the disease in Unearth #1 are unsettling to say the least. While the disease and its effects are fictional, was there any research you did in crafting your story?

CB: A little, yeah. There are some really, really terrifying diseases and parasites out there. I looked into a bit of that. Enough, anyway, to inspire some really ghastly effects of the diseases in this book. 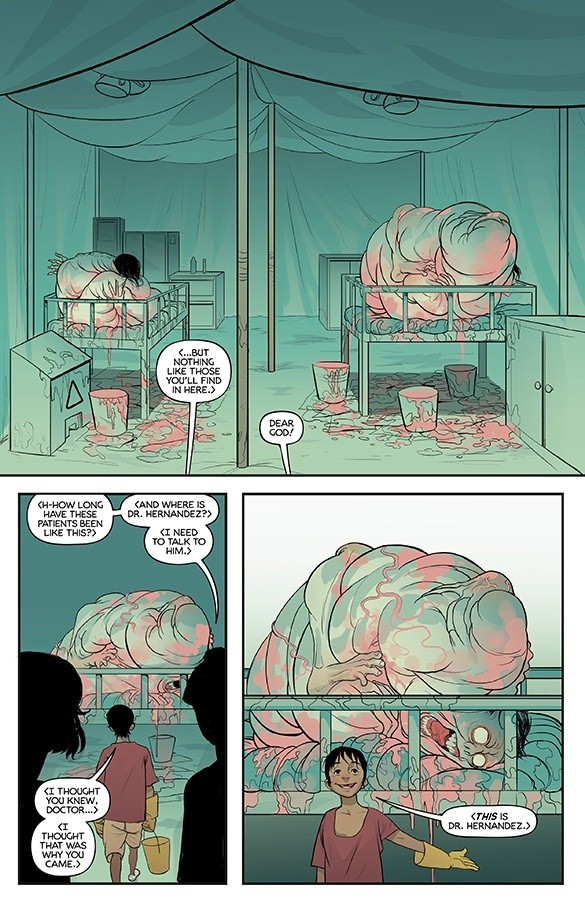 FS: The look of the book is something I haven’t seen before, with a mix of realism and straight-up body horror permeating so many pages. What was the discussion like about how the book should look?

CB: Baldemar had a lot of thoughts on this, and he dug in straight away with concept sketches that just blew us away. I think he’ll take it as a compliment, but I see a lot of Junji Ito in his work. And I love Junji Ito.

FS: Following up on that, what was the collaboration process like for the three of you when tackling the book as a whole?

CB: Early on, the three of us talked about the things we wanted to see in the book. Then, Kyle and I outlined each issue. Once the outline was done, Kyle and I broke up scripting duties pretty evenly. 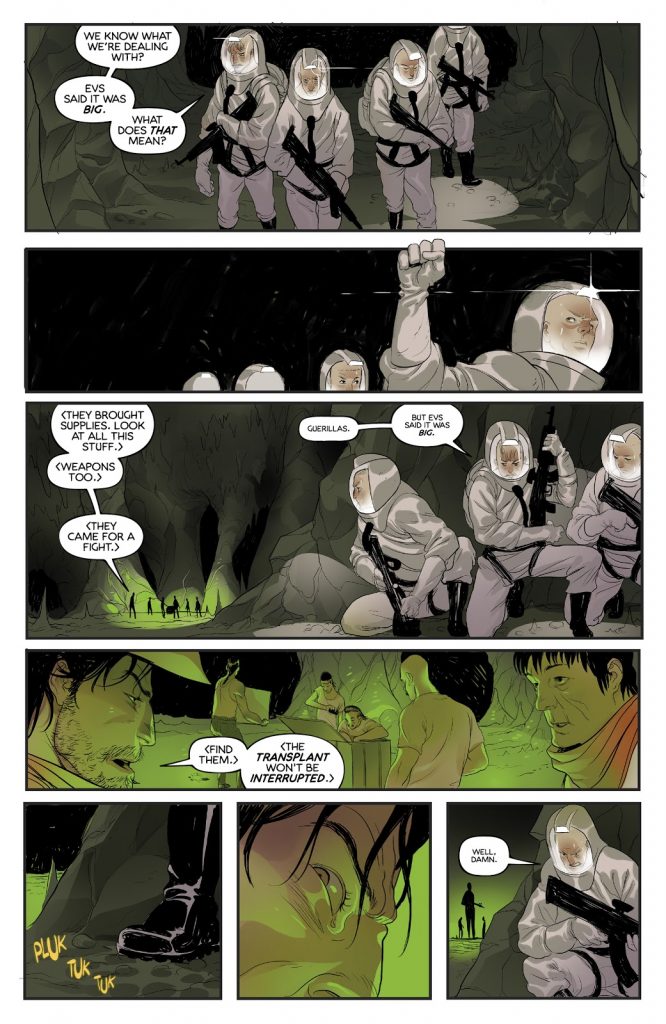 Volumes 1 and 2 of Unearth are on sale now from Image Comics:

When a flesh-warping disease ravages a remote village in Mexico, a scientific task force travels to the inhospitable area to investigate the contamination. Tracing the source of the disease to a nearby cave system, the team discovers a bizarre, hostile ecosystem and a supernatural revelation from which they may never escape.