With the series premiere of The CW’s The Flash less than two months away, many fans — myself included — are hoping that that the time flies by as fast as the Scarlet Speedster himself. The CW must sense that building anticipation, as the network just released this new teaser poster for the Arrow spin-off on Tuesday.

The poster itself features the Fastest Man Alive speeding through the streets of a darkened Central City with the tag “Discover what makes a hero.” And what makes a hero? The Easter eggs scattered throughout the promotional art for the Arrow spin-off suggests that it might be the folks he encounters along the way. 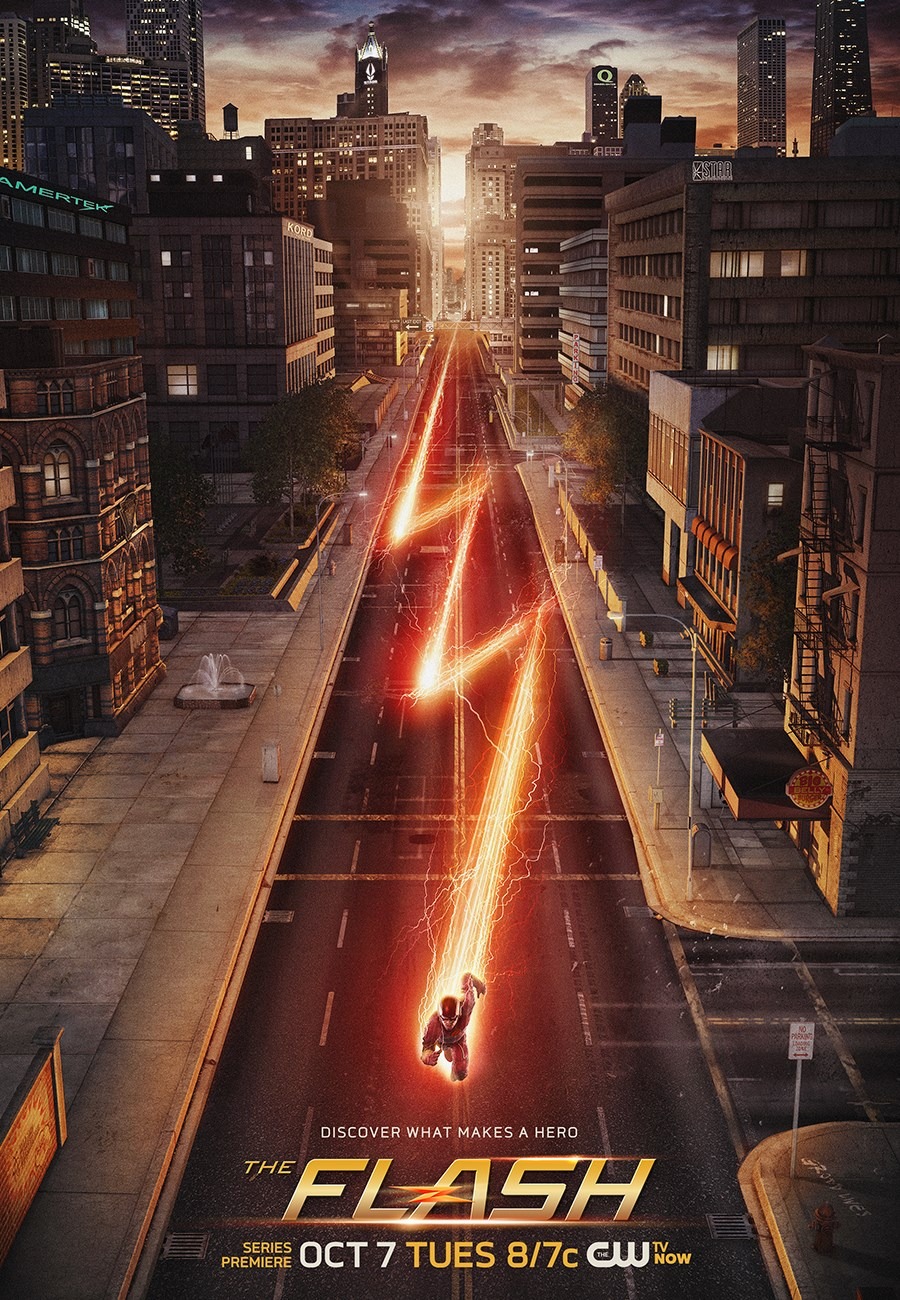 One of the buildings in the promotional art bears the name AmerTek. In the DC Comics tales, AmerTek is a military industrial company that John Henry Irons, the replacement Superman known as Steel and who became a hero in his own right, worked for early in his career as an engineer. If you squint hard enough at the building next to AmerTek, you can see the letters on spelling out Kord Enterprises, which has been mentioned on numerous occasions on Arrow. In the comic books, inventor Ted Kord engages in superheroic derring-do at night as the Blue Beetle. Further, we can see buildings bearing the names Queen Consolidated (a la Arrow) and Star Labs. Perhaps they will meet up with Brandon Routh in his role as The Atom on this season of Arrow.

While these names may be just nods to observant fans, it’s likely that they were chosen for a reason, as they may allude to heroes and villains that The Flash will face during the course of the new series. Why were these particular names and the characters connected to them chosen, though? Honestly, I can think of two glaring reasons. One, most of the names — Kord, AmerTek, Star Labs, Queen — have some sort of connection to The Flash during his time as a Justice League member: Blue Beetle, Steel, Green Arrow. While Warner Bros. already has a Justice League movie in the works, this could be a sort of build-up to the CW’s own version of assembled crusaders. Smallville tried something similar during its run to mixed results, with Clark teaming up with Oliver Queen/Green Arrow, Arthur Curry/Aquaman, Victor Stone/Cyborg, among others.

Another reason for the appearance of those specific names could be, frankly, availability. For its Justice League franchise, Warner Bros. seems to be focusing on its “big guns,” i.e. Superman, Batman, Wonder Woman, leaving the B-squad up for grabs. I love Blue Beetle and Steel, but, Shaq’s film notwithstanding, I don’t think we’ll necessarily see them in a DC movie any time soon.

The CW released a teaser trailer for the series earlier this month, which used verbiage that many feel is a nod to a possible multiverse. The DC Comics on which The Flash is based is filled with parallel worlds and alternate dimensions, with The Flash at the center of a story, Crisis on Infinite Earths, which focuses on the concept of a DC multiverse. The various allusions in the teaser poster just released could also serve as a signal that Barry Allen might encounter heroes and villains from parallel Earths on his heroic journey.

Regardless of what the teaser poster or trailer mean, we’ll know soon enough. The Flash premieres October 7 on The CW.