The Titans—featuring such characters as Nightwing, Wally West, and Donna Troy—is one of the most beloved superhero teams not just in the DC Universe, but, arguably—by me, for one—in all of comics. However, since the New 52 line-wide relaunch in 2011, the core group of Titans really haven’t had the chance to play in the same sandbox together.

With DC Comics’ Rebirth massive story arc, writer Dan Abnett and artist Brett Booth are looking to bring the band back together, starting with this week’s Titans: Rebirth one-shot. Mr. Abnett and Mr. Booth spoke with me recently about how their recent Titans Hunt miniseries leads into where we find the crew in Titans: Rebirth, what legacy means to the team, and how the Titans stand shoulder-to-shoulder with the Justice League of America. 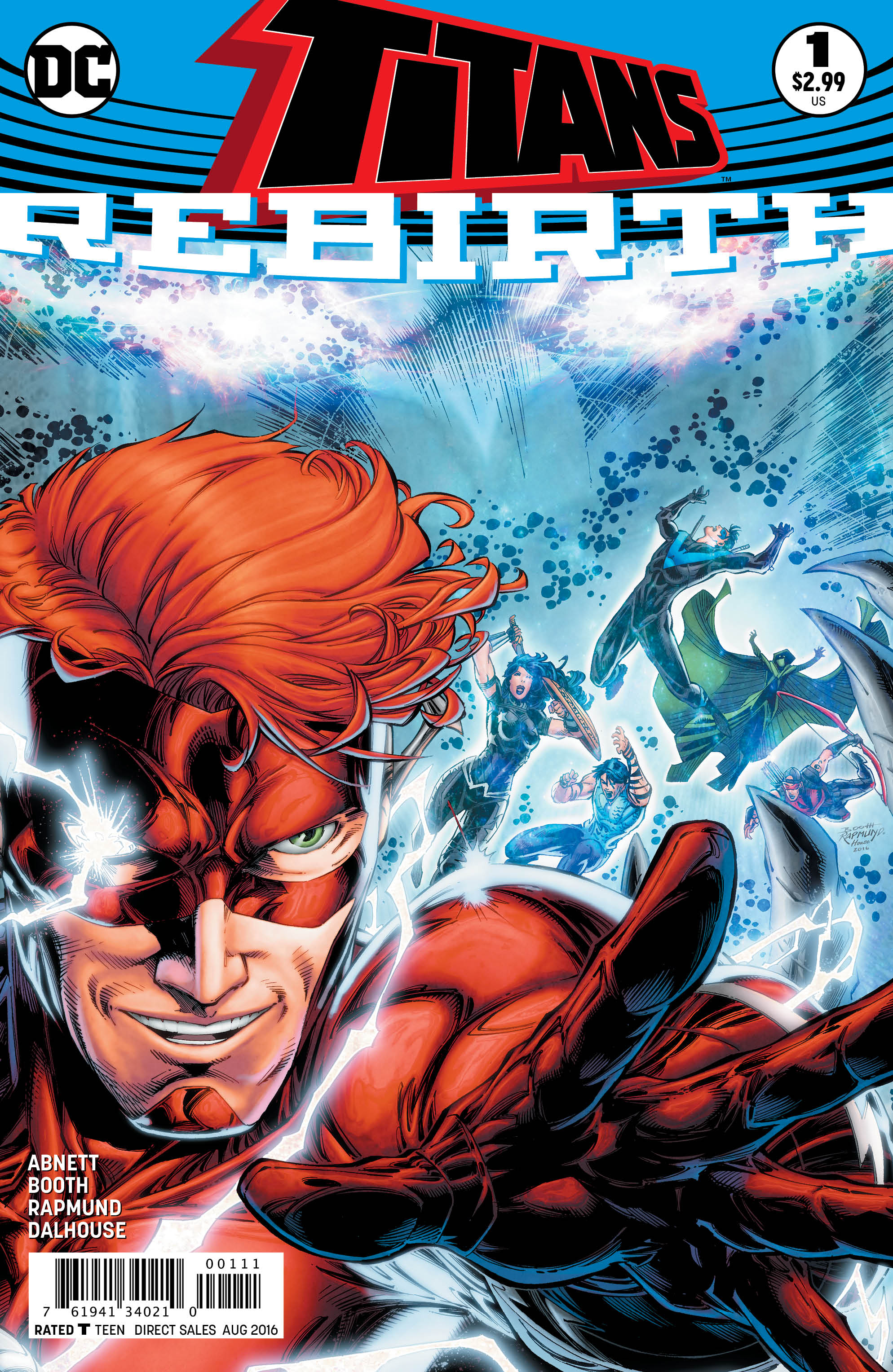 FreakSugar: Dan, I asked a similar question when we spoke about Aquaman. This goes for both of you: What was your entry point for the Titans? I was still young in the early 80s, but I started re-reading Wolfman and Perez’s stuff as soon as I began reading comics. I also think Geoff Johns’ run was a seminal work. I was wondering how those entry points influenced how your approach the Titans now.

Dan Abnett: My entry point was certainly Wolfman and Perez, which I think was such a benchmark book. It’s a favorite of Brett’s, too. The early era in the 60s was before my time, but I have to say it was something I specifically and deliberately looked to when I was working on Titans Hunt. I was trying to capture some of that crazy, wild storytelling into what I was working on.

Brett Booth: My entry was also the Wolfman/Perez stuff. I got in right after Crisis on Infinite Earths, so Wally West was The Flash when I started reading comics. My friend who got me into comics was a huge Titans fan, so I went back to his place and read all the stuff that he had to get caught up. 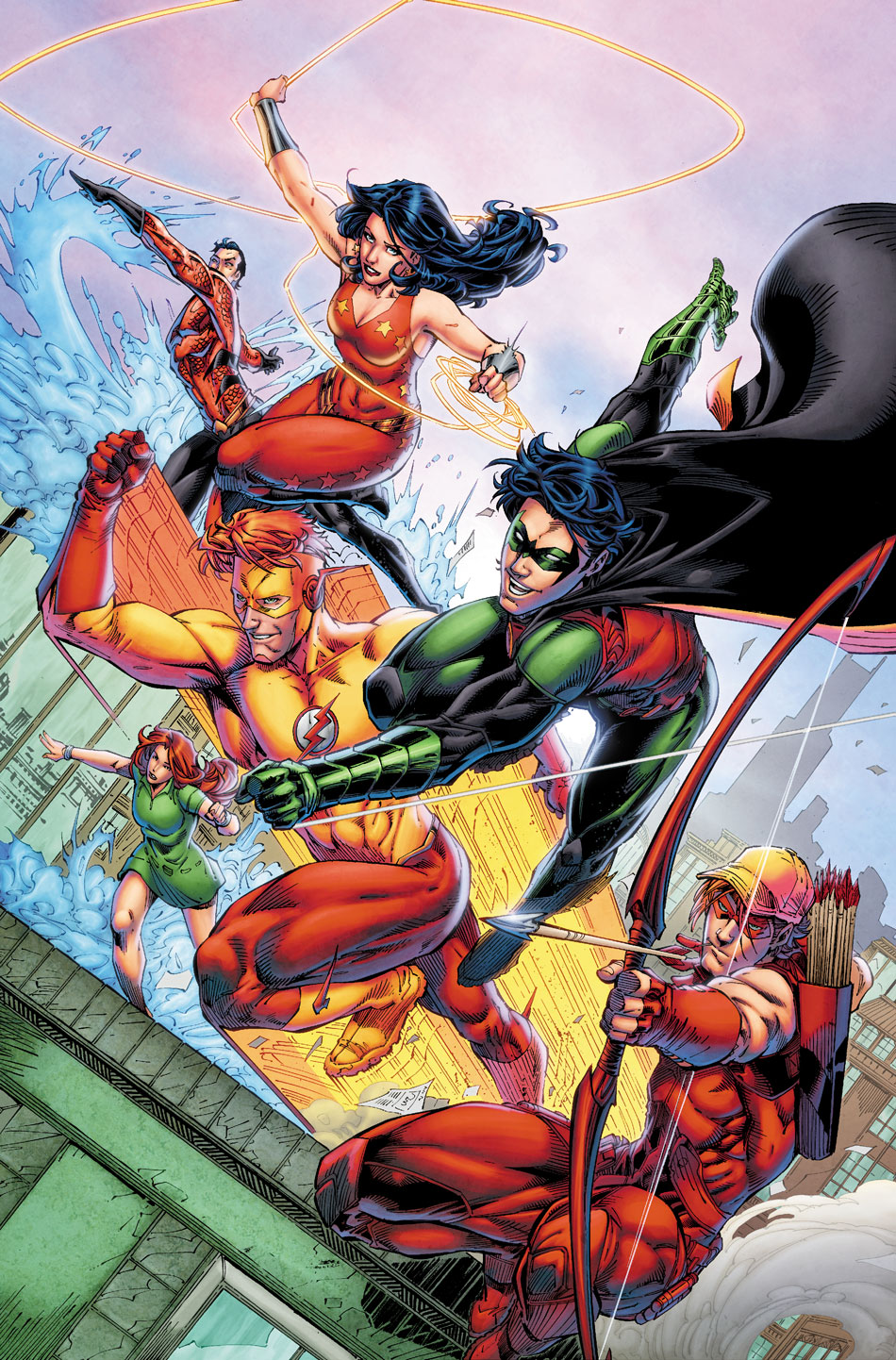 FS: Dan, where do we find the crew at the end of Titans Hunt #8 into Titans: Rebirth?

DA: At the end of Titans Hunt, they’ve all reunited—with one notable exception—and have recalled that they were at team at the beginning of the New 52, but that had been wiped from their memories. Once they got together again, they worked as friends and knew intuitively they were friends, even if they didn’t recall working with each other.

Also, they also know something is missing, the heart of the team is missing, to the point they’re almost yelling it at the readers. And that missing piece becomes a rallying cry for them to be together. That piece is Wally West, who returned in DC Comics: Rebirth #1. They’re the ones who will most take seriously what Wally has to say. And they’ll stand with him as he tries to figure out the mystery that only he has any clue about whatsoever. That reunion is very much the starting point into the Titans: Rebirth one-shot and will carry us through as we continue the ride into this book. 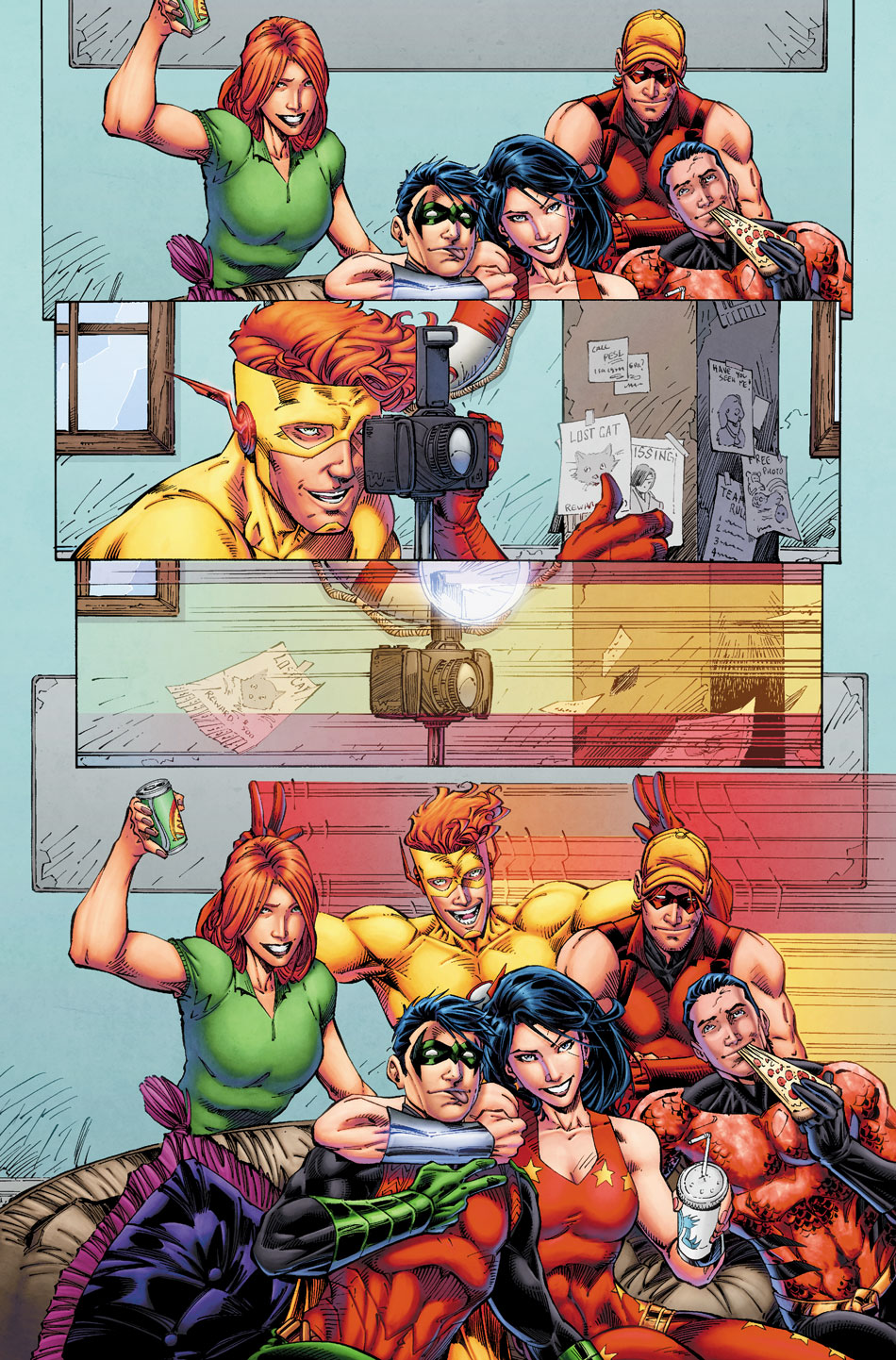 FS: Brett, in terms of character design, how do you bring your own sensibilities to the characters while giving the nod to the classic team reuniting?

BB: That’s the crucial thing to learn how to do. I have to look at the old costumes and the multiple versions of the old costumes and then try to get what the feel and key elements of the costumes are. Dan gave me some key notes about what he’d like to see. So it’s a juggling act to see what works best for the characters. I basically look to see where I want the characters to go. I thought of a world without a Justice League and thought about how the Titans’ costumes would look if the JLA didn’t exist.

Wally’s costume was a little different because of the Rebirth one-shot. Jim Lee came in and added a few things and then I went back and added some things. Just minor details here and there. 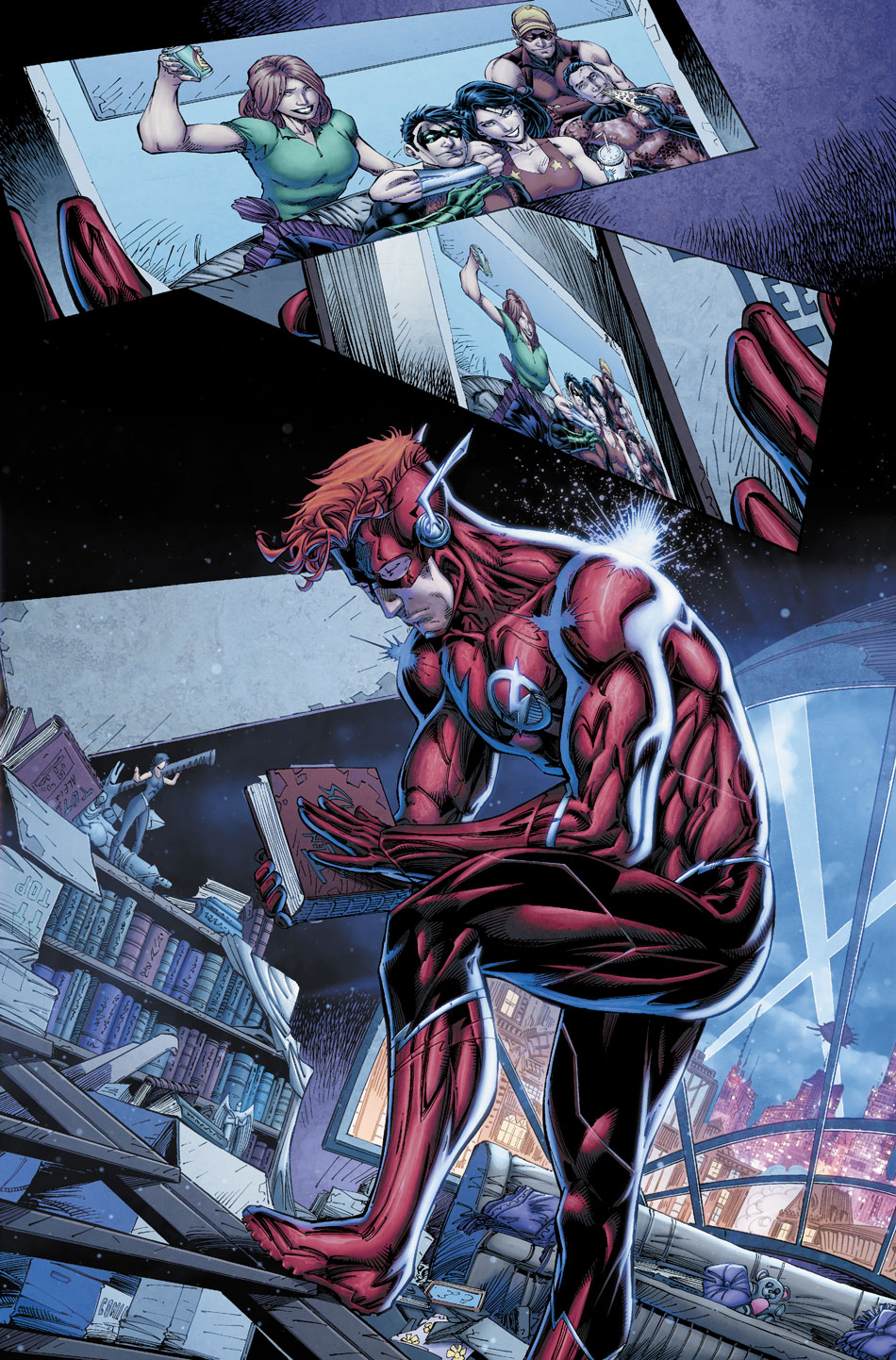 FS: Dan, a few years back around the time of Infinite Crisis, more than one DC character mentioned that Nightwing was one of those characters that everyone in the DC universe respected. I think we can take that a step further and say that the Titans as a whole are a good bridge between the younger and older generations. What do you think the Titans’ function is in the wider DCU?

DA: I think their function has always been as a legacy group. Not always, but the group has generally been composed of characters who are either successors to or junior versions of a great DC Comics hero. They have always been a group that’s in training. It’s a good demonstration of a generation that will one day be as great as their predecessors.

Dick Grayson is a very special character indeed in terms of the role he’s taken as he’s grown up. Wally West, likewise. I think I might say he’s the first younger version of a hero to permanently replace his predecessor.

These aren’t just kid versions, they’re not just wannabees, they’re heroes who have proven who have proven they can stand side-by-side with their predecessors. To me, the book represents one of the great things about the DC Universe: its longevity, its tradition. One of the things we hope to do is show that it’s not a matter of “one day,” but that the Titans are already a potent alternative to the JLA. You don’t call the Titans if the Justice League is busy. You choose which one you want because the Titans deliver just as much as the Justice League does. This is the moment that they really graduate into that bigger league. 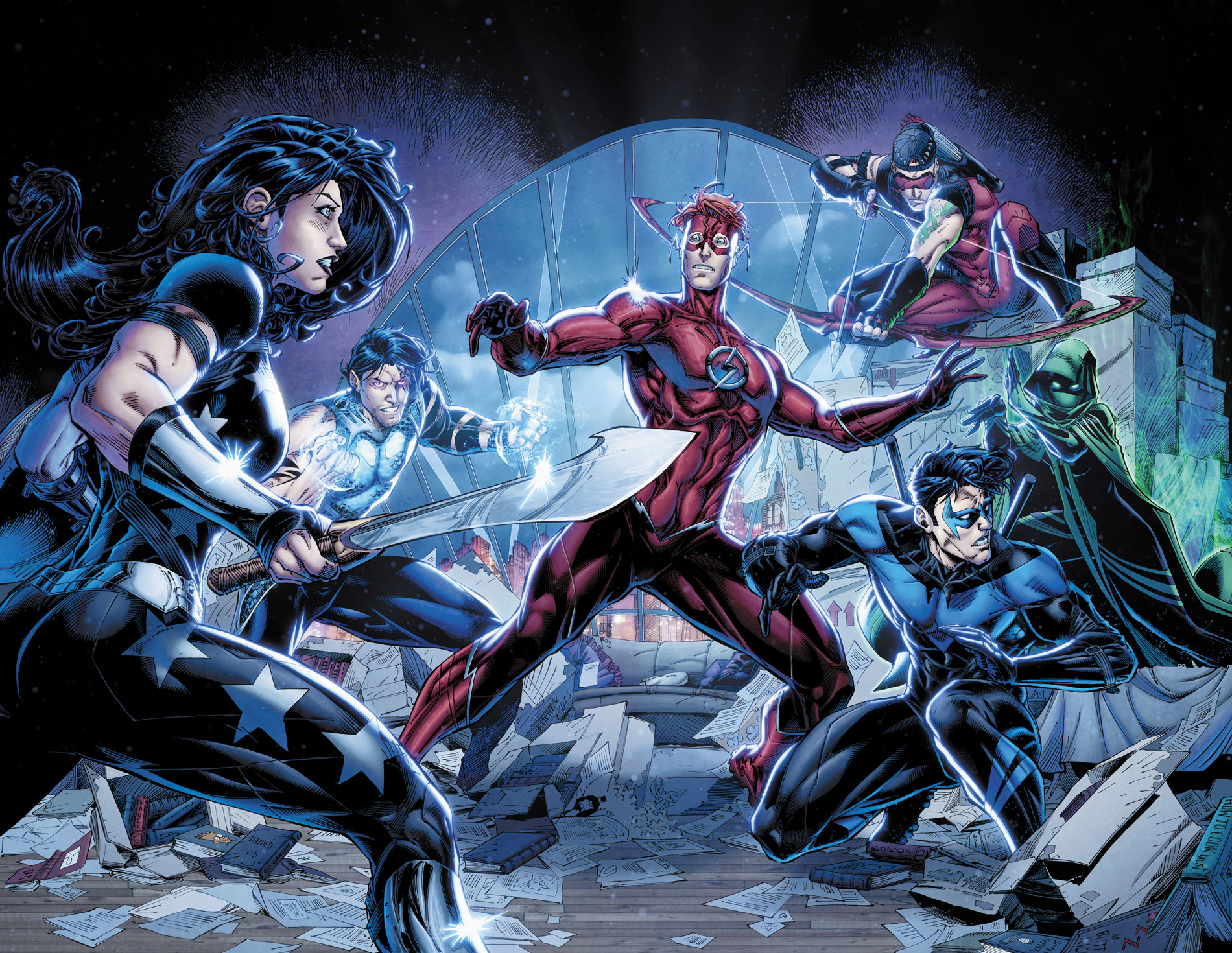 FS: This is for both of you: Which character were you most itching to get your hands on with this relaunch?

DA: We both love that character.

BB: He’s our favorite character. He’s alluded to in Titans Hunt, but you never actually got to see him so I didn’t get to work on him. He’s the one character no one has got the chance to play with.

DA: That’s been enormously exciting for us. We share the readership’s excitement that he’s back. From the point of view of all the characters, I think it’s a matter of letting them all shine. Dick Grayson is a character like Wally who’s strong. But we want to give a properly good focus to Donna Troy and Roy Harper and Garth. Really, I’m looking forward to writing the Titans as a team. It’s not just a few strong characters and some lightweights. It’s a group of really strong characters who really shine. 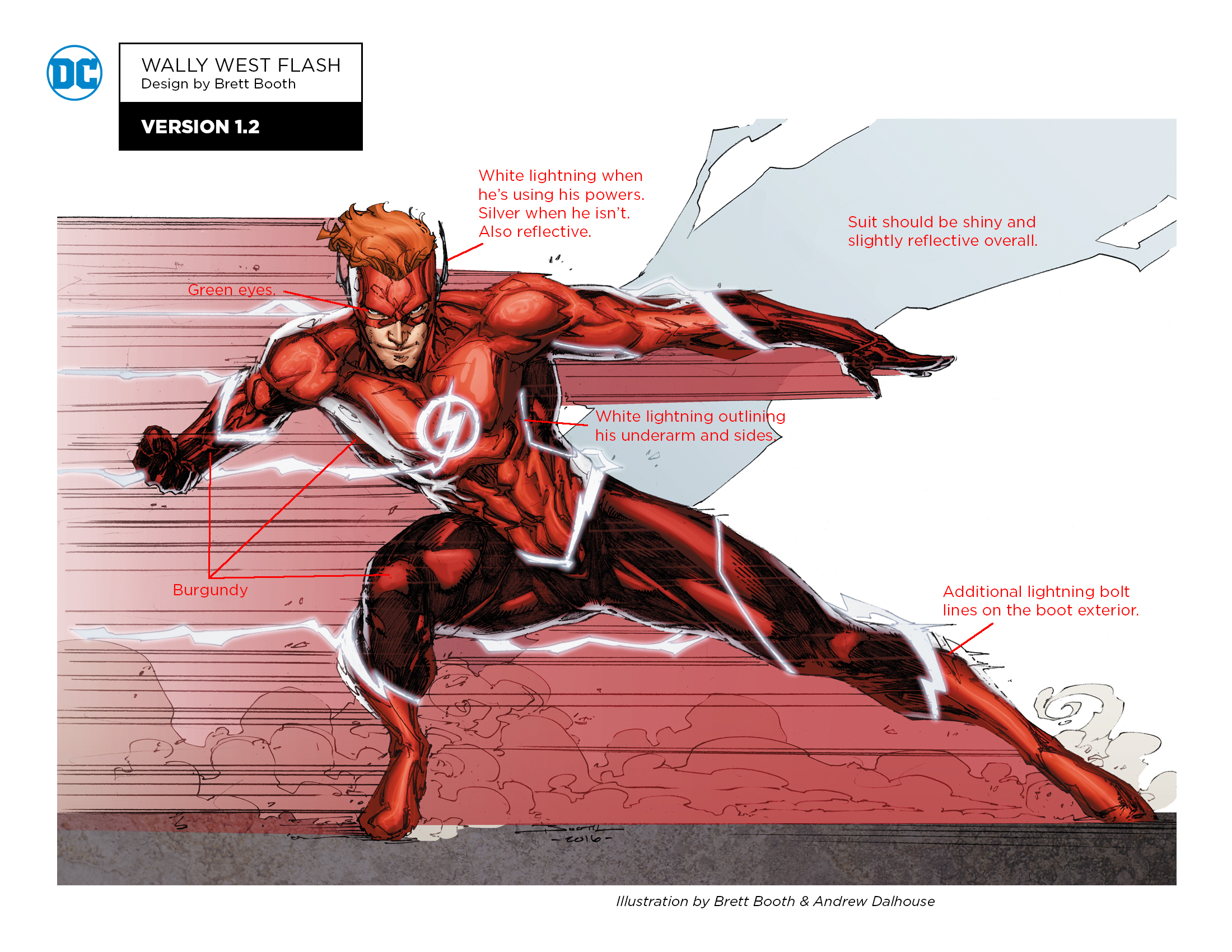 FS: Past Titans: Rebirth, what can we expect moving forward?

DA: Obviously, we have a great deal of Rebirth stuff to deal with up front. More broadly, it’s a run of great adventures starring beloved characters. It’s the fun and energy of seeing them doing that. It’s the return of classic villains and classic threats that’s just Titans all over, but also new threats to add to that legacy.

Titans: Rebirth #1, written by Dan Abnett with Brett Booth on art, is on sale now from DC Comics.

From the official issue description of Titans: Rebirth #1:

Friends. Teammates. Titans. Donna Troy, Arsenal, Garth, Lilith and Nightwing were all that and more until a mysterious force erased their memories, forcing them to forget what they could accomplish together. Reunited with their memories returned, the Titans must destroy the interdimensional demon that broke them apart and threatens reality itself.