There’s a reason that Las Vegas has an allure to so many storytellers. It’s a place where people can take a risk to remake their lives beyond their wildest imaginings–or lose every last penny and foothold of stability. Rolling the dice, taking a risk, possibly becoming reborn–that’s Vegas.

And that’s also Vegas for former boxer Stanley Dance in creator Dan Panosian’s Slots, debuting next week from Image Comics. In Slots, Stanley finds himself at the end of his wits, called back from the abyss to Vegas by way of an ex. Mr. Panosian spoke with us recently about the conceit of Slots, why Las Vegas is such a treasure trove of stories, and why you shouldn’t expect any heroes in Slots. 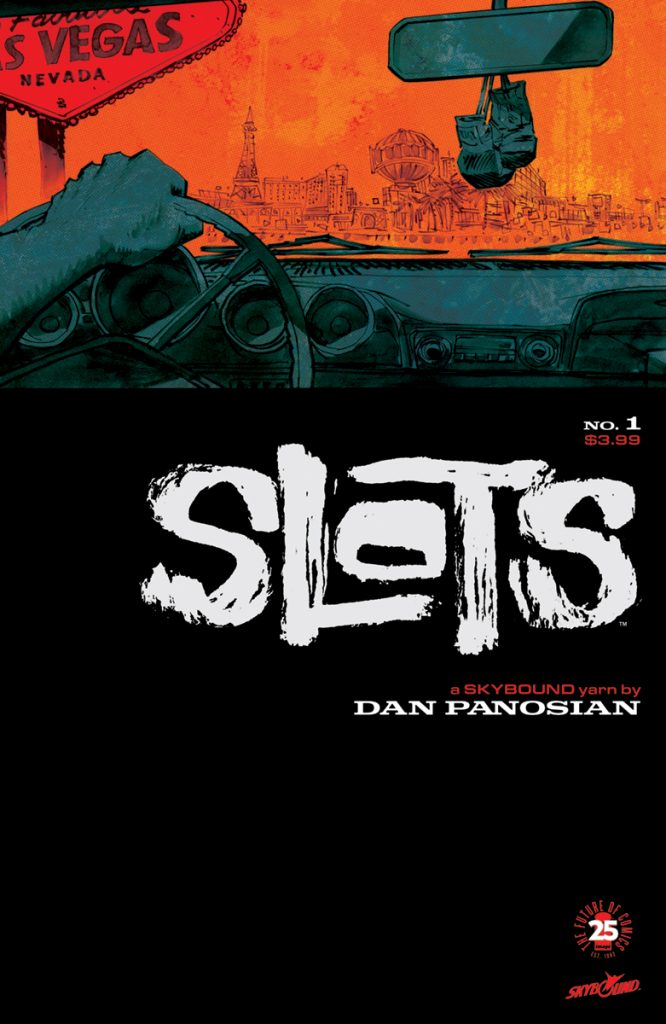 FreakSugar: First of all, thanks so much for agreeing to the interview. I loved the first issue!

Dan Panosian: Thanks so much! Very glad you dug it!

FS: For folks considering picking up the book, what can you tell us about the conceit of Slots?

DP: I think it’s easy for us to fall into various slots in life and become pigeon-holed.  Slots, compartments, labels. Sometimes other people put us in those positions -but sometimes we put ourselves there.  Do we stay, do we go…? So, yes, there is a conceit to the title and the little play on the popular game of chance. 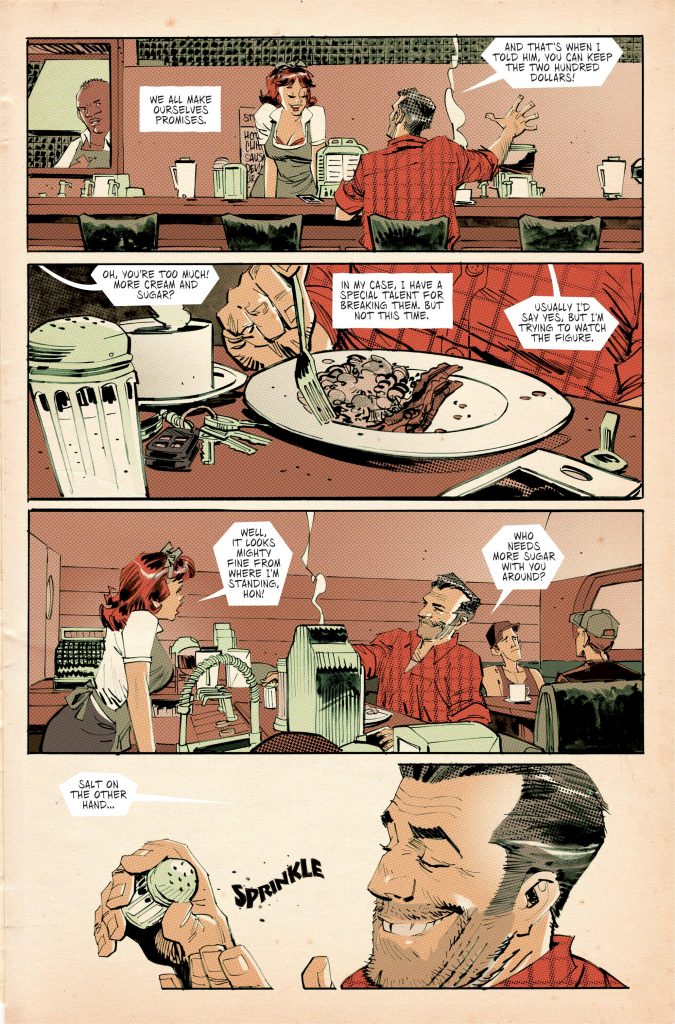 FS: Slots seems like a story you’ve had gestating for a good long time. What can you tell us about the genesis of the book?

DP: The best advice in life always seems to be, “Do what you love most in life.” So I took all of my favorite things, stirred the pot and out poured this book. I’ve enjoyed every bit of it. It’s a beautiful and rare feeling.

FS: Stanley Dance, the series’ through-character, feels like a quintessential Vegas protagonist on the surface, but has a unique story all his own. (Love the name, by the way!) What can you tell us about Stanley and where he finds himself at the beginning of the issue?

DP: He’s at the end of his rope. He feels he’s gone about as far as he can go and he’s ready to call it quits. He lives on luck and he’s all out. He’s a very superstitious guy though, kinda perfect for Vegas, and he thinks fate intervenes and gives him a sign to carry on. It could have been a bird landing in front of him.  Rain.  Anything really. In this case, it was a text message.  It doesn’t take much for him to reconsider carrying on.  He decides that he’s going to change his life. He’s never been the definition of a bad guy but you certainly wouldn’t label him as a good guy either. So his new life path is very foreign to him. Let’s just say it isn’t a smooth transition. 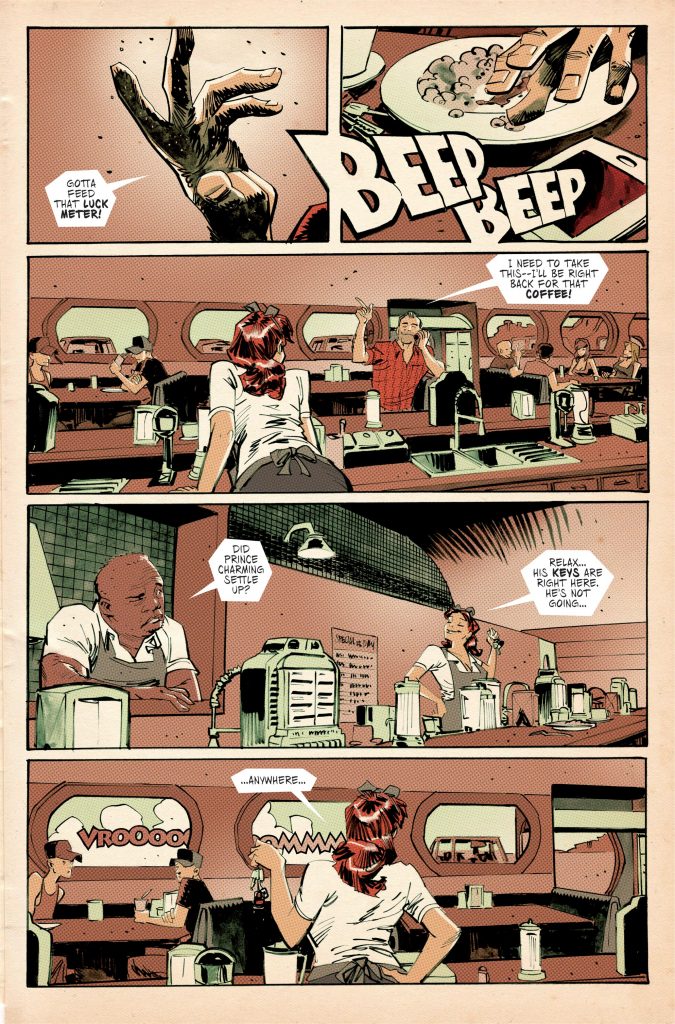 FS: Stanley eventually heads to Vegas at the start of the issue. What draws him to Vegas?

DP: An ex. She could be the one that got a way. But as it turns out, he never stuck around or fought hard enough for anything in life up until now. She’s battling to keep her small casino afloat against an old rival of Stan’s.  To be fair, he has many rivals. He’s burnt a lot of bridges and at this point in his life, everyone has something against him.

FS: There’s a bit in the beginning of the issue in which Stanley talks about broken promises, but before he can do anything about them, he gets the call for help. Vegas seems to be a place that’s used in some stories to tell tales of redemption and second chances. What’s Vegas represent to Stanley, if anything? Is there something about Vegas that has burrowed into Stanley’s DNA?

DP: It’s the closest thing to a home he’s ever had. It’s a place of dreams. Fortunes are won and lost there. It almost doesn’t feel real at times. So it’s perfect someone like him. The same man trying to ruin his ex’s life, ran him out of Las Vegas years ago. Stanley is coming back to reclaim his life, his family and basically what’s left of his soul. 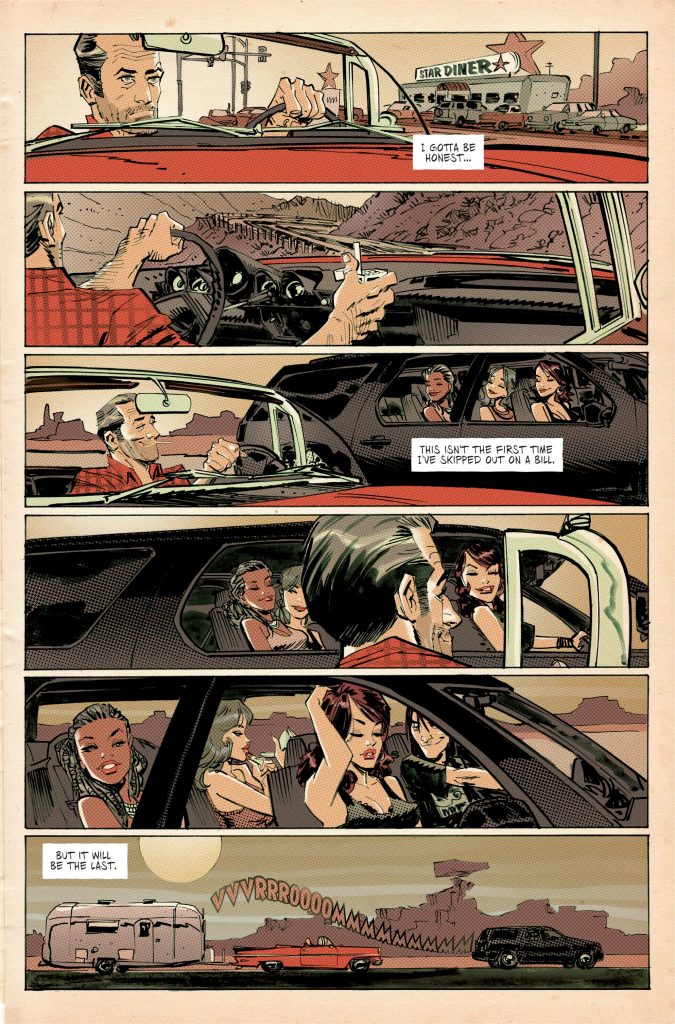 FS: The first issue is gorgeous and has a very lived-in feel about that fits the story perfectly. How did you decide on the look of the comic?

DP: Part of this book’s pitch was, “Old Vegas meets New Vegas.” A retro inspired look that tackles the current landscape of downtown Las Vegas seemed like the right fit. I still draw on paper and use a brush. I love that old school look and feel of comic books from when I was a kid. I also was very into the comic books and magazines from the generation before mine. This may sound a little weird, but I always felt there was something dangerous about EC Comics, Heavy Metal Magazine and the Warren Publications like Eerie and Creepy magazines. There’s a vibe that is missing today in the comic book culture.

FS: While I know nothing about the boxing world, there seems to be a real authenticity woven through the issue, both about boxing and Vegas in general. What kind of research did you do in the process of writing Slots?

DP: My father was a pro boxer when he was young and he loved the sport. He also was very into martial arts when I was growing up. We would watch a lot of boxing and we would train together.  It was one of the few things we connected on. Well, that and comic books.  He loved those too. So even when we were at each other’s throats, we could always discuss boxing and comic books.  Before he passed away he ran an ad agency and taught me a great deal about drawing and design. 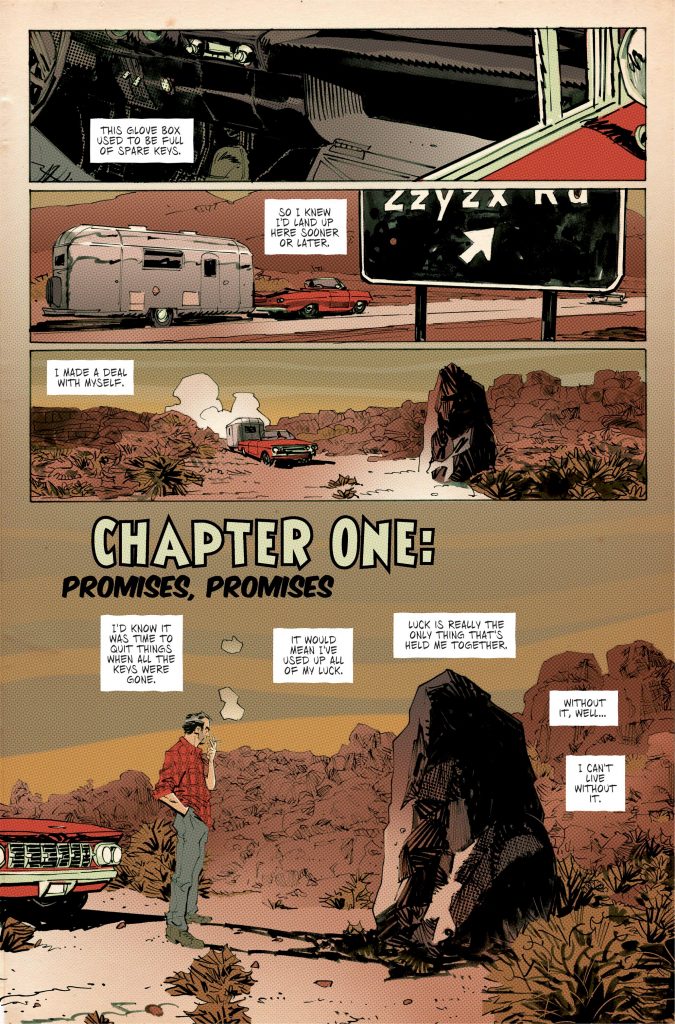 FS: For you, is there some quality or qualities about Vegas that particularly draws you in as a writer?

DP: Vegas is a strange and beautiful place. There’s hope there. Lots of it. But there’s also so much pain. It takes a special breed to live there and thrive. Or live there and survive for that matter.  It’s unique in this country. For me it feels like I’m walking around with living and breathing Steinbeck characters.

FS: Following up on that, are there any hallmark Vegas movies or other stories that have influenced your work on this book?

DP: The movie Hard Times with Charles Bronson had a real effect on me. Casino. Leaving Las Vegas. I loved the movie Killing Them Softly. All of those movies had an effect on this book.

FS: Is there anything you can tease about what we can expect in Slots moving forward?

DP: Don’t expect any heroes in this book. There are no heroes in Slots. It’s a book about redemption and second chances. As far as teases go, there are lots of little Easter eggs within the pages but I’m not going to give away anything. I want you to hop on board and enjoy the whole ride. Cheers!

You can say this about the life of Stanley Dance: he did it his way. Unfortunately, his way never took getting old into account. Now, the former boxer is on his last legs, looking for redemption…but he’ll settle for going down swinging. Roll the dice with superstar artist DAN PANOSIAN as he creates a bold and breathtaking vision of Las Vegas, where everything old can become new, and superstition influences how the chips fall.