Daniel Kibblesmith is no stranger to comedy. As a writer on The Late Show with Stephen Colbert and author of How to Win at Everything: Even Things You Can’t Or Shouldn’t Try to Win At, the WGA award-nominated Kibblesmith knows his way around crafting thoughtful observations, using comedy as a vehicle.

This Wednesday, Kibblesmith will debuting a different type of wordsmithery in Valiant Comics’ Valiant High, debuting as part of the comiXology Originals line, following such Valiant mainstays as Bloodshot, Archer and Armstrong, and Ninjak in the treacherous waters of high school. Mr. Kibblesmith spoke with me recently about the genesis behind the book, how his work on Late Show informs his work, and how his personal experiences influenced how he approaches the series. 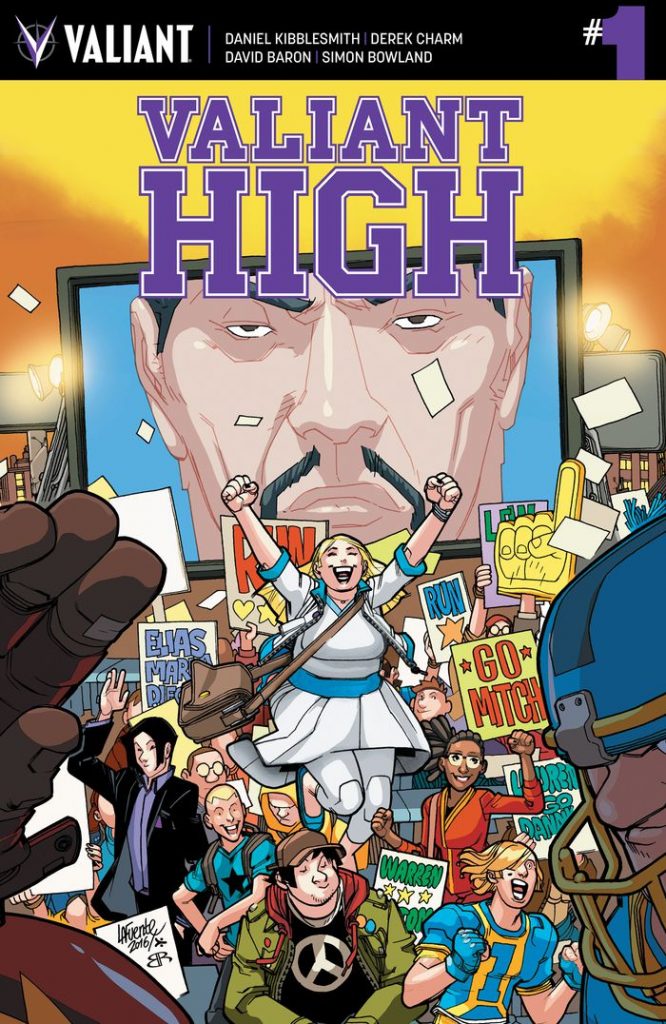 FreakSugar: For folks who might be considering reading the book, what can you tell us about the conceit of Valiant High?

Daniel Kibblesmith: Valiant High is your classic High School Alternate Universe story, (Think X-Men: Evolution, Smallville, or Marvel’s Avengers Academy mobile game). Basically, we’re taking Valiant’s universe of superheroes and mapping those personalities onto the archetypes of high school stories. So you get to bounce those characters off each other in a world of cafeteria fights, mean girl drama, and unrequited crushes galore.

FS: How did you become involved with the series?

DK: I was asked to pitch on the concept by former Valiant Editor Tom Brennan, who’s now fighting for Truth & Justice in real life for New York City government. I had written a few pages for some Valiant Anthology issues — Bloodshot #25, the all-humor Unity #25 — and people at Valiant knew I was interested in doing more superhero-ey stuff in addition to coming from the world of comedy. They thought a lighthearted story outside of continuity might be a good fit, and as soon as they pitched me the premise, the ideas started flowing out like crazy. 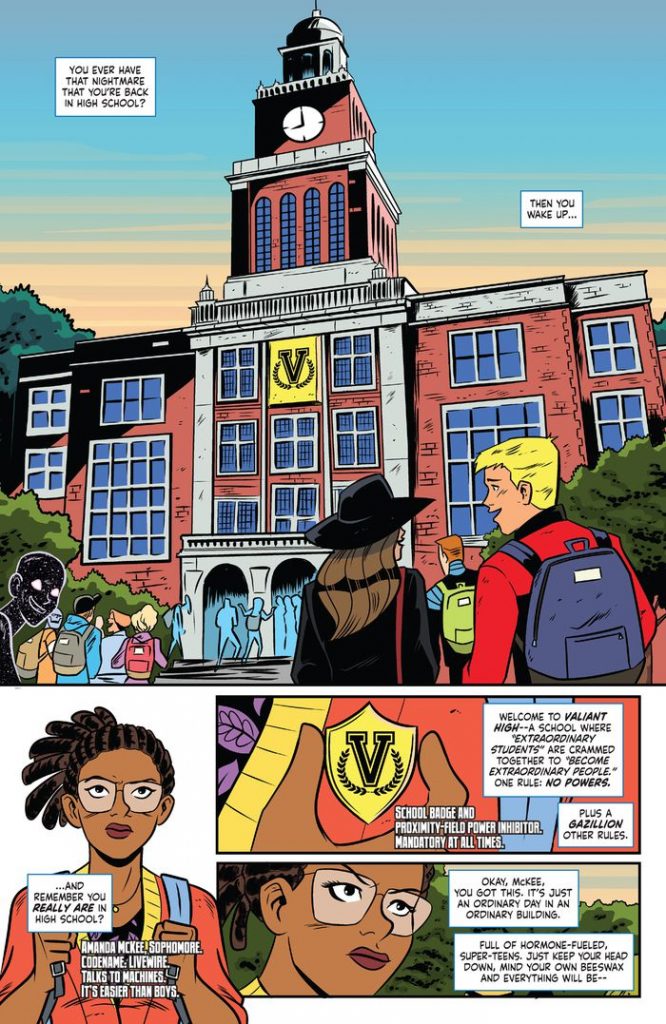 FS: The book features young heroes attending a superhero preparatory school. Were there any films or books in pop culture that influenced how you tackled the story?

DK: Absolutely. Throughout the series, there are moments that people might recognize as a She’s All That moment, or a Breakfast Club moment, while at the same time trying to subvert those tropes so we can give people something unexpected. One of my biggest influences had nothing to do with teens or high school at all: Marvel’s 1602. It was the first Alternate Universe story I really got into where they boiled the characters down to their core so they could see how they’d click into a new setting.

FS: While I think there are certainly similarities in our collective high school experiences, they are also unique just by virtue of the fact that we’re individuals with different backgrounds and sensibilities. Did you draw on any of your high school years while writing the series?

DK: Oh yeah, high school was the worst. I dredged up a lot of those feelings of helplessness and frustration to write the primary POV character, Amanda McKee (Valiant’s Livewire). It helped me articulate how trapped teenagers feel. So close to control over your own life, and yet so far — like the person you’re about to become is waiting for you, just out of reach. High school is a time of yearning, and there’s nothing more helpful for writing characters (especially hormone-fueled teens) than for them to desperately want something. Or someone. 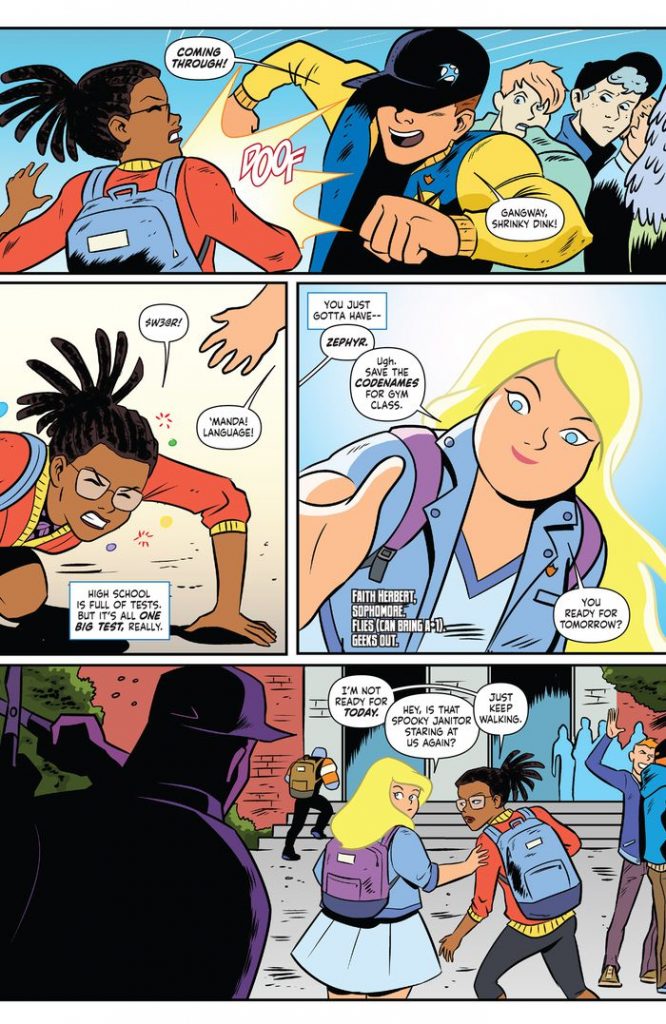 FS: You’re a writer for The Late Show with Stephen Colbert. While I know TV and comics are two different animals, how does your work at The Late Show inform how you approach Valiant High?

DK: It means I do it at night. And on the weekends. And in the shower. Jokey answers aside, the obvious main difference is that I’m writing a character-driven narrative. But late night comedy is great practice for storytelling — taking a complex idea and turning it into an emotional journey, plus jokes. It’s given me a lot of practice taking a feeling, or an observation, and boiling it down into one line, which is great for writing monologue jokes, and equally great for the constraints of word balloons.

FS: What can you tell us about Amanda McKee, our main POV character in the first issue?

DK: Amanda McKee’s story is simple: She’s almost 16 and she wants a car.

Okay, maybe it’s not THAT simple. What she actually wants is to escape. As a technopath, she can also TALK to cars, and all other machines, hence her gym class codename: Livewire. But at a high school where everyone has powers, it takes more than that to stand out. Amanda is one of those young people who hasn’t found their “thing,” yet — the passion or talent that will reveal her place in the world.

So she keeps her head down and daydreams about getting away, not realizing that strangeness is afoot at Valiant High, and she’ll have to choose between the escape she’s always wanted, or uniting with something bigger than herself. 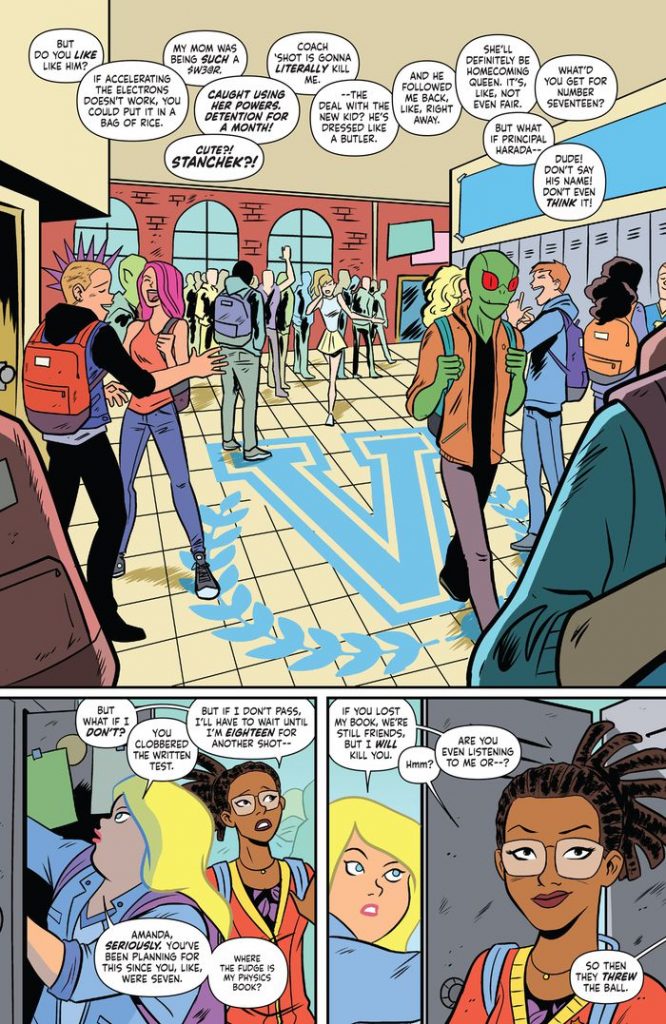 FS: Following up on that, what was the process of deciding how characters like Archer and Armstrong and Ninjak would act and interact with other stars of the series? Was it a matter of reverse engineering, looking at the characters’ personality traits as adults and going from there?

DK: Basically. Because the personalities are so strong, the process of mapping the archetypes onto common high school cliches happened really quickly and organically. There’s almost a puzzle-solving aspect to it: X-O Manowar battles in armor, so he becomes a football star. Bloodshot is a terrifying military man, so he’s the drill instructor-esque gym coach. Faith is already a bubbly young optimist, so don’t fix what’s not broken. There become endless opportunities to do puns and easter eggs for Valiant fans, like having Gilad held back so many times they call him, “The Eternal Sophomore.” I apologize for nothing.

FS: Series artist Derek Charm has an ebullient, dynamic style that fits the story perfectly. What was the collaborative process like with Derek?

DK: Like a mind-reader who makes everything way, way better than I was picturing. Derek was working on the character designs while I was still in the pitching process, so I got to use his vision of the cast as inspiration for who they’d be in the story — which was huge, especially in the case of Ninjak, and ended up inspiring his entire backstory. Most importantly, he carries the emotional weight of young characters in a way that awes me across his entire body of work, from Starfleet Academy to Jughead. Teens be having feelings. 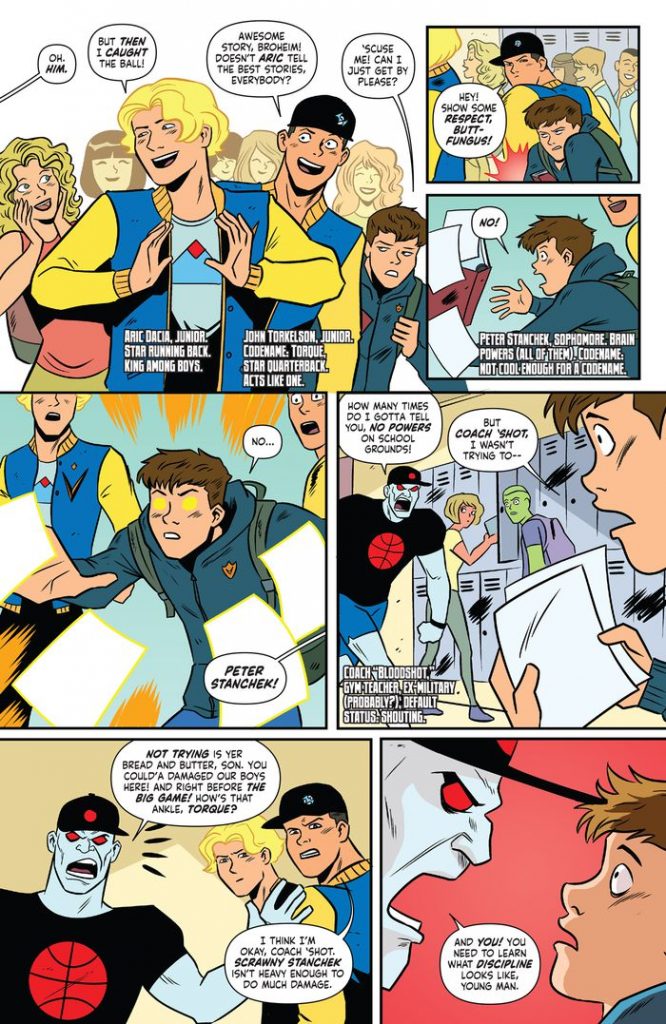 FS: Is there a character you have a particular affinity for writing?

DK: I love dipping into the supporting cast. It was incredibly fun to write Armstrong as every philosophy-spouting friend I had in high school whose surplus army jacket always smelled like “incense.” And I love Eric “Quantum” Henderson. Unearned high status is so funny to me, and he acts like such a hall monitor in the prime Valiant U, that I had no choice but to make it literal. But my absolute favorite was Dr. Mirage, as a sardonic, put-upon teacher. I wanted way more quips from her, but there wasn’t time. Maybe someday.

FS: What can you tease about what readers should expect going forward in the series?

DK: Well, I just mentioned Quantum, but Woody’s not in the first issue. Or is he? Let’s just say Valiant High might be more than it appears. Not everyone you see is who they claim to be. And the stakes might be a little higher than just trying to find a date to homecoming. But most importantly: THERE WILL BE KISSING.

FS: Besides Valiant High, do you have any other projects coming down the pike you’d like to share?

DK: A few things! Some comics projects in the pipeline, and a possible humor book, but it’s early to give anything away. I would say watch The Late Show with Stephen Colbert at 11:35 ET on CBS after your local news, but obviously everyone should be doing that already. Other than that, my biggest project remains wasting jokes on Twitter, @Kibblesmith. Oh, and a wedding this year. That should be fun.

Valiant High, written by Daniel Kibblesmith with Derek Charm on art, is on sale on comiXology this Wednesday from Valiant Comics.

A unique entry-point that’s perfect for new fans and longtime readers alike, Valiant High presents a hilarious reimagining of Valiant’s award-winning superhero universe – one where the next world-ending cataclysm will have to wait until after prom night! Before they became legends, the world’s most formidable heroes were roaming the halls at Valiant High – a super-powered preparatory academy where Aric “X-O Manowar” Dacia is a record-setting running back, Colin “Ninjak” King is a debonair foreign exchange student, and Coach Bloodshot is way, way too into dodgeball. Now, Amanda “Livewire” McKee and her best friend, Faith “Zephyr” Herbert, are taking it all in for the first time at the one high school where power trumps popularity!

Taking place outside of Valiant’s standard continuity, Valiant High is packed with never-before-seen incarnations of the greatest icons from the largest independent superhero universe in comics – including Archer & Armstrong, the Death-Defying Dr. Mirage, the Eternal Warrior, Toyo Harada, Kris Hathaway, Peter Stanchek, Quantum and Woody, and many more. You’ve never seen the heroes of the Valiant Universe quite like this before!

Part of the comiXology Originals line of exclusive digital content only available on comiXology and Kindle. This title will be available as part of comiXology Unlimited at launch.