Danny Pudi has been playing movie aficionado and sometimes-brutally honest aspiring filmmaker Abed Nadir for five seasons on Community. As the sixth season of the beloved series rolls on over at Yahoo! Screen, Mr. Pudi spoke to FreakSugar at a press junket about the emotional growth of both Abed and his friends as well as what he would like to see in a potential Community film. 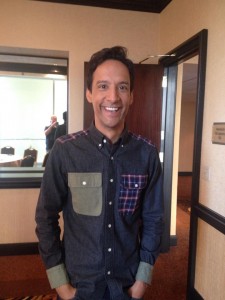 Danny Pudi: This day is actually helpful for us because we’re in the middle of production right now. Our brains are a little fried. Gillian [Jacobs, who plays Britta Perry] and I were shooting until 2’o’clock in the morning, so it’s hard sometimes to look back and remember what we’ve done. We’re so in the middle of it that we can’t remember any of it. So these [junket press] days are good because you’re forced to recollect what you’ve done. And they give us a little cheat-sheet and I look at it and think, “Oh yeah!” It’s shocking how little I remember. So it’s funny to go back and say, “Oh, we did do that. We’ve done 10 episodes already? Holy shit!” [laughs]

FS: With all of the foibles that befall Greendale Community College, will the campus ever be secure?

DP: I think it’s been shown that Greendale will never be safe, ever. In this season, we’re saving Greendale again. There are a lot of hazards coming Greendale’s way, so that’s a lot of this year. The great thing about Greendale is that it’s this place where so much can go wrong, but it continues to hold on. [laughs] There’s this group of people who want to make it pretty as best they can.

FS: In season five and four, we saw Abed go through many changes: Troy left, he got a girlfriend, he was really invested in Greendale’s future. Will we see any more of an emotional growth in Abed’s personal story arc?

DP: I think last year he went through a lot, and it was a lot to handle. We were dealing with the whole Troy and Abed dynamic and saying goodbye to that. And I think it was so nice that [showrunner] Dan [Harmon] and the writers did justice to that in terms of “Let’s really deal with this and come to terms with it with [the episode with] hot lava.

This year’s a little different. Shirley’s gone. Paget Brewster and Keith David have joined the cast as two new members of the study group. Abed’s dealt with one major loss, so it’s not like this is new to him. He’s already dealt with that in some ways. He’s been forced to deal with loss and growth. He’s had a girlfriend. So this year is more about Abed and the group moving toward something. What are we moving toward? That’s a big thing we address. If you’ll notice in a lot of the scenes this year, the group is together a lot. And a lot of it is, “Who is Paget in relationship to the group? Who is Keith in relationship to the group? How are they affecting us?” It’s nice to see these new interactions and new dynamics and ideas of who is the alpha male. Who is the true leader of the group? There’s a lot of jockeying for that position.

So in terms of emotions, I wouldn’t say it’s emotional. It’s more about practical growth. What are we doing as a group? What are we doing with Greendale? Are we trying to save it? And then also, what are we doing with our futures? We see a little bit of that. Abed does make another film this year, so there’s a step for Abed getting to that next level of graduation or whatever that may mean in becoming a filmmaker or being accepted as a filmmaker.

FS: Do we get to see anymore instances of an Annie/Abed flirtation?

DP: With Annie and Abed, it’s always been sort of like these goofy friends who work together because they’re both high-strung in different ways. I think what’s fun is when Annie gets caught up when Abed wraps himself in some character. There’s something really fun in that, you know? Once Abed is snaps out of that character, it’s very clear that they’re not going to work together. [laughs]

We do, though, have to explore our living dynamics because Britta moves in with us. So you do see a little bit of what that is like. What’s life like at home again? Because sometimes you forget what life is like at home. “Oh yeah, Abed is at home with Annie every night. What’s that like?” So you get to see more of their home life with Britta moving in.

FS: Speaking of Britta, what’s her story arc like in relation to the group?

DP: I think Britta’s arc is incredible. I love her stories this year. And I think a lot of that has to do with her moving in with Annie and Abed. We get to meet her parents this year. So much of that informs our characters’ perspectives on Britta and acceptance of her in many ways. The characters are all deeply flawed. [laughs] Sometimes, we don’t always necessarily know why. But you definitely learn why in some ways with Britta this year.

FS: That might be why the study group members are the perfect people to take care of Greendale. They’re all flawed and they see the flaws in the school.

FS: You mentioned that Abed has already dealt with loss with Troy leaving and now Shirley leaving. How is he dealing with the additions to Greendale in Keith David and Paget Brewster’s characters?

DP: I think there’s some skepticism at first in true Abed fashion. It’s a little bit more of, “What’s the dynamic of the study group now?” What’s that like with introducing two new elements? We’ve had one before; we’ve never had two. So there’s a little bit of that, of figuring that out. But I think it’s quickly addressed right away with interactions. That’s because Abed can be very direct. So there’s this acknowledgement of, “What are we doing here? Who is this person? What do they mean? I don’t understand your point of view” kind of thing. So there’s some skepticism.

But there’s this other thing, and it’s why I love Greendale and the universe so much: It’s filled with deeply flawed people. So if you’re willing to join the study group, we should really consider you as a candidate because you’re probably flawed, too. [laughs] I think Paget and Keith’s characters are wonderful, but they’re both wonderful people and amazing actors. I think the acting ability they both have and the dynamic they bring to the group is awesome. I’m excited for that.

FS: If it happens, what would you like to see in a movie?

DP: We were just talking about this. I think Dan said we would need a Pirates of the Caribbean-type budget. [laughs] Which that really excites me. [laughs] I don’t know. I always love when we do paintball, I love when we burst through the walls of Greendale. I think one of the things we should do is get office campus. That would be amazing. Some locations would be really cool. That would be fun. But in terms of genres, I have no idea. We’ve done so many things that I can’t predict what to expect. I think it would just be fun. And I also think it would be fun if we could just get some of the people back who were here. That would be awesome.

Be sure to check out our reviews of episodes 1, 2, and 3 of the new season, as well as our exclusive interview with Community‘s Jim Rash!