Matt Murdock, the acrobatic vigilante known as Daredevil, has often played fast and loose with his secret identity, to the point that his sometimes carelessness has led to his double-life being compromised several times. However, in the current pages of Daredevil, writer Charles Soule and artist Ron Garney follow a Matt Murdock whose secret ID is intact. 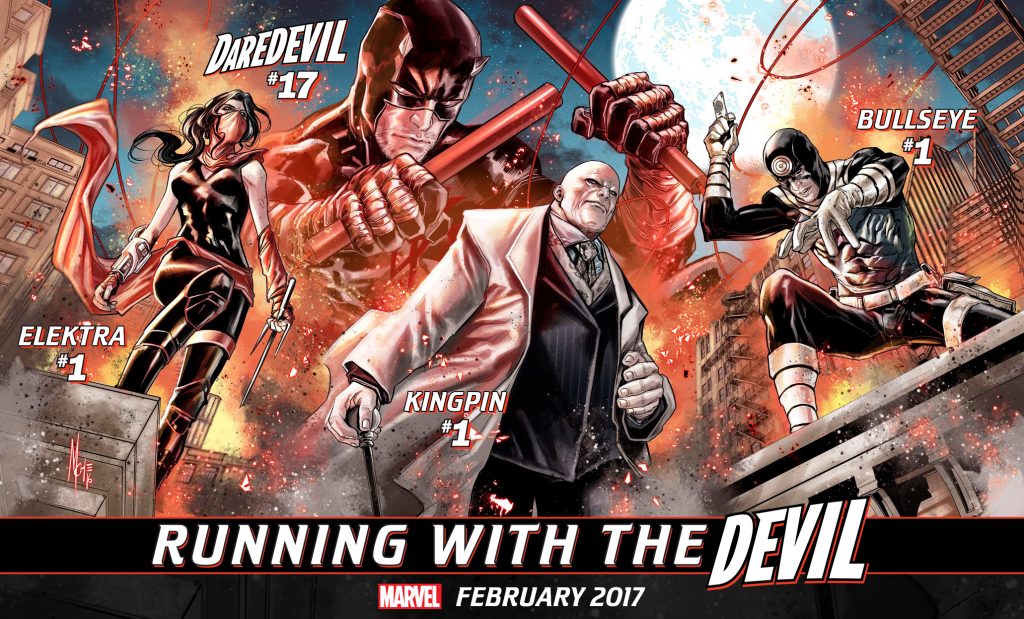 So, how did this happen? This February, Soule and Garney will explore how Daredevil managed this feat in Daredevil #17. But apparently Marvel has more Man without Fear goodness for 2017 with a trio of titles focusing on Daredevil’s fiercest villains–Kingpin, Elektra, and Bullseye–in its “Running with the Devil” event. Will those folks somehow tie into Daredevil pulling off his greatest trick and protecting his identity? As always, “wait and see” is the name of the game.

“Running with the Devil” kicks off in February from Marvel.

It all starts in DAREDEVIL #17, as secrets will be revealed! Blockbuster creators Charles Soule and Ron Garney team to answer the question on everyone’s mind –  just how did Matt Murdock regain his secret identity?! Then prepare to delve into the mind of two vile villains in KINGPIN #1 from Matthew Rosenberg (Rocket Raccoon, Civil War II: Kingpin) & Ben Torres (Daredevil) and BULLSEYE #1 from Ed Brisson (Secret Wars Battleworld) and Guillermo Sanna (Deadpool).  Finally, Sin City is about to get a new player in ELEKTRA #1 – from writer Matt Owens (Marvel’s Luke Cage) and artist Alec Morgan (Secret Wars Journal)! How long can Elektra escape her past when she runs afoul of Arcade and his new Murderworld?!