Yes, you read correctly. Hellboy, agent for the Bureau for Paranormal Research and Defense and demon siding with the angels, has been starring in thrilling, thought-provoking, and poignant stories for over two decades. As if yesterday’s peek at actor David Harbour as Hellboy in the 2019 Lionsgate film wasn’t enough, Dark Horse Comics just announced that the publisher will release Hellboy creator Mike Mignola’s original Hellboy stories in chronological order by when the stories took place (rather than by publication order), beginning next spring. The epic tale of Hellboy, from his first appearance to his swan song in Hellboy in Hell, will appear in four omnibus volumes, with two short story volumes included in the release schedule.

Mignola is just as thrilled as fans of the hero with the Right Hand of Doom. “I’m very excited to finally have all the Hellboy stories collected in chronological order,” said Mignola. “And I’m especially excited to have the three Duncan Fegredo books—all the stuff with Alice and the Queen of Blood—together in one collection for the first time.”

And if that wasn’t enough, Mignola and Dave Stewart will be providing brand-spankin’ new covers for each of the six collections, three of which you can see below. 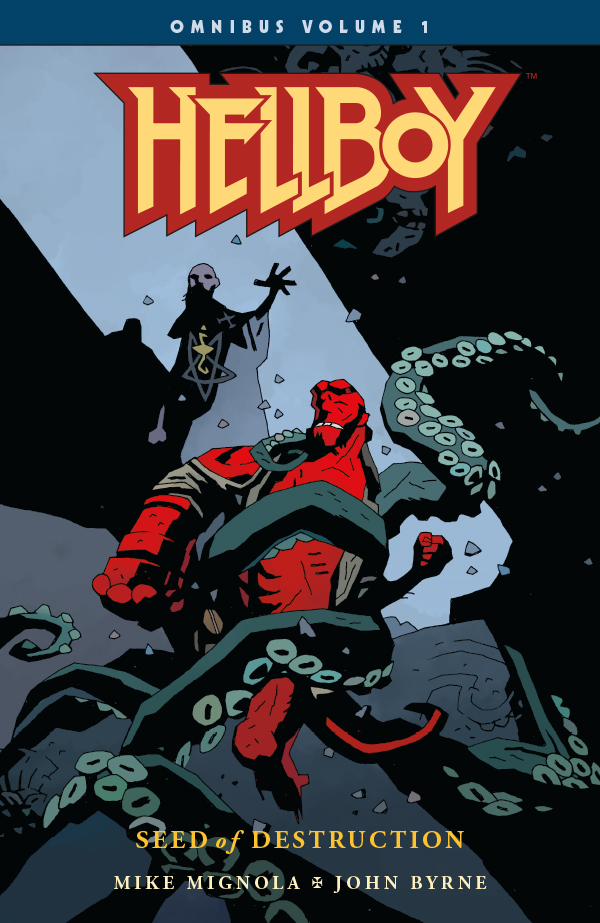 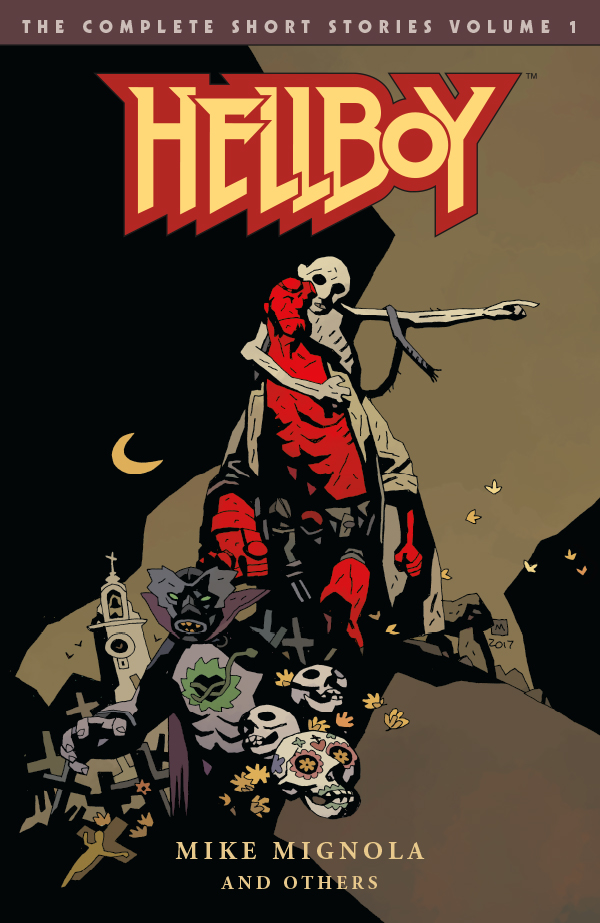 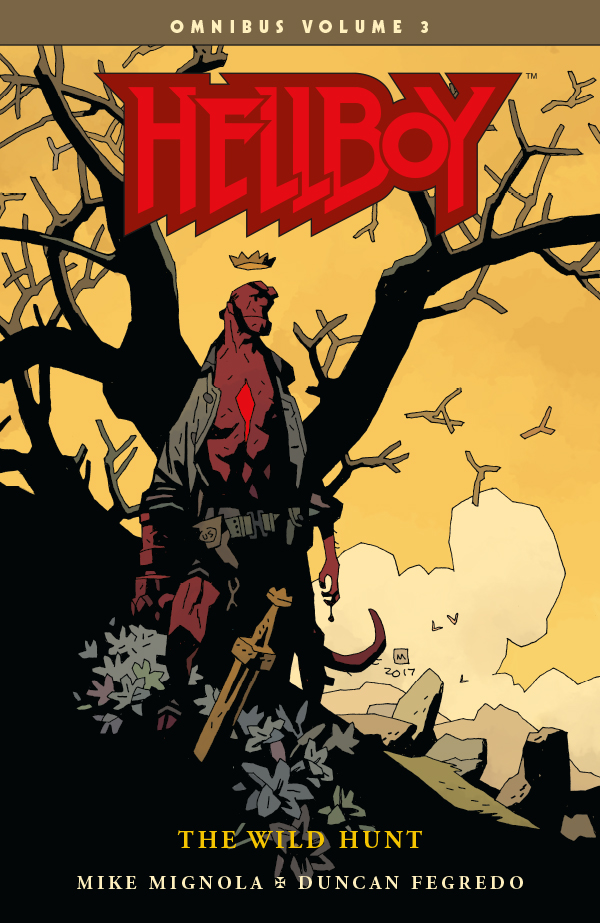 In 1994, Mike Mignola released the first Hellboy series, Seed of Destruction and introduced the world to the Right Hand of Doom, the Bureau for Paranormal Research and Defense, and one of the most iconic comic book characters—and universes—of all time. For more than 20 years, Mignola and a host of celebrated writers and artists have chronicled the adventures of Hellboy facing his supposed destiny as Beast of the Apocalypse, and explored the mysterious backstories of B.P.R.D. agents including Professor Trevor Bruttenholm and Abe Sapien. Now, for the first time ever, Dark Horse Books will publish Mike Mignola’s award-winning Hellboy stories in chronological order with the HELLBOY OMNIBUS COLLECTION, creating the definitive reading experience for Hellboy fans and an ideal entry point for new readers.

This major publishing initiative consists of four HELLBOY OMNIBUS volumes, featuring every Hellboy story written and illustrated by Mignola and The Wild Hunt storyline written by Mignola and illustrated by Duncan Fegredo, which is the basis for the forthcoming Hellboy film directed by Neil Marshall. In addition, Dark Horse will publish two volumes of HELLBOY: THE COMPLETE SHORT STORIES featuring stories illustrated by artists including Richard Corben, Gabriel Bá and Fábio Moon. Each of the six trade paperback books will feature new covers by Mignola and Eisner award-winning colorist Dave Stewart.

“I’m very excited to finally have all the Hellboy stories collected in chronological order,” said Mike Mignola. “And I’m especially excited to have the three Duncan Fegredo books—all the stuff with Alice and the Queen of Blood—together in one collection for the first time.”

Each of the six trade paperback volumes will be priced at $ $24.99 US/$33.99 Canada. The first omnibus will be available in comic stores on May 23rd and in bookstores on June 5, 2018. Both HELLBOY OMNIBUS Volume 1 and HELLBOY: THE COMPLETE SHORT STORIES Volume 1 are available for pre-order now.

About the HELLBOY OMNIBUS COLLECTION:

The story jumps from Hellboy’s mysterious World War II origin to his 1994 confrontation with the man who summoned him to earth, and the earliest signs of the plague of frogs. Avoiding his supposed fate as the herald of the end of the world, Hellboy continues with the Bureau for Paranormal Research and Defense, fighting alongside Abe Sapien, Liz Sherman, and drafting Roger Homunculus into his own ill-fated service with the B.P.R.D. This 368-page volume covers Hellboy’s adventures from 1994 to 1997, reprinting Seed of Destruction, Wake the Devil, and “Wolves of St August,” “The Chained Coffin,” and “Almost Colossus,” from The Chained Coffin and The Right Hand of Doom.

The ultimate introduction to this supernatural hero features 16 standalone stories with Mignola’s greatest collaborators—stories that can be read in any order.

In 1994, Mike Mignola released the first Hellboy series, Seed of Destruction, as Hellboy faced his supposed destiny as Beast of the Apocalypse. Before that, he’d spent fifty years fighting monsters as a somewhat carefree member of the Bureau for Paranormal Research and Defense. The Complete Short Stories Volumes 1 & 2 present those early adventures. “The Crooked Man” and “Double Feature of Evil,” both of which earned Mignola and his legendary collaborator Richard Corben Eisner Awards, are collected with the complete “Hellboy in Mexico” saga, featuring collaborations with Corben, Mick McMahon, Gabriel Ba, and Fabio Moon, as well as one of Mignola’s early masterpiece, “The Corpse.” This 368-page volume covers Hellboy’s adventures from 1947 to 1961, reprinting stories from The Chained Coffin, The Right Hand of Doom, The Bride of Hell, The Crooked Man, The Troll Witch, and Hellboy’s childhood adventure, The Midnight Circus, drawn by Duncan Fegredo.

Hellboy loses faith in the Bureau for Paranormal Research and Defense when they strap a bomb to one of his fellow not-quite-human agents. He gets answers about his destiny, like it or not, in over 300 pages of comics mostly drawn by Mignola, featuring award-winning guests Gary Gianni and Richard Corben. This 416-page volume covers Hellboy’s adventures from 1998 to 2005, reprinting Conqueror Worm, Strange Places, Into the Silent Sea, and “The Right Hand of Doom, “Box Full of Evil,” and “Being Human” from The Right Hand of Doom and B.P.R.D. Being Human.

The basis for the upcoming Hellboy feature film! Terrible powers determined to kill Hellboy force him strike a deal with the Russian witch, the Baba Yaga, and to confront the truth about his destiny. The human race hangs in the balance, as well as King Arthur’s sword Excalibur, in a story that wipes England off the map and sets in motion the end of the world … Mike Mignola and Duncan Fegredo’s complete trilogy is collected for the first time in this 512-page volume, reprinting Darkness Calls, The Wild Hunt, and The Storm and the Fury, and the short story “The Mole.”

Featuring “The Hydra and the Lion,” “The Troll Witch,” “The Baba Yaga,” “The Sleeping and the Dead,” “Heads,” “Goodbye Mister Tod,” “The Vârcolac,” “The Vampire of Prague,” “The Bride of Hell,” “The Whittier Legacy,” “Buster Oakley Gets His Wish,” “They That Go Down to the Sea in Ships,” “A Christmas Underground”, “Dr. Carp’s Experiment,” “The Ghoul,” “In the Chapel of Moloch,” and “Makoma.”

Hellboy in Hell, The Exorcist of Vorsk, The Magician and the Snake

Mike Mignola’s fascination with ghosts and monsters began at an early age; reading Dracula at age twelve introduced him to Victorian literature and folklore, from which he has never recovered. Starting in 1982 as a bad inker for Marvel Comics, he evolved into a not-so-bad artist. By the late 1980s, he’d begun to develop his unique graphic style, with mainstream projects like Cosmic Odyssey and Batman: Gotham by Gaslight. In 1994, he published the first of many Hellboy series through Dark Horse, leading to many spinoffs, prose books, animated films, and two live-action films. Along the way he worked on Francis Ford Coppola’s film Bram Stoker’s Dracula (1992), Disney’s Atlantis: The Lost Empire (2001), and with director Guillermo del Toro on Blade II (2002), Hellboy (2004), and Hellboy II: The Golden Army (2008). A new Hellboy film by Neil Marshall is currently in the works. Mike’s books have earned numerous awards and are published in a great many countries. He lives in Southern California with his wife, daughter, and cat.

Dave Stewart was born on the high desert, while his mother danced to the chatter of a rattlesnakes tail. Despite a rare case of Sasquatch leg and the desire to run with any north bound moose migration, he found the coloring arts were a suitable profession to fuel the resources needed to build a moonshine still in the backwoods hills of Southwest Portland. Much to his surprise he found that his coloring garnered him industry awards, unlike his feverish gathering of dry leaves for winter bedding. And he colors on.

For more than thirty years, Dark Horse Comics has proven to be a solid example of how integrity and innovation can help broaden a unique storytelling medium and establish a small, homegrown company as an industry giant. Founded in 1986 by Mike Richardson, the company is known for the progressive and creator-friendly atmosphere it provides for writers and artists. In addition to publishing comics from top talent, such as Eric Powell, Mike Mignola, Geof Darrow, Brian Wood, Gail Simone, Stan Sakai, and Guillermo del Toro, and comics legends, such as Will Eisner, Milo Manara, Kazuo Koike, Neil Gaiman, and Frank Miller, Dark Horse has developed its own successful properties, such as The Mask, Ghost, X, and Barb Wire. Its successful line of comics, manga, and products based on popular properties includes Dragon Age, Buffy the Vampire Slayer, Aliens, Conan, Tomb Raider, Halo, The Witcher, Serenity, Game of Thrones, and Avatar: The Last Airbender. Today, Dark Horse Comics is the largest independent comic book publisher in the US and is recognized as one of the world’s leading entertainment publishers.