The Orville, Fox’s TV series following a crew of adventurers on a ship of the same name in the far-flung future, was recently renewed for a third season. The show follows the ship as it navigates many of the same issues that we grapple with on 21st century Earth, with some pathos and humor sprinkled in for good measure.

If you can’t wait for the new season to roll out, Dark Horse Comics has a new comic book miniseries debuting this summer brimming with all new stories featuring Captain Mercer, Commander Kelly, and the rest of the ship’s team. Written by David Goodman—who also works on the TV series—and drawn by David Cabeza, The Orville comic looks both to enrich what readers already know about the show while giving readers brand-new stories to pore over.

We spoke with Mr. Goodman and Mr. Cabeza recently about where we find the crew of The Orville in the miniseries, how the comic ties into the TV series, the look of the book, and what we can expect to see in the story moving forward. 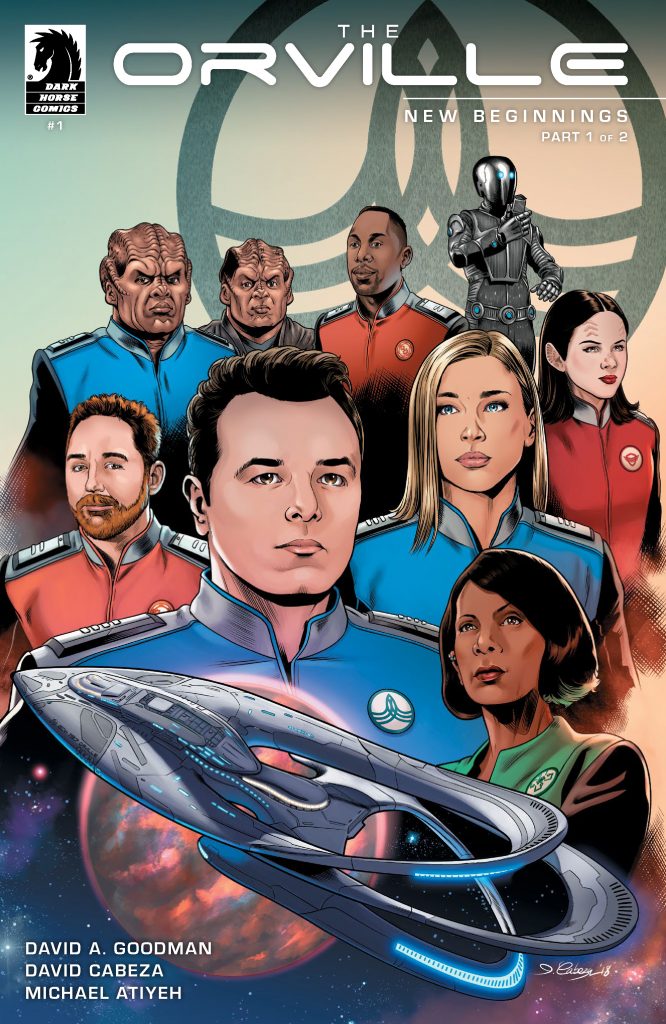 FreakSugar: For folks who haven’t seen the series and are curious about the book, what is the conceit of The Orville?

David Goodman: The Orville is a spaceship 500 years from now, it’s an exploratory vessel led by Captain Ed Mercer.  His first officer is Commander Kelly Grayson, and she is also his ex-wife.  The show (and the comic) follow the ship’s adventures exploring the galaxy while also dealing with the issues that make us human.

David Cabeza: The easy answer would be that it is like Star Trek, but with touches of humor. But it is much more than that because most of the stories told, if not all, address problems that society deals with today, seen by people of the 24th century. It seems to me to be a very interesting point of view with potential to tell many more stories. 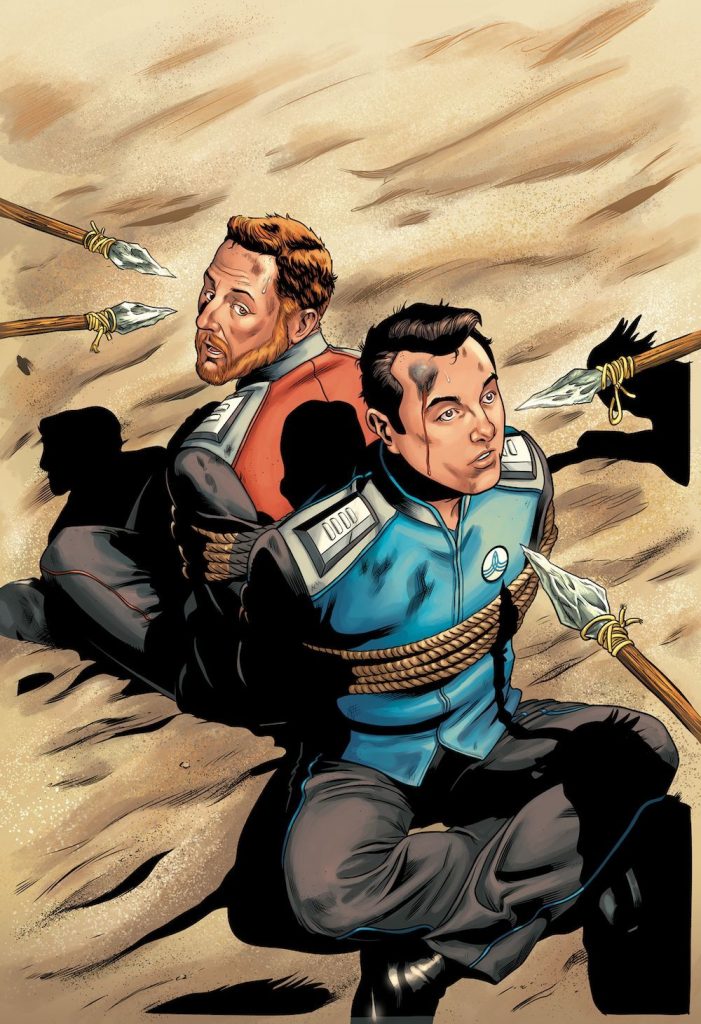 FS: How does your comic tie in with the overall arc of The Orville TV series?

DG: The stories for the first four issues take place between season 1 and season 2.  The show isn’t serialized, but the comics do fill in a couple of blanks that fans might like.

DC: The crew is where we left it at the end of the last episode of the first season, with the two main characters, Ed and Kelly, distanced when it seemed they were coming closer.

FS: Where do we find the crew of The Orville at the beginning of the comic series?

DG: It’s a few weeks after the end of the first season, on a routine examination of a magnetar. The situation between Ed and Kelly is still pretty raw for Ed, and that plays a part in the comic’s storyline, which involves discovering a new race and a century-old mystery.

FS: Do you have any communication with the folks at Fox about the course of the stories you’re telling?

DC: My communication with Fox is limited to requesting photographic references from time to time through my editor at Dark Horse, although I have contact by email with David G. to review what I do and if I need to resolve any questions. 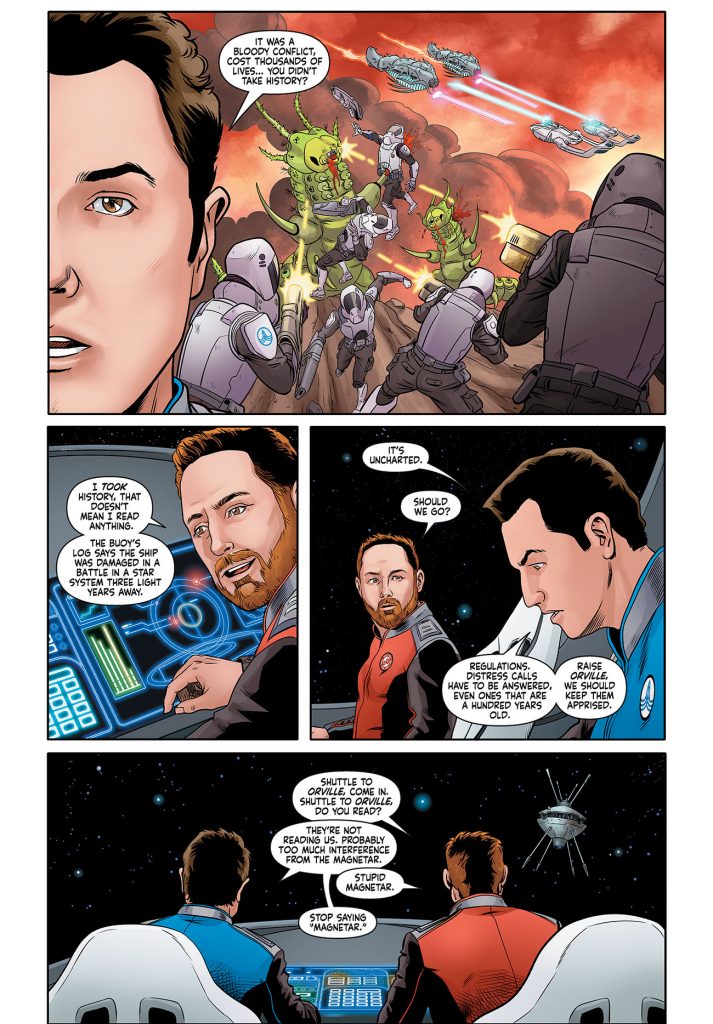 FS: The look of the series is incredibly easy on the eyes, with characters mirroring their real-world inspirations while still being their own creations. What was the discussion about what you wanted the visuals of the series to be?

DG: David Cabeza immediately captured the look of the show, but also made it a vibrant comic in its own right. I email him some suggestions, but his talent and instincts do most of the work.

DC: There really was not a previous conversation for the development, when they requested the test pages they clearly specified what they were looking for, a clean style and characters as similar as possible to the actors. So, once they chose me they made a couple of observations about the drawing’s finishes and that’s it.

FS: For you, what is the appeal to delving into the world of The Orville?

DG: I love working on this show as a writer, and using the comic to tell stories that we don’t get a chance to tell on the show.

DC: Being part of this is amazing! It’s my first comic for the USA and to start in this way is a dream. It also means a great responsibility for the large number of fans of the series. I’m working hard to get the best out of it! And as I said before, this creation has the potential to tell many stories, be it on TV, in comics or in any other medium. The stories that will appear in this miniseries follow the same line as those of the television series, so I believe that the fans and those who enter the world of The Orville through our work will be satisfied.

FS: Is there anything you’d like to tease about what we can expect to see in the series moving forward?

DG: There will be surprises for fans of the show, I just hope they’re surprises the fans like!

DC: I do not know what will happen in the future of The Orville, but the characters are very interesting, and they still have a lot to tell. I hope their adventures continue to entertain and surprise us.