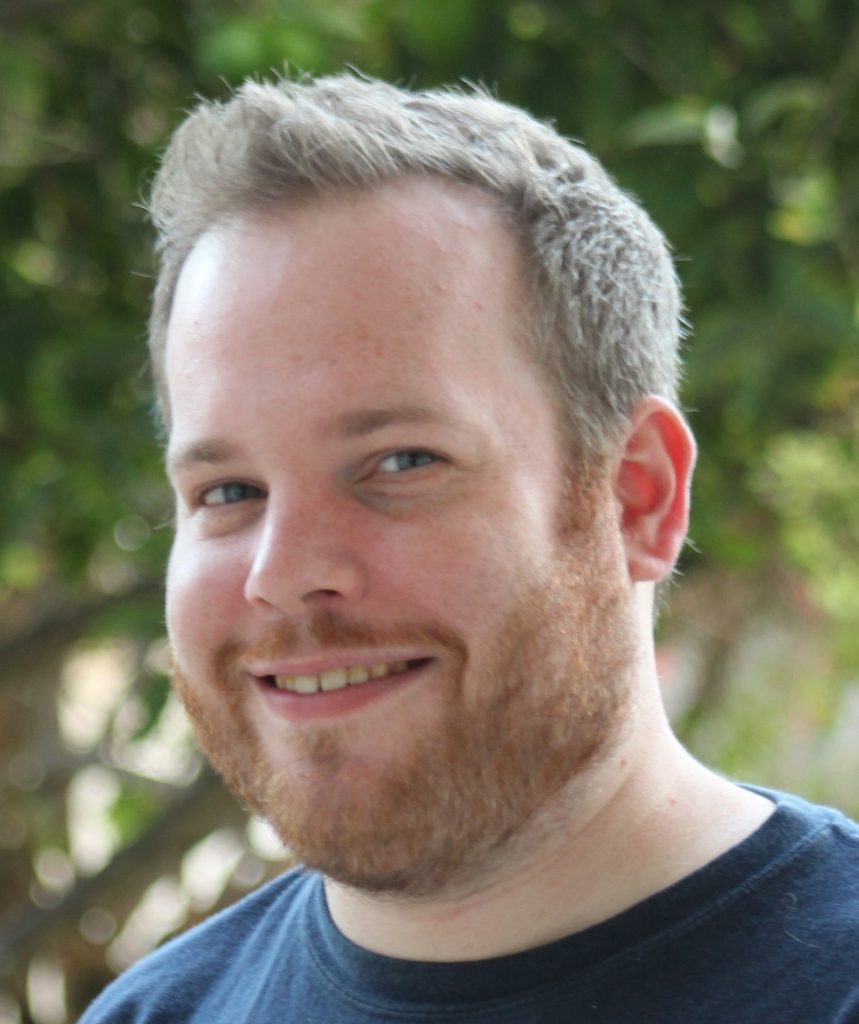 Author L. Frank Baum’s novel The Wonderful Wizard of Oz has captivated readers for decades, stirring the imagination and, sometimes, the creative energies of writers and artists. Comic creator David Pepose is one such writer, who has drawn inspiration from Baum’s work to put his own gripping, thought-provoking spin on the Emerald City in his new comic book The O.Z., which hit Kickstarter two weeks ago. The O.Z.—brought to life by Pepose, artist Ruben Rojas, colorist Whitney Cogar, and letterer DC Hopkins—looks at the world Dorothy Gale leaves behind after killing the Wicked Witch and returning to Kansas. What turn would Oz take without a leader—even one as wretched as the Witch? What conflicts would erupt as a result?

I spoke with Mr. Pepose recently about the inspirations behind The O.Z., the world that he and the creative team have built, how he delved approached the trauma of war in this narrative framework, and the Kickstarter campaign.

A brief side note: This is the first time I’ve had the chance to interview Mr. Pepose and his answers were so comprehensive and thoughtful: It’s so nice to see someone’s palpable excited and love of comics and his project pop off the computer screen.

FreakSugar: Before we get into the Kickstarter, what can you tell us about the conceit of The O.Z.?

David Pepose: The O.Z. is like what if The Hurt Locker and Mad Max took place in The Wonderful Wizard of Oz. We’ve recontextualized Dorothy Gale killing the Wicked Witch as something like a botched regime change — and when Dorothy clicked her heels and returned to Kansas, she inadvertently left Oz in the midst of a power vacuum leading them to years of brutal civil war.

Our story picked up a generation later with Dorothy’s granddaughter and namesake, a disillusioned Iraq war veteran. Yet when a tornado strikes her small Kansas town, our new Dorothy finds herself trapped in the war-torn land of Oz. Forced to confront her past and her grandmother’s legacy, Dorothy will have to enlist her grandmother’s former friends if she hopes to survive the Occupied Zone…or, as the locals call it, The O.Z. 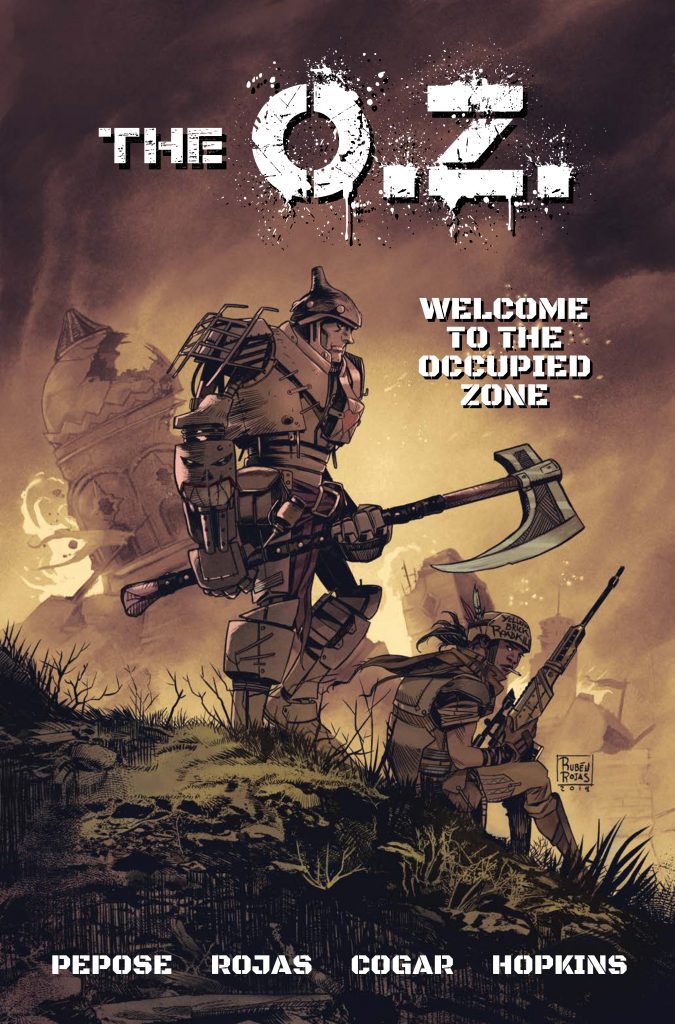 FS: The characters pull from Dorothy and the various Oz tales. What can you tell us about who we’ll meet in The O.Z.?

DP: The main character of The O.Z. is Dorothy, the granddaughter of the original Dorothy from L. Frank Baum’s The Wonderful Wizard of Oz novel. Unlike the wide-eyed Kansas girl of yesteryear, this new Dorothy is an Army veteran who’s returned from her tours of Iraq and Afghanistan with more than her share of trauma and guilt to grapple with.

As we mention in our preview, you can teach a soldier how to wage war, but keeping the peace can be a very different skill set — but at the same time, Dorothy’s military training might be the thing that saves people’s lives, as she’s able to take the wild magic of Oz and repurpose it as weaponry to defend herself and those around her. Yet by virtue of who her grandmother was, Dorothy also has to reckon with this uncomfortable burden of leadership. How do you make moral choices in wartime, when every decision you make can wind up with someone dead?

We also get to meet characters like the Tin Soldier, who has been destroyed and rebuilt so many times that he’s become the unstoppable face of the Resistance. The Scarecrow, meanwhile, has had to grapple with his now-limitless intelligence being unable to extricate Oz from the war it’s found itself enmeshed in — which has had its own corrosive effects on him. The Cowardly Lion, meanwhile, has to relearn the calculus of bravery now that he’s no longer fighting for himself, but leading the entire Animal Kingdom…

Honestly, that might be my favorite part of The O.Z. as a series, is that we don’t just experience war through Dorothy’s eyes, but we get to see how this years-long conflict has affected these other iconic characters, as well. No two of these classic heroes have coped in the same way, but make no mistake, no one has gotten through this war unscathed. 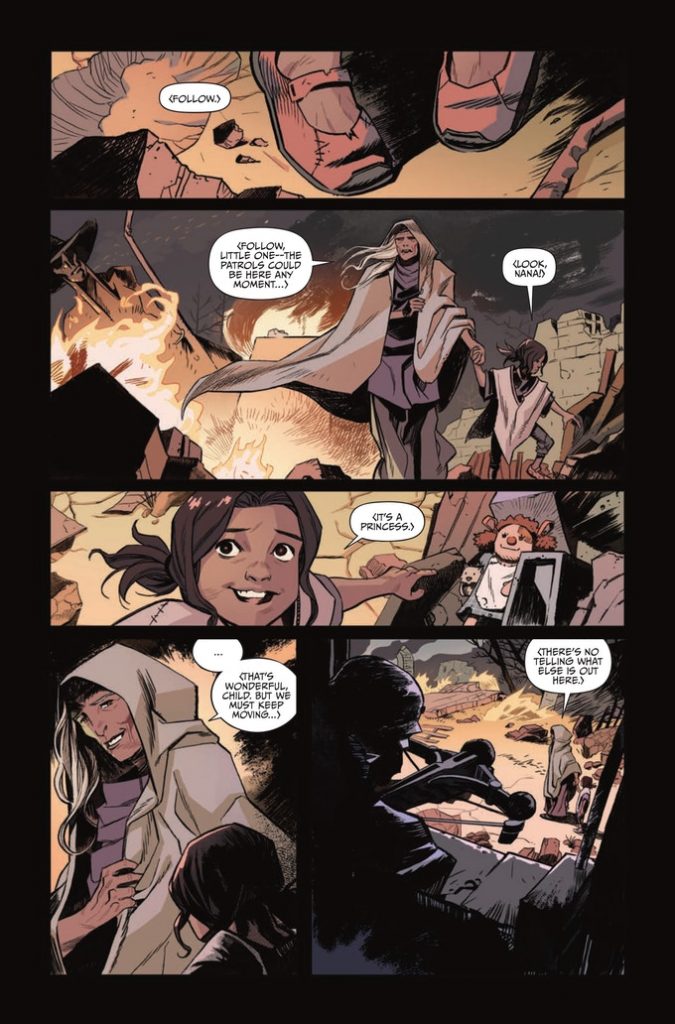 FS: The Oz stories are so rich to pull from and the whole team behind The O.Z. has given such a unique spin on that mythology. What compelled you to create your tale?

DP: After my first book Spencer & Locke was released, I knew I wanted to try different genres, including fantasy — so I had written down different inspirations like Lord of the Rings, Lloyd Alexander, Piers Anthony, Harry Potter… and the Wizard of Oz. When my cursor rested on the word “Oz,” I was struck by how short but iconic it was — and then I realized it could be seen as an acronym, like “DMZ.” Or in this case, the Occupied Zone — when I thought of that idea, the image hit me like a lightning bolt. Dorothy as a disillusioned soldier, the Tin Man as a towering war machine freedom fighter… it was an irresistible concept.

The other thing that got me about The O.Z. was that the original source material offered itself well to the core war concept I was exploring — while the original L. Frank Baum novel or the Judy Garland movie tries to wrap up Dorothy killing the Wicked Witch with a neat little bow, I grew up during the Invasion of Iraq. Killing a tyrant isn’t a clean or quick affair, because of how much they insinuate themselves in their countries not just through fear and power, but through outright control. The parallels to Iraq felt inescapable to me, and seeing the wondrous magic of Oz filtered through the dangerous lens of combat felt like a really organic storytelling angle.

FS: Following up on that, what has been the creative process been like with the O.Z. team?

DP: I’ve been fortunate enough to work with some of the best indie creators in the business, from Jorge Santiago, Jr. and Jasen Smith to Gavin Guidry and Liz Kramer, and I think Ruben Rojas, Whitney Cogar and DC Hopkins only keep that streak alive.

Ruben is one of the most gifted designers I’ve ever worked with — I’ve never seen him turn in a bad design for a character or a setting, he just adds so much detail and so much style to every single page. And he’s versatile, to boot — he can switch from fast-paced action to moody emotion on a dime, while still maintaining that Dan Mora-by-way-of-Sean Murphy style that allows our book to not become oppressive. We’re already talking about what our next project is going to be once we wrap up The O.Z. because Ruben is just the real deal.

Meanwhile, I think Whitney Cogar is absolutely our book’s secret weapon — she and I talked a lot about what the Mad Max version of Star Wars might look like, just keeping that intensity and grittiness but transferring it to this wildly varied world of magic and monsters like Oz. I’ve known for a long time that good art makes or breaks a comic, and the right colorist will make or break your artwork. She takes Ruben’s superlative inks and just raises them to the next level.

And I think DC Hopkins does the same thing with my dialogue. He’s incredibly patient and good-natured, just the ultimate team player when we discuss the relationship between my words on Ruben and Whitney’s artwork. He’s considerate and deliberate with every choice, and I think that makes our storytelling really smooth and able to hit at the maximum impact. Honestly, he’s the glue that brings us all together, and the center of calm when I need it the most. 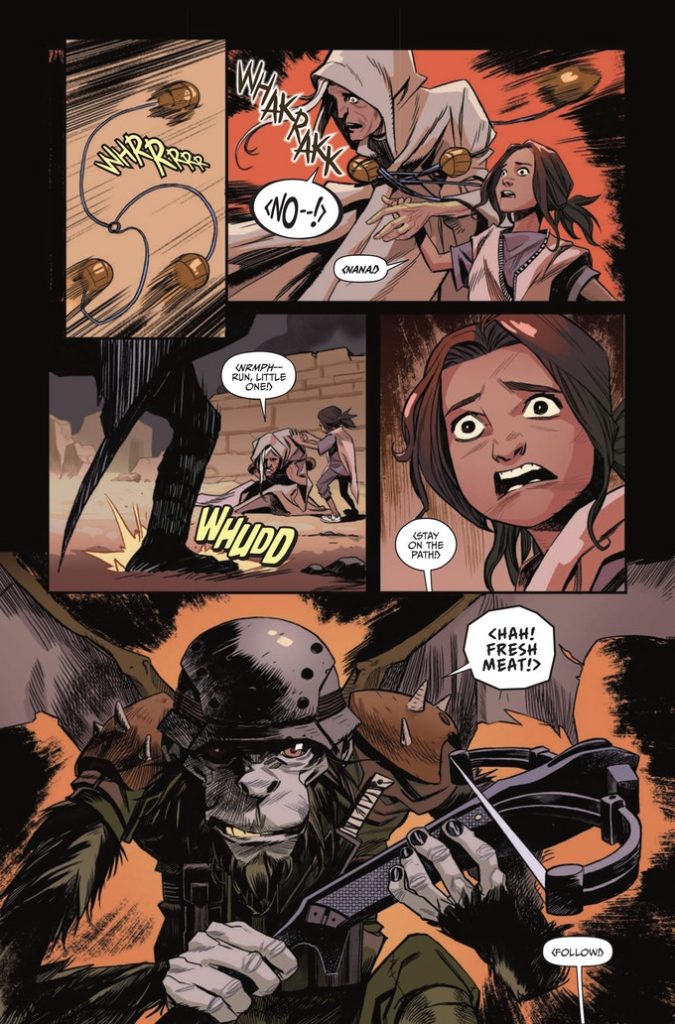 FS: Besides the Oz tales, what influences—either historically or in fiction—do you pull from for your story?

DP: Oh man, great question… Mad Max: Fury Road, just in terms of tone and the tough-as-nails heroine at the center of it all. Star Wars, both the original trilogy and Rogue One, just for the sheer scale and wonder of it all. Chrono Trigger was a huge influence, as well as Final Fantasy 7, in terms of how the team of archetypes was built up. DMZ and Sheriff of Babylon both definitely impacted the story, as well.

There were also some personal elements that went into it — I definitely built on the foundation I had set up in Spencer & Locke, this narrative of exploring and confronting past trauma. But most importantly, I covered the local military and mental health beats back when I was a newspaper reporter in rural Massachusetts, so I spoke with a lot of returning veterans who were dealing with trauma and alienation as they tried to reintegrate back home. Those stories were really powerful, and absolutely affected my work on The O.Z.

FS: On to the Kickstarter itself: You’re fully funded five times over in just over a week! Congratulations! What can you tell us about the campaign?

DP: You hope for success, but you prepare for the worst… but nobody tells you to plan for getting funded in the first two hours. [Laughs] It’s like stepping out for a sandwich and winding up on the moon — you can’t plan for that level of overshooting, you just have to think on the fly to make sure when you hit the ground again, that you hit the ground running.

Kickstarter, in so many ways, is a totally different animal from the Direct Market, a different planet with its own unique laws of physics. I honestly can’t believe how collaborative and interactive the platform is, on a level entirely different than anything I’ve ever experienced on any other book — because there’s no fighting for shelf space and retailer dollars, and because Kickstarter’s business model is contingent on keeping people in their ecosystem, there’s a wonderful positive feedback loop as more and more people discover The O.Z.

But I also consider myself incredibly fortunate to have the best fans in the business — the success of this campaign really was because of all the readers, press, retailers and fellow creators who came together to lift us up and spread the word about our book. It takes a village and more than a little luck for a campaign to turn out like this, and I couldn’t be more grateful. 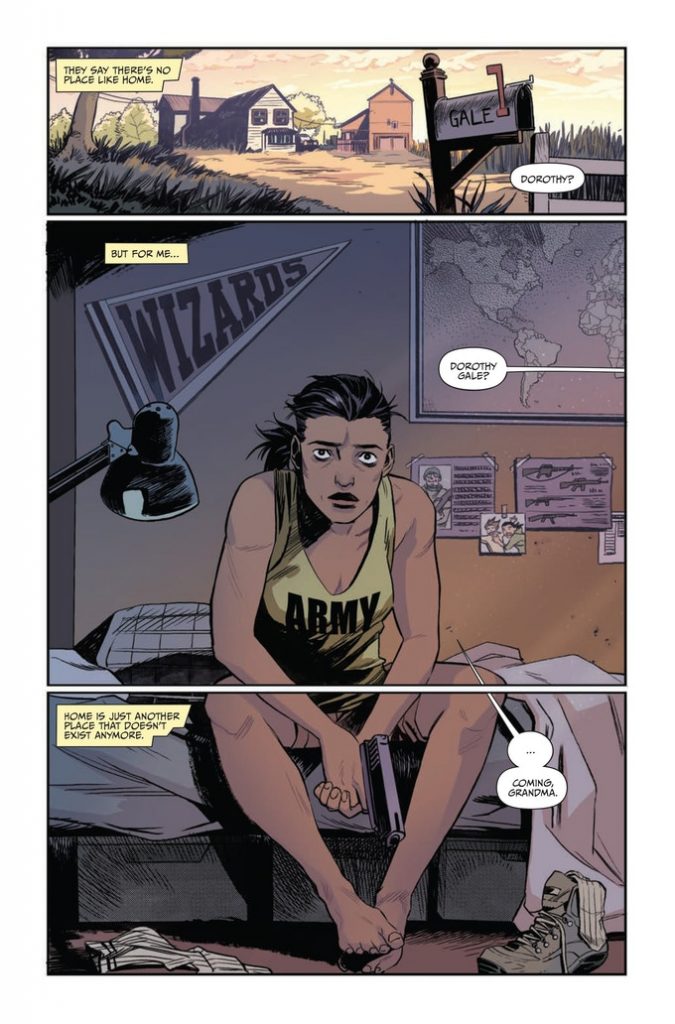 FS: What kind of rewards can backers of The O.Z. expect?

DP: We’ve got reward tiers that can appeal to every possible budget, ranging from digital PDFs of our double-sized first issue to any of our four physical covers, to premium tiers including Skype portfolio reviews from me and original head shot commissions from artist Ruben Rojas. Almost every level will also include PDFs including my script for the series, as well as Ruben’s raw inks and Whitney Cogar’s untouched colors — plus we’ve now unlocked our Digital Comics Extravaganza as a stretch goal, meaning every backer will receive digital comics from over a dozen indie creators. We’re dedicated to making sure that every reader gets plenty of bang for their buck, and I think our fans will love what we’ve got in store for them.

FS: What would be your pitch to folks who are considering backing The O.Z.?

The O.Z. is one of the best things I’ve ever written, and it’s absolutely one of the most beautiful books I’ve ever had the privilege to work on — and unequivocally a comic that can go toe-to-toe artistically with any other series in the Direct Market. Combine that with the murderer’s row of cover talent, the enormous amount of rewards, and the universal accessibility of this title, you shouldn’t miss out on this Kickstarter.

You might think you know the story of Oz, but this is the story of what comes next — so join the Emerald Army, and order The O.Z. today.

You still have time to contribute to the Kickstarter for The O.Z.! Click on the campaign link here to find out how to get in on the rewards Mr. Pepose mentioned!