Artist David Rubin has made a name for himself on such aesthetically-surreal and tightly composed books as Dark Horse Comics’ Ether and Boom! Studios’ The Fiction. This fall, Rubin will apply that sensibility to his and writer Jeff Lemire’s Dark Horse miniseries Sherlock Frankenstein & the Legion of Evil. Sherlock Frankenstein spins out of Lemire’s Dark Horse series Black Hammer, focusing on Lucy Weber, the Black Hammer’s daughter, as she investigates what happened to Spiral City’s heroes after they defeated Anti-God. All signs point to the city’s villains, which leads Lucy down a long and winding road of startling revelations.

Mr. Rubin spoke with me recently about the conceit of Sherlock Frankenstein & the Legion of Evil, collaborating with Mr. Lemire, and the fun in designing supervillains. 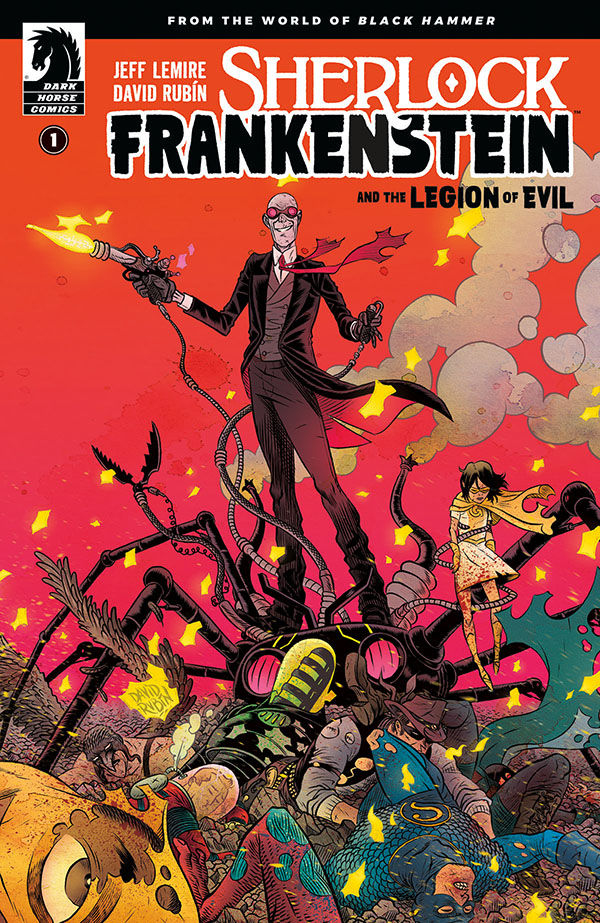 FreakSugar: First of all, congratulations on the upcoming spinoff!

David Rubin: Thank you so much!!

FS: Without giving too much away, what can you tell us about the genesis of Sherlock Frankenstein & the Legion of Evil and your involvement in the book?

DR: My editor at Ether, Daniel Chabon, who is also the editor of Black Hammer, asked me if I would like to do a couple of fill-ins for Black Hammer, and of course I said YES! When I worked on the first of those two issues, Daniel asked me if I wanted to draw four issues more before restarting my work on Ether; that is the genesis of that first spin-off series.

FS: Sherlock Frankenstein is not only exploring the villains of Spiral City, but also Black Hammer’s daughter, Lucy Weber. Where do we find the cast at the beginning of issue #1?

DR: The story begins on the “Hall of Hammer,” the secret sancta sanctorum of Black Hammer, with Lucy Weber searching in the archives of her supercomputer for information about the past of her father, and finds information on the villains, especially in the mysterious past of Sherlock Frankenstein.

Lucy is the true protagonist of this miniseries, and the beginning of this has its precedent in the episode 12 of the main series, that I also drew.

FS: As you said, you’ve worked with Jeff in the Black Hammer universe before, most recently with issue #12. What’s the collaboration process like with Jeff? In terms of world-building—or at least building on what’s already established—what’s the back and forth like with Jeff?

DR: Jeff is a great writer, and also a great artist, that makes his scripts very visual without having to make explicit all the information that should appear on the page. He also gives you a lot of creative freedom when it comes to proposing changes or new ways to tell the history, which I greatly appreciate. The same thing happens with [Ether writer] Matt Kindt. 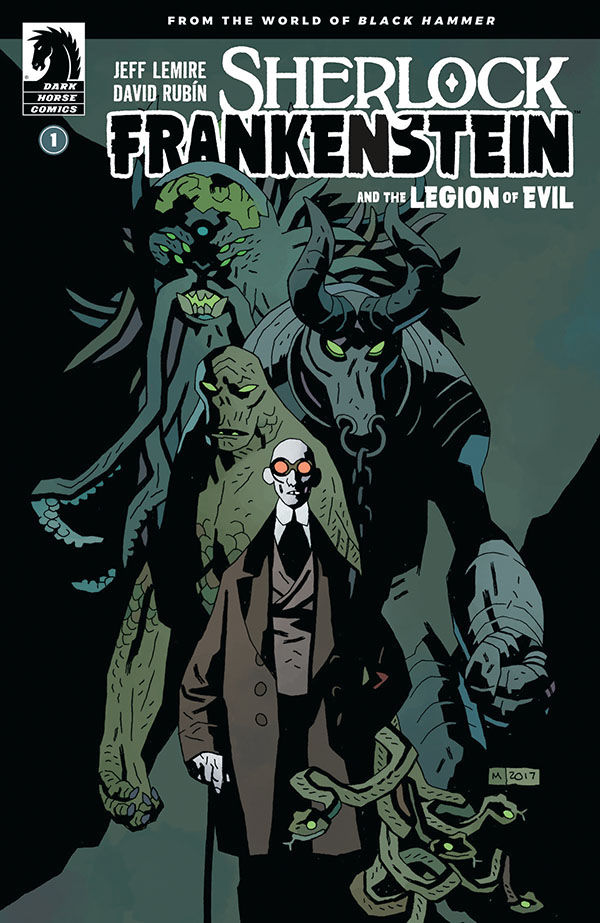 FS: Following up on that, you’ve worked on Dark Horse before, notably on Ether, which I adore. The look you brought to that book has a very Steve Ditko-esque feel, which I mean in the best way possible. While I know every project is different, do you bring that same type of approach to Sherlock Frankenstein?

DR: Well, the style is the same in both because I draw it, but the graphic approach to each is different. They are very different series; Ether is brighter, at least in large part, and Sherlock Frankenstein is darker and dirtier.

Both are series with a very pop style, but follow different paths, Ether is more a story of science fiction and adventure with a lot of humor and touches of intrigue and investigation, and Sherlock Frankenstein is more a story noir, detective, more focused on dialogues and the relations between the characters that in action, although there are also great moments of action in it.

FS: Beyond just Sherlock Frankenstein, there’s a whole Legion of Evil right in the title. What can you tell us about some of the villains we will encounter and how you approached designing the characters?

DR: It is always fun to design supervillains, they are the true stars of this circus. And here I have had the opportunity to design a lot of them! My favorite is Cthu-Lou, who is a different character than we have seen in the main series; it’s a lot of fun to draw with all those crazy tentacles.

FS: Following up on that, with the sensibility that Jeff tackles Black Hammer and the aesthetic he’s built, is there any kind of research into Golden and Silver Age books or other literature that you’ve done in the process of drawing the title?

DR: Yeah, there are many references to Golden Age, Silver Age, Bronze Age and even Modern Age on that series. While working in Sherlock Frankenstein, I documented myself reading wonderful stuff like Arnold Drake’s Doom Patrol, Magnus Robot Fighter, Doc Savage, The Shadow, Justice Society of America… and a lot of old stuff that I really adore.

Then I have mixed it with newest references and modern points of view, but I think all that marvelous classical material, in one way or another, is still there. I hope this reaches the reader. 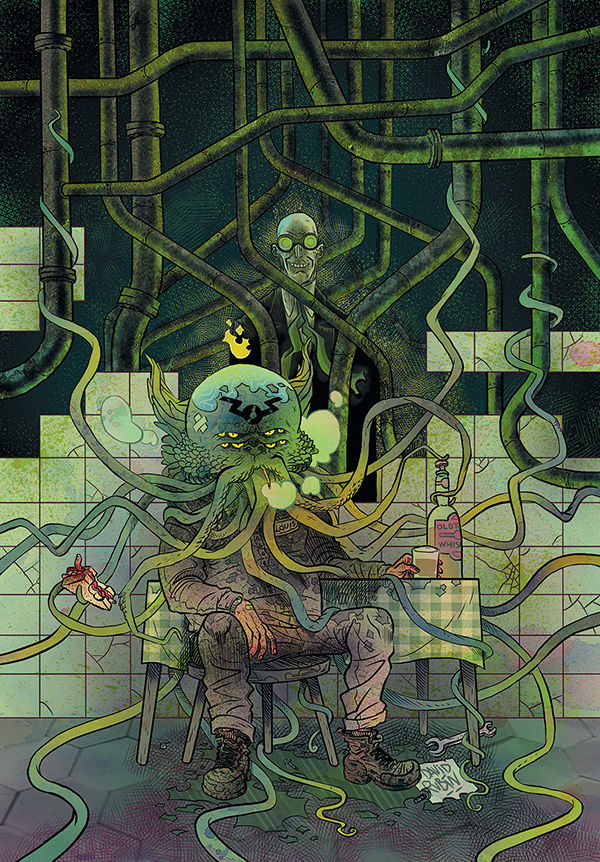 FS: As an artist, what is it about Black Hammer’s world and a book like Sherlock Frankenstein that gets your creative juices flowing?

DR: It is a very rich starting material, allowing you to play with it more freely without losing its main essence. That’s something they have done magnificently well. Jeff and Dean in the main series have created a complex but very versatile world, full of edge and creative possibilities.

Being able to work with so much creative freedom has allowed me to experience a lot in this series, especially at a storytelling level. For example, the last chapter consists entirely of double-spread pages, such as Outland by Jim Steranko, which is something I have been wanting to do for a long time, and this series has allowed me to perform, among other things.

FS: If there’s one thing you would want to tease about the series, what would/could it be?

DR: Be careful what you want, because you can find it. And sometimes the truth is not the answer to everything, sometimes it shows you new paths, new questions, new challenges.

Lucy Weber, daughter of the Black Hammer, grew up to become an investigative reporter for the Global Planet. Now she’s on the hunt for the true story about what happened to Spiral City’s superheroes after they defeated Anti-God and saved the world. All answers seem to lie with the dangerous super villain tenants of Spiral City’s infamous asylum. As she gets closer to the truth she uncovers the dark origin stories of some of her father’s greatest foes, and learns how they tie into the puzzle of what happened to Spiral City’s greatest hero.