When David Bowie passed away in the early days of 2016, fans who had been impacted by his creations–from his music to his acting to his writing–were caught emotionally unawares, reeling from the loss to the artistic community. Writer and artist Kurt Belcher, creator of Caliber Comics’ Winter War, felt that same emotional gut-punch and chose to channel that into a tribute to music magician. Two weeks ago, Belcher launched a Kickstarter campaign for Spiders and Stardust: A Tribute to David Bowie, a comic anthology including work from a bevy of comic creators who wanted to pay respect to The Man Who Fell to Earth in their own way. Each story included in the collection is inspired in some way by song titles in the musicians catalogue, ranging from science fiction to horror to a nod to Bowie as a person.

One of the song titles used in the anthology is from one of Bowie’s most collaborations, his and Queen’s “Under Pressure.” In the collection’s story of the same name, writer Deanna Destito, artist Ted Pogo, letterer Taylor Esposito, and colorist Jasen Smith tell a tale of anxiety and panic attacks and how life appears when suffering through one. I spoke with Ms. Destito recently about the project, why she chose “Under Pressure” as her inspiration for her contribution to the anthology, and why she wanted to be involved in the Kickstarter.

FreakSugar: I adore David Bowie, as so many of us did, so I was thrilled to hear of this Kickstarter’s existence. What can you tell us about the project and how you became involved?

Deanna Destito: After Bowie passed away, Kurt Belcher decided to do a tribute anthology to honor him. Kurt contacted a bunch of people who then contacted a bunch of people, and it grew from there. Writers and artists who are also Bowie fans banded together to create this project. I found out about it from Taylor Esposito (Ghost Glyph Studios, letterer for DC, Image, BOOM!, and more). Basically, each creator took one of Bowie’s songs and crafted a story from there.

FS: What can you tell us about your story with Ted Pogo, Taylor Esposito, and Jasen Smith?

DD: I used “Under Pressure” as my song inspiration. I also have an obsession with Freddie Mercury so this song was perfect for me since it’s a duet between Bowie and him. My story focuses on what it feels like to have an anxiety attack. I suffered from panic attacks for years and I wanted the art to reflect what the world looks like when you are going through it. Ted’s art and Jasen’s colors really brought it to life. Of course, Taylor’s letters complete the story and make it flow nicely.

FS: Bowie left behind a wealth of music and films that still resonate with us to this day. What are some of your favorite pieces of his work and how did they reflect in your story in Spiders and Stardust?

DD: His duet with Mercury has always been a favorite of mine. I also love “The Man Who Sold the World” and “Heroes.” One of my favorite things with Bowie though is Labyrinth. I love that movie and it was such a huge part of my childhood. 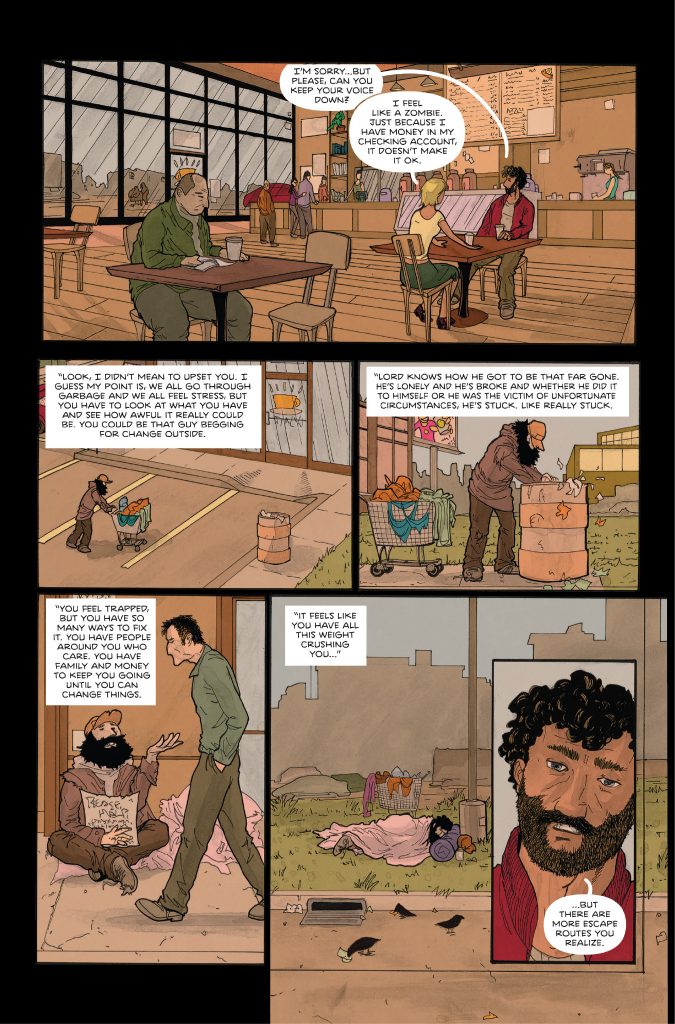 FS: So many people felt an emotional connection with Bowie and his work because of how it impacted to their lives. Was there any kind of catharsis to writing the story?

DD: Whenever I write anything, something personal always seeps in even if I don’t intend for that to happen. When this project came along and I looked at the song list, “Under Pressure” popped out at me because at the time I was going through therapy for getting my anxiety under control. It was odd that it happened at the same time so I figured it was a sign from the universe to write about something very personal through one of my favorite songs.

FS: What would you tell Bowie fans who are considering picking up the Kickstarter about what to expect in the collection?

DD: Expect an incredible variety of writing and art styles. Expect each creator’s passion shining through each page. Since these are interpretations of Bowie’s music, you may even see his songs in a new way because of how someone brought it to life in the book. If you love David Bowie, this anthology should be in your collection.

As of the publication of this interview, the Kickstarter is about $900 away from its $2500 funding goal with 13 days to go. If you’re fan of David Bowie and/or comic book storytelling, give it a look!

Deanna Destito is a freelance writer/editor based in New Jersey. Her articles and short stories have been featured in print and online publications in various industries and genres. She has also served as writer and editor for comic books, magazines, websites, and role-playing game books. A few of her stories can be found in The Dark Reaches Volume 1 and the upcoming Volume 2. She also serves as Editor-in-Chief of Punkhouse Press.