Comic book reporting is an important form of journalism and, with the media landscape as it is, it is vital to support outlets that are doing solid, diverse work, putting in the time and energy to produce quality articles. One such outlet is Full Bleed.

With that in mind, the Kickstarter campaign for IDW Publishing’s third volume of Full Bleed, the print-only hardcover comic book and culture magazine, is under way, already hitting two-thirds of its funding goal as of press time. Edited by Dirk Wood, Full Bleed volume three will feature articles featuring comic book legend Georf Darrow and satirist Shannon Wheeler, an interview with writer Grant Morrison on his feud with writer Alan Moore, and so many more gems in its 200 pages.

Mr. Wood spoke with us recently about Full Bleed as a magazine, the Kickstarter itself and the various foci of the articles of this third volume, and why comic journalism is so important. 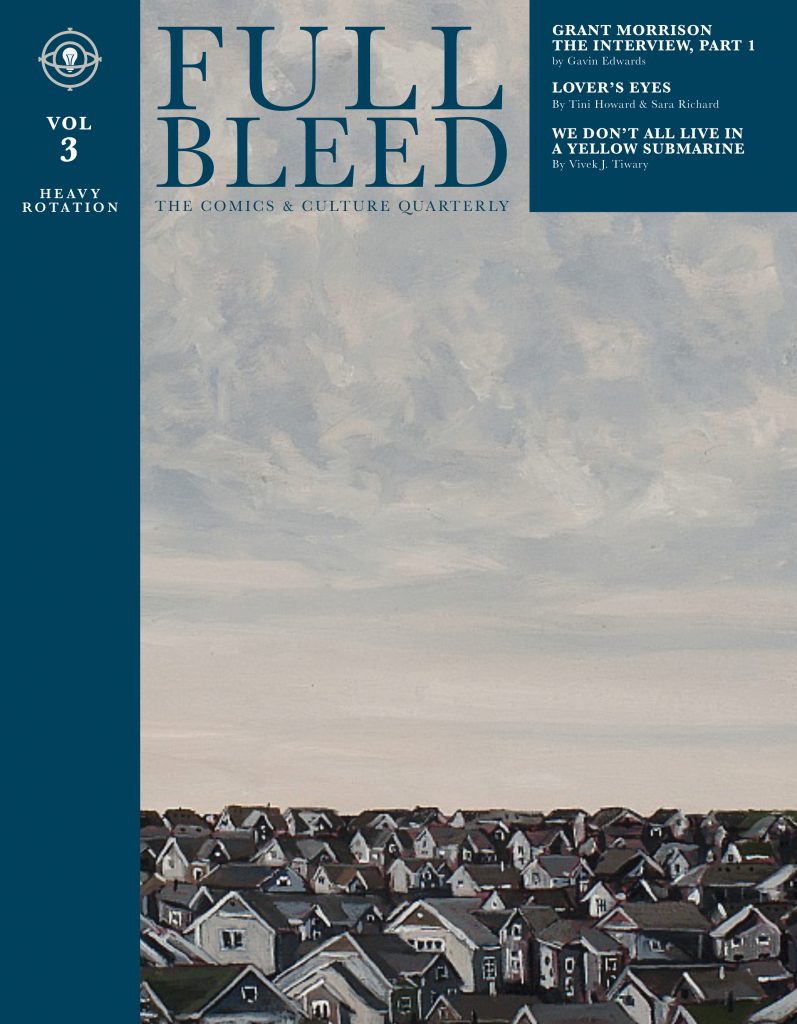 FreakSugar: For folks unfamiliar the book, what can you tell us about Full Bleed?

Dirk Wood: Well, it’s a 200-page, hardcover, print-only comics & culture “magazine.” One way I’ve been explaining it lately: Take Rolling Stone, a bunch of the old great Comics Journals, and an art book you’d want on your coffee table, mash them all up…Voila. You’ve got Full Bleed. There’s a little more to it than that, of course, but that explains it pretty well. I make the Rolling Stone comparison for a specific reason — Although it’s ostensibly about music, for decades now you can open a copy of Rolling Stone, and find something you wouldn’t expect, be it an article about climate change or the cartels in Mexico. It might sound a little…high-minded, but our plan is to do the same thing for comics, that Rolling Stone has done for music. The comics might be what brings a lot of readers in, at least for now, but once we’ve got you, we want to surprise you.

FS: What sorts of subjects do you focus on in Full Bleed?

DW: For the same reasons I just mentioned, we’re all over the map! In just the first couple of volumes we’ve had everything from an interview with Stephen King about his childhood love of comics, to a personal essay about an author’s grandfather being a holocaust survivor… a comic about the process of going through a second puberty due to taking hormones, an interview with a noted war-photographer, a straight-up horror comic involving a German u-boat in WWII, to….a story about whisky in Japan. I can’t think of a topic we’d avoid, be it in comics, fiction, essay, or interview.

FS: On to the campaign, what can you tell us about this new Kickstarter?

DW: It’s the third one, and for us, it’s important. The first two have done quite well, but as you can imagine, putting together a 200-page quarterly magazine is no easy or cheap feat. We need subscribers. Full Bleed is ad-free, and we definitely want to keep it that way. Anyone that’s aware of the current state of print publishing, well, it’s a weird time in the world. I feel that all of us out here that are enthusiastic about print have to help each other rise above the current market and figure out ways to make things work. And this is our way of getting the word out. That said, our first Kickstarter was the first one to ever distribute directly to comic shops via their distributor at a discount, and that’s been a big success. We sold more copies of Volume 2 in comic book shops than we did of Volume 1. That doesn’t usually happen. Obviously, we want it to grow from there, and I see no reason why it can’t.

FS: You have a wide range of stories in this installment. What can readers expect to see in this volume?

DW: Oh man. A completely fascinating lost interview with Grant Morrison. An essay about The Beatles’ Yellow Submarine by Vivek J. Tiwary that completely blew my mind. A discussion between Metallica’s Kirk Hammett and Anthrax’s Scott Ian about their shared history and love of geek culture. An essay by Abdulkareem Baba Aminu comparing his quest to find comics in his childhood in his native Nigeria, to the recent explosion of black geek culture via Black Panther and more, that really moved me. Tini Howard and Sara Richard combine essay and art for something called “Lover’s Eye” that defies explanation, and I’m not really sure you could see something like it in any other publication that exists. But I digress. I could talk about everything in there, but you’ll need to just pick it up!

FS: Thematically, would you say volume three has an overarching connective thread in how the stories are related?

DW: If it does, it’s slight. We didn’t want to do “theme volumes” per se, although that’s not to say we might not sometime. Certainly we will be releasing some collections later of some of the like-minded content, but we didn’t want to limit ourselves. Although, a funny thing happened. We didn’t really plan it at the start, but some slight themes did emerge. Volume 1 ended up being a lot of real-world autobiographical material, and ended up having a pretty international theme. Volume 2 ended up being a little more political, and dipped into some historic artistic controversies. Neither theme overwhelmed the book, but if you look for it, they’re there. Does volume 3 have a theme? Time will tell, but there do seem to be some connective ideas in motion and travel. And this one is a little more comic-heavy than the first two.

FS: What kind of rewards can contributors to the Kickstarter expect?

DW: Ah, well you’ll have to click through to see all of it, but some highlights – We have an original art tier from the mighty Geof Darrow. There’s an amazing interview with him in there, and he was gracious enough to contribute some original art. We’ve got prints, pins, slipcases for the first four volume run…. But really, the star is the book itself. 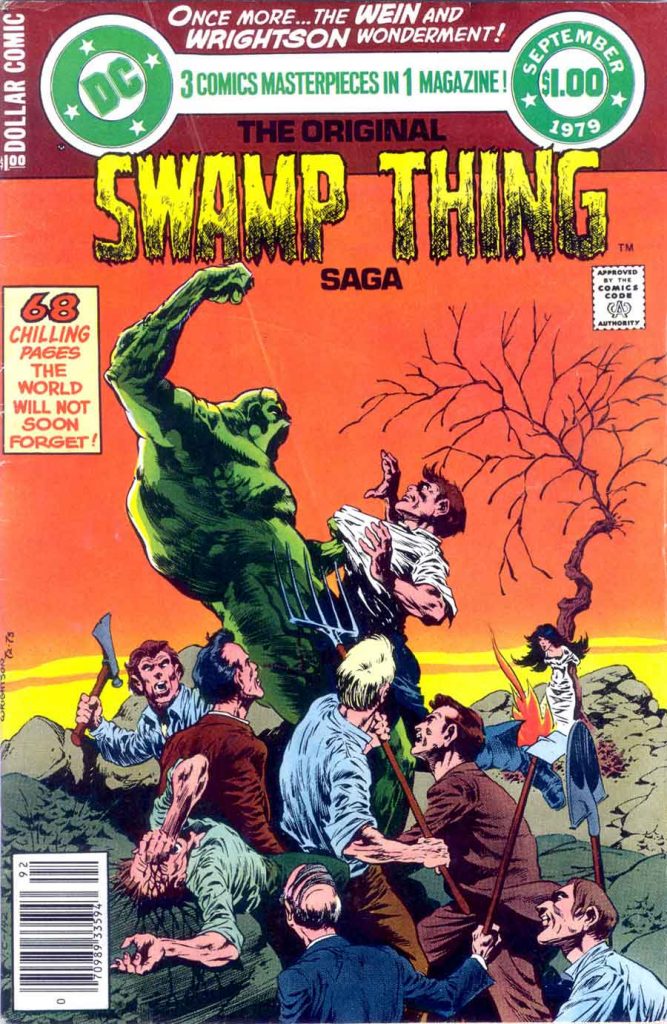 FS: What do you get out comic reporting personally? What about it pushes you to continue to pursue it and moves you?

DW: Boy. Well, I’ve been a comic fan since around the 3rd grade. I was in a 7-11, and saw a Swamp Thing cover. It was a “Swamp Thing Saga” $1.00 reprint, with a witch being burned at the stake on the cover. Of course later, I realized this was a reprint, and the cover of Swamp Thing #5 by the incomparable Bernie Wrightson, but at the time all I could think was “WHAT IS THAT?!” So – Why did this move me so much as a child? And why does it still move me so much now? Obviously, the art is fantastic, but there was a lot of fantastic art on the newsstands at that time. Why was I drawn so specifically to that, so much that it made me read that book cover-to-cover? “Art is in the eye of the beholder,” is one answer of course, but these are the questions that interest me. I’ve been asking them my whole life, and it’s a thrill to have a place to explore these things now.

FS: Following up on that, why would you say that comic reporting is important?

DW: Well, comics can do things that nothing else can. It’s a completely unique art form. Like a movie, it gives you a visual guide to a story, but like a novel, it leaves the reader some power in making that story move. Frankly to me, were it not for comic reporting, we’d be ignoring an absolutely critical, and singular, art form. We can’t have that, can we?

The Full Bleed Volume 3 Kickstarter is underway! As of press time, it has already met $6,225 of its $10,000! To help contribute to this worthy campaign, just click here for the details!

FULL BLEED is curated and edited by IDW Publishing’s Dirk Wood, alongside IDW Publishing Former CEO/Founder Ted Adams. When funded through Kickstarter, pledges will be delivered to backers next year. The FULL BLEED Kickstarter campaign is live as of Tuesday, December 11th and runs for 30 days.

“FULL BLEED is like Rolling Stone, the old Comics Journals, and an art book had a baby,” said Creative Director Dirk Wood, “We’re so proud to bring this baby into the world and now we’re coming to you. In days of yore, when running a magazine, one had to rely on two important sources of revenue — advertising and subscriptions.The bottom line is FULL BLEED is 100% ad free. To realistically sustain a publication of this magnitude, reaching out directly to fans is necessary. Kickstarter provides us the opportunity to interact with prospective readers, not compromise on quality, and remain free of advertising. So tell your friends.”

“FULL BLEED #1 was a hell of a book,” said LOCKE & KEY writer Joe Hill. “ I’m excited to see the series continue. Jump in. The water’s great.”

By merging the best in comics, fiction, non-fiction, deep dive interviews, opinion, history, think-pieces and more, FULL BLEED is a reading experience like no other, and a beautiful addition to any bookshelf. Looking through an international lens, but filtered through the unique perspective of the IDW:PDX satellite office in Portland Oregon, FULL BLEED tackles all aspects of the creative culture, and beyond — comics, music, film, tv, fine art, photography, design, politics and more. FULL BLEED seeks total diversity: diversity in content, diversity in creators and contributors, diversity in genre.

The Grant Morrison Interview, Part One, By Gavin Edwards, illustration by Peter Bagge

Monsters of Rock: An interview with Metallica’s Kirk Hammett, and Anthrax’s Scott Ian, concerning their shared history and love of all things horror and genre, By Russell Sheath, illustration by Tony Shasteen

We Don’t All Live in a Yellow Submarine: An Essay, By Vivek J. Tiwary

Lover’s Eyes: An Essay, By Tini Howard, with illustrations by Sara Richard

May 1968: The Revolution that Almost Was – A comic essay, By Julia Alekseyeva

Black’s In: When a “Blackout” is a Good Thing,  Text and illustrations by Abdulkareem Baba Aminu

Following the Bloody Trail of the Shaolin Cowboy: An interview with Geof Darrow, featuring never-before-seen art, by Hannah Means-Shannon

The Underdream: A new comic, By Josh O’Neill and Gideon Kendall

The Lost Boys of the U-Boat Bremen: Chapter Three, By Phillip Kennedy Johnson and Steve Beach

Down Mexico Way: A travel log, By Jarrett Melendez, with illustration from Danica Brine

The Shapes: A new comic, By Adam Knave & Andrew Losq

The Big Smoke, a photo essay, By Joel Meadows

Blade Runner: Technology Steals the Soul — An essay, By Tom Waltz, with illustration by Santipérez

The Five Most Important Underground Cartoonists, an essay, By Bob Levin