Welcome to the NOT@CON edition of FreakSugar’s DIY Comics! This installment features Kevin Powers and his upcoming project, Patriot-1. Currently, he’s not at Comic-Con either and his Kickstarter for Patriot-1 has a few days left…

FreakSugar: First and foremost, Kevin, tell us a little bit about yourself and your background with comic books.

Kevin Powers: I’ve read comics my whole life. I don’t exactly remember the first comic I ever read, but I remember the first one I ever bought with my own money – Darkwing Duck #1. I’ve enjoyed the comic renaissance of the past dozen years, but I really need to get in it too. I’ve worked part time at a Local Comic Shop since I was 17, I handle most of the digital presence for the store now. I was a screenwriting major at Ithaca College, a one-time intern at Marvel Studios and I am currently a writer and content manager for WWE.com.

In 2009, I founded TJ Comics, a creator-owned imprint as an outlet for my stuff and other creators.

FS: What’s the premise for Patriot-1? Tell us a little bit about the characters in your project.

Powers: The blurb is this:

“Patriot-1 is the story of Staff Sergeant Ken Baker, a Delta Force operator who is the lone survivor of an attack in Afghanistan. Upon escaping captivity, he finds himself embroiled in a conspiracy that results in a team from the CIA’s Special Activities Division seeking his help to unravel the mystery of “Operation Quisling.”As the war in Afghanistan has all but ended, the conspiracy reveals a new threat, one that prompts Baker to make a unique statement in “super-heroic” fashion.”

It’s basically a spy novel. The main character is rooted in the same moral values of the Golden Age patriotic heroes of World War II. He’s a soldier first and foremost, there’s no real political messaging, just a guy dong the right thing. He’s supported by a diverse cast that each plays a specific role based on their skill set. 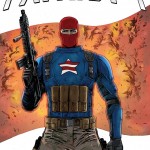 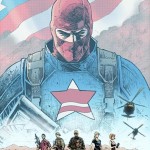 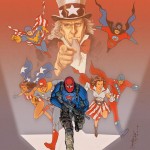 FS: How did you go about organizing Patriot-1?

Powers: I started Patriot-1 is 2007. I never served in the military, but I have a strong interest and support for special operations forces like Delta Force and Navy SEALs, and I often consider them real-life superheroes. That was kind of the idea, a soldier who essentially becomes a super-hero, albeit non-powered. I’ve done a lot of research, talked to a lot of military people and tried to ensure a gritty and realistic story as much as possible, in the same vain as the old Kubert Sgt. Rock books.

It was originally a five-issue series, but after a few stalls, it took on it’s current form of a 176 page graphic novel.

FS: What are some of the challenges of working in the independent market?

Powers: It’s expensive and it’s hard to find artists. More than that, it’s often difficult to keep those artists focused. There were a few artists attached before Dexter, one pretty well known. But they just didn’t work out because of timing or the general inability for an indie publisher to compete with the big guns

The toughest thing about indie comics is budget and standing out in a sea of white noise. I pride myself on the quality of my work, both story-wise and art-wise. But it’s very hard to get noticed in the crowd, especially when there are so few comic sites out these that will take the time to cover your work. So, on that note, thank you. Really.

FS: What have you learned about creating comics from your experiences so far?

Powers: Aside from the expenses and the white noise, the most important thing for any indie creator is to be consistent. If you release issue 1… you better have issue 2 ready to go soon. I am guilty of this. Granted, two of my titles have stalled 1) because one of the artists got work with Marvel and 2) the other book was put on hold for Patriot-1.

In 2011, I had a table at New York Comic Con. It was fun to finally be there as a creator as opposed to a reviewer (which I once was) and then a wandering professional, but the problem with exhibiting at those big shows is you are competing with everyone else, INCLUDING Marvel and DC. I did okay from a sales perspective, but after tallying up expenses, not so much. I rushed to print a kid-friendly comic that didn’t really move. That was a mistake, not because I offered it, but because everyone thought it was free. People pay so much to go to the show and the big publishers are handing out free stuff – which is awesome – but it can adversely affects the little guy. And again, at a big show like that, the white noise thing comes into play. Smaller cons like Albany, Baltimore, Boston and the Connecticut ComiCONN are fantastic for creators.

That NYCC experience was also an epiphany and when I decided that I’d probably completely rewrite Patriot-1 from start to finish as a graphic novel. Give people the whole story and not worry about it stalling or dropping off.

FS: You’re currently attempting to Kickstart Patriot-1; how difficult has the process of marketing your Kickstarter campaign been?

Powers: I’m probably annoying the hell out of all my high school and college friends on Facebook. I’m sure I’ve been hidden by now as I don’t post pictures of my babies or anything, haha. It’s really hard to gauge how social media helps. I don’t have a big Twitter following (@kevinpowers70 and @TJComics) so that has kind of been…worthless, maybe. Even running Twitter ads is a little suspect.

Facebook is a different story. I started promoting Patriot-1 over a year ago. Built a following there and with the TJ Comics Facebook, I launched a webcomic that ties into Patriot-1 so there is an audience out there. Have they pledged? Harder to tell. Is Facebook worthless? Some days. The biggest problem is that because of their algorithms, you don’t know who is seeing your posts. Even when you pay for likes or run ads…your page likes aren’t all seeing the post. This is a whole other conversation outside of comics, but Facebook has defeated its own purpose. And I can post about Patriot-1 20 times a day and get 100 likes but those “Likes” can end up meaning very little if they don’t convert to pledges of some kind or the book reaching a new reader.

With that being said, my family, friends and co-workers have been incredibly supportive. And there does exist a community of comic creators who support Kickstarter – both well-known professionals and just guys making comics – who are insanely supportive. They have made a great difference. It’s a great community and it really shows the loyalty that creators have to one another. It’s really, really great. 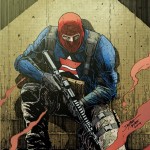 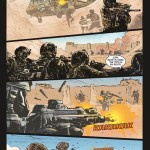 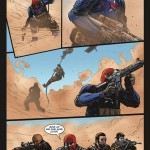 FS: Who are some of your creative influences?

Powers: As evidenced by Patriot-1, Tom Clancy is a huge influence. His attention to detail, his fascination with all facets of the military is just something else. Both his fiction and non-fiction work is highly influential. Spielberg and Clint Eastwood are also huge. Raiders to me, is the greatest movie ever made. And I’ve watched every Eastwood western more times than I can count.

FS: What are some of the realities of publishing your own intellectual property that you were not aware of until now?

Powers: I think most importantly, make sure you protect it all around. There are some protections automatically built in but Copyright (cheap) and Trademark (expensive) exist for a reason.

Also, love your creation. It doesn’t have to be perfect, but if you don’t love it and really believe in it…why should anyone else?

FS: Since you’re not in San Diego this weekend, will you be attending any other trade shows this weekend?

Powers: Definitely Connecticut ComiCONN which is becoming one of the best shows overall, and Albany which is the best little show on the East Coast. I’m flirting with Baltimore and I’m actually entertaining the thought of New York again. We’ll see… I have three kids under two…so I must tread lightly!