The X-Men character Domino has enjoyed a quarter century of notoriety since her first comic book appearance in the early 1990s, and it’s easy to see why readers gravitate toward the mercenary mutant hero. Her costume and visual aesthetic are instantly engaging, the black-and-white motif and signature eye mark cutting a striking image. Add to this that her personality is full of charisma and smart-assery with the skills and the goods to back it up, and it’s no wonder she’s become a fan-favorite among readers. 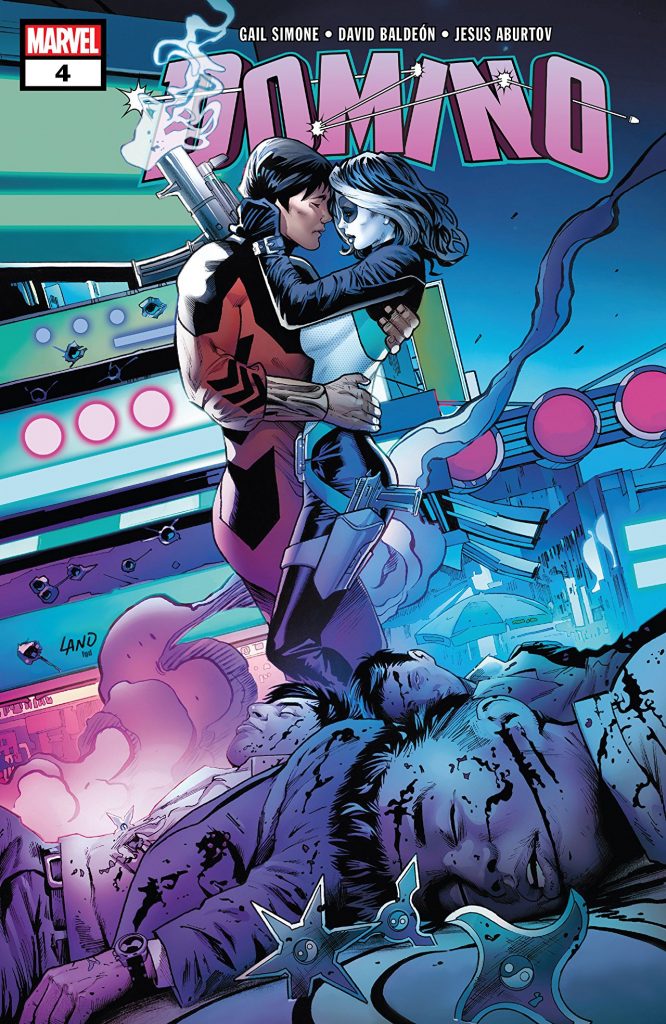 But as much potential Domino has and as many kickass moments she has had over the years, there’s a feeling that Domino has never enjoyed the solo spotlight she has deserved, relegated—with a few exceptions—to a mostly supporting role in the Marvel mythos. Thank goodness, then, for the new Domino series, with an Ocean’s 11-level comic book creative team—writer Gail Simone, artist David Baldeon, colorist Jesus Aburtov, and letterer Clayton Cowles—that is giving Dom her due, and that’s especially on display in issue #4, out now from Marvel Comics.

Domino’s mutant luck powers—which enable her to navigate through even the hairiest of situations—are on the fritz after an encounter with a mysterious old man and his caretaker Topaz. Feeling vulnerable, as anyone would, and seeking to get her powers under control, Domino heads to Hong Kong to study with Shang Chi, sometime-superhero and always-Master of Kung Fu. Meanwhile, a bit perturbed at not being asked to go with Domino on this mission, her allies Outlaw and Diamondback decide to go out on their own to investigate the mystery of the elderly gentleman and Topaz—with less than desirable results. However, we do learn more about Topaz and the man’s connection to Domino, and it’s nothing too swell for our hero. 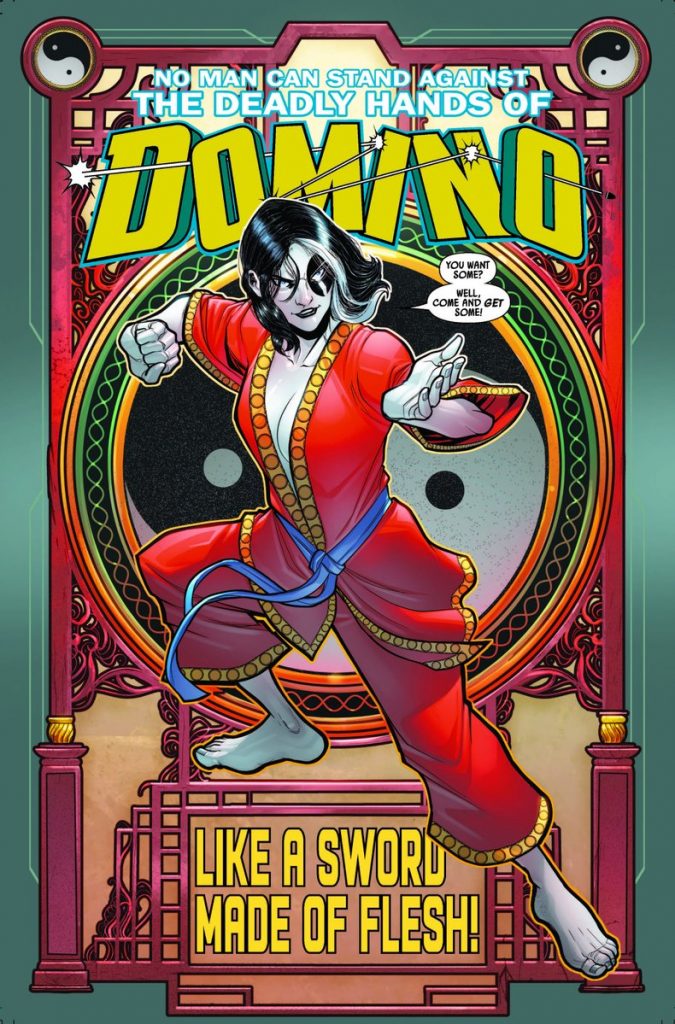 Gail Simone is always more than nimble at making their characters under her care be their best selves, and Domino is no exception. While Dom has always been in a team member role in a group of super-powered people, Simone makes her in charge—this time with Diamondback and Outlaw—which forces her out of her comfort zone and makes her step up into a leadership capacity. It’s a treat for long-time Domino fans, it’s a treat to see. At the same time, it’s clear that it’s a transition for her, which is a smart move to make on Simone’s part; Domino still has loner tendencies, including leaving her friends behind to work on her powers, no matter her reasoning.

But we also see in this issue that sometimes her lone-wolf propensities are layered. While she feels like getting her luck powers squared away is something she must do alone, her anxiety at losing those powers may also be a reason she shuts out Outlaw and Diamondback. And she copes with that anxiety in a number of ways, as we see in her interaction with Shang Chi. As she initially trains with the Master of Kung Fu, she makes several jokes, a coping mechanism a lot of use to mask our uncertainty and fear. 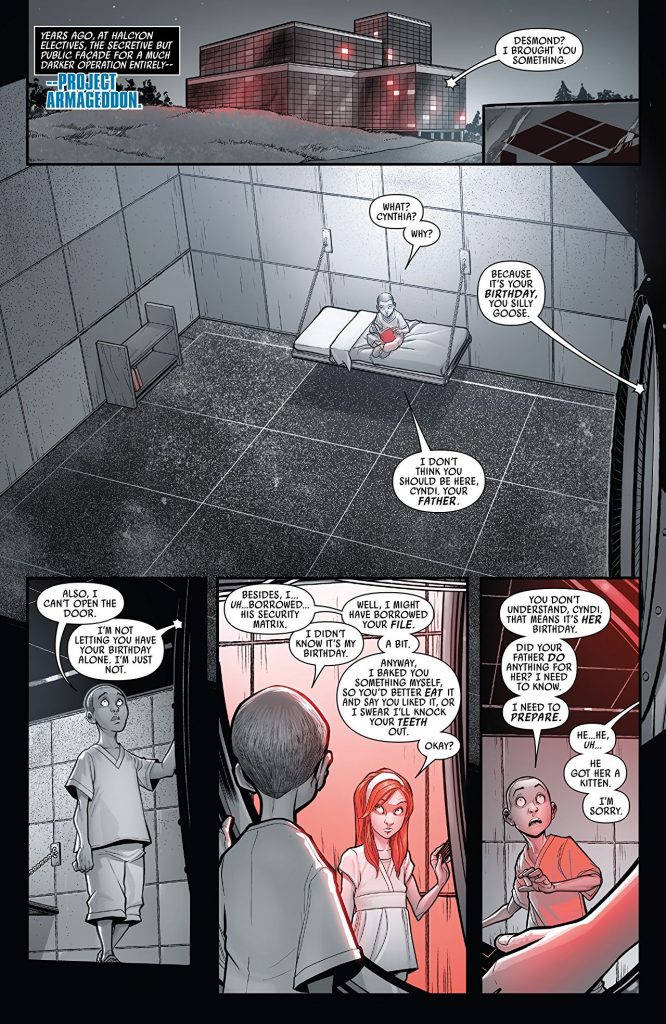 Domino’s joking around Shang Chi isn’t just tied to her hand-wringing over her powers, however. She clearly finds Shang Chi attractive, charming, and sexy—he’s the Master of Kung Fu, after all. And it’s nice to see Shang Chi receptive to this. It’s such a nice touch by Simone, showing the ways the two characters’ flirtatiousness is sweet and manifests in its own way.

David Baldeon takes this narrative character interaction and just nails it on every level, making the art and flirty behavior and sometimes-awkwardness just pop off the page at every turn. Baldeon knows how to frame an action scene and frame it well, but, I’ll be honest: I could read a whole series with Baldeon’s drawings of Domino, Shang Chi, Outlaw, Diamondback, and Deadpool just hanging out, going to clubs, eating bad boat food, and that would be just dandy. Jesus Aburtov’s colors make the action, big and small, stand out on every page, glowing or receding as the scene calls for. Clayton Cowles continues his run as one of the best letterers in the comic book business by giving readers clear, sharp, readable letter design that keeps the story moving without distraction, but with emphasis when necessary.

By adding emotional depth beneath her bravado and putting her goals and wants center-stage, the entire Domino series—and issue #4 in particular—has given readers even more reason to love the luck-powered hero, and the X-books and the wider Marvel Universe are better for it.

Domino #4 is on sale now from Marvel Comics.

SOMEONE IS ABOUT TO GET LUCKY……and it just might be Shang Chi, Master of Kung Fu! If he plays his cards right, that is…Domino’s search for answers about her past takes her to Hong Kong! Will she stay on the straight and narrow? Or go right for the seedy underbelly?

Domino Works to Get Her Powers & Groove Back in Issue #4
By adding emotional depth beneath her bravado and putting her goals and wants center-stage, the entire Domino series—and issue #4 in particular—has given readers even more reason to love the luck-powered hero, and the X-books and the wider Marvel Universe are better for it.
9Overall Score
Reader Rating: (1 Vote)
9.4