It looks like Donald Glover is finally getting his wish to “spin a web, any size.”

USA Today reports that the man behind Community’s Troy Barnes and Childish Gambino will voice Miles Morales, who fights crime in an alternate universe as Spider-Man, on the new season of Disney XD’s Ultimate Spider-Man: Web Warriors. In the story arc “Spider-Verse,” Peter Parker will chase the villainous Green Goblin through various parallel worlds, attempting to stop the Goblin from obtaining DNA from those worlds’ Spider-Men and Spider-Women. During his trek, Peter will meet Miles, who has taken the mantle of the wall crawler after that world’s Peter Parker died fighting the Goblin.

The news comes after years of lobbying from fans—the Twitter #Donald4Spidey campaign, for example—and, in part, Glover himself to play Marvel’s premiere superhero. During pre-production of the Marc Webb-helmed The Amazing Spider-Man, Glover petitioned to be granted an audition for the part of Peter Parker, a childhood hero of the actor. Community showrunner Dan Harmon even backed the cause, going so far as to have Glover’s Troy Barnes appear dressed in Spidey PJs during the show’s second season premiere. While Glover did not achieve his goal, with the role eventually going to Andrew Garfield, the movement led to the creation of the first black/Latino Spider-Man. 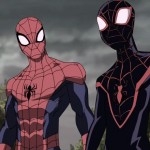 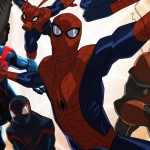 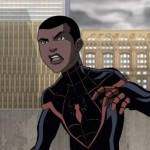 Marvel writer Brian Michael Bendis created Miles’ character and had already written the first issue featuring Miles as the wall crawler when the episode of Community featuring Glover in his Spider-Man pajamas aired. Bendis told Newsarama in a 2011 interview

Glover seems to agree. “That’s the great part about the Spider-Man costume: He can be anybody,” Glover told USA Today. “Spider-Man could be a girl. Spider-Man could be an old man. You don’t know. So I just tried to be as me as possible, because you’re always just going to bring it back to yourself when you watch the show.”

The “Spider-Verse” story arc seems to be inspired by writer Dan Slott’s upcoming Spider-Man crossover of the same name, which will feature, as he has said time and again in interviews, EVERY SPIDER-MAN EVER, ensuring that Miles will team up with Peter in that tale as well. It will be the first time the two have reunited since their first encounter in writer Bendis’ Spider-Men miniseries.

Disney XD’s Ultimate Spider-Man: Web Warriors premieres this Sunday at 9AM. Glover will debuted as Miles Morales in the “Spider-Verse” storyline next year. Here’s hoping that Glover gets more opportunities to web-sling as Miles down the road.