I’ve been going through severe withdrawals now that “Cult of Personality” no longer blasts from the Titantron, heralding the entrance of the Best In The World, CM Punk, during WWE events. It’s old news now that Punk abruptly left the company a few hours before RAW went to air on Monday, January 27th, for undisclosed reasons.

Granted, those “undisclosed reasons” are still a huge topic on all pro-wrestling forums and rumor sites – but I’m not dwelling on that petty shit here! Nope, today, my rabid collecting of Mattel‘s WWE figures and my disappointment with Punk’s departure have intersected and blossomed into bittersweet nostalgia thanks to the latest exclusive from Ringside Collectibles. This Elite-style version of the Second City Saint is based on his time in the (WWE-relaunched version of) ECW and I’ve been waiting semi-patiently for it to finally ship since placing the pre-order months ago– and now Punk has arrived!

The packaging, which I normally ignore when engaged in toy-talk, is worth noting as it is designed specifically for this figure. The box is mostly red and black with a large image of CM Punk crossing his arms to the left of the window. The “Ringside Collectibles Exclusive” sticker has also been stuck on the blister– practically beating you over the head with the exclusivity of this thing! Various images of CM Punk (sans smile) are peppered on the sides of the box, with a full-body image on the back next to this bio:

Growing up idolizing WWE Hall of Famer “Rowdy” Roddy Piper, CM Punk had no doubt that his future belonged inside the ring. He began his quest in the independent ranks, where he earned a reputation as a master technician, before joining ECW in 2006. At that year’s Survivor Series, he demonstrated his lethal assimilation of fighting styles and emerged from Team DX as a fast-rising star. In 2007, Punk made good on that promise , winning the ECW Championship. After winning the Money in the Bank Match at Wrestlemania 24, he went on to cash in his World title opportunity and captured the World Heavyweight Championship. Constantly thrilling his loyal followers and wiping his opponents out with his signature “Go To Sleep” maneuver, he has certainly backed up his claim that he’s the “Best in the World”.

Still, screw all that noise. Let’s rip this sumbitch open and put him to the test!

Like 99% of Mattel’s Elite line, Punk utilizes a new head sculpt while a number of re-used parts make up the rest of his body. CM Punk has probably received more headscans than any other Superstar in the WWE simply because he changed his look a few times a year. Long hair, thick beard, shaved head, Wolverine-like chops, etc., have been sported by the Voice of the Voiceless, but this version from his beginnings with company has never been preserved in plastic – until now!

The slicked-back hair and Van Dyke are as new to this sculpt as the uncharacteristic smile. Honestly, upon first seeing the smiling mug when the figure was revealed, I wanted to punch through my monitor in a nerd-rage protest that would surely end in blood and tears (like most of my nights). But the more I see this figure in person, the more I dig it. Hell, it’s still way better than Mattel’s Wrestlemania 29 Punk sculpt.

In All His Glory

GTS through a table

CM Punk has been molded in the appropriate colors where possible. The paint that has been used is cleanly applied, including the nice tampograph on the back of his trunk, and by “back” I mean “ass”. His tattoos (which aren’t as plentiful since this was pre-chestpiece) are well done and none of the colors merge with the others. My only complaint is they ran the blue background of his left sleeve too high up on his shoulder. You see, CM Punk has both shoulders sporting very copyright infringement-friendly choices: The COBRA logo from G.I. Joe on his right and the Pepsi logo on his left. This causes Mattel to edit out his shoulder ink and leave them bare. Thankfully, there are aftermarket customizers that sell amazing decals to make up for it. [Editor’s Note: You can see some of the decals applied to the shoulders on one of the Punk figures in the last photo of this review.]

Punk in his natural habitat.

Nice lettering– on a horrible shirt

CM Punk comes packaged with a microphone, t-shirt, and the ECW Championship Title. The mic is a single piece of black plastic with the ECW logo emblazoned on it. Naturally, I’m putting it in Paul Heyman’s grasp as soon as I finish writing this thing. The t-shirt is black plastic and snaps up the sides to stay on the figure. The printing on the front and back and impressive, but that thing is headed to my parts bin. Why use a shirt that doesn’t allow the figure to raise his arms?! Cloth shirts are the way to go and it’s nice to see Mattel is releasing a cloth hoodie with Punk’s final Elite later this year. The real accessory gem is the long-awaited ECW Heavyweight Championship! This is the belt I spent my teen years seeing being passed between the likes of The Sandman and Taz. The belt is made of soft plastic with vac-metal plates attached. A black wash was used to bring out the sculptural details with other colors stamped on the from. The lettering has been applied well and this thing will be making it’s way around my Rob Van Dam figure’s waist in a matter of moments! Sorry, Punk!

Overall, this is one of my favorite Flashback figures to be released in quite some time– but will remain my 2nd favorite Ringside Exclusive since the (incredibly tough to come by) SES version of CM Punk is a tough figure to beat. As of this writing, Ringside had the ECW CM Punk still in-stock and you can get your own here. Or not. Doesn’t matter. More for me, really since I think I’ll order another of the Best (Quitter) in the World! (Hey, I’m still bitter about it!) 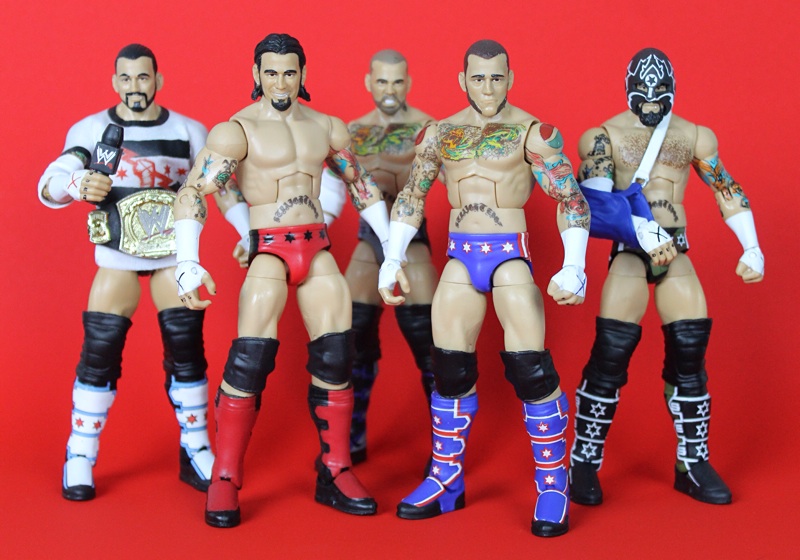