This year marked the 55th anniversary of the first appearance of the Uncanny X-Men, one of Marvel Comics’ premiere superhero teams. With those 55 years comes a wealth of history that, while fascinating, is not always immediately digestible, especially for the casual reader.

Comic creator Ed Piskor hopes to change that and bringing an accessibility to the X-Men’s past with his comic X-Men: Grand Design. Split into three two-issue volumes, Grand Design looks at the first 279 issues of X-Men (which became Uncanny X-Men) and remixes them into one cogent story. Using the sensibility he applied to his comic Hip Hop Family Tree, Piskor creates a tale that will appeal to both long-time X-Men fans and a newer generation of readers. 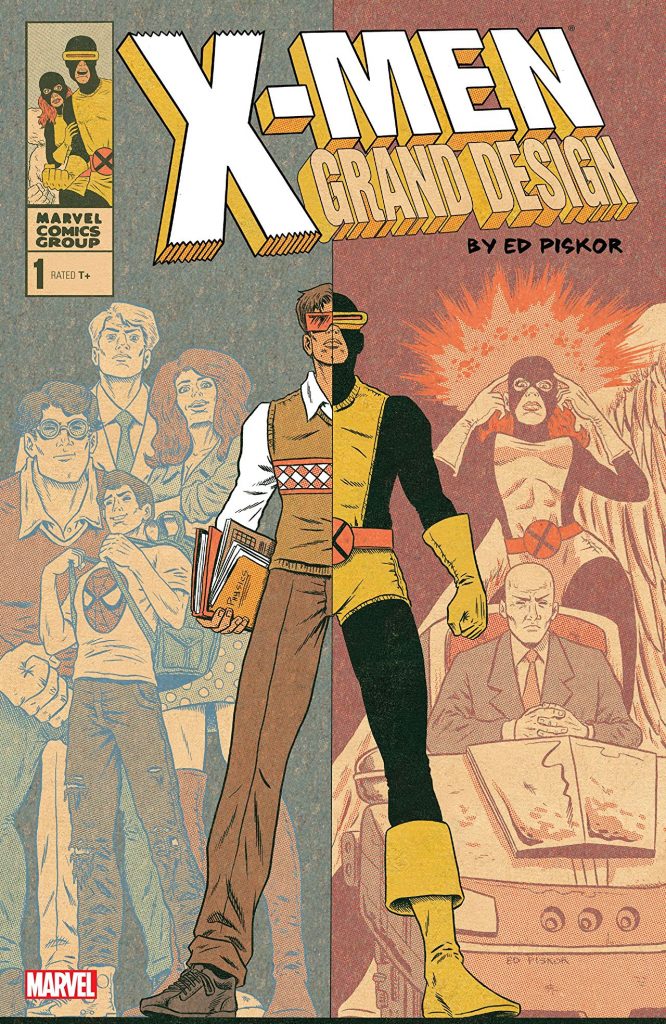 FS: It seems like you’re having a lot of fun with Second Genesis. Would you say this is era of X-Men stories you’re adapting for this volume is your favorite?

EP: It’s definitely primo content for sure. It’s not my favorite era, though, because favorite era would be the wild stuff I was reading as it was coming out that inspired me to become a cartoonist. From the Marc Silvestri stuff to the Jim Lee would be my favorite.

Is it the best? No. The best tenure of X-Men #1 to #279 is probably the material I use for this first issue. The John Byrne era for sure. I don’t think that would be a controversial statement. Most people would probably agree with that. 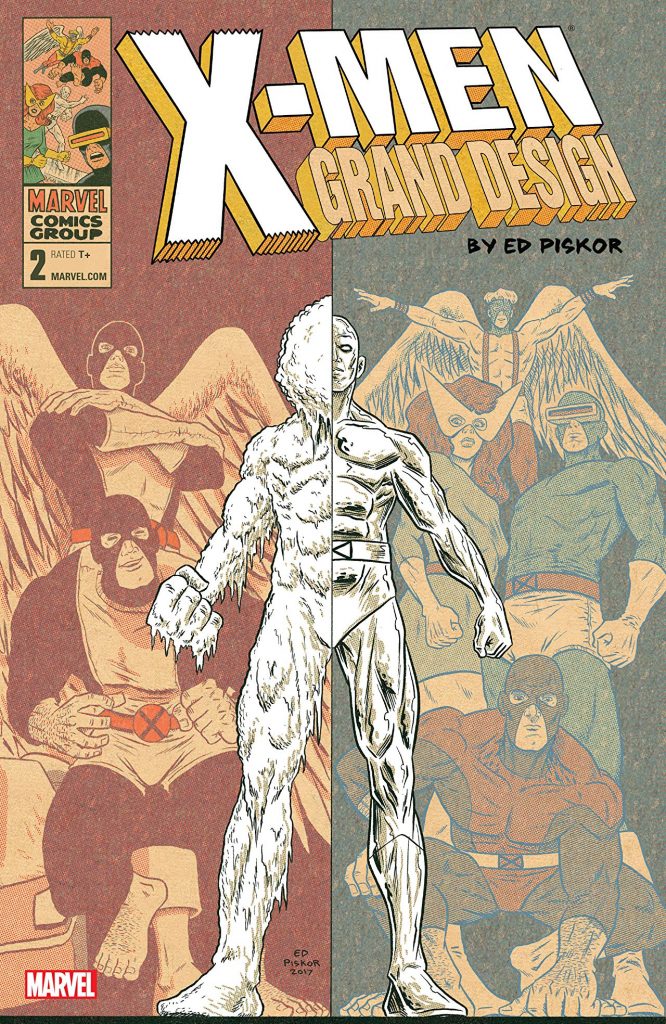 FS: There are so many iconic stories in that era, more that are covered in this volume than in first volume. Did that awareness impact how you approached Second Genesis?

EP: The materials of X-Men #94 to #137, you can’t beat. They were some best comics coming out at that time. The level of craft in terms of the art is still a high water mark as far as I’m concerned. There aren’t monthly superhero comics that look that good now.

EP: And consistently. The fact that that creative team worked together for years: They started on issue #108 and issue #137 is when Phoenix dies. They were able to create a synergy by way of working with each other a couple years, which is a pretty rare thing these days if it happens at all. I don’t pay too much attention to what’s going on on the racks nowadays. 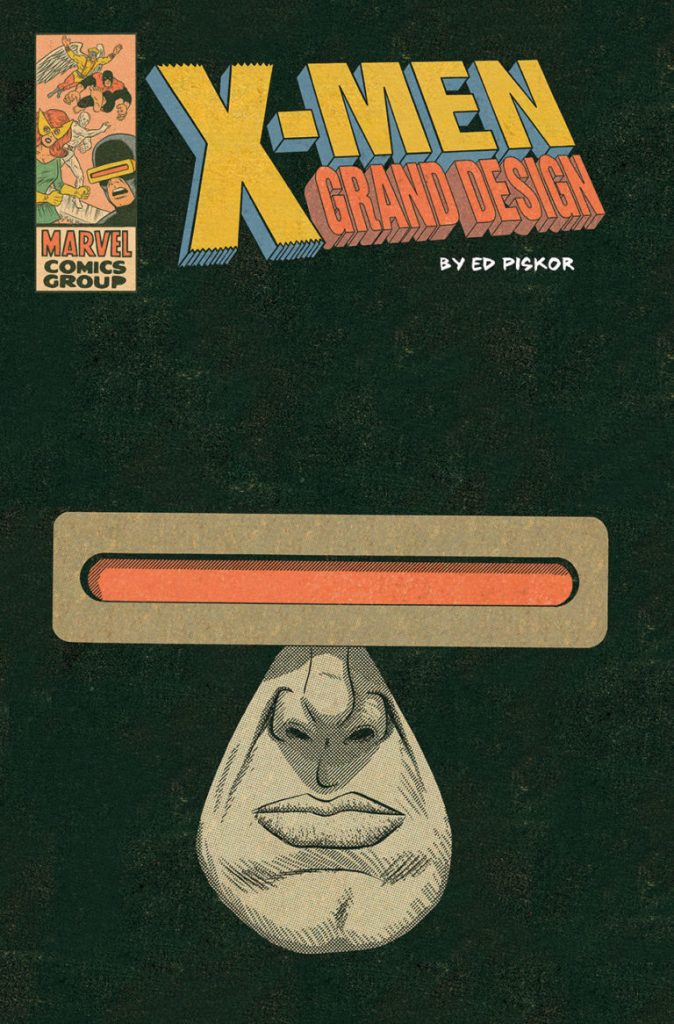 FS: With this book and Hip Hop Family Tree, are you a lover of history?

EP: Any writer is because what is history but cool fucking stories, man.  That’s what I’m in for more than anything, the stories. That was the class I was able to pay attention to most in class, no problem. But I also have a built-in curiosity that moves me to investigate. When you’re young, you’re a fan of a thing, but then you realize it is a derivative of something else. So it’s like let me to dig deeper and investigate what inspired what I like. It becomes this big game where you keep digging further and further and further.

It’s just the way I am because of my natural curiosity. Right now, as I’m drawing this last X-Men book, I’m learning all about the history of video games and the console wars and the people involved in that who made and broke the American video game industry and made it all over again. I doubt any comic thing will come from it and that’s not why I’m doing it. I’m just curious. The stories are new and interesting to me. That’s the kind of history I’m into: the history of skateboarding and pro-wrestling computer hacking and hip hop. Pop culture stuff, that is from the cloth that I’m cut from. 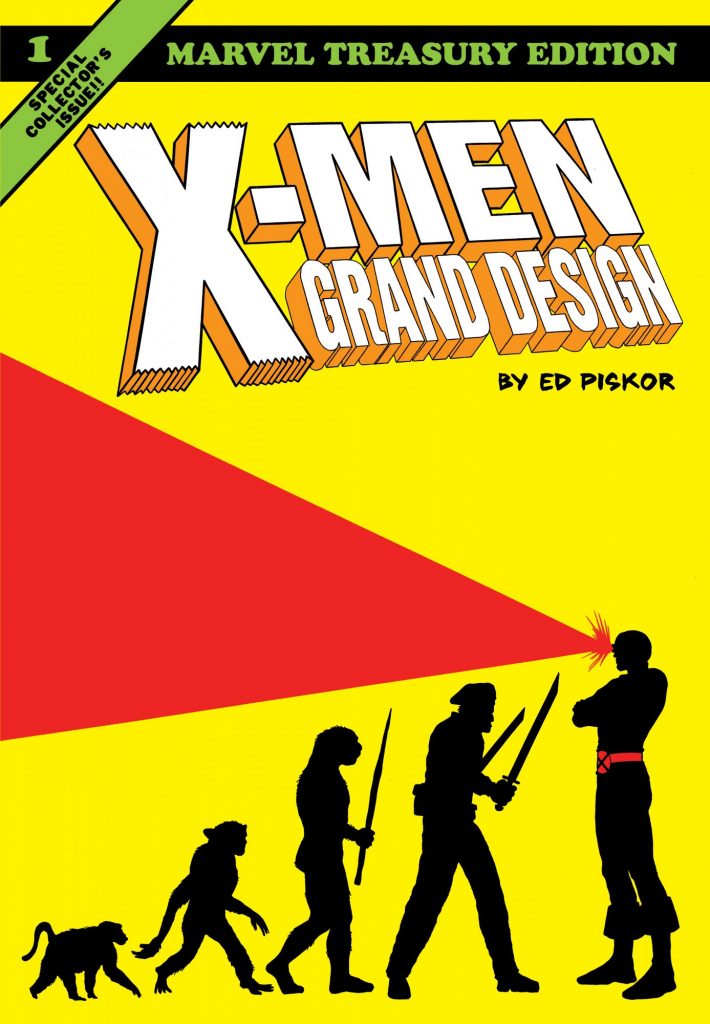 FS: Are there any lessons from Hip Hop Family Tree that impacted how you approached Grand Design?

EP: I think so. When you’re dealing with such a large cast and so many moving parts, you have to figure out the best use of the comics panel, meaning how much stuff can you have going on at once. How can you make use of this single image to get across a large amount of information. That Hip Hop Family Tree comic had lessons like that that I brought directly to X-Men.

And I will say that when I’m done with this, my next story will not be like this. [laughs] This took me a long time, man. It takes me six months to do an issue of this. I have so many ideas that I may just need to focus on a comic that has less than 100 characters. 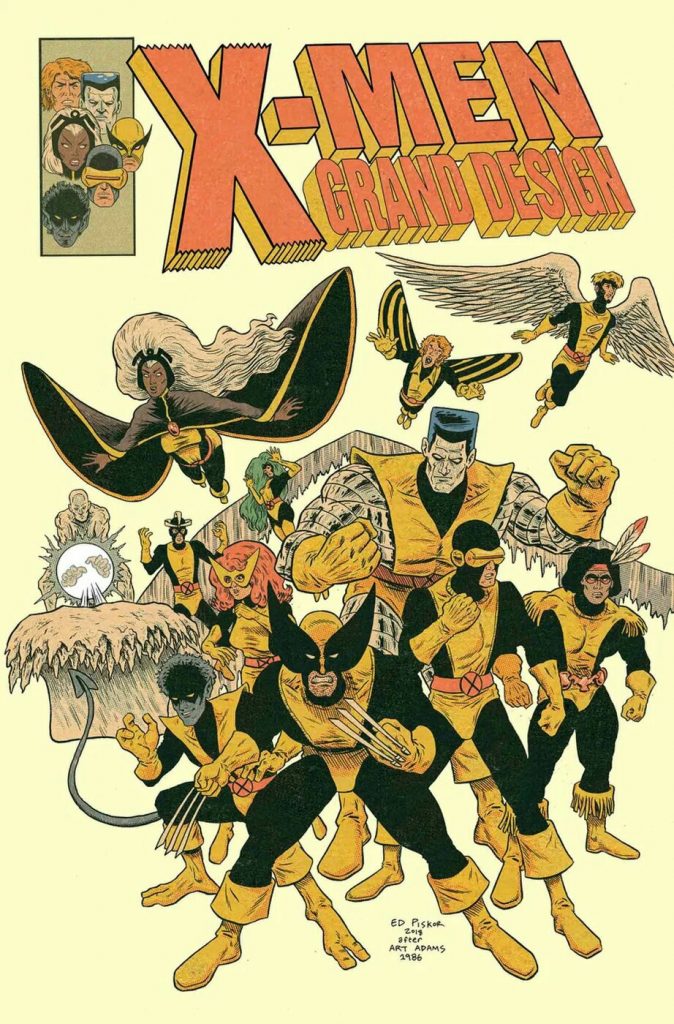 FS: I follow you on Twitter and I appreciate you breaking down the process of bringing one of these issues to life and showing the gridded pages you use. You seem like a work horse.

EP: Yeah, it’s a seven-days-a-week operation. There is no slacking. When I put up those grids, if you look closely, you can tell that I have made my own files that have pre-printed borders so I can ink over top of them and choose the ones that I want. I have created a process that not that far from a NASCAR pit crew where I’m shaving just little bits of time off the process so I can get a little bit more done. This is a process I’ve been using for years and years. Use a blue pencil instead of a grey one so you don’t have to erase. You take off an hour’s cleanup per page. That’s a big part of the gig, too. 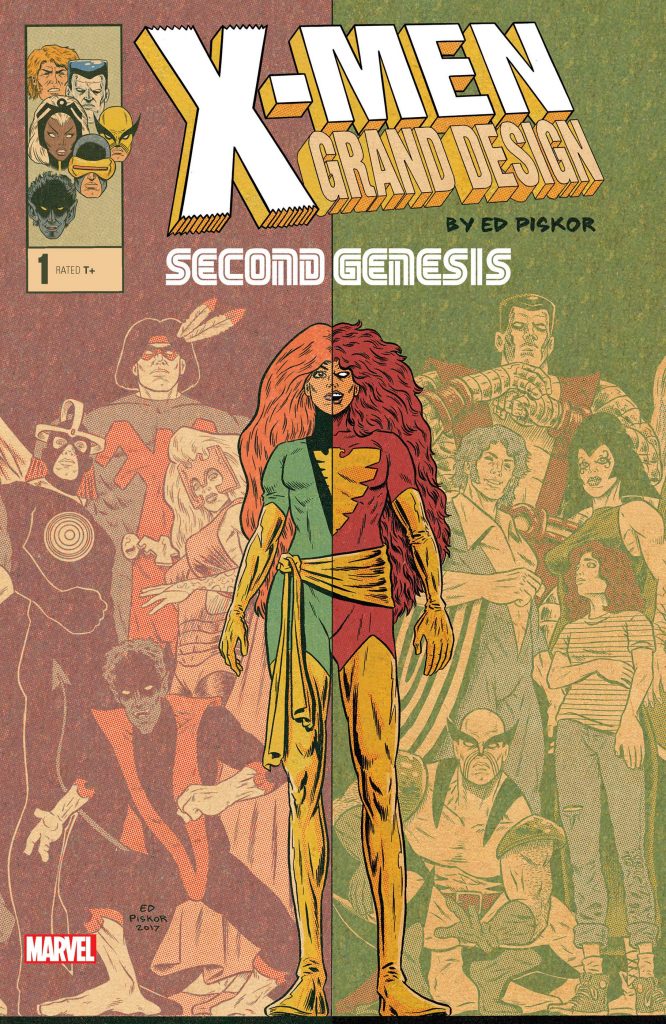 FS: You pack so much detail into a page. I think I read you said you wanted each page to tell a complete story.

EP: Yeah, I wanted it to be episodic like a dense, classic American comic strip that would come out on Sunday in the funnies; back in the day when a strip would have the entire broadsheet of a paper, above and below the fold. If you read those things, like Prince Valiant, it’s a complete scenario. That’s as much as you should read that week. If you read too much, you’re being inundated. That’s almost the proper way to read Grand Design. Read a page or two a week. Then sit with it in your mind for a while.

FS: It’s dense. I found myself reading the issues more slowly the second time through.

EP: There’s a lot there. You figure, there’s 50 issues of monthly content comprise grand design. It’s an info-dump of a fashion, for sure. The comic is inspired in part by this video I saw on YouTube. This guy did an oral history of Japan in nine minutes. So if you can do the oral history of Japan in nine minutes, you should be able to do a 240-page X-Men book that contains everything and is fun and has all the beats. 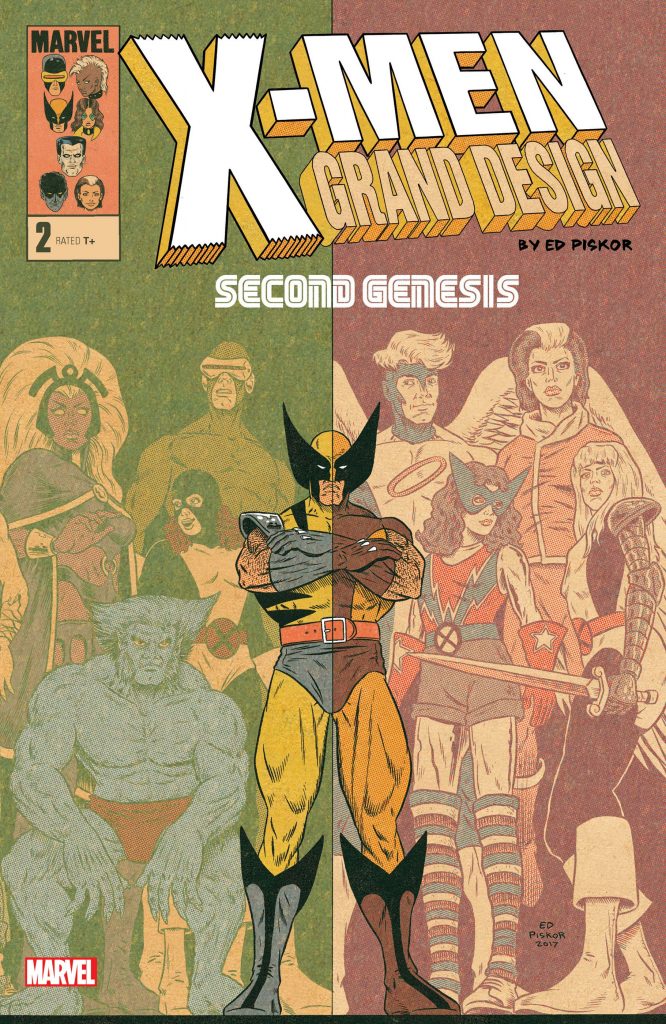 FS: The first few issue of Grand Design just focused on a singular comic title. Did the crossovers with other titles later in Uncanny X-Men give you issues?

EP: Major issues. I’ve finished my story. It’s in stone. Little nuances will change in the process, but I know when it ends and I know how it ends and I know how I got there. But for the last series that comes out next year, boy, I had to read a lot. I read 3,000 pages of comics because there is X-Factor, there is New Mutants, there are all the tangential limited series that I absorbed to feed the narrative of my story.

Then there is stuff like the “Inferno” crossover that affected every other series in Marvel’s lineup: Spider-Man, Daredevil, whatever. The exercise, in a lot of ways, is about getting to the core of what this series or that series is all about and getting rid of the chaff. Sometimes, especially during “Inferno” and New Mutants, the chaff is good. So, even if you don’t use it, that should mean that the story is better.

There are many challenges. I have 240 pages to tell my story. All these other miniseries are good for what they were, but I stand behind how this whole comic is going to wrap up. I stand behind it in a big way. We’ll see what the readers think. Hopefully, they’re on board, but I’ve absolutely given it my best shot.

It’s ALL-NEW and ALL-DIFFERENT! Witness Wolverine, Thunderbird, Colossus, Storm and Sunfire suit up as X-Men for the very first time all over again! All through the lens of comics auteur ED PISKOR, who lovingly researches, writes, pencils, inks, colors and letters every page just for you! The second act of X-MEN GRAND DESIGN begins now!