Every startup or new business venture takes capital, superheroics included. Unfortunately for some aspiring super-folks, not everyone is a Bruce Wayne with a trust fund or stumbled into superpowers. For those who still see saving lives and stopping supervillains as their life’s calling, there are avenues to borrow the cash required to fund those aspirations.

However, if the superheroes default on their loans, the Paybacks may come a’knocking. Working off their own unbalanced ledgers, the Paybacks act as superhero repo men and women who foreclose on those who can’t pay their bills. Originally appearing their own comic series, the first two volumes of The Paybacks is being collected into one trade paperback and goes on sale this week from Dark Horse Comics. I recently spoke with co-creator Eliot Rahal about the idea behind the book, the indebted superheroes’ real world parallels, and working with co-creators Donny Cates and Geoff Shaw. 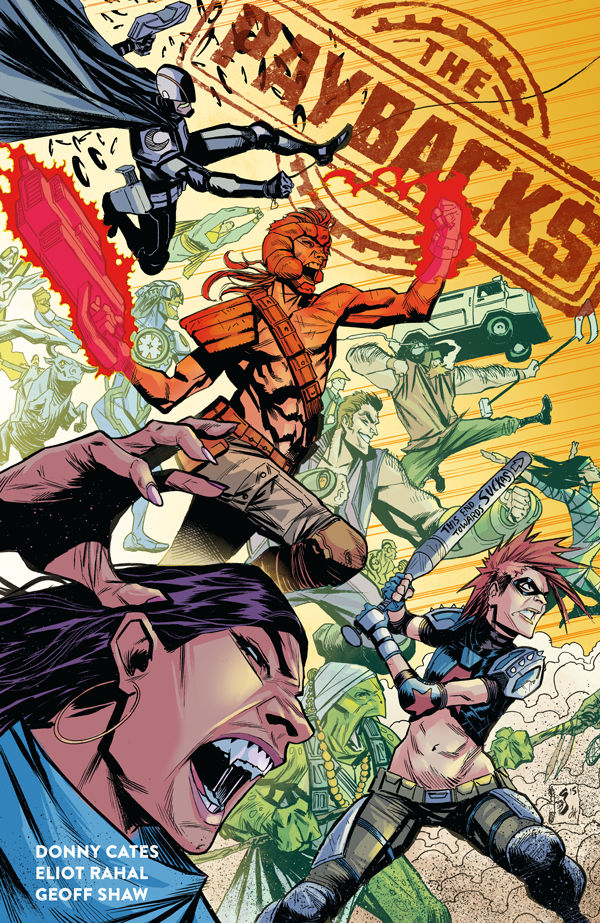 FreakSugar: For folks who haven’t checked out the book before, what is the conceit of The Paybacks?

Eliot Rahal: What if you wanted to be a superhero, but couldn’t afford the Bat-Cave? What if you could take out a loan to buy all the gizmos and gadgets you need to fight crime? What happens if you default on that loan? Meet the Paybacks… the superhero repo team of heroes who are working to pay off their debts. This is a lot more fun to explain when Donny and I present it like vaudeville.

FS: We don’t always get to see superheroes in dire financial straits like we see in the first volume. How did you land on the idea of depicting super-folks struggling in this way?

ER: Like any story. It was just a simple idea at first. Then we just kinda tossed it around. And thought about it. And developed it. We even spent a week in the woods working on a series bible. We also almost murdered each other in those very same woods. Donny and I put a lot of thought and effort into this once we got excited about it. 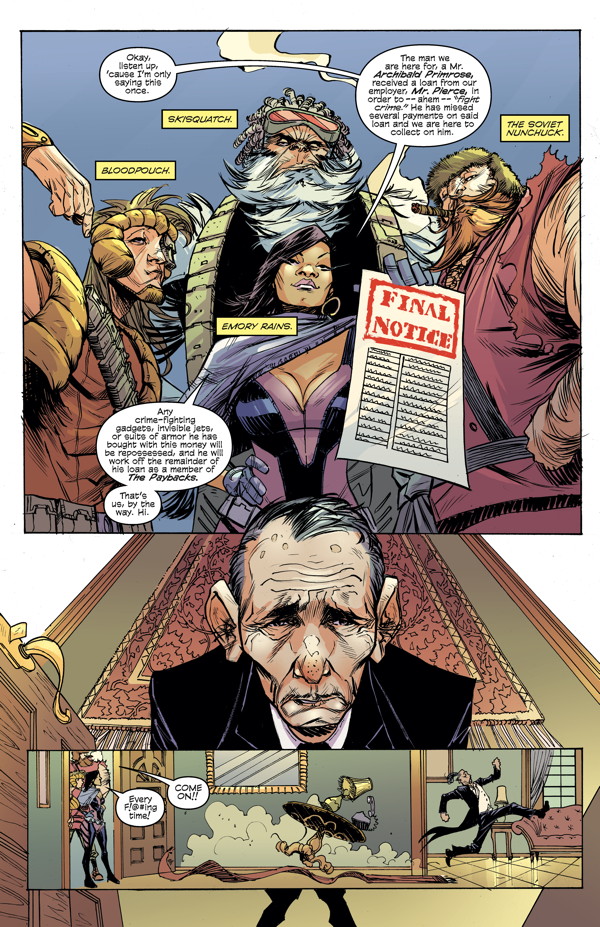 From THE PAYBACKS issue #1

FS: It’s hard not read the story and not think about student loans or other high-cost loans. Were the parallels in the back of your mind when you and Donny created the tale?

ER: No doubt. I mean I racked up a lot of credit card debt after college. Like a lot. And then I got in trouble with the IRS. And I know Donny, at that time, struggled with student loans. My wife is buried in student loans. Everyone we know that’s under the age of 35 has similar issues. It’s unfortunately a very relatable subject.

FS: The dynamism that Geoff Shaw brings to the table in his art is just a site to behold. He’s equally adept at giving the characters soul and personality and building the huge action shots in the book. What was the collaboration process like with Geoff?

ER: Quite simply there is nothing without Geoff. Often times with our scripts, I felt like a child presenting an offering to a true master of his craft. Geoff understands everything about this story — perhaps even more so than Donny and I. Seeing his work come in was a truly thrilling experience.

FS: And speaking of collaborators, Donny was the co-creator of the series. How did that back and forth work with you two? It seems like you two are brimming with big ideas that it would be a blast and a perfect storm of creativity.

ER: Donny and I go back a long time. And we are old friends. I started my publishing career in comics by working from and learning from him. What always made it easy is that we both had a passion for excellence. I know that sounds egotistical. But it’s true. Our goal was to set out and say something. That fuel is what kept The Paybacks going even after it was cancelled. And it’s what brought us back to Dark Horse with this collection. 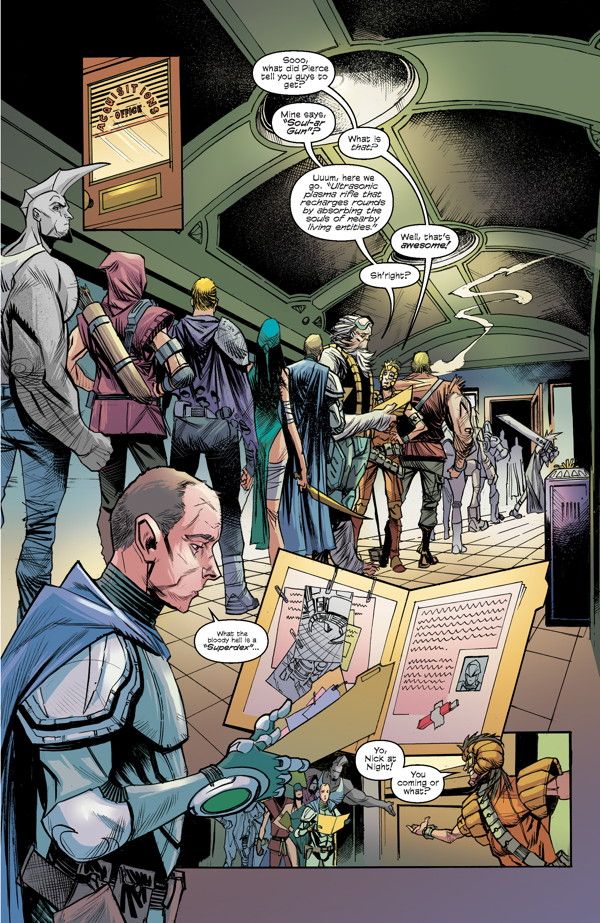 From THE PAYBACKS issue #2

FS: Do you all have any plans to get the band back together to collaborate on more Paybacks stories or other projects down the bend?

ER: The thought has really never occurred to me. I mean. The Paybacks was written a very long time ago. Also. Donny is exclusive at Marvel right now. So that’s kind of a thing. And pretty cool to see. But who knows what the future holds. This book holds a special place in my heart.

The Paybacks trade paperback collection is on sale now from Dark Horse Comics.