We all struggle with belonging at some point or another: in our social group, in life, in the world. At the same time, we grapple with who we are in the various interactions we have with our world. Who are we? What is our identity?

Those questions and more are covered in Eliott Ventadour’s wonderful webcomic UndeadEd, available over at Webtoon. In UndeadEd, Ventadour—who also goes by Boredman—follows the tale of Ed, who, as the title suggests, is undead. The series follows Ed as he attempts to navigate his life, loves, and the world as a member of the undead. And while the series covers all the philosophical questions mentioned above, UndeadEd is also gripping, engaging, and filled with the laughs.

Recently, Boredman, in collaboration with Rocketship Entertainment, launched a Kickstarter campaign to bring the entire digital series to print in UndeadEd: The Graveyard Edition. In addition to securing a beautifully-crafted copy of the story you can hold in your hands, there are a bevy of rewards that can be unlocked through backer patronage.

I spoke with Mr. Ventadour recently about the conceit of UndeadEd, the inspirations behind his work, the Kickstarter itself, and how Kafka’s Metamorphosis played a hand in the creation of the series. 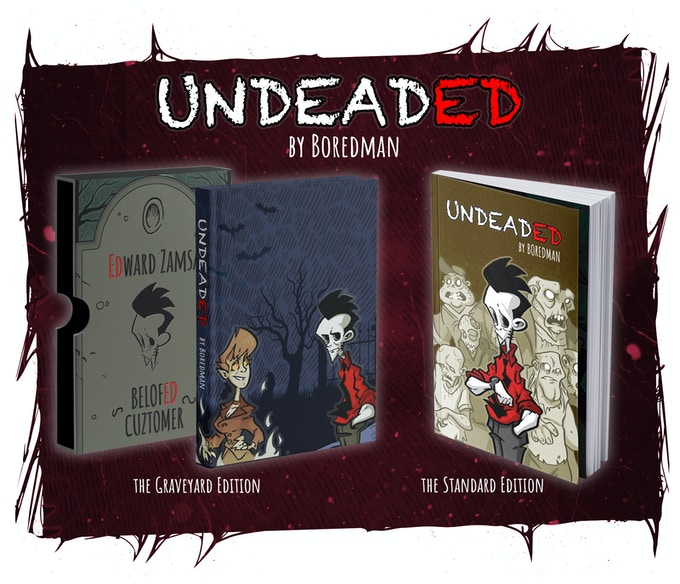 FreakSugar: For folks who might not be familiar with the series, what is the idea behind UndeadEd?

Eliott Ventadour: UndeadEd, as the title cleverly implies, is the story of an undead guy named Ed. He wasn’t born that way, of course, neither does he initially identify as one, but the science is clear. No pulse, no sensation, no reflection, these are all things that can get you labeled pretty quickly. Regardless of his strange condition, Ed is determined to just go on with his life. If one can really call it that, of course.

The whole thing was inspired by a dream I had where I was attending a costume party dressed as a skeleton, and soon realized I really was one and that no one seem to notice or even care. While that later gave me this idea for a kind of retelling of Kafka’s Metamorphosis, it first unleashed a seemingly endless stream of dead guy jokes in my brain that I found myself compelled to lay on paper.

There’s a lot of things I hoped to convey in this comic, of course, but mainly it’s been a way for me to indulge in two of my favorite things in the world: Telling jokes and drawing monsters. 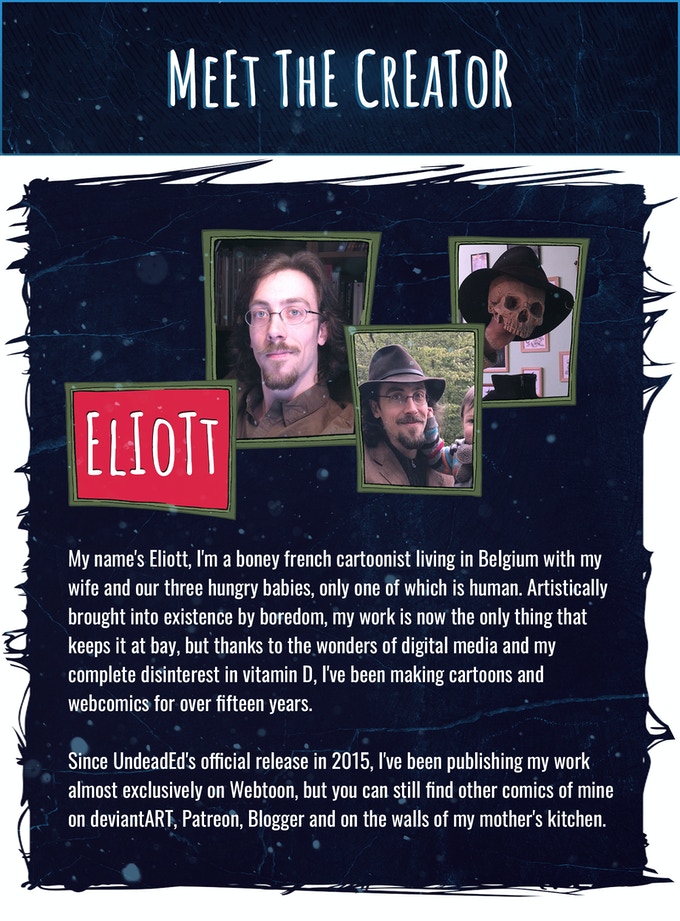 FS: The cast of characters in the comic are so lively (if you’ll pardon the pun) and robust. What can you tell us about the cast?

EV: Much like the rest of us, I felt that Ed’s story could be perceived as both tragic and comic depending in his surroundings, so I figured the best way to offset the morbidity of his situation was to include a lively bunch of monsters and weirdos. And since his situation organically called for it, I was free to bring in all my favorite archetypes from the horror genre.

The only (kind of) originals were Mort the Mortician and Chuck the scientist, and they’re both based on myself. Well, they all are really, but mainly these two.

Also, yes, I will pardon the pun, but you better BACK OFF. That’s my shtick!

FS: The comic is engaging and so entertaining. What are some of your inspirations for the series and your work in general?

EV: Thank you! And let’s just say that, in addition to being a child of the nineties, my birthday’s right around Halloween, so my childhood was littered with monster cartoons and monster parties. Unsurprisingly, I grew up loving vampires and ghosts, which then led me to monster movies and scary literature. They never scared me, of course. It’s people that scare me. People and tight spaces.

But I think the core concept behind UndeadEd originated from me reading Eric Liberge’s “Monsieur Mardi-Gras Descendres” as a teenager. It’s about a dead man turned skeleton, trapped in purgatory and trying to make sense of the afterlife. I only picked it up because I liked skeletons, but it really was an amazing read.

As for my work in general, I’ve been reading comic books since before I could actually read, so there is just too many different inspirations to choose from. No mangas though, I’ve only just found out about those.

FS: UndeadEd seems to pull from different storytelling traditions. How do you approach your work?

EV: In terms of writing, UndeadEd was very obviously inspired by some of the classic American comic strips I read as a child, like Garfield or Calvin and Hobbes. I always enjoyed the format.

There was also this French comedy show from the early 2000s, Kaamelott, that showed me how a series of short jokes could sometimes serve the underlying plot and move things forward, both entertainingly and organically. It felt like such a satisfying way to develop a story, and I always wanted to try it.

But in general, I find the stories I want to tell are always stories I’ve been wanting to hear. They can often be traced back to some other story I read and wanted more of, or simply was disappointed by. I think that’s how most people begin to tell stories, that is, until life gives them some real ones to tell.

FS: The Kickstarter for Undead Ed: The Graveyard Edition has already met its initial goal several times over. Congratulation! What kind of rewards can backers of the campaign expect?

EV: All of the usual goodies, I’d say. Stickers, pins, prints, patches, couple of original drawings from yours truly, and things like shirts as backer rewards are unlocked.

FS: Do you have any other works that you’re currently working on?

EV: Yes, I’m currently working on another Webtoon series called BlackSmith. It’s about a teenage girl whose soul gets trapped by a mysterious spirit inside the body of one infamous pirate captain everyone fears and who just happened to have burned down her village and killed her with bare hands. It’s a pirate story, obviously, complete with ships, cannons, curses and demons. No Johnny Depp though, he never answered my texts for some reason.

FS: Is there any chance that we will one day see the return of UndeadEd?

EV: Well, spoiler alert, but Ed did return (if only briefly) in Apocalyptic Horseplay, another Webtoon series of mine set in the same universe, which ended a couple years ago. However, if you’re asking me whether or not UndeadEd will have an actual sequel, I really have no plan for it at the moment. I kind of killed the main character off after all (again, spoiler alert), but I’ll admit, if I ever find myself with another story to tell with these characters, I don’t suppose that’ll really stop me.

FS: If you had one last pitch for the comic or the campaign, what would it be?

EV: While the main attraction might always be the monsters and the dark humor, UndeadEd is also about coming to terms with change, about identity and being estranged to ourselves, and most of all about our need to belong, especially when we no longer know WHERE we belong.

In my mind, UndeadEd was always meant to be a book. In fact, the pages you’ll find in that book are in the actual format I used to draw these strips in the first place, and with our initial campaign goal having been reached in less than 24 FREAKIN’ HOURS, it’s already becoming a reality. So, if you too like monsters, dark humor, smooth paper and pretty pins, I strongly suggest you stop by our Kickstarter page and get your long-awaited copy of Ed’s adventures and search for answers.

You might also want to check out Apocalyptic Horseplay afterwards. You may find some familiar faces.

As of press time, the Kickstarter for UndeadEd: The Graveyard Edition has met its initial goal almost FOUR TIMES OVER! Click here to learn all about the book and the fantabulous backer rewards available!