Monsters lurk everywhere—not just the supernatural monsters of myth and legend and folklore, but the human monsters that let hate and ignorance mar their hearts. And that’s especially on display in the racist rhetoric that slinks in the shadows or manifests itself outright across America every single day.

Writer Eric M. Esquivel has taken those two types of horror and combined them in his new DC Comics/Vertigo Comics series Border Town, debuting this week. In Border Town, teenager Frank Dominguez moves to the fictional Arizona border town of Devil’s Fork where, unbeknownst to him and his new fellow townsfolk, is being overrun with creature from Mexican folklore. Esquivel uses his love of horror and nimbleness with plotting and dialogue to bring a tale that’s unnerving on multiple fronts.

I spoke with Mr. Esquivel recently about the idea behind Border Town, how the real world basis make the horror elements even scarier, working with artist Ramon Villalobos, and what he want messages he wants readers to glean from the book. 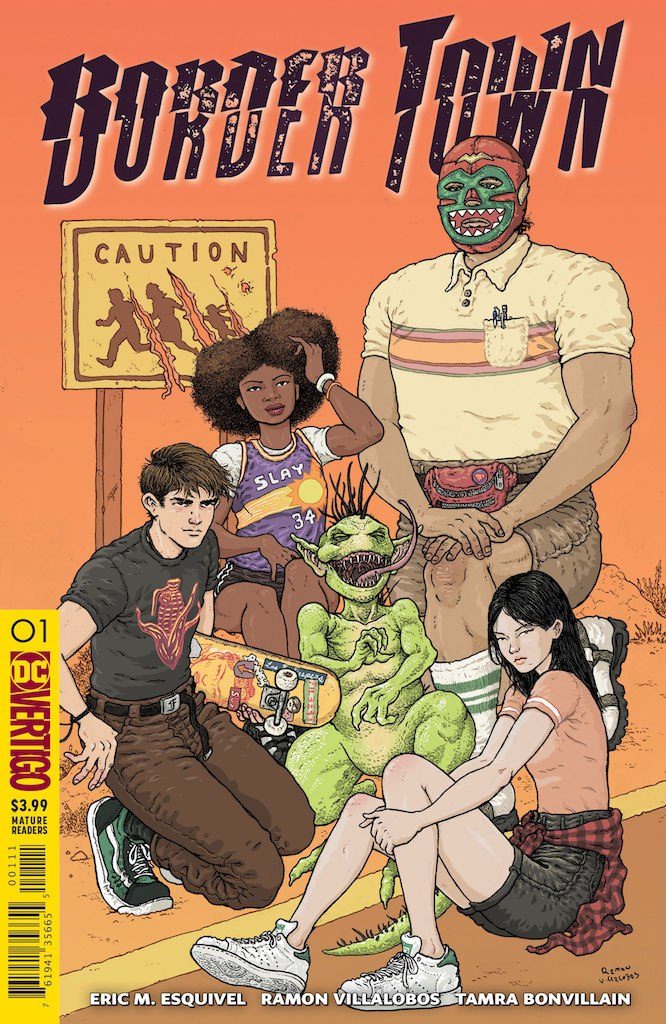 FreakSugar: For folks who considering picking up the series, what can you tell us about the conceit of Border Town?

Eric M. Esquivel: There’s a town in Arizona called Devil’s Fork on the border of the United States and Mexico, but it’s also border between our world and the Aztec Hell. So, all the Mexican folklore you’ve heard of comes from this hell. The creatures are invading Devil’s Fork and exacerbating the human problems already there. It’s a socially tense town. 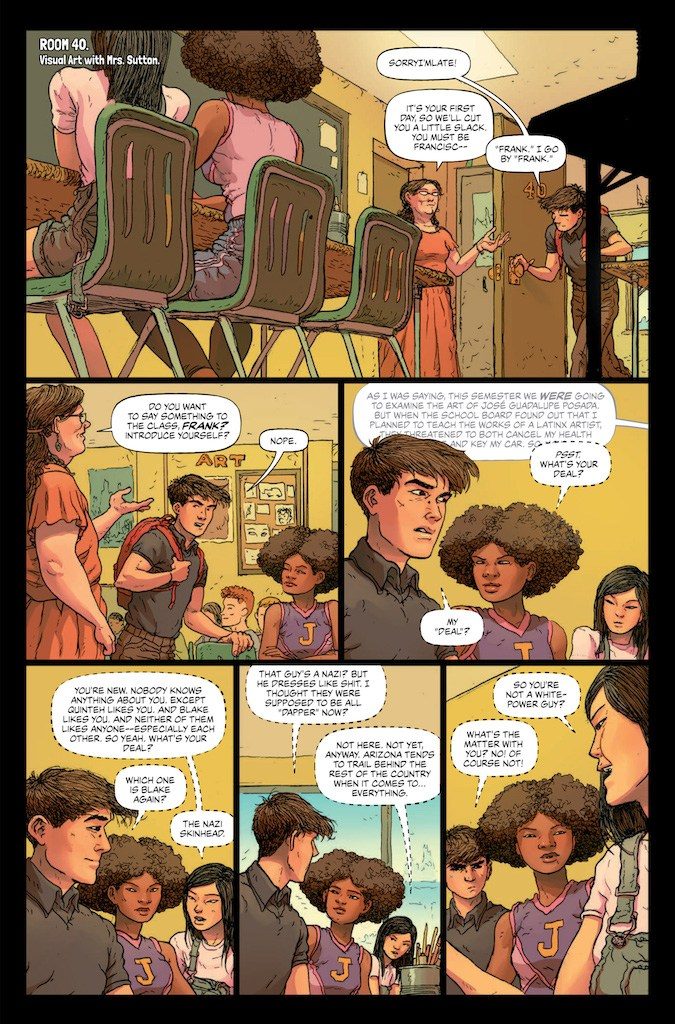 FS: So they’re magnifying the racism and negative feelings already there.

EME: Exactly. It’s a town that’s kind of racially segregated between Mexican and Black and White people living there. The book follows Frank Dominguez, who just moved to Devil’s Fork and is going to the local high school. He’s half-Mexican and half-Irish, which is my identity, too. He’s a character that lives on the border in terms of his identity. So, when he gets to town, he can already see everyone’s different perspectives. He follows a group of biracial kids like him: African American teenagers and Japanese and Latino, people who don’t fit anywhere. He sees the town with fresh eyes. 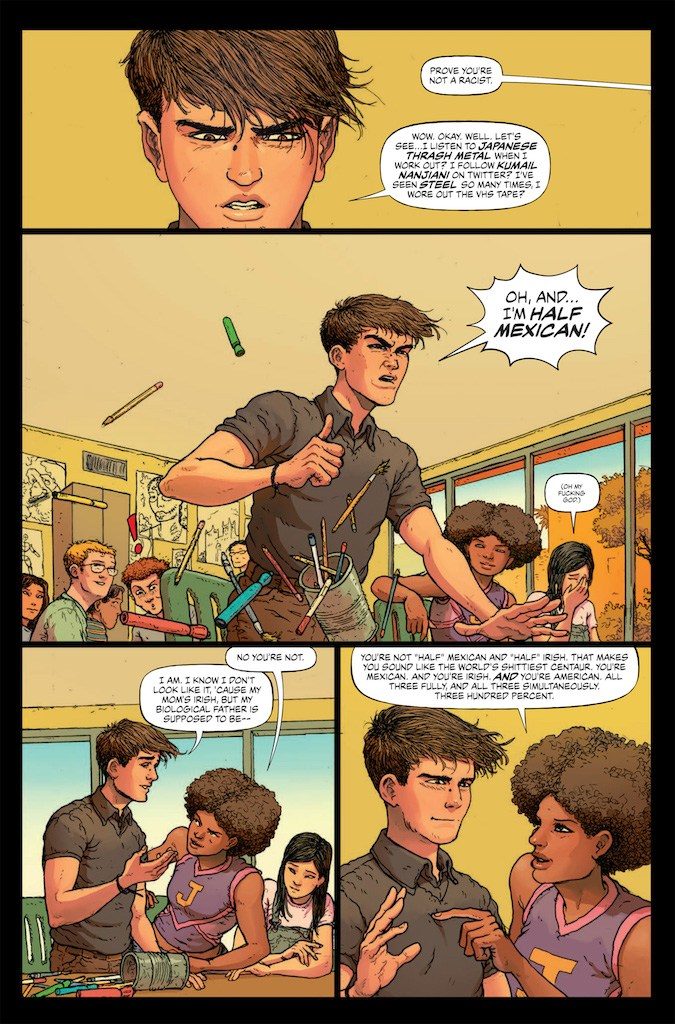 FS: How did you land on the focus of the book?

EME: First and foremost, it’s a horror story and about characters I learned about growing up from Mexican folklore and stories my aunts and cousins would tell to freak me out when I was a kid. I’m a big horror fan and in horror you see vampires and werewolves over and over and over again. In order to use these characters from Mexican folklore, the story has to be set in America and I wanted it to be set on border of the United States and Mexico.

My experience was that I grew up in Illinois and moved to Tucson, Arizona my sophomore year of high school and it was a huge culture shock. My ethnicity influenced the lunch table I sat at in Tucson. It was very, very intense. That’s why combing the supernatural with real world stuff made this book even scarier to me.

FS: I read that you’re unfortunately getting death threats over this book.

EME: I’ve been pitching the story for years and it’s been really hard to find a publisher just because it’s about Latino characters and for some reason just being Latino in America is political which I don’t agree with. So when the idea behind the book came out and the cover art came out showing characters that are racially diverse, there were people who hated that on principle. There’s no way to win them over. Nothing you can do about that. It’s bad as an American to have other Americans hate you for no reason, but it is what it is. 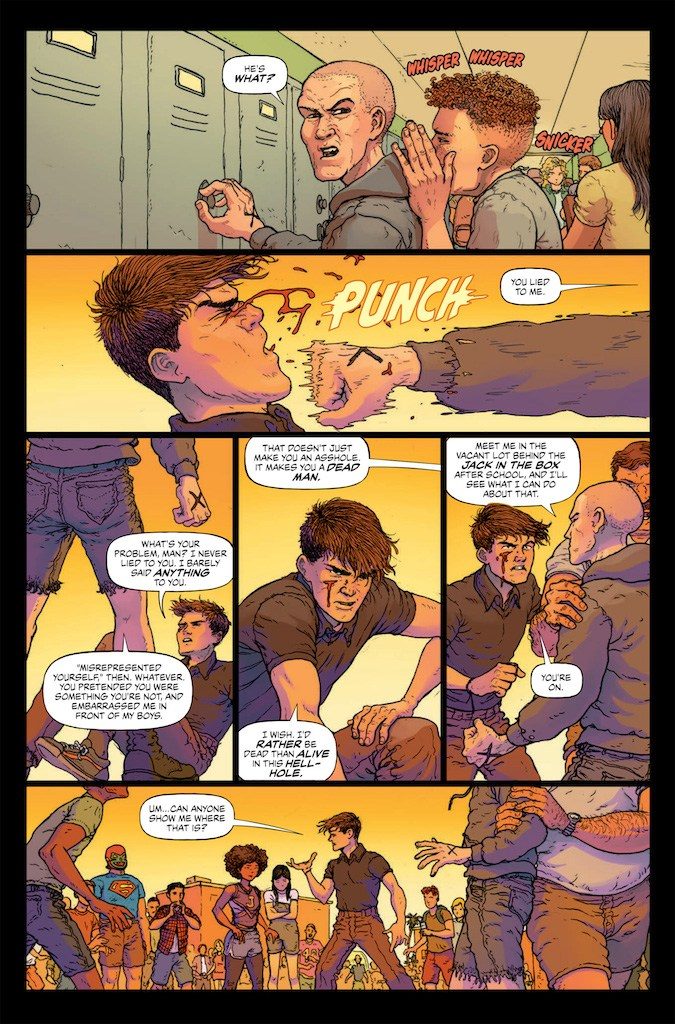 FS: The art of the book is a beautiful blend of real world and supernatural intensity. What’s the collaboration process like with Ramon Villalobos?

EME: I’m a huge Ramon fan. About three years ago, I was doing all-ages and independent comics and met Ramon at a convention and told him I wanted to work with him some day. He just stared at me. Don’t think he believed me. [laughs] So when the book picked up by Vertigo, the editors and I agreed that Ramon is the only one who would be able to do it. Ramon draws the most realistic teenagers I’ve ever seen. He draws fashion in a way that makes them look like they exist in the real work. And then draws crazy black metal monsters—it just makes it scarier. I buy the world already, but you add that horror element and it pops even more.

FS: That’s something I really appreciate about the book: the teens aren’t cookie cutter. They aren’t the same height and weight. That and the dialogue make the whole experience feel that much more real.

EME: Part of the reason the characters feel true-to-life is that they are amalgamations of people I know. I had to get my friends’ permission; two or three people I know. I used some real-life anecdotes in the book, too. 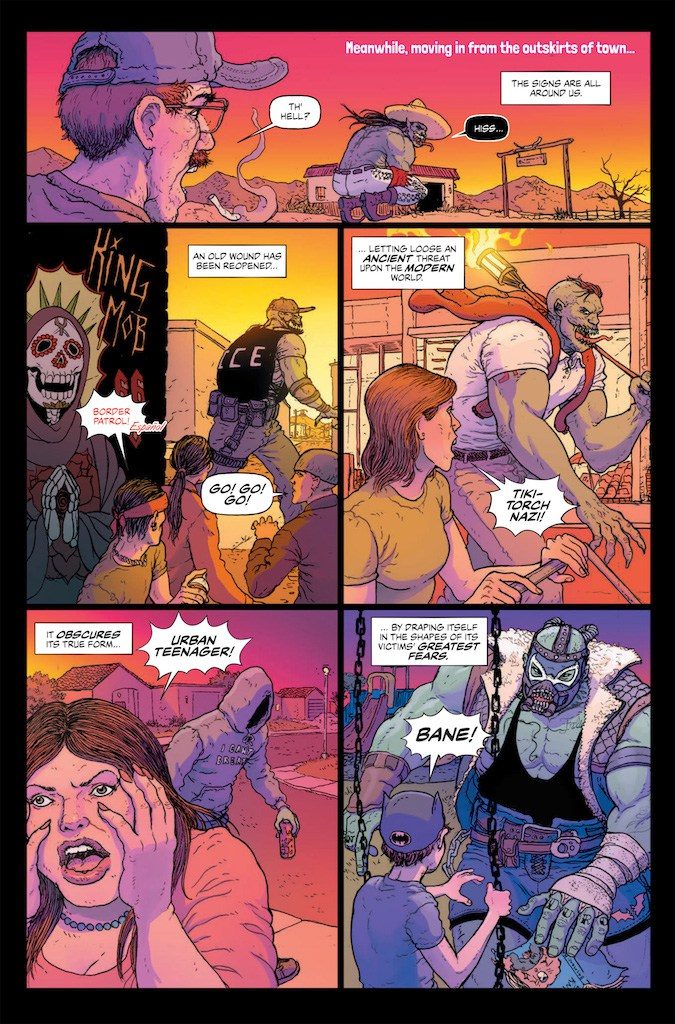 FS: Besides being entertained, what is a takeaway you want reader to have from Border Town?

EME: The book is about people tearing each other’s throats and being so angry at one another that they can’t see the real threats in the world. It’s set in a town where everyone if fighting amongst each other and monsters are taking advantage of that and feeding off that violence. I want people to read it and think about the community that we have not only in comics but the country as well. The only way we’re going to survive the future is if we band together despite our differences. There are real monsters out there that want to see us fall. And they aren’t comic book villains. There are actual, real threats. We need to band together.

I’m an American dude who’s half-Irish and half-Mexican. There are Mexican fans who are mad because I am telling a story about Mexicans because how dare I? And there are people who aren’t Latino that are mad that I’m telling a story about being American because how dare I? I’m Chicano, so that’s a third thing. It’s not like G.I. Joe where your identity is one thing. In America, we’re made of different parts. It’s fun having characters in a comic that are biracial or tri-racial and kind of for the first time.

When a crack in the border between worlds releases an army of monsters from Mexican folklore, the residents of Devil’s Fork, AZ, blame the ensuing weirdness—the shared nightmares, the otherworldly radio transmissions, the mysterious goat mutilations—on “God-dang illegals.” With racial tensions supernaturally charged, it’s up to new kid in town Frank Dominguez and a motley crew of high school misfits to discover what’s really going on in this town torn between worlds.