The Ghostbusters extended universe of characters is experiencing a Renaissance over at IDW Publishing, producing a whole bevy of Ghostbusters comics that both respect the movies, cartoons, and other stories that have come before, while expanding the mythology in new and novel ways.

With the franchise celebrating its 35th anniversary next year, now is the perfect time to go big with these characters, which writer Erik Burnham aims to do by utilizing every. Ghostbuster. EVER with the new miniseries Ghostbusters: Crossing Over, which just kicked off this month. In Crossing Over, a mishap while building interdimensional portal technology unleashes every ghost the ‘busters have ever captured, so it’s up to every iteration of the team we’ve seen to right that wrong.

We spoke with Mr. Burnham recently right before the Ghostbusters 2018 Annual hit newsstands, which sets up Crossing Over, touching on the annual, the appeal of writing the ghostbustin’ gang, and what he could tease about the miniseries. 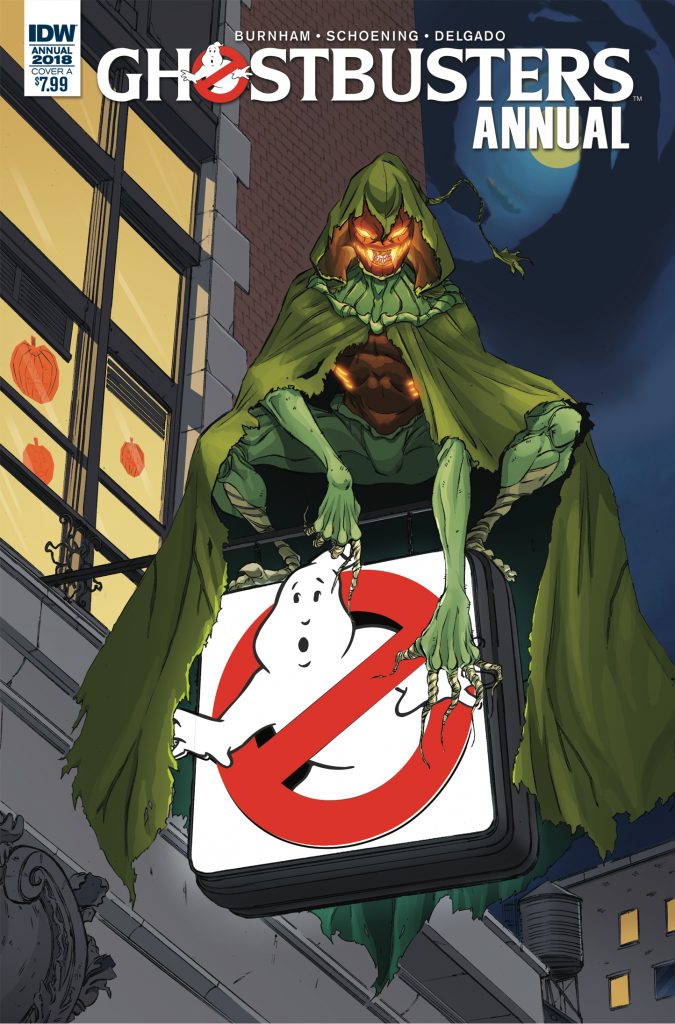 FreakSugar: For folks coming in on the Ghostbusters 2018 Annual, where do we find the crew and their world at the beginning of the issue?

Erik Burnham: At the beginning of the annual, something strange is in the neighborhood… or, rather, the nearly 50-year-old construction project that is New York’s Water Tunnel no. 3. One of the tunnellers discovers something that shouldn’t be 50 stories underground, and of course it requires the attention of the Ghostbusters. As far as it goes for them, it’s just another day on the job.

FS: Following up on that, the state of the veil between our world and the spirit world is thinning to a concerning degree. While Egon and the gang are sharp, do they grasp just how in danger they are?

EB: They routinely deal with the supernatural — they know they’re in a dangerous line of work. But no matter how vigilant or how ready anyone is, trouble always blindsides you. 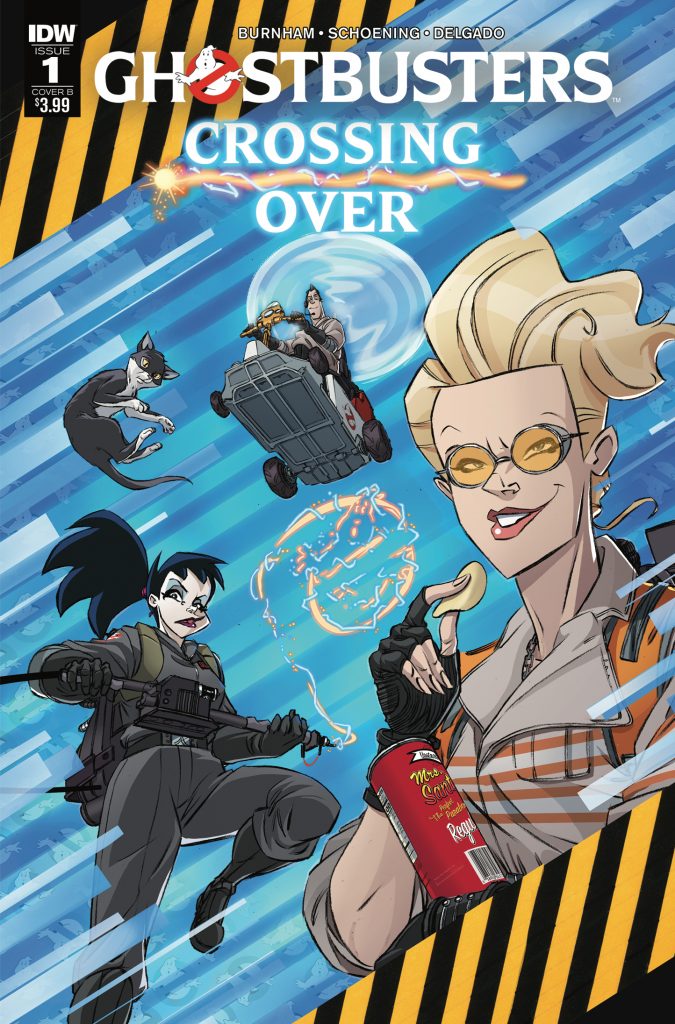 EB: I bum around the internet, the library, the bookstore when my small town still had one (man, that wound is fresh) and fill in any gaps I have in the bones of the story… which sometimes causes an overhaul. With our first annual, a couple of years ago, I threw out almost 20 pages of script because better ideas occurred.

As far as Samhain — I had written the Tobin’s Spirit Guide for Insight Editions, where I had to come up with backstories for the various notable ghosts of the franchise, most of which were from the cartoon, that would fit in with the tone of the films. Samhain was one of the ones that got tweaked, and those tweaks led to questions that dictated the research I did.

And y’know, he almost wasn’t the threat for the annual! I knew what I wanted the final scene to be and considered, for that reason, using Cathulu (the differently-spelled Cthulu stand in that had appeared in The Real Ghostbusters). 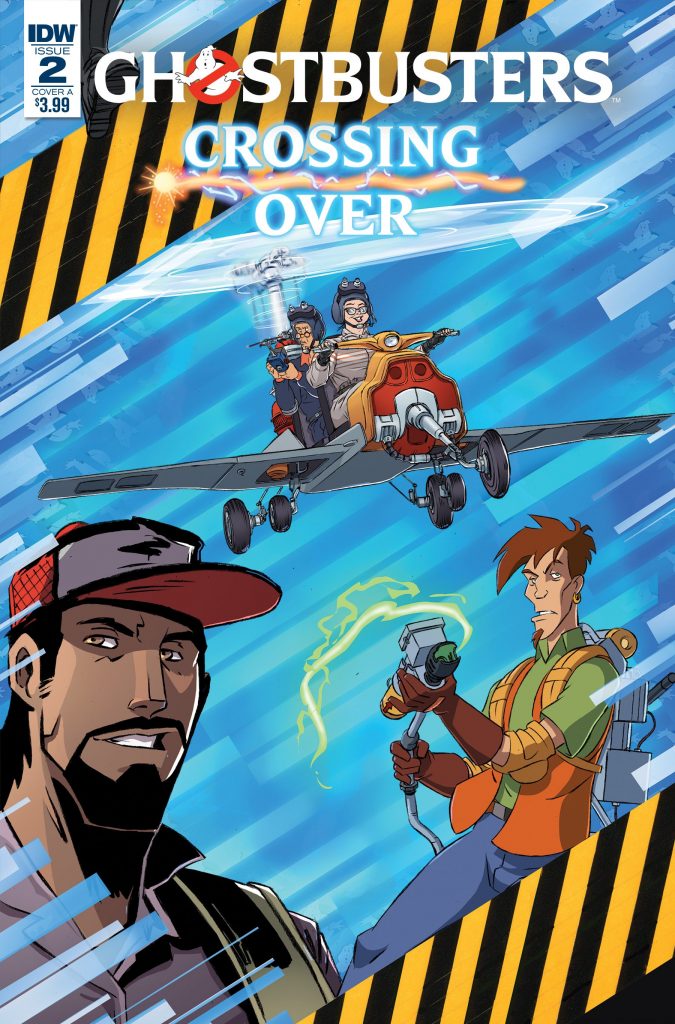 FS: The world of the Ghostbusters has evolved and expanded greatly since that first 1980s movie. What’s been your favorite part of playing in that sandbox?

EB: I am fully aware that this is a cop out answer, but all of it. I like doing the humor, I love working with supernatural concepts, I enjoy using the unique tools of this franchise, and working with Dan Schoening, Luis Delgado, and Tom Waltz, who all escalate the fun of those tools.

FS: You’ve been writing Ghostbusters yarns for a while now. What keeps you coming back revisiting that world again and again?

EB: Ghostbusters has been one of my favorite things since the first time I saw the first film, and I truly just  love the attitude and personality of the characters. I also like visiting a world where scary things can be confronted with humor and reason and then be overcome. The world we all actually live in isn’t quite there yet. 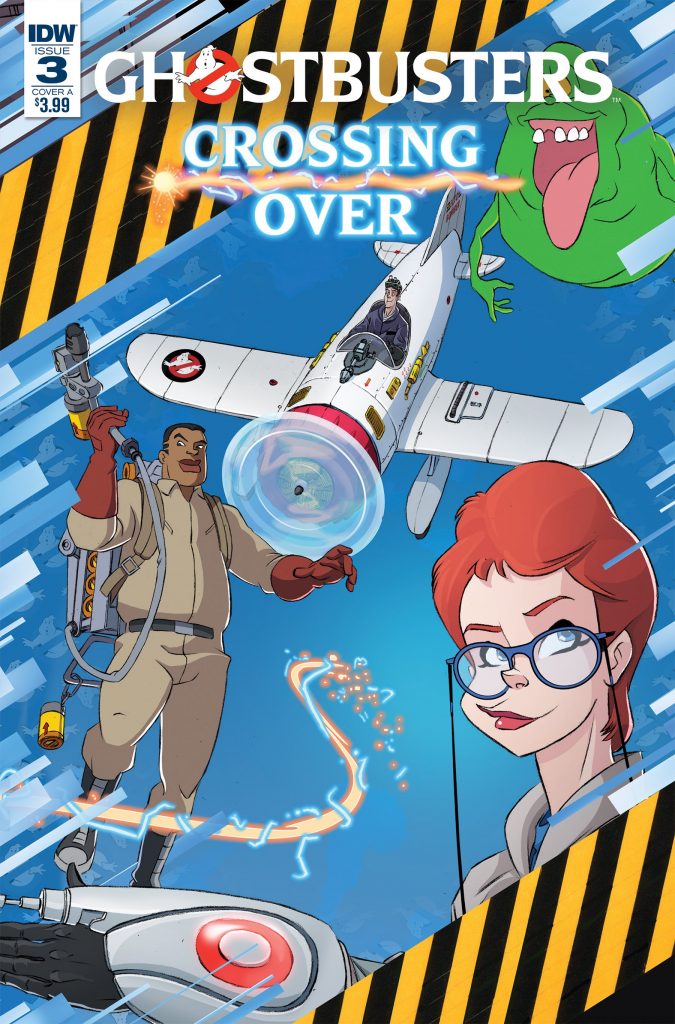 You inject a ton of humor and personality into the characters, balancing the funny with the pathos. Besides the Ghostbusters films, are there any influences in movies or books that inform how you approach the comics?

EB: I need to figure out a pretentious answer for questions like this. I suppose saying “life influences me” is pretentious enough, but it’s also true. I listen a lot to the voices in my head that were shaped in weird ways by watching the world around me. And that whole wave of comedies from the 70s on up where Second City kind of conquers Hollywood — that’s a big influence, clearly, and It’s all in service of getting the voice of the material right. That’s my primary job.

I’m getting a little better at the pretentiousness, as you can see.

FS: Throughout the course of your Ghostbusters tales, you’ve added a whole host of new concepts and ideas. Are there any in particular that you’re proud of?

EB: Man, I’m proud of so much. We’ve added characters that fans have cosplayed as and made custom figures of, characters that people miss when they’re absent for a while. That’s not something I take for granted.

But I’m also glad to have established Egon’s love of grenades. I don’t know why I find that as funny as I do, but it’s gratifying to see the fans have taken to it.

FS: The end of the annual sets up the next story arc, which features SO MANY GHOSTBUSTERS across dimensions. Is there anything you can tease going forward?

EB: Well, every Ghostbuster we can use that has strapped on a proton pack will be there in some capacity, so yeah, “many” is an understatement! At first the story was just going to be a mix and match of the Busters heading off to recapture ghosts who had escaped from the containment unit (and yes, Egon has a babbly explanation for why this needs to be done.)

But then I started thinking of other ways to play with it and give it some personal stakes. I thought of two things that would give it the right heft, and how they would affect things emotionally. That revelation comes on page 20 of issue 3. Cannot wait for longtime readers to see it!

From the official issue description of Ghostbusters 2018 Annual:

When urban miners discover what appears to be a centuries-old, man-made chamber 600 feet below the streets of New York City, they unwittingly unleash an unnamed entity with designs on dominance… an entity that will soon answer to the name SAMHAIN. Join the original Ghostbusters in this double-sized annual that will also sow the seeds for Crossing Over!

And the description of Ghostbusters: Crossing Over #1:

For a while now, the original Ghostbusters have had access to an interdimensional portal that has given them all-new ways to research the paranormal and consult with Ghostbusters throughout the multiverse… but they haven’t shared this tech with any of those other Ghostbusters, and some don’t think that’s fair. That’s why, after a chance meeting, Jillian Holtzmann and Ron Alexander have decided to right this wrong and cobble together their own working portal… which unintentionally unleashes the contents of the Ghostbusters’ Containment Unit! That’s a lot of ghosts, and it’s going to take a lot of Ghostbusters to recapture them. In fact, it’s going to take ALL of them. “Crossing Over” starts here!