Author John Carlin–author of the book that would eventually be adapted into the movie Invictus–has revisited the life of Nelson Mandela, along with artist Oriol Malet, in Plough Publishing House’s Mandela and the General, which was released last week on Election Day. The graphic novel chronicles the relationship between Mandela and the former chief of South Africa’s military and how they put aside their differences and trust one another for the greater good of South Africa.

In addition to Mandela and the General, Plough is going forward with a mission to produce a series of inspirational graphic novels. In the essay below exclusive to FreakSugar, Plough editor Sam Hine speaks to that mission as well as Carlin and Malet’s comic.

Want to learn more about Mandela and the General? Be sure to check out pages from the graphic novel at the end of Mr. Hine’s essay.

What’s Next for the Graphic Novel?

Graphic novels are being taken more seriously than ever. Nick Drnaso’s Sabrina made the Man Booker Prize longlist this summer. Next year, Scholastic is planning a whopping 1-million-copy first printing for a middle-grade graphic memoir by Raina Telgemeier. In an age of screens, with communication becoming increasingly visual, forward-looking publishers are getting on board fast.

As acquisitions editor at Plough, an independent, nonprofit, mission-driven publisher, I’m never looking to turn a quick profit by jumping on the next bandwagon. (No, we didn’t publish a single adult coloring book.) We select books exclusively for their message and their ability to reach people who might otherwise not contemplate new ideas. But for these very reasons, I am banking on the graphic novel, and see a lot of opportunity for smaller, specialized publishers like Plough to take this genre in exiting new directions. To put it plainly, it’s often a better way to tell a story.

For example, Plough is carving out a niche by bringing serious historical nonfiction to the graphic novel format. Our graphic biography of Martin Luther, timed for the 500th anniversary of the Reformation, won two book awards. Far more rewarding for me, though, was to see my own teenagers, who prefer sports and films, engrossed for close to an hour in a book about the history of religion. We’ve commissioned a graphic novel about student resistance to Hitler, and one about social radicals during the Reformation.

We’re also planning some graphic novel adaptations of classic literature, and an anthology of graphic interpretations of great poems. And as a publisher with international roots, we’ll be leveraging those connections to bring more global perspectives and talent to US shelves.

With Mandela and the General, (November 5) Plough is breaking other new ground. By teaming up with John Carlin, a top British foreign correspondent, and Catalan artist Oriol Malet, we’re proposing that the graphic format is also appropriate for world-class journalism. The book is about a specific recent historical moment—the triumph of the nonviolent struggle against structural racism in South Africa—but the imagery makes a clear connection to Black Lives Matter and the crisis in American cities today. It’s a true story about the power of diplomacy—how understanding your enemies, appealing to their humanity, and winning their respect is always more effective than partisan bluster. (In today’s political climate, what could be more timely?) In a similar vein, the National Book Award–winning March trilogy by Rep. John Lewis and Andrew Ayden introduces the civil rights movement to a new generation that missed the action, while making it clear there are still battles to be won today. Meanwhile other authors and publishers are tackling immigration, war, bullying, environmental degradation, and the refugee crisis.

I still run into skeptics, but the evidence bears out my hunch, with Publishers Weekly reporting 24 percent growth in graphic novel sales in the last five years. With print competing against an array of digital media, this is proving one place where paper can still deliver a more rewarding experience than the small screen. Of course, the existential threat that online entertainment poses to the physical book has had positive effects far beyond the graphic novel genre; across the board publishers are paying more attention to graphic design and visuals. A few years ago I wouldn’t have considered using color photography in a poetry collection like Water at the Roots or a book on current events such as The Last Christians. Today, with every new book, we are asking what we can do design-wise to set it apart.

Particularly for anyone raised on comics, graphic novels are a natural bridge into the world of books and ideas, that limitless world of lifelong learning and exploration. It’s one small leap for humankind: from a fantasy world of flying superheroes to an equally dramatic real world of flesh-and-blood heroes in whose footsteps we can actually follow. 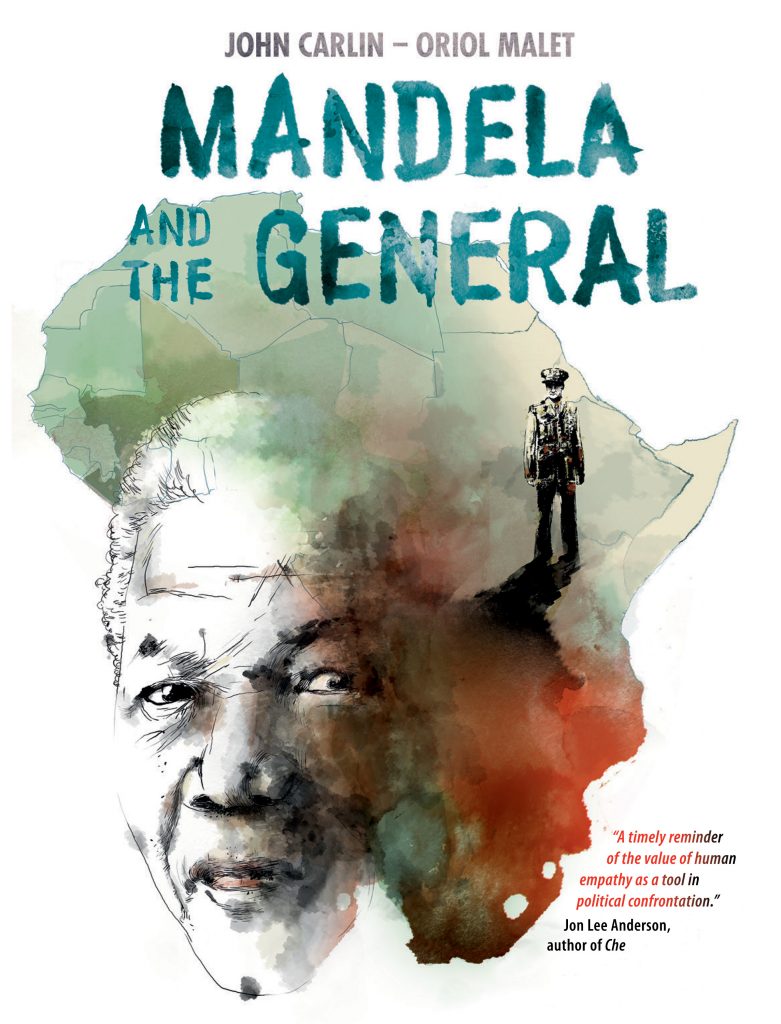 MANDELA AND THE GENERAL cover 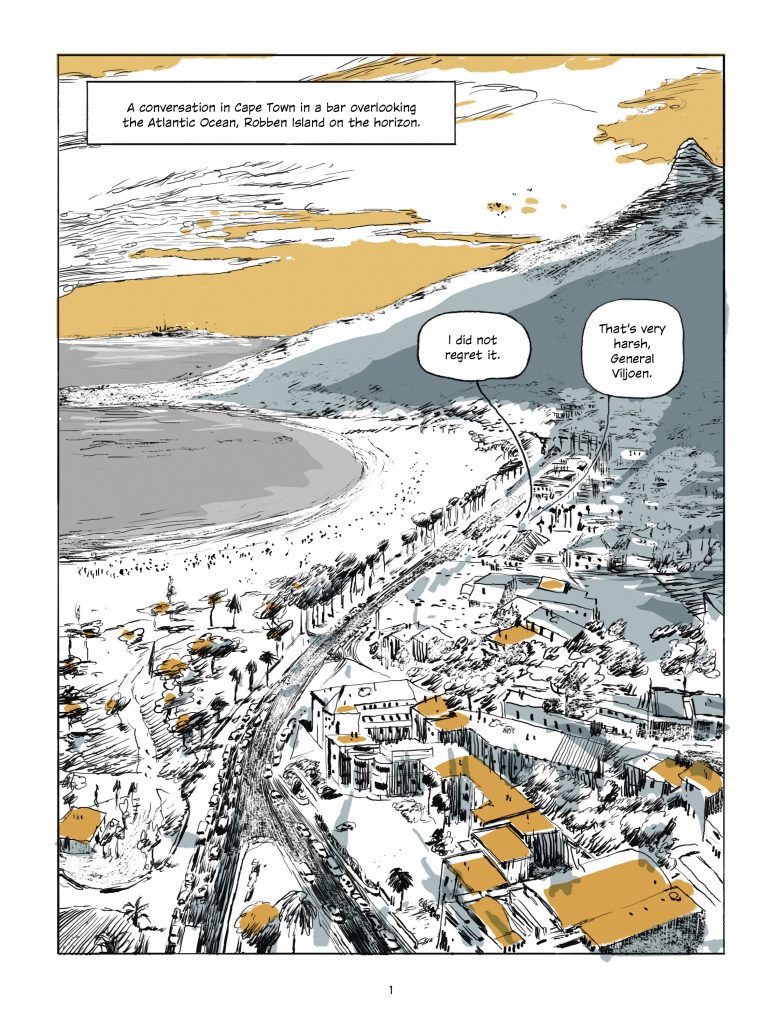 MANDELA AND THE GENERAL page 1 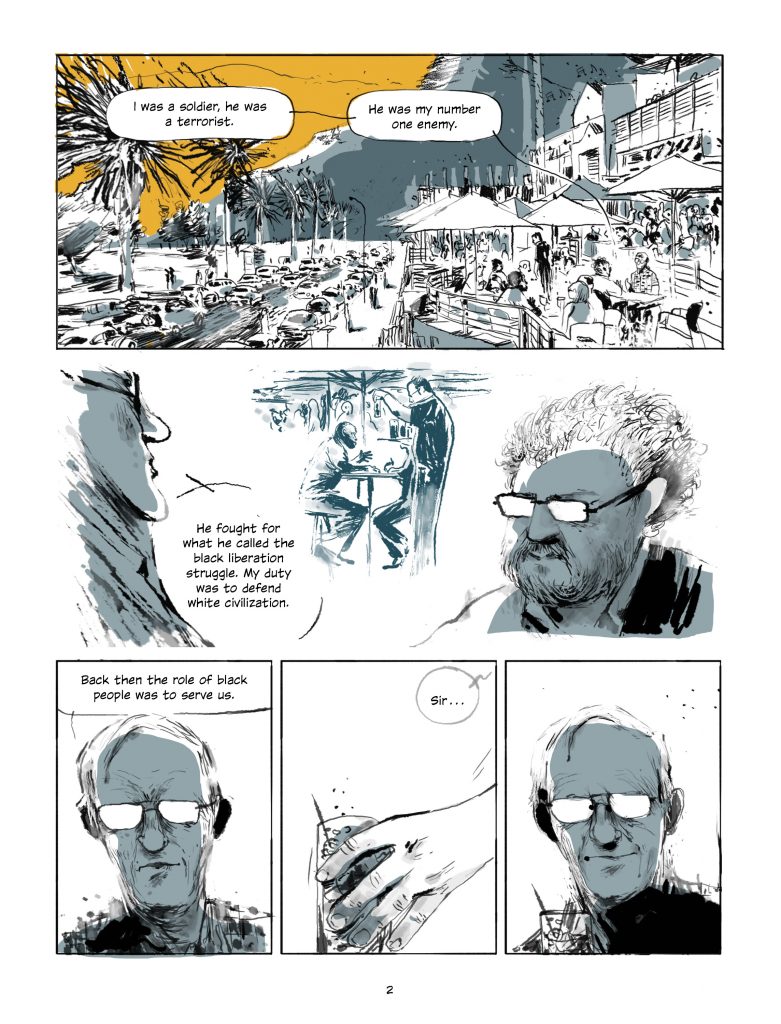 MANDELA AND THE GENERAL page 2 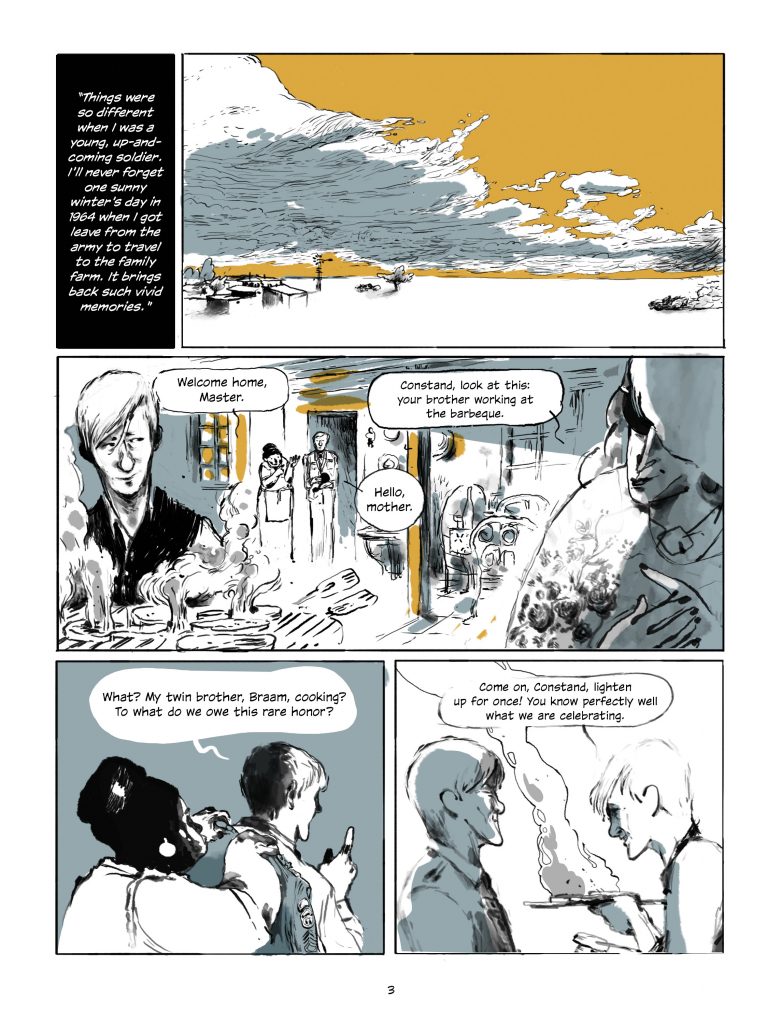 MA3DELA AND THE GENERAL page 3 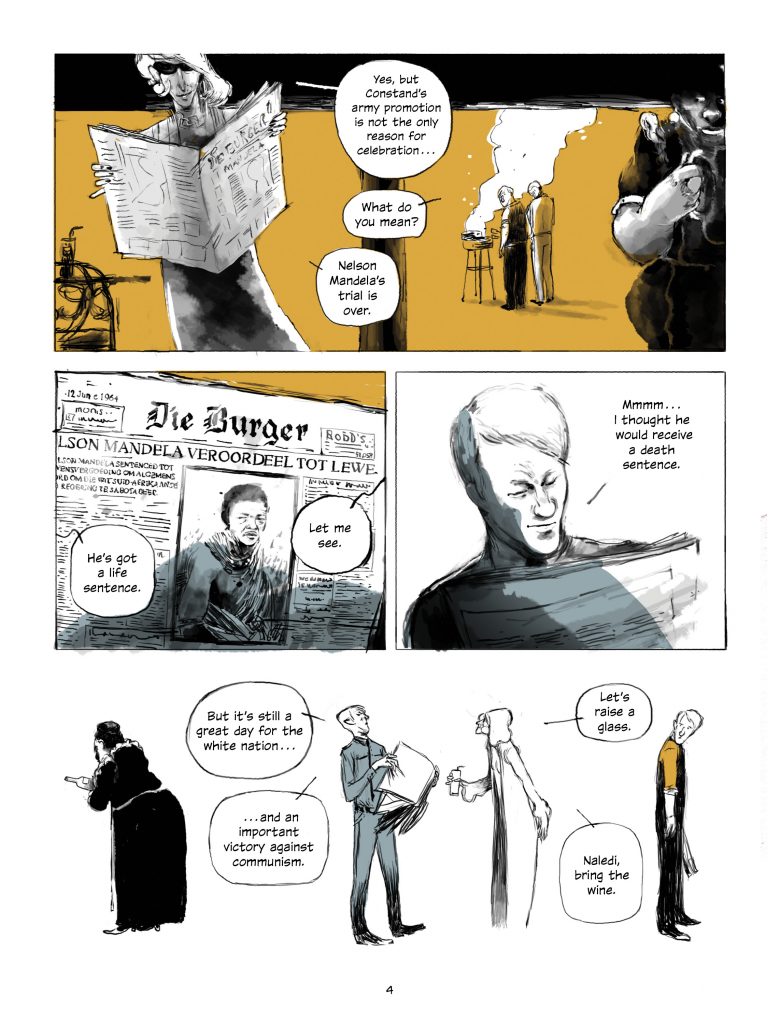 MANDELA AND THE GENERAL page 4 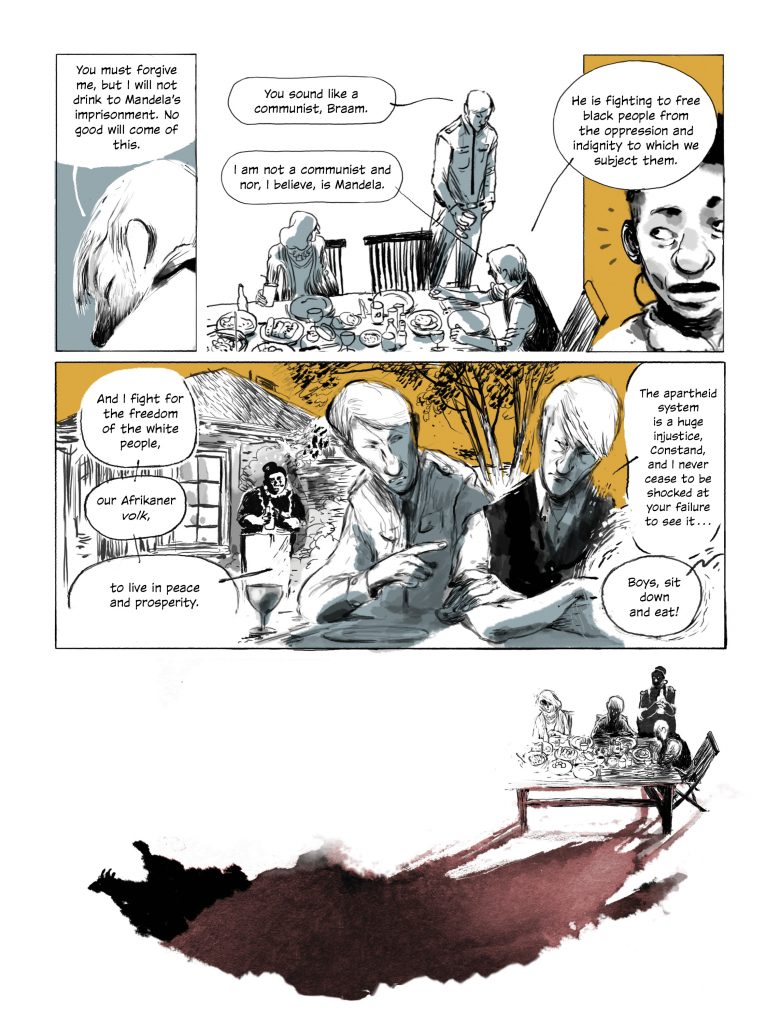 MANDELA AND THE GENERAL page 5 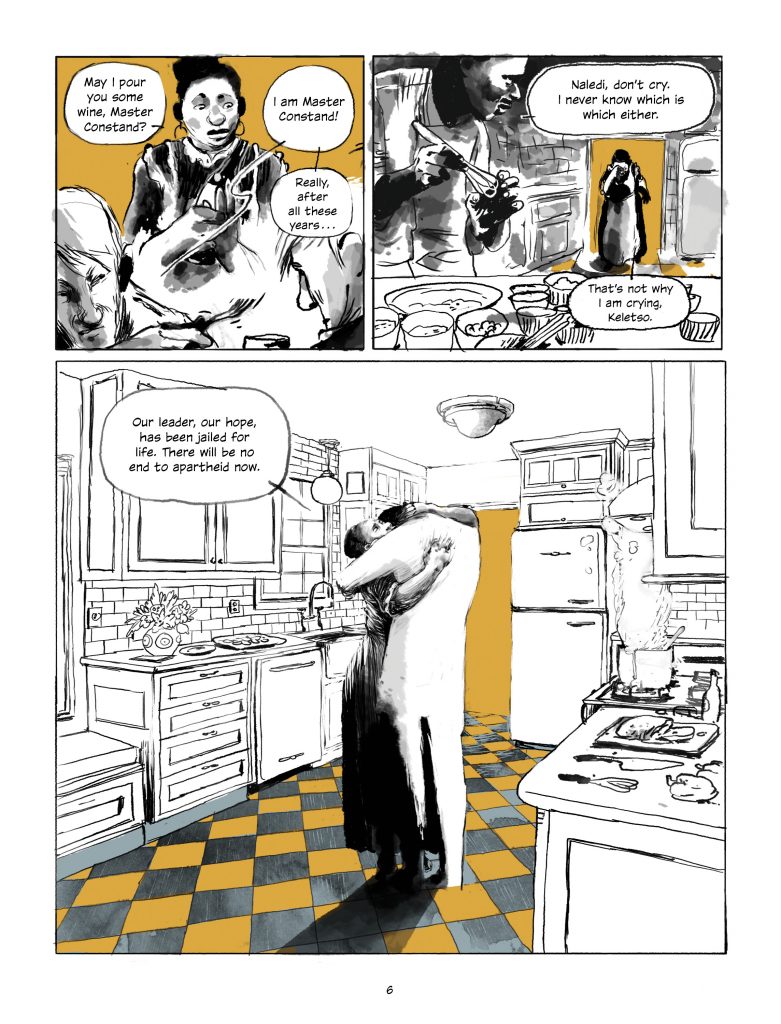 MANDELA AND THE GENERAL page 6 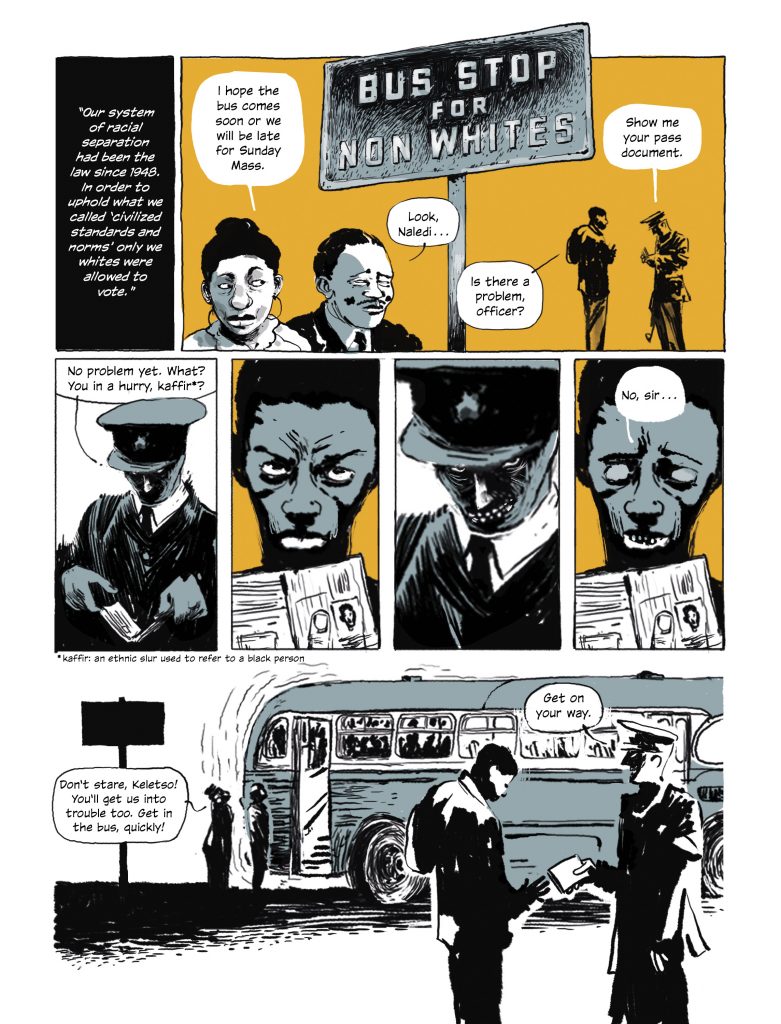 MANDELA AND THE GENERAL page 7 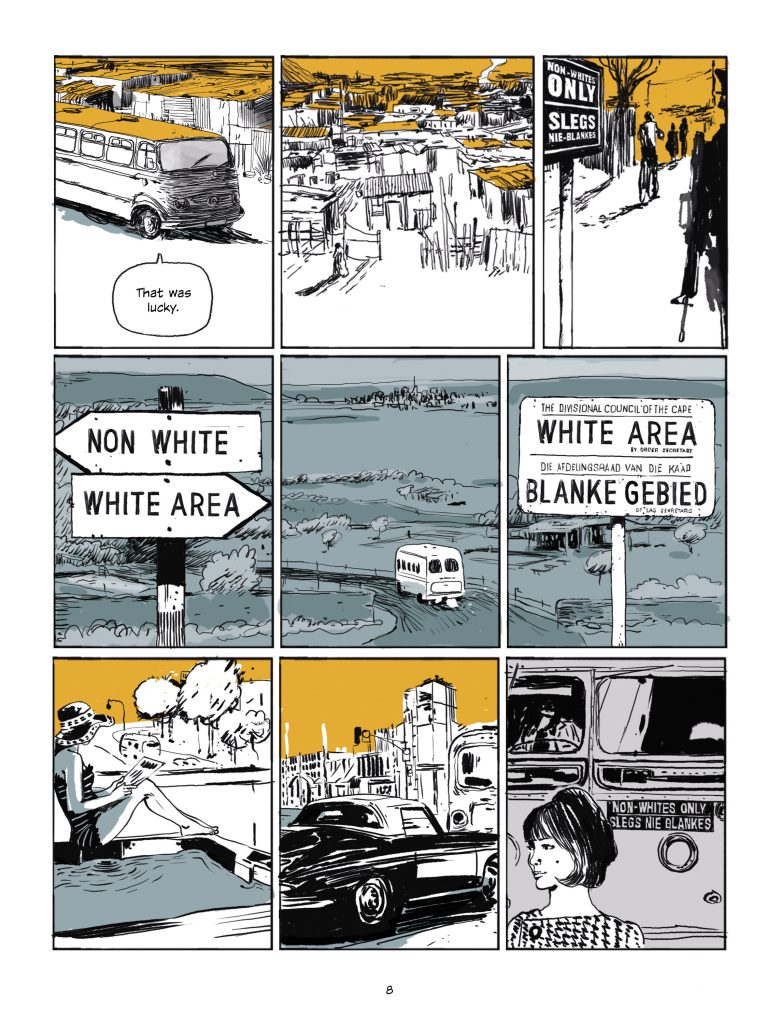 MANDELA AND THE GENERAL page 8