This Wednesday, April 19th, the Shaolin Cowboy rambles back on the scene in The Shaolin Cowboy: Who’ll Stop the Reign? #1, with more than plenty madcap death and destruction lying in his wake, and fans are all the better for it. Ahead of the series’ much anticipated release, we have an exclusive look at the cover for the title’s hardcover. Feast for eyes on this piece of beauty! 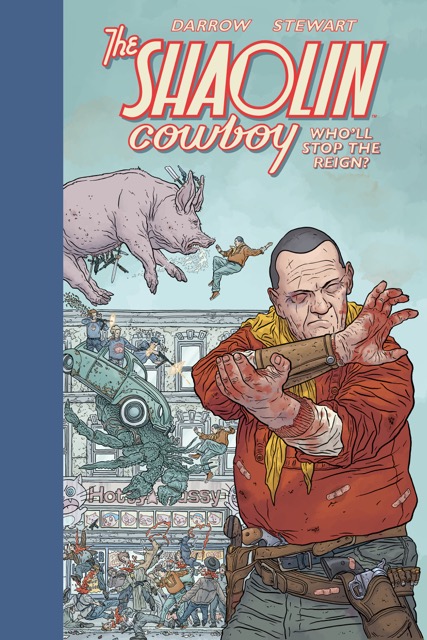 We’ve missed your inscrutable, sometimes-sour face, SC. Welcome back! And is that a giant pig in the background? What comic doesn’t need a giant pig causing mischief? Madness and chaotic action are some of the hallmarks of entertaining comic book yarns, and Darrow is a master of both.

Also, check back with us Monday for the full interview with creator Geof Darrow about everything from the themes running through The Shaolin Cowboy stories to his work with Hanna-Barbera and drawing Scooby-Doo in drag. Here’s a taste of what to expect:

FreakSugar: What’s the genesis behind The Shaolin Cowboy: Who’ll Stop the Reign?

Geof Darrow: I like the idea that it picks up where Shemp Buffet left off and it keeps going on. There are things in this comic from an animated film that never got finished that I always wanted to use somehow, so I put them in there. I’ve been reading Bone and with Shaolin Cowboy, there’s not an overall grand opus. [laughs] We’re just following him around.

FS: I know that you try to pack as much action and art into every inch of Who’ll Stop the Reign?, but would say there are any themes that run through each of your installments?

GD: I guess there is an underlying theme that I unintentionally have. It’s quite eating-oriented. It’s either people being eaten or people eating something and it gets them into trouble, as you’ll see in future issues. People’s appetites get them into a lot of difficult situations.

The Eisner Award–losing and winning drawing-room talkfest The Shaolin Cowboy returns and will try to answer those questions as the titular hero of the series finds that his road to hell is paved not with good intentions but old nemeses hell bent on bloody revenge . . . AGAIN!!!!