It’s no secret that vitriol pours out of every corner of the Internet–particularly social media–on a daily, hourly, minute-by-minute basis. It’s… exhausting, and yet we are all drawn in one way or another: either jumping into the fray or silently shaking our head in disgust at what we see posted online.

Writer Fabian Nicieza (co-creator of Deadpool among scores of other stories) and artist Reilly Brown (who’s worked on blockbuster books such as Batman/Fortnite: Zero Point) have seen this, too, and have created a webcomic that addresses those issues and concerns. In Outrage, the title character can flit in and out of the Internet to track down those who would make the Internet a more toxic place to navigate.

Nicieza and Brown have recently partnered with Rocketship Entertainment to bring Outrage to print by way of an already-successful Kickstarter campaign. I spoke with Mr. Nicieza and Mr. Brown recently about the conceit of Outrage, the origin of the character and the series, the Kickstarter itself, and the prospect and hope for more installments of Outrage.

FreakSugar: For folks who might be unfamiliar with the series, what can you tell us about Outrage?

Fabian Nicieza: A mysterious being has been emerging out of people’s devices in glowing pixels of light, coalescing into a solid hologram form, and smacking the crap out of people who are being idiots on social media. After having done that enough times, and smacked around some people with political clout, the FBI starts to investigate what — or who — this phenomenon is.

Reilly Brown: It’s all about what would you do if you actually could reach across the internet and choke the person who you’re in the middle of a flame-war with on social media. Mix that concept with Fabian’s trademarked sense of humor that made Deadpool such a big hit, and you start to get the idea of what we’re doing here! 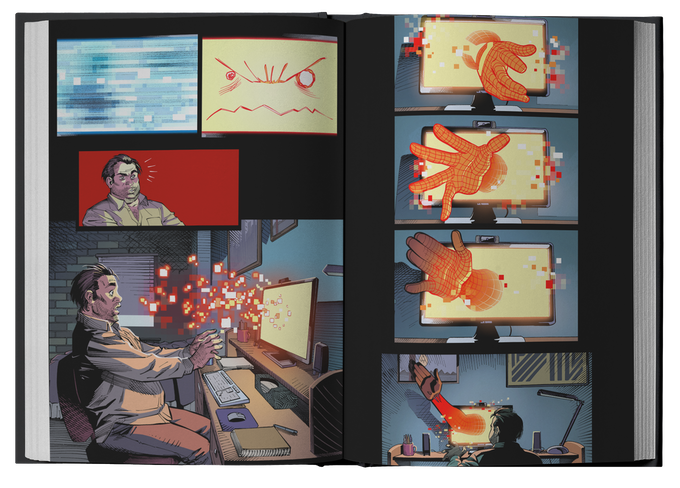 FS: Outrage seems particularly relevant in this age of Internet cyberbullying that we find ourselves in. Was there anything about Internet culture that impacted how you approached the series?

FN: The original idea came out of my exhaustion at seeing so many idiots on the Internet. And that was over 5 years ago, so you can imagine how I feel now!

RB: The Internet provides unlimited examples of nonsense.  I used to send Fabian links to things I’d see online and say “we’ve GOT to use this!” But eventually there were just too many examples, and more every day… 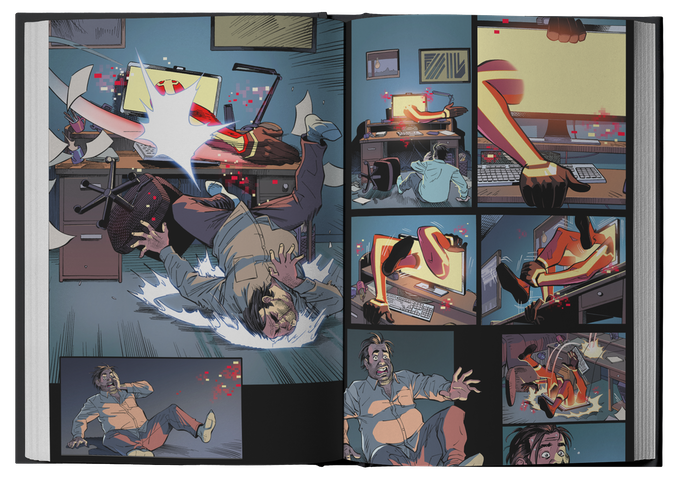 FS: What was the genesis of your collaboration together?

FN: Reilly was hired early in his career to take over the monthly assignment on Cable & Deadpool — I think it was sometime around 2006? He was really good and really smart and I like artists like that because they make up for how not good and not smart I usually am.

RB:  We were working on Deadpool & Cable: Split Second, and Fabian started telling me about this idea he had for a creator owned series that was the basic concept of Outrage.  While we were talking I started sketching out ideas to explain the screen-head concept that would eventually become Outrage’s signature look, and Fabian said “well now you’re drawing it, so I guess we have to make it actually happen!”

FS: Outrage has a robust cast of characters. What can you tell us about who we meet in the series?

FN: The main characters are Kenny Choi, Gunu Kapur,  Miriam Li and the other workers at the charity organization Re:Solutions. I can’t discuss too much about them, since they are all suspects in the search for who is behind the “Outrage virus”.

We do have two fun FBI agents, the curmudgeon Eliot Ernst and the aggressively-aggressive Daniella “Danny” Morrison who are hunting our hero down, as well as cameo appearances by fictionalized versions of many real television pundits and politicians.

Taking into account that the series was done in 2018/19, the characters and real-world intrusions are a time capsule into what we were all enduring during those years. 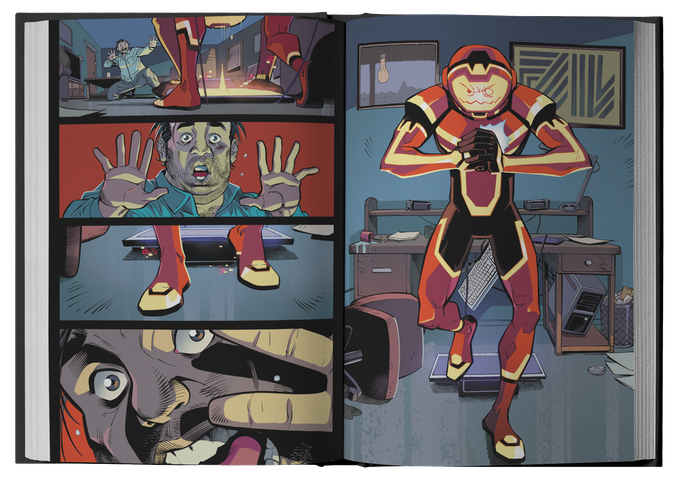 FN: Reilly and I had wanted to do a print version, and [Rocketship Entertainment CEO] Tom Akel reached out to us to consider bringing it to Rocketship. I wasn’t that familiar with the details of the Kickstarter model, though I had been really impressed by the freedom it was giving comic book creators to create what they wanted to do.

It wasn’t a hard sell for me to go with Rocketship, between my trust of Tom and the absolutely gorgeous quality of the work they produce, I felt they’d be slumming it a bit by bringing us in. But if someone is dumb enough to invite me to their party, who am I to not go?

RB:  I’ve never done a crowdfunding campaign before either, and it’s pretty exciting.  I was a bit nervous at first, but we nearly doubled our original fundraising goal in just a little over 24 hours, so it was encouraging to see people jumping to support the project!

FS: What are some of the backer rewards that contributors can possibly get their hands on?

FN: I am really bad at that part of it, which is why Rocketship has been so great to work with, since they’re really good at that part of it! I know we have hard covers, soft covers, signed bookplates, prints, commissions from Reilly, commissions from Reilly with me writing dialogue in them, great enamel “Omoji” pins — I really, really lose track. Wait, my favorite is a level where you can purchase a digital version of the print edition of what was originally a digital comic. I love that and it makes me happy to live on this planet!

RB:  Yeah, we really completed the ouroboros with that one! 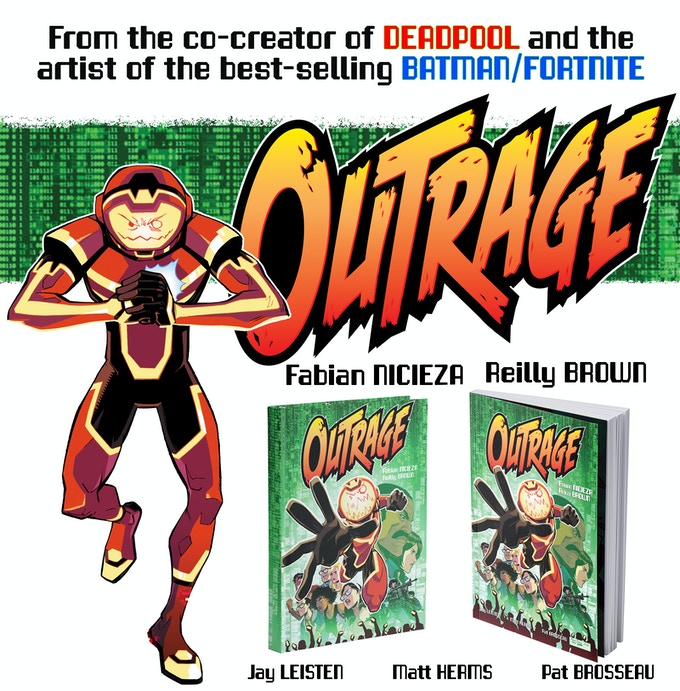 FS: Do you have more Outrage stories you want to tackle down the line?

FN: We still have to finish the digital version of Season 2, and after that, we’ll see what the future holds. It’s not like fifty new potential Outrage stories aren’t regurgitated on to social media on an hourly basis!

FS: What would be your final pitch to folks considering checking out Outrage and contributing to the Kickstarter?

FN: First reason, I hope you check it out is that we think Outrage is a good, fun book that tackles serious matters but doesn’t take them too seriously. While you frown at the world, you can laugh at yourself. It has great art by an excellent team, Reilly, inkers Jay Leisten with some help from Jeremy Freeman, letterer Pat Brosseau and color artist Matt Herms busted their asses week in and week out to produce high quality visuals that more than make up for my usual yammering.

The second reason is that I am getting really old now and I deserve  a nice beach community to retire to. [laughs]

RB: This is us doing the types of stories that Marvel and DC would never allow us to do, but it’s the stuff that we all secretly dream of doing every time we log onto Twitter.  Hopefully people will read it and say “oh man, I totally know that guy and wish I could smack him!” just as often as they say “oh man, I’m that guy and Outrage would totally smack me!”

It’s a fun story, and Rocketship is putting it together in a beautiful book, so please check it out!

As of this publishing, the Kickstarter for Outrage has already almost TRIPLED its initial goal, but you still have time to contribute and get in on the outrageous action! Click here for more information!