Wake up in the morning: vileness on the Internet.

Check your social media midday: bile and awfulness about on the TwitterBookSnaps.

Scroll the comments section on a news story: a minefield of anger.

Have you ever been reading these comments online and wish you could confront whichever “brave” instigator behind a screen and a keyboard is bullying a person or persons? That’s the idea behind Outrage, a new webcomic coming from LINE Webtoon later this year, written by Fabian Nicieza with Reilly Brown on art. In Outrage, an individual who can surf the Internet and physically appear at the source of the venom someone spews on social media decides to take matters into his own hands to clean up the web’s netscape.

Misters Nicieza and Brown spoke to me recently about the conceit of Outrage, where the idea manifested, and what we can expect to see in the series.

FreakSugar: For folks who might be considering checking it out, how would you describe Outrage?

Fabian Nicieza: I would describe it as a digital comic that you can read on your phone or pad by downloading the free Webtoon App. I would describe a comic as sequential storytelling that combines art and words simultaneously in the desperate hope of telling a story.

Once you log in to the app and make the worthy selection of Outrage as your reading choice du jour, you scroll the panels vertically. That means up and down. Mostly up with your finger. Or your tongue if you’re adventurous. Or your toe if you are very limber.

One panel usually appears on your screen at a time. Don’t read ahead, that would be cheating.

Reilly Brown: I usually just skip to the sexy parts.

You know when someone posts something stupid online that makes you wish you could reach across the Internet and kick them in the jimmies?  Outrage can do that.  That’s what the comic’s about, and we’ll be exploring all the petty and practical uses for that kind of cyber-psycho rage, as well as all the ever-snowballing unintended consequences.

FS: The conceit of Outrage focuses a good deal on bullying and the bullying culture that seems to pervade the Internet and off-line in the past several years. What was it about that culture that particularly spoke to you both that made you want to focus on it?

And like all genius writers, I then procrastinated for a couple of years before Reilly finally said, “Are we going to do this or not?”

RB: It’s just the world we’re living in.  It’s what people do, and I’m kind of surprised more stories don’t have a bit of this in them, because it’s become such a big part of social life.  We’re just diving into it deeper than usual.

The funny thing is that with every new online controversy, I keep thinking “Aw, man, once this blows over our whole concept is going to seem so out of date,” and yet somehow people always manage to find something new to hate each other over.
Stay angry, Internet!  At least until our comic comes out.  You can chill out after that. 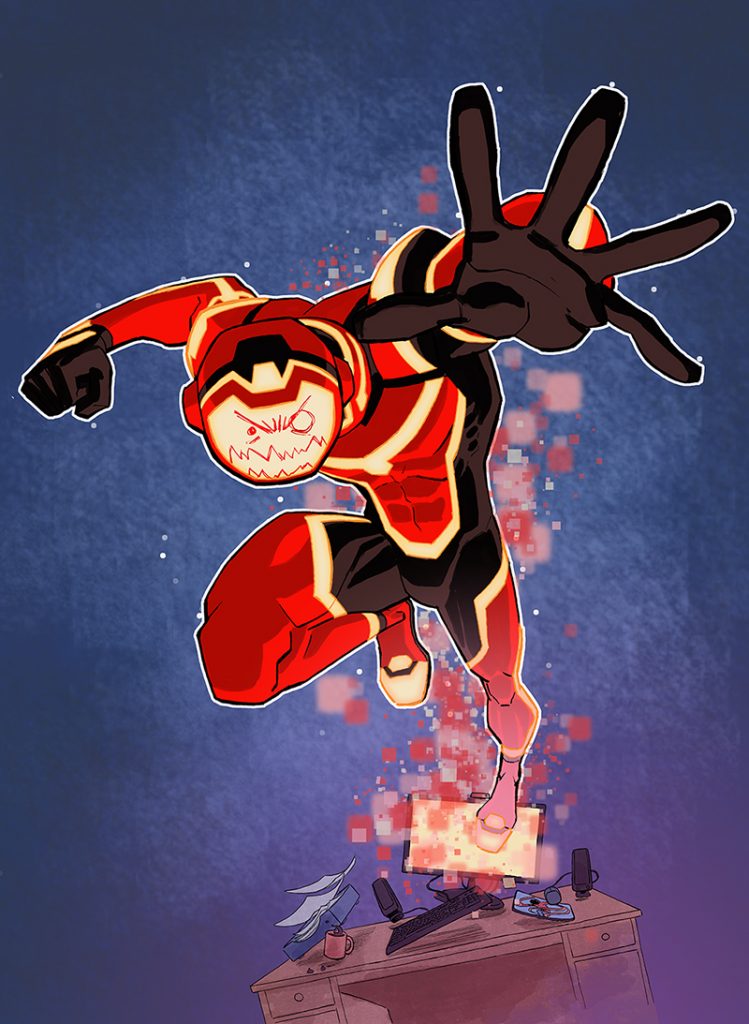 FS: Following up on that, what was the research process like as the series came together?

FN:  Not a whole hell of a lot! It’s hard to research stuff like this since there’s something new every five seconds you can draw from! We’ve been amassing various articles on real life outcomes of online staling or bullying, but this isn’t necessarily about the face-smacking of the day, it’s a story that has a beginning, middle and end.

What Outrage does is how we start it off, but then who Outrage is becomes the driving force of the story, but ultimately, the story — if we do our jobs right — should be about WHY Outrage is. Why does this person need to do this and vent in such a violent way… and what happens if that leads other people to decide that the Outrage way is the best way to go?

RB:  You try working with this guy for a few months and tell me you don’t want shoot Internet death rays at him. That’s all the research I need!

FS: Outrage sounds like it will be a bit of wish fulfillment for some readers, who may have grown fatigued with the vitriol and hatred that just gushes in every comment section online or even the most benign tweet or status on social media. Is that a fair assessment?

FN: Well, I think it could be a very fine line between separating vile vitriol on the internet from political correctness run amok, so hopefully we will be able to slap all sides of the coin with equal ferocity.

Which, you know, a great marketing plan, right? Abuse all sides so that EVERYONE in your audience hates you!

RB: If there’s a part you don’t like, that will be Fabian’s fault.  But if there’s anything you like, that’s all me!  So make sure you address your e-mails accordingly.

FS: What was the genesis behind the series and your collaboration together?

FN: Once upon a time, a brilliant young editor named Nicole Wiley (now Boose) realized she had no options left to find an artist willing to work with me on Cable & Deadpool for Marvel, so she asked a young neophyte artist looking to break in if he would do it. She promised it would only be for an issue or two, since no one could last much longer drawing my convolutedly, overly-plotted, techno-babble-dense scripts.

That sucker — I mean optimistic wunderkind — was a strapping lad named Reilly Brown. 10 years later, I have to beg him if he’d be willing to draw something I came up with. He said he would as long as my writing work didn’t entail plotting or scripting the pages.

RB: That pretty much sums it up.  Fabian was older, more experienced, and I was still fresh, young and eager, so he was kind enough to show me the ropes.  We parted ways for a number of years, but met up again for Deadpool & Cable: Split Second, and, well… the magic was still there.

FS: You’ve both worked heavily in primarily print comics. What made LINE the perfect fit for your series?

FN: I love the digital format. I worked with Reilly on a Deadpool and Cable project for Marvel a couple years ago and did some digital comics for a virtual world I’d been involved with as well.

What made Webtoon perfect is that they were dumb enough to want to work with us! Wait, did I say that out loud? What REALLY made Webtoon perfect is that they have a COLOSSAL site with a fantastic variety of genres and creative tastes that offer a global audience a nearly unlimited amount of content. They are the best out there for this kind of project and we were honestly very lucky that they wanted to work with us on it.

That’s me being sincere, honest.

RB: I’ve worked on a number of digital comics over the years, from Power Play to my current weekly Dash Hudson strip.  Actually, most of my recent stuff for Marvel, like Slapstick, Deadpool: Too Soon and stuff like that was specifically designed for a digital release as well as a print release, so I’ve really come to enjoy playing with the unique tools of digital comics.

My studio mate Dean Haspiel has been doing a number of strips for Webtoon over the past couple years and was good enough to introduce me to them.  For a comic like Outrage that is so internet-centric, there’s really no better place!

FS: Going forward in the series, without spoiling anything, what can readers expect to see in Outrage?

FN: They can expect to see a nifty digital comic full of heart and mayhem that appears one panel at a time on their phone or pad and then, using their finger, tongue or toe, they can expect to see the panel that follows afterwards with a simple swipe (that’s a swipe up, unless you want to go backwards, then swipe down). And if you want to go nowhere, swipe left or right.

And if we do our jobs right, they can laugh a lot, flinch with awkward discomfort a lot, see a little of themselves (for good and bad) and come away wondering just how badly we have ruined our civilization with this wonderful construct known as social media.

Outrage, written by Fabian Nicieza with Reilly Brown on art, debuts this year from LINE Webtoon.

Best recognized as the co-creator of Marvel’s Deadpool and X-Force, writer Fabian Nicieza is familiar with drawing readers into the world of crime and justice. He has written and created dozens of storylines and characters for Marvel, DC Comics, and Dark Horse, including New Warriors and Thunderbolts. A comic book artist and illustrator who started self-publishing comics in 2002, Reilly Brown has since worked for Marvel, DC, Dark Horse, and Archie. He is best known for his work on hit comic franchises such as Deadpool and Spider-Man. Brown is also a founding member of the Internet artist collective Ten Ton Studios.

Their newest series, Outrage, is the story of a mysterious individual who can navigate the Internet and physically manifest at the source of the vile bile that spews throughout social media. Along with an array of weaponry limited only by his imagination, Outrage can exact a swift, merciless pummeling of anyone who triggers, humiliates, mortifies, stalks, hawks, balks or otherwise abuses someone on the Internet. And also, anyone who doesn’t know the difference between their, there and they’re. But who or what is Outrage? Why is he – or she – so angry? And can this mysterious entity be tracked down before the interweb explodes with violence?

“As the world continues to become more connected and social media dominates the way people communicate, bullying and negativity unfortunately become more prevalent as well with users hiding behind the shields of their computer screens,” said Nicieza. “I wanted to take a unique spin on the vigilante, creating a new kind of cyber hero in the vein of Deadpool meets Mr. Robot meets The Office. I knew right away that LINE Webtoon and its huge digital community were the right audience for this series.”

“It’s an awesome experience to be working with Nicieza again for this series, because he pays me to say things like that,” added Brown. “Modern society is rampant with virtual abuse, and it has been a lot of fun bringing this vigilante character to life who is doing his part to stop the trolls.”

“Having people like Fabian Nicieza and Reilly Brown, who have made their incredible mark in the world of comics, come together and create a new series for our readers is very exciting,” said JunKoo Kim, Founder and Head of LINE Webtoon. “The subject matter of Outrage is something that all social media users can relate to and we know our readers are going to love it.”