Yakko, Wakko, and Dot, the Warner Brothers–and Warner Sister–are heading back to the small screen for an Animaniacs reboot, led by original series director Steven Spielberg. According to Indie Wire, the legendary filmmaker will work with Warner Bros. and his Amblin Television production company to bring the project to life. While the series doesn’t have a home yet, that shouldn’t be a long-term problem, given the popularity of the 1990s cartoon. And given the hits-and-misses that WB cartoon reboots have had in recent years–remember the cartoon featuring the super-powered Bugs Bunny and company?–it’s heartening that Spielberg is behind the reboot to keep the works from being mucked up. 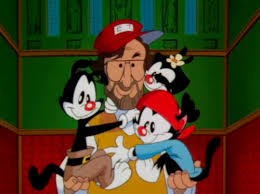 Animaniacs racked up the well-deserved accolades during its 99 episode run, including several Daytime Emmys and a Peabody. The series, composed of different segments featuring characters such as the Warners, Pinky and the Brain, and the Goodfeathers, mixed irreverent humor, a sharp wit, and slapstick comedy, drawing younger and older viewers alike.

While we wait for new Animaniacs episodes, we can still catch the original series’ entire run on Netflix.