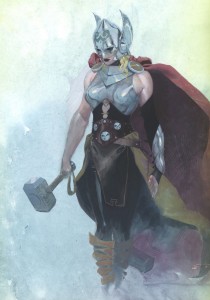 This morning on ABC’s The View, Marvel decided to announce the arrival of a new thunder god(dess) in town. This October, Thor, the Asgardian deity of thunder and son of Odin, will be a female.

(Why Marvel chose The View to make such an announcement escapes me, but it probably has more to do with the fact that The View and Marvel are both owned by Disney and less to do with Jenny McCarthy’s aversion to all things science.)

In a new ongoing series this fall by writer Jason Aaron, who has been writing Thor: God of Thunder for Marvel, and artist Russell Dautermann (Cyclops), Thor, who will be found unworthy to wield the magical Uru hammer Mjolnir, will no longer wield the thunder and the lightning. As his successor, a female will take Mjolnir to the skies. In a Marvel press release, writer Jason Aaron states, “This is not She-Thor. This is not Lady Thor. This is not Thorita. This is THOR. This is the Thor of the Marvel Universe. But it’s unlike any Thor we’ve ever seen before.” 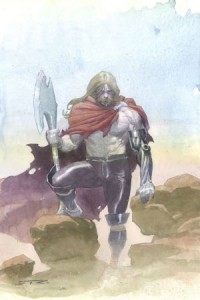 The art Marvel has released is beautiful, with the new Thor wearing a helmet reminiscent to the one worn by human Eric Masterson during his time as the God of Thunder. Also released is a picture of the original Thor missing his left arm, replaced by a robotic substitute. How he loses that arm is also a mystery.

This isn’t the first time Marvel’s versions of the gods of Asgard have swapped genders. During J. Michael Straczynski’s run on Thor, Loki used the body of Sif, Thor’s love, to take the guise of a woman. In the alternate reality story Earth X, Odin transformed Thor into a woman to teach him humility.

Read the full story of the new Thor at Marvel’s website.