While we still won’t know who the woman is who will be taking the place of Thor as the wielder of the thunder and the lightning until next month’s Thor #1, we do know that whoever she is will cause major changes in Thor’s magical uru hammer Mjolnir—to its creed, at least. 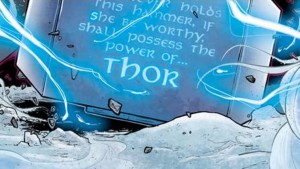 In preview pages of Thor #1, we see a woman draped in shadows standing on the Moon, bending to pick up the enchanted hammer. As she picks up Thor’s famed weapon, blue lightning encircles the hammer, highlighting a change to the traditional inscription (emphasis mine):

Whoever holds this hammer, if she be worthy, shall possess the power of… THOR.

Note the gender pronoun change there. The inscription has, in the past, referred to “he”. With a woman now carrying the mantle of Thor, it makes sense that the enchanted creed placed on Mjolnir by Odin, king of the Asgardian gods and the male Thor’s father, would change.

Back in July, Marvel announced on ABC’s The View, of all places, that the Marvel Universe’s Thor would be a woman in the near future. Hints were dropped that the male Thor would become unworthy of wielding his uru hammer. We got to see the first hints of this at the end of last week’s conclusion to Marvel’s Original Sin miniseries, as Thor was depicted having issues lifting Mjolnir.

We won’t have long to wait to see who the mysterious woman is in the previews or what the original Thor did to lose his hammer privileges. Thor #1, written by Jason Aaron with art by Russell Dautermann, hits newsstands October 1.