While the above quote applies to The Narrator in Chuck Palahniuk’s best-selling novel Fight Club, it can just as easily be asked of Craftone’s latest 1/6th scale figure “Figther”. Indeed, Figther has an incredibly familiar face– in fact, he has TWO incredible familiar faces, along with a screen accurate wardrobe for Brad Pitt as he appeared in Fincher’s Fight Club film as the anarchist-about-town Tyler Durden; but, as far as I know there’s never been a Figther Club flick. Probably.

The sixth-scale action figure market has been in a boom period over the past few years thanks, in no small part, to Hot Toys and they’re ability to capture uncanny likeness from pop cultures biggest blockbusters. While companies like Hot Toys, threezero, and Sideshow Collectibles have the added incentive to create buyer-demanded pieces of plastic crack thanks to the licensing fees they’re dishing out, while other producers simply release likenesses of famous actors by sheer coincidence. Right? Right?! Whattaya mean, “Those companies are just tryin’ to make a quick buck without paying the cost for licensing because they’re overseas and it’s practically impossible to stop them”?!

So, what’s this bootleg/unlicensed figure all about? Well, I ordered one to find out for myself– and to share the findings with our faithful FreakSugar readers, of course.

The packaging for the figure is top-notch. The photo on the front, along with the all-too familiar font, are very inviting. Sliding the top from the box reveals a piece of gray padding. Not overly exciting, but once you remove that, then you can see the figure and all of it’s extra contents. The cut padding works perfectly at holding every non-Palahniuk-approved scrap of plastic and cloth in it’s sanctioned place. Upon first opening the figure, I was briefly awash in a feeling of shame, and I’ll definitely check that off in the “con” section but, thankfully, I’m a shithead, and as such, was promptly back to my selfish and upbeat ways with the prospect of checking this toy out being the sole victor in the battlefield of my morality.

2 rings, a cigarette, and a lighter all included in the box.

Yes, there are more words to read after all of those photos. You sticking around? Good. Let’s chat about this thing for a bit. The inclusion of two heads, and enough clothes for two distinct looks makes the $180 I dropped on it a little more palatable. Both headsculpts are easily recognizable as Brad Pitt with no obvious changes to skew the likeness like you’ll find on a number of generic 1/6th kits like “Zombie Hunting Sheriff Dick Dimes” and “Cortan The Barbarian”. Figther (here on out referred to as Tyler, or whatever else I feel like. Try to keep up.) not only has spot-on sculpting for the portraits, but the paint work is clean. Although, I will say that the short-haired head has enough airbrushed shading on his face to emote both danger and/or not bathing after working as a chimney sweep in Victorian London. The clothes fit properly and are extremely high-quality, even compared to what I had been expecting. The fabrics are soft enough that they all layer correctly such as the pants bunching up in the top of the work boots to the leather jacket’s collar not sticking up like some kind of damn 50’s greaser. My only complaints as far as accessories are concerned is with the mesh tank top. It’s annoyingly tight when trying to remove it from the figure, but hangs entirley too loose around the torso and too long around the waist. And if there’s anything on this friggin’ planet I’m an expert on, it’s mesh tank tops! 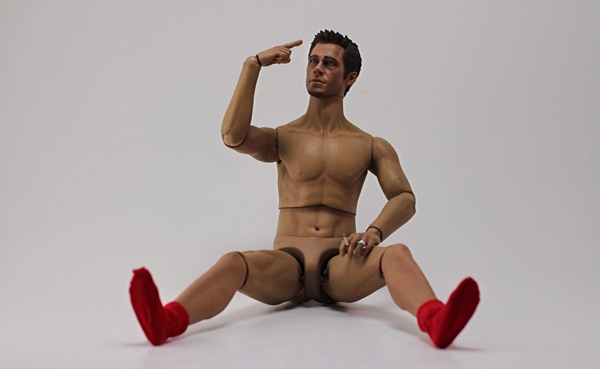 As you can see from the full-frontal nudity in the above pic, Not-Tyler doesn’t have the best frame– especially when comparing it to his look in Fight Club. It kills things when trying to show off the “No shirt, no shoes” rule of Fight Club when the figure looks like an emaciated giraffe instead of the character it illegally represents. Not that Pitt was huge in the film, but the lack of muscle tone, and saggy pecs this body brings to the table are definitely not ideal. The range of articulation this body has is limited by the sculpting rather than the actual number joints. While it features ball-joints at the neck, torso, waist, and hips, and swivel-hinge shoulders, elbows, wrists, knees, and ankles; I highly recommend tossing this body into a box and never speaking of it again. There are plenty of aftermarket fix-ups available online, and since this is definitely not from Hot Toys, there are no worries necessary about “messing up the resale”. The multiple hands fit well, but my only complaint is that none feature the chemical burn “kiss”. Dammit, Craftone! If you’re gonna make this thing, might as well go all the way! 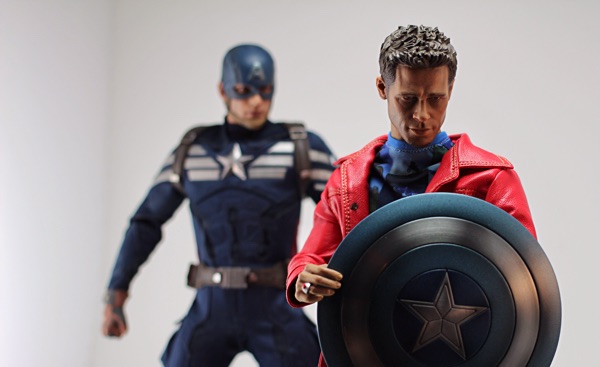 Overall, this Figther figure from Craftone is worth the scratch if you’re a fan of Fight Club, or just a sixth-scale collector wanting to add a little variety to your shelf with an unlicensed kit. Hell, if you have an extra blank body or two (as discussed previously) the package allows for two full figures! Could it be better? Of course it could. Could it be worse? I totally expected it to be.