Howdy, folks! Happy post-Turkey Day! You came back! Awesome. Welcome to another installment of FreakSugar’s Flashback Friday, now in glorious Technicolor. Today’s episode transports us to that magical time known as the 1990s. Will Smith was still years away from producing a shitty movie, Vanilla Ice was Ninja Rapping your face off, and a certain purple villain was slaying his way through the Marvel Universe. That’s right: With all of the attention Thanos the Mad Titan is getting in Marvel’s cinematic universe, I thought now would be the perfect time to throw the spotlight on a story many comic book readers consider the apex of Thanos’ popularity, The Infinity Gauntlet.

Comic book fans will tell you that there’s something about your first. Whether your first comic book was a random issue of Batman, a back issue of Uncanny X-Men, or, as in my case, an issue of Archie Comics’ Teenage Mutant Ninja Turtles (featuring the first appearance of Mondo Gecko), there’s just something special about the first comic book you purchase, leaving an unmistakable, unshakeable mark in the halls of your memory.

The same applies, at least for me, to the first “Big Event” comic book crossover I ever laid hands and eyes on: The Infinity Gauntlet. I’ve written quite a bit in other articles about the glut of Big Event books and miniseries that Marvel Comics and DC Comics roll out every four months or so and the fatigue that some readers claim accompanies that onslaught of books. However, while other of these types of stories weren’t unheard of prior to Gauntlet’s publication—we had at least two Secret Wars miniseries over at Marvel and Crisis on Infinite Earths at DC—it certainly didn’t feel like there were as many of them published like there are today. That could be nostalgia rewriting my memory, a memory 23 years later at that, but when the first installment of The Infinity Gauntlet hit the newsstands at my local grocery store (back when you could still buy comics at grocery stores—I’m old), the cover and interiors got me all a-tither.

“This is gonna be big! Death and Satan are right on the cover! And look at all of the heroes involved! Crap’s about to go down, y’all!” I’m pretty sure I thought at the time.

This was at a time when I didn’t realize that comic book deaths didn’t mean shit and dead didn’t necessarily mean forever unless you’re Spider-Man’s Uncle Ben. But even looking at the book with the eyes of a jaded comic book fan who doesn’t get surprised at any development in the industry—with the exception of Kevin Smith finishing writing a book on time—Gauntlet has its merits and is worth giving a look 20+ years later.

Hitting newsstands in 1991, The Infinity Gauntlet was the follow-up to The Thanos Quest, a two-issue miniseries following Thanos as he gathers the six Infinity Gems (called Infinity Stones in Marvel’s films) from the cosmic characters across the universe. Each gem grants the user full dominion over a particular aspect of existence: reality, time, power, the mind, the soul, and space. Wielded together, the user becomes the chief deity of all there is. Thanos, recently resurrected by Mistress Death, is charged by his savior to slay half the universe’s population, as she feels that reality has become overly bloated with sentient beings. Besotted with love for his Mistress, Thanos gathers the Infinity Gems to fulfill her wishes. 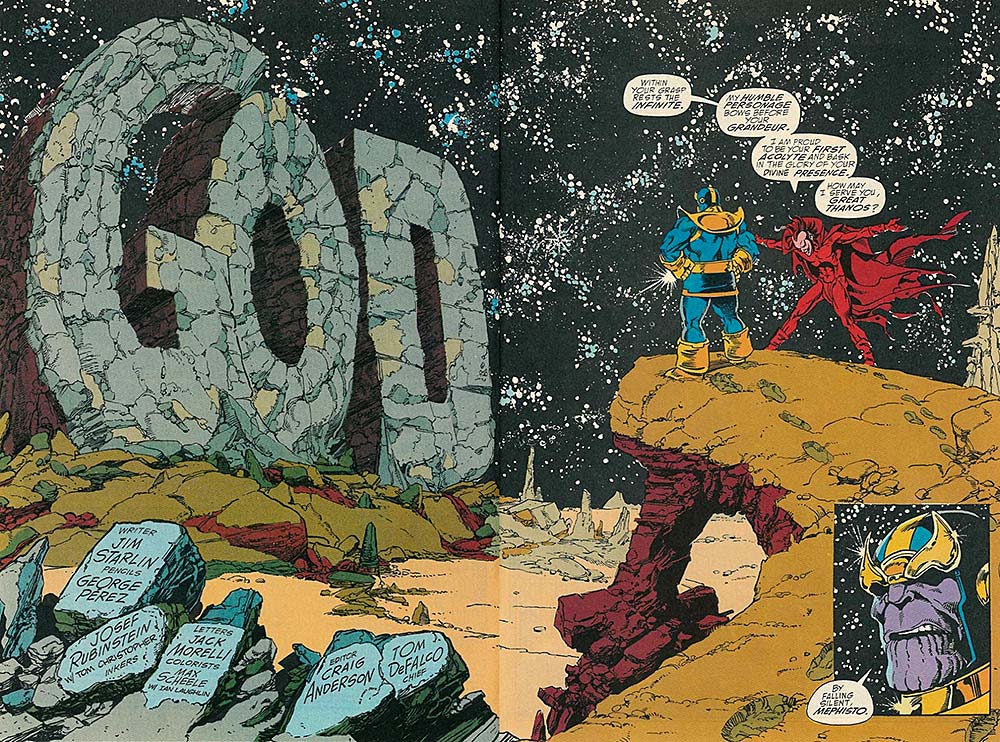 In Gauntlet, Thanos makes good on his promise, and with a snap of his fingers the universe becomes overcrowded by half. As a result, not only does the Marvel Universe’s regular human population take a hit in numbers, but also many of its heroes. As if they were but an afterthought, such do-gooders as the Fantastic Four and most of X-Factor simply cease to be. The impending chaos resulting from the universal crisis leads Earth’s heroes to assemble to decide what to do about the threat Thanos poses. Led by Adam Warlock, Thanos’ one-time partner, Earth’s heroes and cosmic entities wage a full-scale assault on the mad god. However, when Warlock’s efforts fail, the only thing that might be able to stop Thanos is the villain himself. 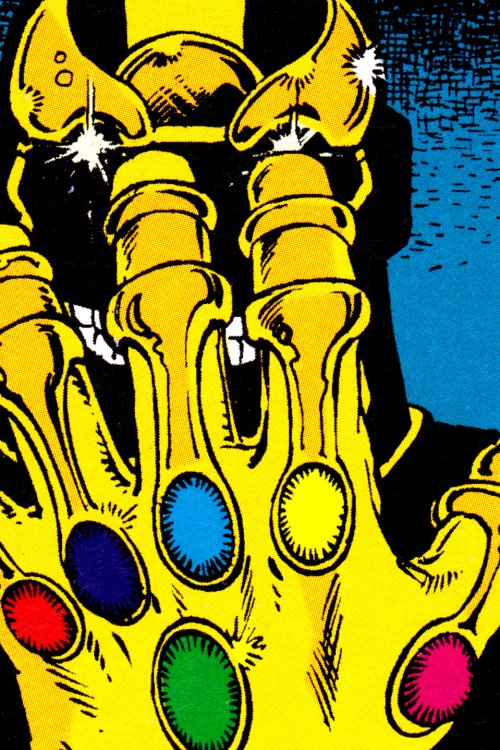 One of my pervading memories of reading Gauntlet as a kid is the gorgeous art featured by George Perez. While the superstar penciler had made a name for himself on such comic book titles as The Avengers and The New Teen Titans, Gauntlet was my first exposure to the level of detail that Perez brought to the table. The man did not skimp on anything in his work, from the individual bricks found in Thanos’ floating palace to the pustules crisscrossing the face of the Titan’s granddaughter Nebula. The scope of writer Jim Starlin’s story would most likely not have been possible had any artist held the initial reins to the pencils of Gauntlet. While Perez would eventually have to acquiesce art chores to Ron Lim (no slouch in his own right) due to fatigue, the duo’s work on the book made the comic fan know he was reading something special. 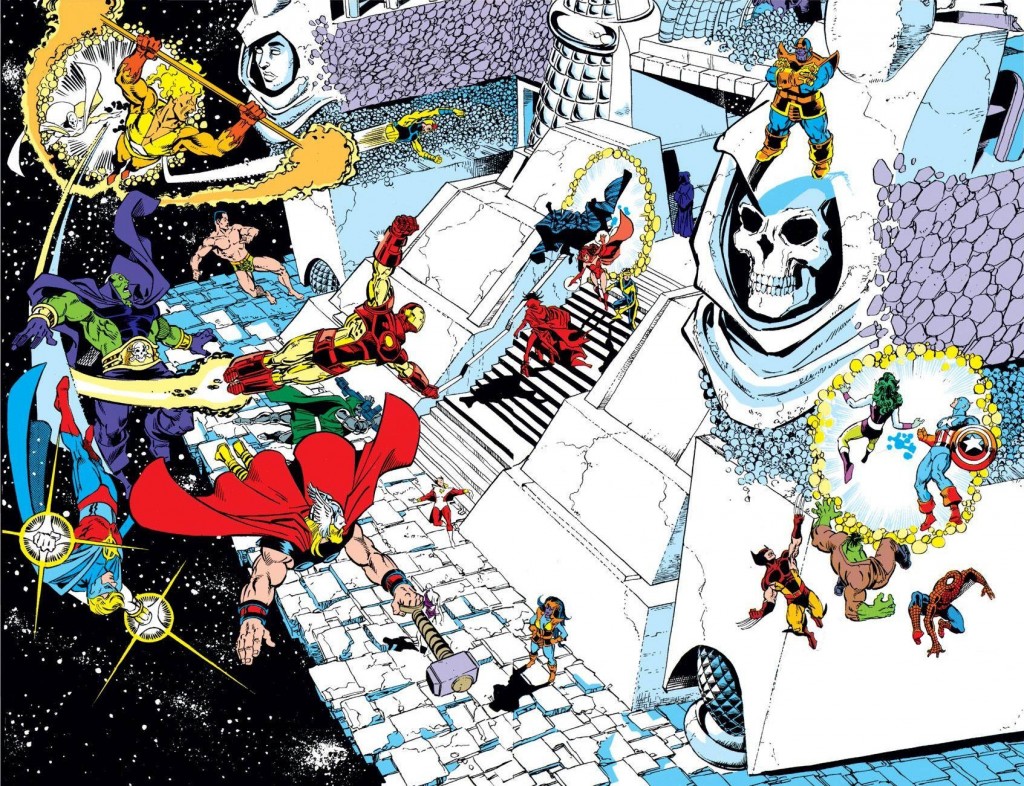 The really notable thing about Gauntlet that I picked up upon rereading the tale is how much Starlin had to say about the nature of self, being aware of that inner self, and how everyone—using Thanos as proxy—sometimes has a tendency to be their own worst enemies. We chase after what we think we want, putting aside good sense and reason in our quest to attain what we desire, only to ultimately be tripped up for our efforts. In attempting to please Mistress Death, Thanos becomes intoxicated with power and, upon attaining that power, loses it almost as quickly as it was won. After Thanos loses his deity status, Warlock points out to him that, time and again, Thanos gains power, only to let it slip through his grasp because, ultimately, Thanos knows he is not worthy of it. Starlin seems to want to say that sometimes our own subconscious can undermine what we think we want. How many relationships and goals have been rent asunder because of how we undercut our own efforts? 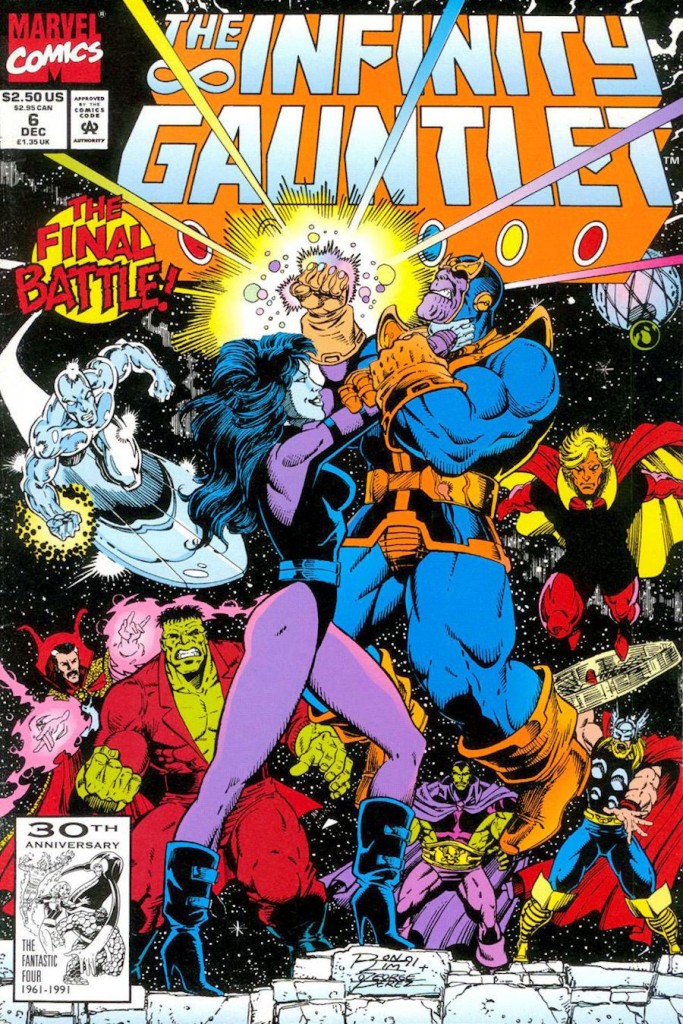 A couple of other highlights to the tale include the roles of Mephisto, Marvel’s version of the Devil, and Adam Warlock. Throughout the tale, Mephisto stays at Thanos’ side, acting as a sycophantic advisor to the new god. His role mirrors that of Iago from Shakespeare’s Othello, subtly manipulating Thanos until the time is right to seize the power of the Infinity Gauntlet for himself. Likewise, Warlock uses his silver tongue to shift Thanos’ movements to his own ends. For all the power that was exerted from all parties, for all the sound and fury of the battles against the Mad Titan, what really influenced the affair was wordplay and manipulation.

Prior to the two-part Avengers: Infinity War films a few years down the line, do yourself a favor and check out The Infinity Gauntlet in paperback. While the beauty of the story is candy for the eye-holes, the brilliance of the story comes from what we can glean about human nature and how we can trip ourselves up by our own hands. Tune in next week as I throw the spotlight on one of my childhood favorites: Calvin & Hobbes.