The problem with comic books, especially corporate comic books from DC Comics and Marvel, is that the creators have to maintain the illusion of change while still remaining somewhat static, accessible for new readers who are meeting heroes and villains for the first time. This becomes problematic when dealing with younger characters, as readers can old suspend disbelief before so long until keeping sidekicks in short-pants after decades and decades of publication seems laughable. Eventually, the youngsters have to be allowed to grow up.

Take Batman and Dick Grayson, the first to bear the colors of the Dark Knight’s sidekick, Robin, the Boy Wonder. You probably all the story, but for the uninitiated, Dick was a young trapeze who performed with a traveling circus with his mother and father. During one performance while Bruce Wayne was in attendance, Dick’s parents fell to their deaths, their equipment rigged by gangsters trying to extort money from the circus. Bruce took in the young man and eventually reveals his dual identity as the Caped Crusader. He trains Dick to become Robin, the Boy Wonder, first taking out the gangsters who murdered his parents and then going on to fight the rest of Gotham City’s criminals.

While the two characters had a relatively positive working relationship, Dick Grayson was allowed to age and, as comes with growing up, Bruce and Dick began to clash on numerous occasions with more and more frequency. Bruce and Dick might have been a dynamic duo while pursuing criminals, they were also, effectively, father and son, and, as we all know from experience and literature, fathers and sons eventually clash. Although various conflicting stories have been told as to what ultimately caused the split between the two, the difference in ideology and methods that grew between the crimefighting partners can be pointed to as one of the primary causes for giving up the Robin mantle and becoming his own man. Readers of Batman’s tales in the comics know that he can be brooding and a bit of a hardass, while Dick was always more lighthearted during his work as the Boy Wonder. Dick went on to become the hero Nightwing, out of the Dark Knight’s shadow and a respected hero by everyone in the DC Universe, some villains included. 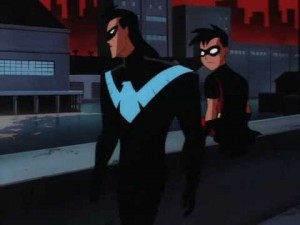 However, while comic book readers knew about the schism that occurred between Bruce and Dick, the various animated series featuring the dynamic duo never touched on it. That’s why it was very interesting to see that when Batman: The Animated Series, the first bit of media outside of comics to touch on the issue, addressed the issue, the creators didn’t pull any punches, literally. In the episode “Old Wounds,” a Dick Grayson who has already moved on to taking on the persona of Nightwing, recounts the argument that drove a wedge between him and Bruce to the current Robin, Tim Drake. Dick tells Tim a tale of being frustrated with Batman’s constant demands on his time, Batman’s seeming inconsideration of his feelings, and Batman roughing up a criminal in front of the man’s family.

However, what eventually led to Dick shedding the Robin mantle was when he found out that Bruce knew that Barbara Gordon, Dick’s friend and love interest, was actually the heroine Batgirl but didn’t tell Dick. As Dick throws down his mask and cape, Bruce tries to stop him so the two can talk, leading Dick to punching Bruce to the ground. Watching it again for this article was just as shocking as the first time I saw it on television.

One reason that the scene resonated so much with me is that it rings true to our experience as human beings. We all, in some way or another, have to make a break with the authority to which we always deferred and carve out our own paths. I was a teenager when I first saw the episode and it made me reflect on how I viewed the adults in my life and how I didn’t always agree with their ideologies or points of view. That doesn’t mean either side was right or wrong, just that there comes a time when we have to reassess who we are and determine if our values mesh with those we always looked to as beacons of knowledge. Dick had just graduated from college in the episode, and throwing the cape and mask of Robin at Batman was his graduation from being a sidekick and being his own man instead.

And, really, even though Batman redeems himself by the end of the episode, the dude was being a total dick (ha!) and needed cold-clocked. That was satisfying.

Thanks again for joining me for Flashback Friday! On the path to becoming who you are, here’s hoping you don’t have to punch a crazy-ass dressed as a bat in the jaw.