Howdy, statistics lovers and bar-graph aficionados! Welcome back for another edition of Flashback Friday, now with 100% quantitative data! What’s with all this high-falootin’ lingo that would normally only see in someone’s doctoral thesis? It’s as simple as reading a pie chart. This week, I’m taking a look back at Tim Leong’s ode to the comic book lover and data nerd in all of us, Super Graphic: A Visual Guide to the Comic Book Universe.

I’m a big fan of lists. I have lists on my computer, lists on my iPhone, lists in my calendar, lists in my organizer. I have lists of things I need to do, bills I need to pay, people I need to call, things I want to buy. It probably appeals to my OCD as well as self-awareness that I have the attention span of a squirrel and knowing that, without my lists, I’d forget my own cell phone number. In addition, making lists and forming connections between items on those lists helps make the chaos and clamor of everyday life a bit more bearable and manageable.

Also, making lists can be fun. For reals. When I was in 6th grade, my fellow comic book nerds and I would sit in class, writing down as many superhero names we could think of off the top of our heads. (This counted as our fun in pre-Internet days.) I used to have notebooks filled with sheets and sheets of character names, from Captain America to Yondu Udonta, with a section cross-referencing in which major stories you could find those super-folks. (I didn’t date much in middle school. The ladies were clearly missing out.) My nerd squad and I would then discuss character attributes of each fellar we put on our lists to see how much we could recall without going back to the primary sources, i.e. the comic books. I’ve been self-effacing about it so far, but it was really fucking fun and I was a pretty content kid when we had our little brain-trust discussions.

That’s why it’s no wonder that I fell in love with Super Graphic as soon as I caught wind that such a book even existed. The book is packed to the gills with information you would never need to know in daily life, yet will appreciate as you read it, from the broad to the obscure. Leong employs Venn diagrams, maps, bar graphs, pie charts, and more to quantify and qualify the multitude of comic book characters spanning various companies and multiple decades. From a graphic recounting which characters in the Marvel Universe have worn the Venom symbiote costume to the evolution of Batman’s utility belt over the years, Super Graphic has something for everyone from the hard-core comic book nerdbot to the passing fan who might have seen that guy with the cape and the lasers in that one movie. If you want to learn about the Gotham City Police Department, what content has led to a comic book being banned, or which companies own the movie rights to Marvel characters, this book has all that info and more. 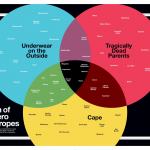 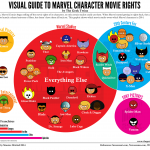 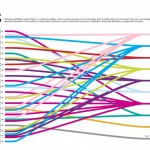 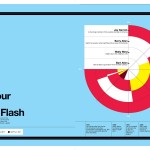 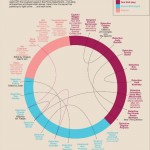 In this age of infographics, Super Graphic is the ultimate lazy Sunday book. Some of the charts are incredibly dense—try not to go cross-eyed when reading the team affiliations of characters in the Marvel Universe—while others are very tongue-in-cheek—such as the charts detailing Comic-Con cosplay. All of the charts, though, will keep you engaged and help you wile away the hours. Honestly, it kinda pisses me off that I didn’t think of doing this book first, because, in hindsight, it’s such an obvious but brilliant idea. I guess that’s why Leong was such a great fit at Wired magazine.

If you’re looking for the perfect gift to give the quant-geek in your life, really consider giving Super Graphic a gander. I can’t help but think that 6th grade me would be nerding out right now.