Part of the appeal to the Iron Man character, something that actor Robert Downey, Jr. brings to the role perfectly, is that Tony Stark is an arrogant son of a bitch. Some that is due to the fact that he is so skilled at what he does, as an inventor, a businessman, and a superhero, all of which might taint even the most humble of men with the sometimes overabundance of confidence Tony exudes. At the same time, to make the kinds of decisions he does in all three of those roles, a person might very well need to have that type of decisiveness to his character, come what may and damn the consequences.

However, comic books are riddled with stories of what disasters the hubris of humanity can bring down on itself and the people they love most dearly. It’s no secret that the plot of the film The Avengers: Age of Ultron, hitting theaters next Friday in U.S., centers on Tony’s creation of the Ultron robot as a peacekeeping measure, a decision that ends disastrously for both the Avengers and the rest of the world. But the thing about Tony is that no matter how much he screws up, he makes every attempt in his power to right the ship. In his comic book tales, we get to see this cycle of fuck-up and clean-up time and again, but none with such radical steps as in writer Matt Fraction and artist Salvador Larroca’s tale The Invincible Iron Man: World’s Most Wanted.

Tony Stark has always been a futurist, trying to auger in what direction the winds are blowing and preparing for the best possible outcome of that future. After the decisions of a group of brash young superheroes resulted in a confrontation with a villain that left many schoolchildren dead, the United States government introduced legislation requiring superhumans to register as such. Tony, rightly predicting that the legislation would pass, took up the pro-registration cause as he saw that change was inevitable and the only way to protect his superhero friends would be to get ahead of the situation as best he could. This led to a butting of heads with the anti-registration Captain America, and the line was drawn down the middle of the superhero community. (An adaptation of the story, Civil War, is being used in the third Captain America film.) 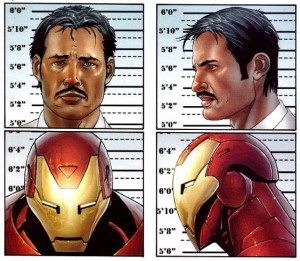 After Captain America surrendered and his anti-registration comrades lost, Tony was put in charge of the world peacekeeping organization S.H.I.E.L.D. However, after a series of perceived blunders on Tony’s part, the U.S. ousted him from his position, filling the spot with Norman Osborn, the former Green Goblin and thorn in Spider-Man’s side. (Don’t ask.) Fearing that Osborn would use the superhero database to strike back at his enemies, Tony uploads a virus to wipe clean any records that would reveal the identities of his friends. However, Tony’s mind still retained all the knowledge of ever superhero alter ego, so he strikes out on a mission to delete the copy of the records from his brain. He can’t simply kill himself in the off-chance his memories could be harvested from his dead body. His actions result in Tony not only destroying the file that rested within him, but burning through his memories, his personality, and his cognitive and bodily functions, leaving him, essentially, comatose.

Superhero comics have a grand history of heroes trying to do their best, but occasionally failing and tripping along the way. Tony Stark is an exemplar of how bad decisions don’t have to define you and that you can rectify your mistakes. Just as Tony does everything big and boldly and loudly in his personal, superhero, and business lives, so does he adopt that sensibility to repairing damage that he’s made. While we could argue that deleting his mind might have been an extreme response to the situation at hand, Tony hardly does anything half-assed, and this was another example of that. The character of Tony Stark can be admired for a lot of reasons—his mind, his confidence, his business acumen—but what always appealed to me about Tony most of all is that he loves his friends and knows that he can be a fuck-up, but will still do what he can to fix what he’s damaged.

Thanks for showing up again for Flashback Friday! May we all always have the courage to admit when we are wrong and have the strength of character to make amends in the best way we know how.