The sport of basketball has a long and varied history, peppered with larger than life characters and twists and turns along the way. Comic book writer Fred Van Lente and artist Joe Cooper recently decided to explore that rich history with their comic The Comic History of Basketball: A Fast-Break History of Hoops from Ten Speed Press. In History, Van Lente and Cooper do a dive into the ins and outs one of the world’s favorite sports, throwing in nuggets of hoop history you might have not known along the way.

I had the chance to speak with Misters Van Lente and Cooper recently about how they became involved in The History of Basketball, their approach to telling the tale of the game, and what they hope readers take away from their story. 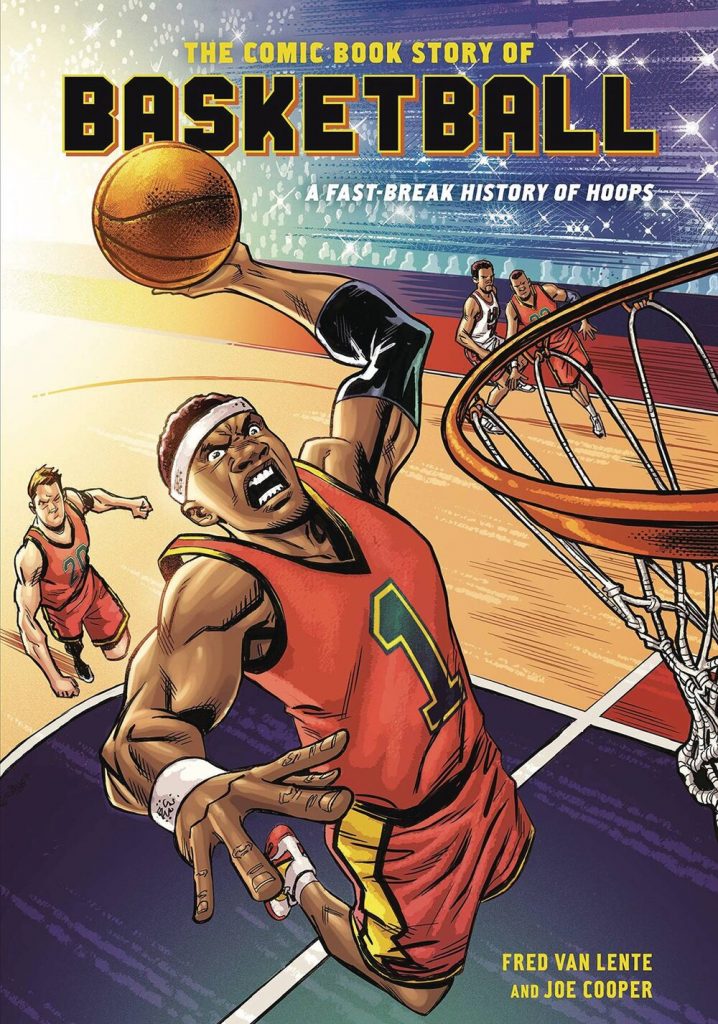 FreakSugar: Before we get into the book itself, why did you choose to focus on basketball?

Fred Van Lente: Ten Speed has done a lot of great comic book stories on the history of beer, video games, and pro wrestling. They approached us about adding basketball to the mix, and Joe and I are big fans, so it was a natural fit. Like most of the topics I cover in non-fiction—from presidential history, to philosophy, to comics themselves—I found myself with an even deeper love of the subject than I had before. I hope folks who read the book become bigger fans after reading it too!

Joe Cooper: Not much to add here. I’m big fan of basketball and an even bigger fan of Fred’s. It made my decision to come on board super easy.

FS: What kind of research went into crafting the book?

FVL: A lot of reading, a lot of web searching, a trip to the Basketball Hall of Fame in Springfield. I gained a huge appreciation of Kareem Abdul-Jabbar’s writing—particularly his book on his early years and time with Coach John Wooden at UCLA. If you have HBO Max, I’d recommend the documentaries Magic and Bird, and City Dump, which is about the infamous NCAA point-shaving scandal.

JC: Fred really did the heavy lifting in regard to researching the book. Based on his script I gathered a lot of reference material on many of the personalities, locations, uniforms and more. Many photos of the early days are in black and white or don’t exist which made some chapters especially challenging. 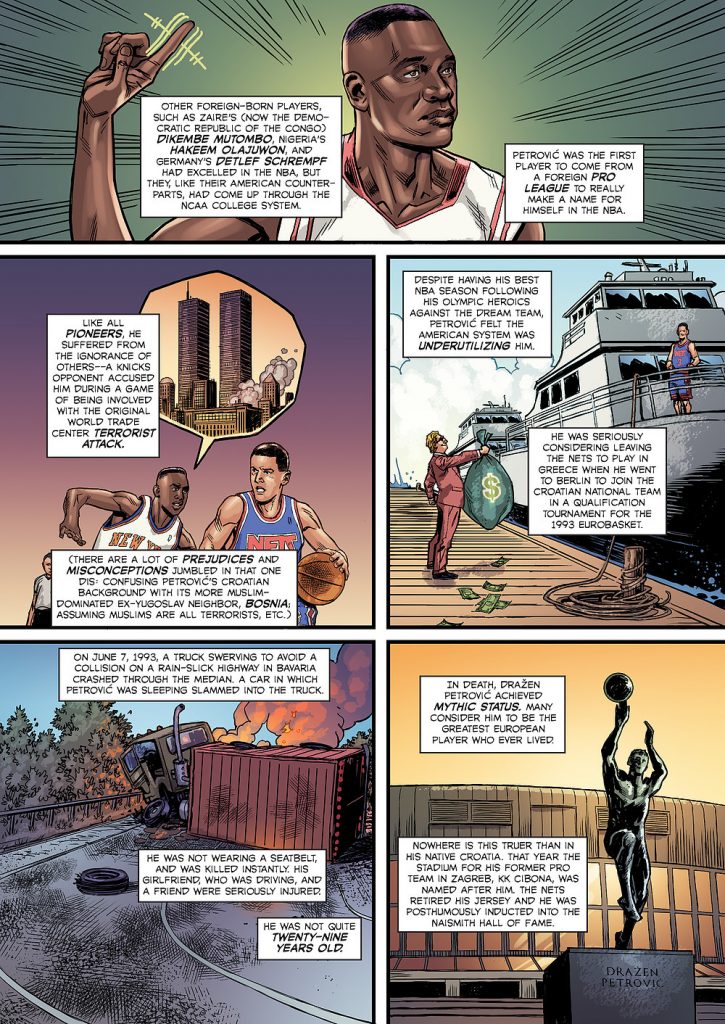 FS: Were there surprises that you tripped across as you prepared the book?

FVL: There were a lot of surprises, because I didn’t know all that much about the history of the game, more than the average modern fan. I had no idea how important the rival league, the ABA, was to the NBA, with the development of innovations like the three-point shot. I had no idea they used to do the tip-off after every shot, which just seems crazy to me! As crazy as today’s scores would be to the late 19th century fan: The score of the first ever game was 1-0, after all.

JC: My knowledge of the game prior to joining the team was that of an average fan. I was constantly surprised, enlightened, and entertained while drawing the book. The ABA era stuff was definitely a highlight.

FS: The book is gorgeous. How did you decide on the look of the book?

FVL: I asked Joe to come on board. The rest was easy.

JC: Thank you. I had an awesome script to work from, gorgeous color work from Dave Swartz and a great team at Ten Speed handling the graphic design.

FS: What other inspiration guided your hand when putting the book together?

FVL: You know, the book I kept thinking about was Ed Piskor’s HIP-HOP FAMILY TREE. I had a chance to chat with him at a signing of his here in Brooklyn and I was impressed with his modesty and love of the subject matter. There’s a lot of cultural crossover between hip-hop and basketball, obviously, so that was a touchstone too.

JC: For me, it was the Jack Davis Spaulding ads with Dr. J and Rick Berry that used to run on the back of every comic from my childhood. The double page splash in the book was my attempt at an homage to those ads.

FS: How did you decide what to throw the spotlight on when creating the book?

FVL: People like reading stories about other people. You’re never going to recreate the excitement of an NBA game in a book, even one that’s all pictures, so you need to focus on individual players’ stories on and off the court. There’s enough drama in the tales of the New York Rens, Babe Didrickson, Magic Johnson, the 1996 US Olympic women’s teams, Jordan, and so many others that rival any fictional comics story. 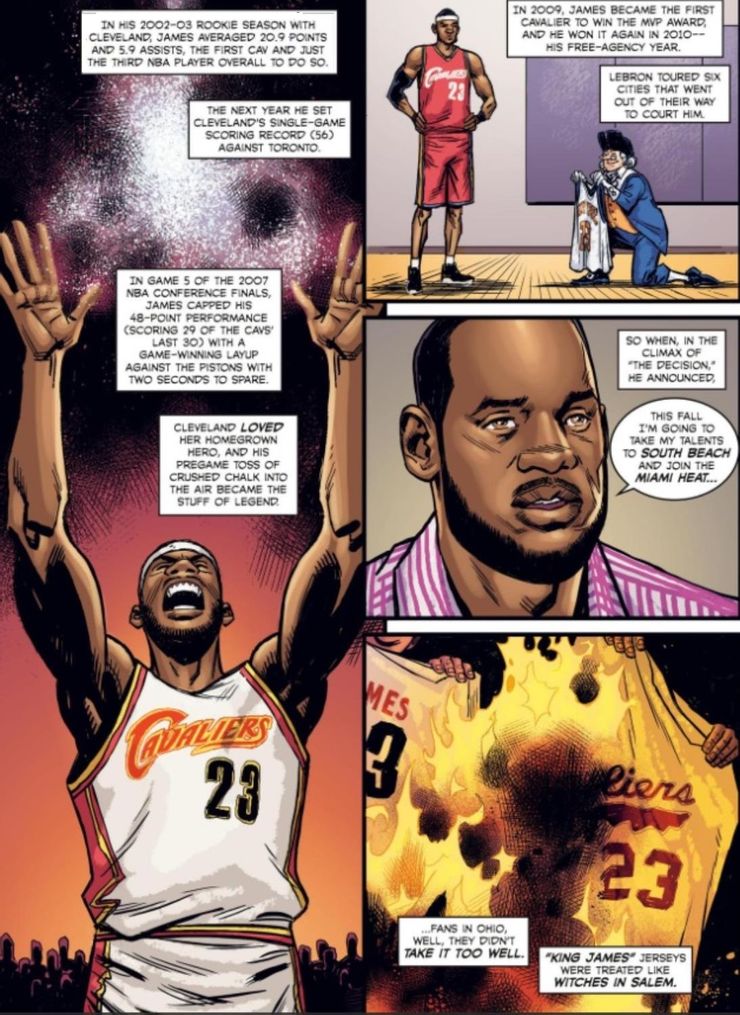 FS: Besides being entertained, what would you hope readers to take away from The Comic Book Story of Basketball?

FVL: Not to get too saccharine, but I think that hoops unites everyone, around the world, within the same unbroken hoop of basketball. The fact we can all come together around the same game shows that despite the efforts of others to divide, it’s easier than we think to come together for a common good.

JC: A truly global game for everyone. A game that at its core reflects some of best aspects of human nature. A game of unity, diversity, and inclusion. Be good to each other.

The Comic Book Story of Basketball: A Fast-Break History of Hoops is on sale now from Ten Speed Press.

A fast-break history of basketball–from its humble beginnings to its all-time great players–featuring engaging true tales from the court and vivid, dynamic illustrations.

Whether it’s millionaire pros facing off in an indoor arena full of screaming fans or a lone kid shooting hoops on an outdoor court, basketball is one of the most popular and widely played sports in the world. The Comic Book Story of Basketball gives you courtside seats to the history of hoops. It chronicles the sport from its beginnings in a YMCA in Massachusetts to its current status as a beloved international game for men and women of all ages. Learn the true stories behind the college game, the street game, the women’s game, and the international game, with legendary players and coaches like Dr. J, Michael Jordan, LeBron James, and Steph Curry profiled throughout.