Part of why post-apocalyptic yarns grip us so is not that we want to witness a world’s destruction, but, more importantly, to see a world’s renewal in the face of adversity. That’s just one of the themes that writer Fred Van Lente explores in the upcoming War Mother comic book miniseries, debuting this August from Valiant Entertainment. The series follows Ana, the eponymous War Mother, as she protects the people and the Grove, a sanctuary in the heart of the Amazon jungle.

Mr. Van Lente spoke with us recently about the conceit of War Mother, the relationship she has with her family and their future home, and what’s in store for a dying Grove. 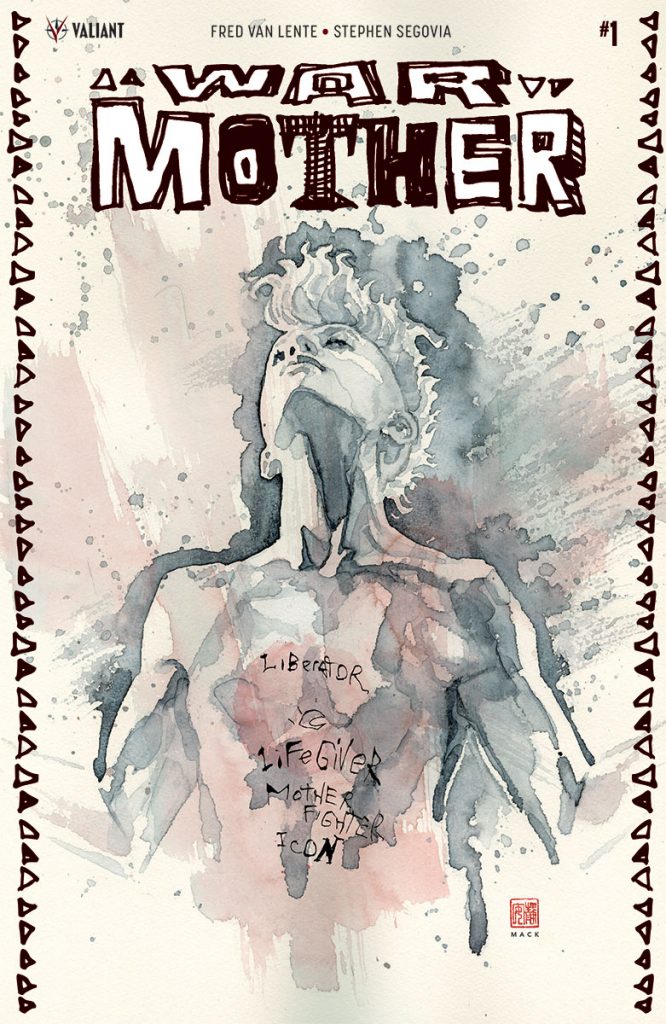 FreakSugar: For folks who might not be familiar with the character, what can you tell us about Ana, also known as War Mother?

Fred Van Lente: Ana is the War Mother, the protector of her village, the Grove, which is an oasis of peace in the green inferno that is the Amazon jungle of the far, far future. Her kids, her spouse and her people all depend on her to venture out into “The Breath of Jade,” as they call it, and bring back inorganic salvage they can’t grow themselves — oh, and fend off a constant attack by cannibal tribes, monsters, and murderous cyborgs. You know, the usual.

FS: The limited series picks up where the 4001 A.D.: War Mother one-shot left off. The solicitation for the book suggests that members of The Grove aren’t going to be enjoying the protection of their enclave for much longer. How equipped do you think the Grove’s residents are to handle what’s to come, given their insularity up to now?

FVL: Due to the events of the 4001 A.D. event, the Grove is dying — it’s a biomechanical environment that is decaying, fast. So Ana’s new task is to find her people a new home — and they receive a mysterious transmission from a high-tech apartment complex from before the fall of society that promises all the luxury and amenities anyone could require. It sounds too good to be true, so Ana heads into the jungle and into the vast, apparently empty complex and finds…

Oh, well that would be telling… 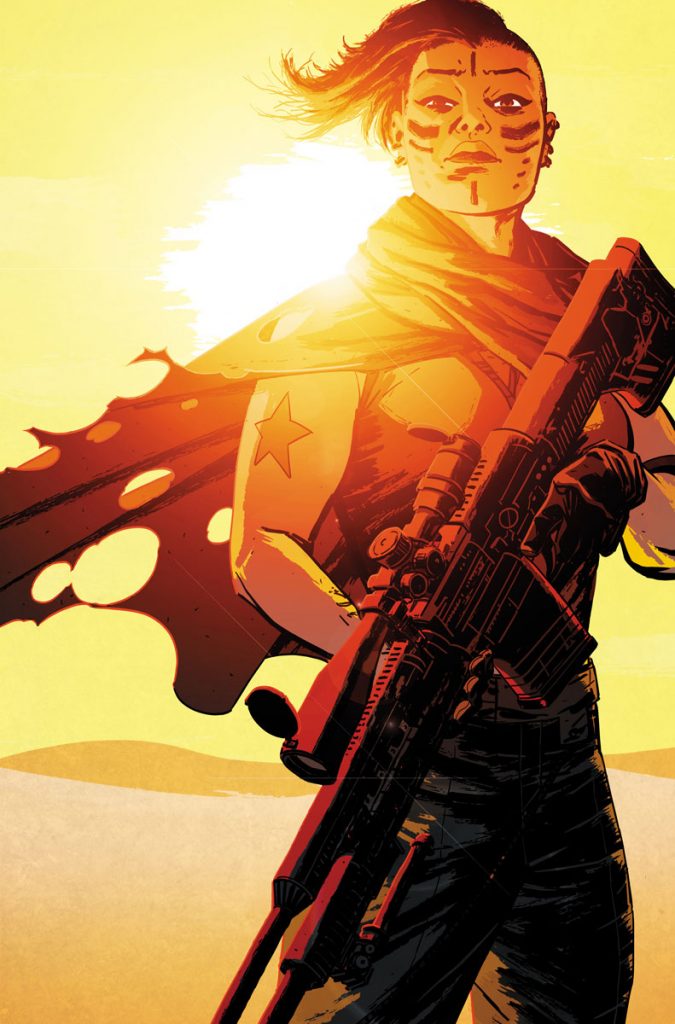 FS: Has there been a shift in their way of thinking since Ana brought in an outsider?

FVL: That outsider, Max, who is the genetically-engineered kid Ana rescued from the wreckage of New Japan in 4001 A.D., is an integral part of the new series. He has been adopted by Ana and her husband Ignacio and shows his devotion to his new family by aggressively defending Ana from all threats — I mean all threats. And he has a secret of his own that would horrify everyone were it to be found out … so you know that it is! That’s called drama.

FS: In the one-shot, we glean a bit about Ana’s past and personality. How do those factors influence why she puts herself out there with such fervor for The Grove?

FVL: Ana has a strong sense of duty to her tribe. She is also the person who killed the person who ruled the Grove before, directly contributing to their home’s decay. So she feels responsible and guilty about their predicament too. The last thing she wants to do is put her tribe in danger. So that’s why this particular mission means so much to her.

FS: One of my favorite bits from the one-shot is Ana’s relationship with Flaco, her sentient sniper rifle. How do you see Ana and Flaco influencing one another as the series progresses?

FVL: Yeah, Ana is Flaco’s War Mother just as he is her War Son, that’s where the terms come from. Their relationship is the main one in the whole series, definitely, and scary stuff happens when Ana encounters some new villains, The Cleansed, that have figured out a way to drive a wedge between her and Flaco. Things really become intense. 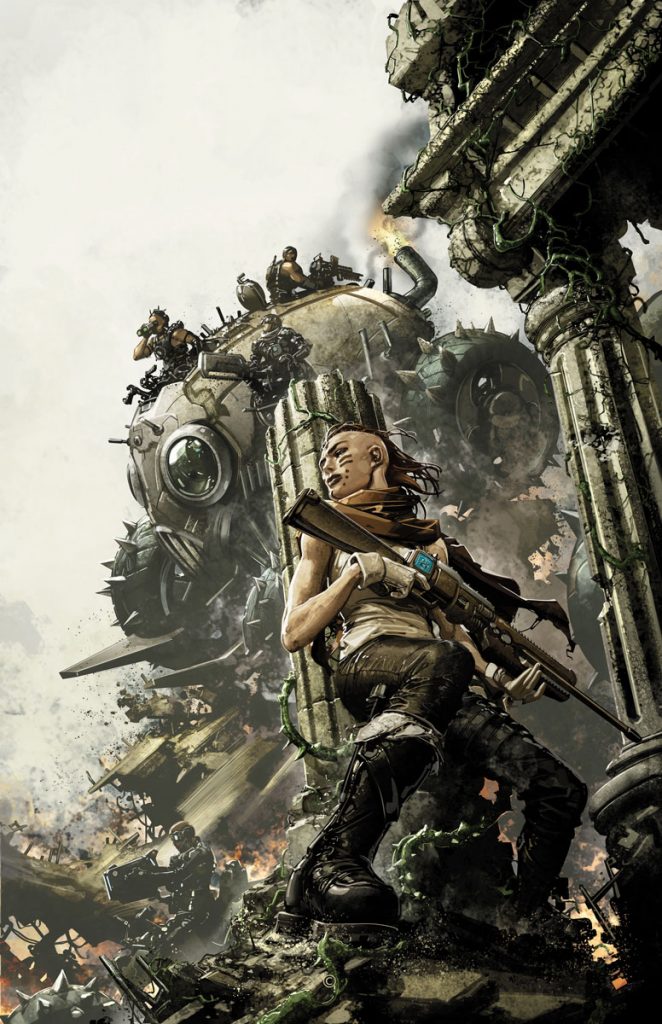 FS: There’s clearly a love of post-apocalyptic stories that shines through in the one-shot, although, as Ana points out, there’s just evolution. Some of the best stories of that genre, particularly the Mad Max series, carry that narrative thread of surviving and thriving or not. We live or we don’t. Is that one of the themes you’ll be exploring in the series?

FVL: It’s more about what survives and what doesn’t, I think, and what point do the requirements of survival force us to abandon our humanity, to the point where survival maybe isn’t worth it any more. What of the past can be preserved, and what needs to be left behind. That’s true of all great post-apocalyptic fiction and definitely a big part of War Mother, yeah. FS: The world in which War Mother and the people of The Grove inhabit feels incredibly fleshed out and we have an idea of what the place is like with the touchstones you’ve revealed so far. What’s the evolution of crafting the world of War Mother’s like? Do the characters influence the environment, the environment the characters, or a combination of the two?

FVL: Thanks! Yeah, it was really interesting to create. I was doing some work with Singularity University about future technologies and was fascinated by the idea of biomechanics, natural materials that mimics forms of nature. That’s where the structure of the Grove building comes from, and Flaco is symbiotic bio-tech that can meld directly to Ana.

What’s exciting about this new storyline is that Ana and Flaco are running into these bad guys, the Cleansed, who are kind of the exact opposite of the life and growth they represent. It’s when metaphorical opposites battle, that you get great genre stories, and I think fans of the genre will really be blown away by the War Mother series. I can’t wait!

Two millennia from today, Earth is not the hospitable home we once we knew. Ravaged by an endless onslaught of war, disaster, and time, the world is littered with desolate badlands, fortified kingdoms, and secretive enclaves where humanity still clings to life… Enclaves like The Grove – Earth’s last known repository of scientific knowledge and bioengineered prosperity. Now, under the leadership of the lone protector called WAR MOTHER and her sentient sniper rifle, the denizens of The Grove face a critical choice: remain where they are and die, or find a new land and flourish. Can War Mother lead her people out of isolation and reignite the fires of a dying planet? And even if she can locate the distant citadel she seeks, can she fight back the horrors and perverse monstrosities that lurk just beyond her doorstep?

In the footsteps of RAI and BOOK OF DEATH, raw power meets tribal warfare as Fred Van Lente & Stephen Segovia forge a modern myth of the near future through the fire-tempered frontier of 41st century Earth for Valiant’s next stunning science-fiction showdown!