Happy holidays! While we all love some of the typical holiday film and TV staples of the season, there are options a’plenty for fans of superheroes and their derring-do. If you’re looking for a winter holiday film that has its roots in the four-colored world of comics, check out the offerings on this rundown list!

Iron Man 3 is low-key the best film in the Iron Man franchise. While the first outing may have given us the initial appearance of Robert Downey, Jr.‘s turn as the golden Avenger, by the time we get to the third installment, we have a more well-rounded Tony Stark who is a more dynamic character with more nuance and depth. While the movie is set during Christmas, what else qualifies it as a holiday film? Aside from being directed by Shane Black–the king of films set at or around Christmas–Iron Man 3 features a Tony who is reflecting on his year, as we are wont to do during this time of year, and coping with where his path lies going forward. He reflects on the past (namely the Battle of New York and the threat of Aldrich Killian) and slowly grapples with what he wants his life to look like, especially with his paramour Pepper Potts. And Tony has adventures with a precocious kid to stop the bad guys. What more could you want?

Like Iron Man 3, Batman Returns is all about connections, this time with the spotlight on Batman and Catwoman. Both, at least momentarily, see the other as lifelines to pull themselves out of the isolated spaces in which they find themselves. Bruce wonders if there’s a life outside of Batman and Selina ponders whether she can move past her trauma. The outcomes are mixed and filled with a cascade of emotion, and if that doesn’t scream the holidays, what does? And hey, it’s set at Christmas with a little golem of a Penguin attempting to ruin the day by pulling a reverse Nativity and stealing all the first-born children of Gotham City (think the plagues from the biblical book of Exodus, but with snow).

The Disney+ series focuses on the lovable archer and his investigation of ghost from his past as the vigilante Ronin, Again, the holidays are often about wrestling with our past choices and how they impact our futures, and Clint Barton is no different. All the while, Hawkeye is attempting to put a bow on the caper in order to get home in time for Christmas AND deal with Kate Bishop, a arrow-shooting protege who has latched on to Clint in hopes he can be her mentor. In addition, he contends with the machinations of The Kingpin, who’s kind-of-sort-of an evil King Herod type, right? Okay, the last one is a stretch, but, that aside, Hawkeye is perfect, bingeable holiday fare.

The Guardians of the Galaxy Holiday Special

It was announced a while back that The Guardians of the Galaxy Holiday Special would be dropping on Disney+ toward the end of the is year, just in time for the holiday season. Despite Guardians‘ steward James Gunn‘s involvement, there was no real idea what the plot would look like, let alone how much heart it would be brimming with. Guardians member Mantis wants to give Star-Lord/Peter Quill a proper and fun Christmas like those he had on Earth as a child. Between the holidays and still mourning the loss of Gamora, he’s not been in the best of spirits, but Mantis has a plan: she and Drax will travel to Earth to bring Peter his childhood hero, Kevin Bacon. While this could have been a throwaway Christmas tale, the special is so touching and poignant, as well as moves along the plot of the Guardians mythos in interesting and touching ways (which we won’t spoil here). And the soundtrack–along with seeing Bacon perform? Baller.

Spider-Man: Into the Spider-Verse

Okay, technically Spider-Man: Into the Spider-Verse doesn’t explicitly indicate it takes place on or near any of the winter holidays, but we do see snow early on in Miles Morales‘ universe, so it might. Further, one of the Spider-Men mentions his very own Christmas album titled “A Very Spidey Christmas,” which Sony has actually released, which, no joke, has some bangers. So, we’re calling it: Into the Spider-Verse counts as a holiday film. And seeing how its sequel, Across the Spider-Verse, hits theaters in 2023, do you really need another reason to revisit this top-tier Spider-film?

Technically, both He-Man and She-Ra have appeared in comics, and they’re superheroes, so this counts. Is this great? No, but it’s quaint and is drenched in nostalgia for folks of a certain age. Two Earth kids teach the evil Skeletor about Christmas spirit and it’s implied that those same kids give Orko the rundown on the story of the Nativity. 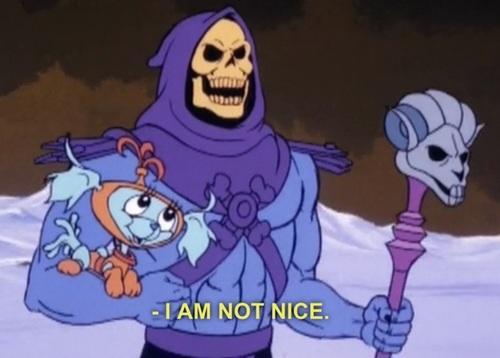 Also, if nothing else, the special gave us the “I am not nice” Skeletor meme, so that’s a check in plus column.

We hope you have a wonderful holiday season, however you choose (or don’t choose) to observe. Thank you for sticking with us and being the loyal readers that you are and we’ll see you in 2023!