If you’ve seen Guardians of the Galaxy already, you’ll know that the post-credits scene had a rather unexpected appearance by Howard the Duck hanging out in the menagerie of the Collector. Yes, THAT Howard the Duck, the one who starred in his own eponymous feature film back in 1986, featuring a clearly strapped-for-cash Lea Thompson and Tim Robbins and directed by “Let’s burn some money” George Lucas. But whereas the 1980s movie adaptation of the Marvel Comics character created by Steve Gerber was decked out in sunglasses and was an abomination to the Lord Thy God, Howard’s appearance in Guardians actually gave the martini-sipping, acerbic duck his due. 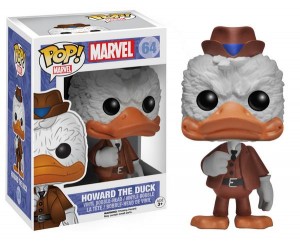 Funko Toys recognizes that this could signal a resurgence of the cult of Howard and will be releasing its very own Howard the Duck bobble-head! Donning his trademark brown suit and hat, Howard’s posture says he’s ready to swagger back into the spotlight, while the grimace on his face clearly reads “Fuck you, George Lucas.”

The announcement came from Ryan Penagos on his @AgentM Twitter feed Monday. He made a similar announcement for the production of Funko’s Dancing Groot figurine last week.

Created in 1973, Howard the Duck eventually starred in his own Marvel comic book, taking on such topics as sexual politics and countercultural ideas of the day. The title was even used to sometimes poke fun at Marvel Comics itself.

Although we don’t know exactly when the Funko Howard the Duck figure will see realease, other than “soon,” Penagos does say that it will be included in the same assortment as the Dancing Groot. Keep your eyes open and check out Funko’s official site for more developments. While you wait for both figures, watch this embarrassing trailer for the 1986 Howard the Duck feature film and try not to look away.